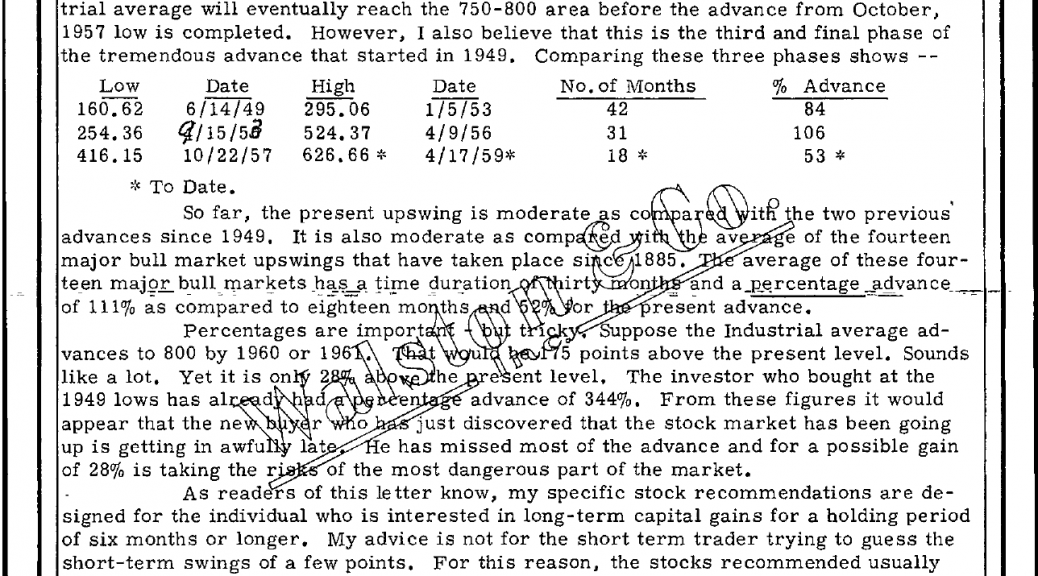 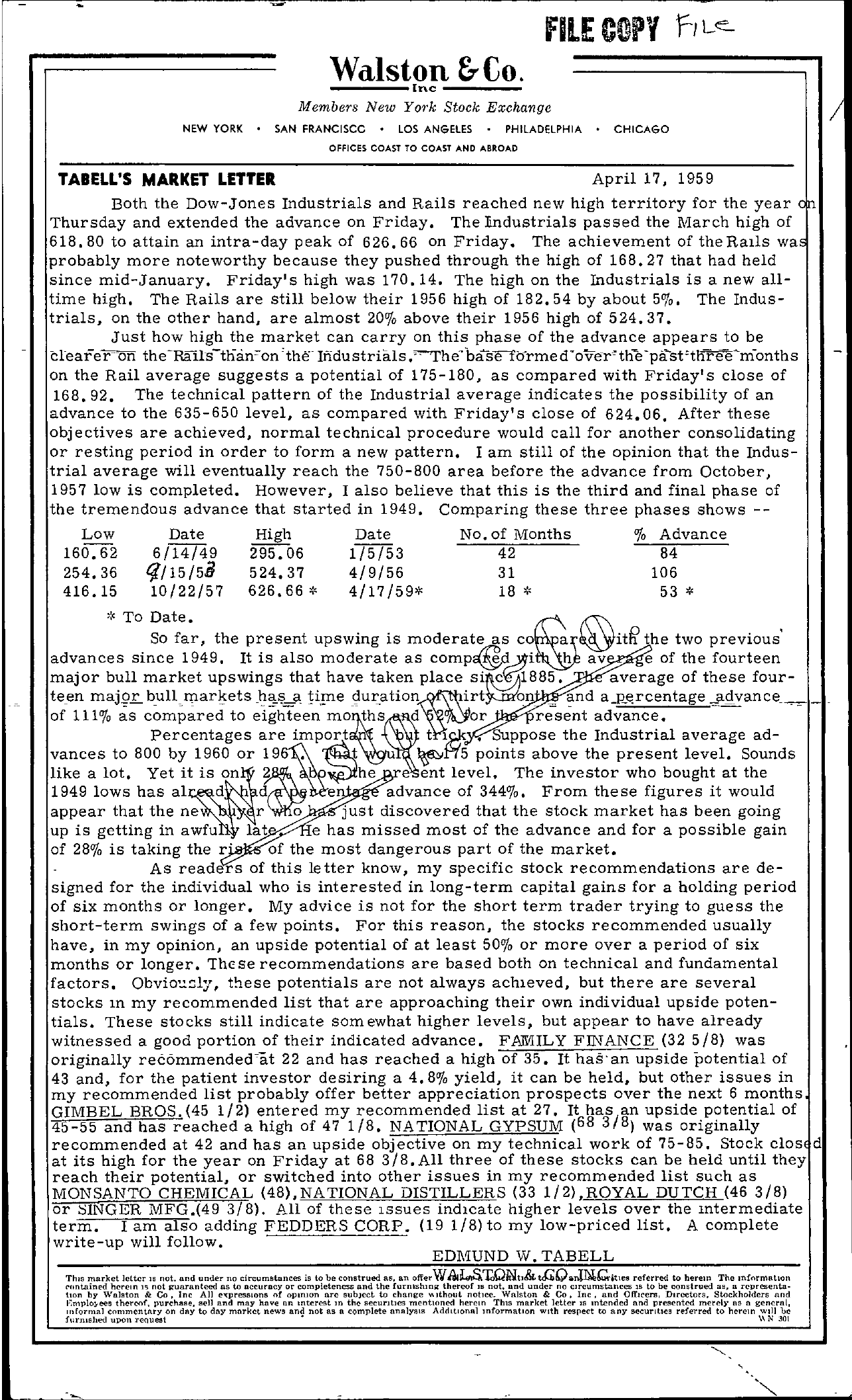 FILE COpy h Walston &Co. Inc—- Members New yo,'k Stock Exchange NEW YORK SAN FRANCISCC LOS ANGELES PHILADELPHIA CHICAGO OFFICES COAST TO COAST AND ABROAD TABEll'S MARKET LETTER April 17, 1959 Both the Dow-Jones Industrials and Rails reached new high territory for the year Thursday and extended the advance on Friday. The lindustrials passed the March high of 618.80 to attain an intra-day peak of 626.66 on Friday. The achievement of the Ralls wa probably more noteworthy because they pushed through the high of 168.27 that had held since mid-January. Friday's high was 170.14. The high on the Industrials is a new all- time high. The Rails are still below their 1956 high of 182.54 by about 50/0. The Indus- trials, on the other hand, are almost 200/0 above their 1956 high of 524.37. Just how high the market can carryon this phase of the advance appears to be Clearer–on the-Rails-tnan'on 'the Industrials. d past'tIlree-m-onths on the Rail average suggests a potential of 175-180, as compared with Friday's close of 168.92. The technical pattern of the Industrial average indicates the possibility of an advance to the 635-650 level, as compared with Friday's close of 624.06. After these objectives are achieved, normal technical procedure would call for another consolidating or resting period in order to form a new pattern. I am still of the opinion that the Indus- trial average will eventually reach the 750-800 area before the advance from October, 1957 low is completed. However, I also believe that this is the third and final phase of the tremendous advance that started in 1949. Comparing these three phases shows Low 160.62 254.36 416.15 Date 6/14/49 C//15/56 10/22/57 High 295.06 524.37 626.66 Date 1/5/53 4/9/56 4/17/59 No. of Months 42 31 18 Advance 84 106 53 ; To Date. So far, the present upswing is moderate as co a the two previous' advances since 1949. It is also moderate as h av e of the fourteen major bull market upswings that have taken place average of these four- teen bullmarets ti,!Ile rtynron and of 1110/0 as compared to eighteen Percentages are import or resent advance. t 1 Suppose the Industrial average ad- vances to 800 by 1960 or points above the present level. Sounds like a lot. Yet it is on e ent level. The investor who bought at the 1949 lows has al d d e advance of 3440/0. From these figures it would appear that the ne r0 just discovered that the stock market has been going up is getting in awfu lat e has missed most of the advance and for a possible gain of 280/0 is taking the r' of the most dangerous part of the market. As readers of this letter know, my specific stock recommendations are de- signed for the individual who is interested in long-term capital gains for a holding period of six months or longer. My advice is not for the short term trader trying to guess the short-term swings of a few pOints. For this reason, the stocks recommended usually have, in my opinion, an upside potential of at least 500/0 or more over a period of six months or longer. ThEse recommendations are based both on technical and fundamental factors. Obvio'.!ly, these potentials are not always achleved, but there are several stocks m my recommended list that are approaching their own individual upside poten- tials. These stocks still indicate somewhat higher levels, but appear to have already witnessed a good portion of their indicated advance. FAlHILY FINANCE (32 5/8) was originally recommended-at 22 and has reached a high of 35. It has'an upside potential of 43 and, for the patient investor desiring a 4.8 yield, it can be held, but other issues in my recommended list probably offer better appreciation prospects over the next 6 months GIMBEL BROS.(45 1/2) entered my recommended list at 27. It has/an upside potential of 45-55 and has reached a high of 47 1/8. NATIONAL GYPSUM (68 3 8) was originally recommended at 42 and has an upside objective on my technical work of 75-85. Stock clos d at its high for the year on Friday at 68 3/8. All three of these stocks can be held until they reach their potential, or switched into other issues in my recommended list such as MONSANTO CHEMICAL (48),NATIONAL DISTILLERS (33 1/2),ROYAL DUTCH (463/8) or lINGER MFG.(49 3/8). All of these lssues indlcate higher levels over the mtermediate term. I am also adding FEDDERS CORP. (19 1/8)to my low-priced list. A complete write-up will follow. EDMUND W. TABELL WThIS market letter 15 not. and under no circumstances is to be construed as, an offer uGQaJMCitles referred to herein The Inform(l.llOn C'nntained herein I'; not guaranteed as to accuracy or completeness and the furnishIng thereof IS not. nnd under no Clfcumstancl!S IS to be construed as, a representa- hon by 'alston & Co. Inc All e'(presslOns of OpInion arc subject to change \Hthout not1CC Walston & Co. Inc, and Officers, Directors, Stockholders and IIlrormaJ thereof, purchase, commentary on day stoelldaayndmmarakyethnavewe sananmd terest m not as a the securltJcs mentlOned herein ThIS market letter lS mtended complete analYllls Additional mformatJon With respect to any and presented merei)i- ns a general, secuntH!S referred to herem WIll be fllrmshed upon r e q u e s t ' \\ N 301 ,