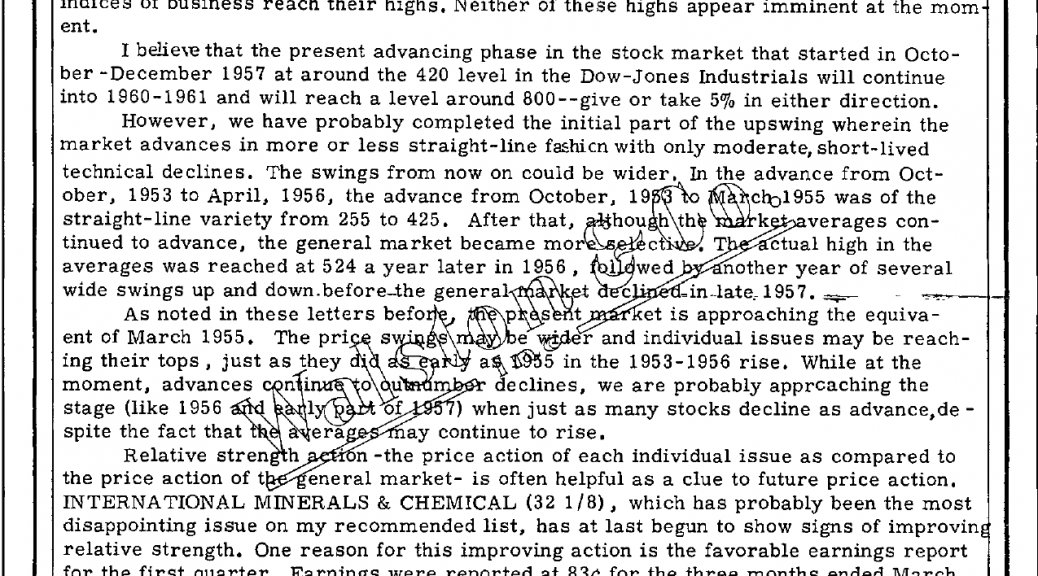 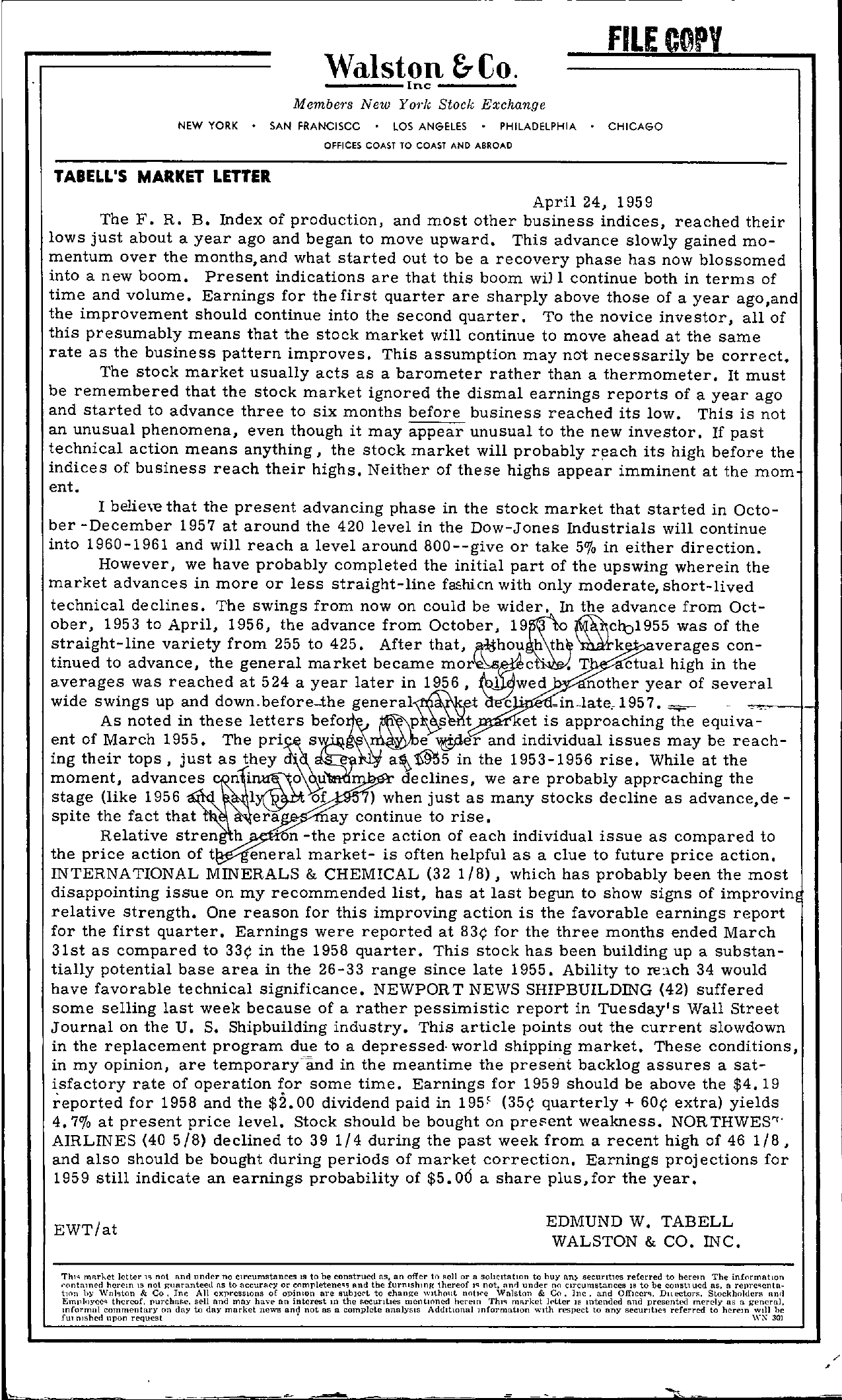 Walston &Co. Inc Members New YOk Stock Exchange FILE QPY NEW YORK SAN FRANCISCC LOS ANGELES PHILADELPHIA CHICAGO OFFICES COAST TO COAST AND ABROAD TABELL'S MARKET LETTER April 24, 1959 The F. R. B. Index of production, and most other business indices, reached their lows just about a year ago and began to move upward. This advance slowly gained mo- mentum over the months,and what started out to be a recovery phase has now blossomed into a new boom. Present indications are that this boom wi) 1 continue both in terms of time and volume. Earnings for the first quarter are sharply above those of a year ago,and the improvement should continue into the se cond quarter. To the novice inve stor, all of this presumably means that the stock market will continue to move ahead at the same rate as the business pattern improves. This assumption may not necessarily be correct. The stock market usually acts as a barometer rather than a thermometer. It must be remembered that the stock market ignored the dismal earnings reports of a year ago and started to advance three to six months before business reached its low. This is not an unusual phenomena, even though it may appear unusual to the new investor. If past technical action means anything, the stock market will probably reach its high before the indices of business reach their highs. Neither of these highs appear imminent at the mom ent. I believe that the present advancing phase in the stock market that started in Octo- ber – December 1957 at around the 420 level in the Dow-Jones Industrials will continue into 1960-1961 and will reach a level around 800–give or take 5 in either direction. However, we have probably completed the initial part of the upswing wherein the market advances in more or less straight-line with only moderate, short-lived technical declines. The swings from now on could be wider. In the advance from Oct- ober, 1953 to April, 1956, the advance from October, was of the straight-line variety from 255 to 425. After that, h th 'tiJkk verages con- tinued to advance, the general market became T ctual high in the averages was reached at 524 a year later in 1956, wide swings up and down.before-the I wed c' , in- nother year late.. 1957. -of se.ver,,a,.,.l 1 As noted in these letters et is approaching the equiva- ent of March 1955. The ing their tops, just as they . and individual issues may be reacha\155 in the 1953-1956 rise. While at the moment, advances n u declines, we are pro.bably apprcaching the stage (like 1956 of ) when just as many stocks decline as advance,de- spite the fact that era ay continue to rise. Relative stren h . n -the price action of each individual issue as compared to the price action o.f t eneral market- is often helpful as a clue to. future price action. INTERNATIONAL MINERALS & CHEMICAL (32 1/8), which has probably been the most disappointing issue on my recommended list, has at last begun to show signs of impro.vin relative strength. One reason fo.r this improving action is the favorable earnings report for the first quarter. Earnings were reported at 83 for the three months ended March 31st as compared to 33 in the 1958 quarter. This stock has been building up a substan- tially potential base area in the 26-33 range since late 1955. Ability to. relch 34 would have favo.rable technical Significance. NEWPORT NEWS SHIPBUILDING (42) suffered some selling last week because of a rather pessimistic report in Tuesday's Wall Street Journal on the U. S. Shipbuilding industry. This article points out the current slowdown in the replacement pro.gram due to. a depressed world shipping market. These conditions, in my opinion, are temporaryand in the meantime the present backlog assures a sat- isfactory rate of operation for so.me time. Earnings for 1959 sho.uld be above the 4.19 reported for 1958 and the 2.00 dividend paid in 195' (35 quarterly 60 extra) yields 4.7 at present price level. Stock should be bought on pref'ent weakness. NOR THWESr,. AIRLINES (405/8) declined to. 39 1/4 during the past week fro.m a recent high of 46 1/8, and also should be bo.ught during periods of market correction. Earnings pro.jections for 1959 still indicate an earnings probability of 5.00 a share plus,for the year. EWT/at EDMUND W. TABELL WALSTON & CO. INC. Th! letter I'; not and under no Circumstances 19 to be construed as, an offer to lIell or a soliCitatIOn to buy an) SCCUrlt1(,'S referred to herein The information .'ontnm(l1 herem IS not guaranteed as to accuracy or and the furnlshmg thereof '1 not. nna under no Circumstances IS to be constl ued ns, n rellrC'Icntn- tlon 1\). Vlnhton & Co, Inc All expreSSIOns of opinIon are subc('t to WIthout notwc WlIlston & Co, Inc, and OffIcer'!, Dlteetor!;, Stockholders find thereof, purchfl!;C', sell nnd mlly have lin intllrest 10 the !;CCUrltIes mentIOned herem Thl'! mllrkct f'Lter IS mtended nnd presented merely as a general, 1Oformul commentary on day to day market ne\\!! and not as a complete analySIS AddItIonal mformatlOn WIth respect to Ilny referred to herem WIll he fUI nlshed upon r e q u e s t ' OX 30 /