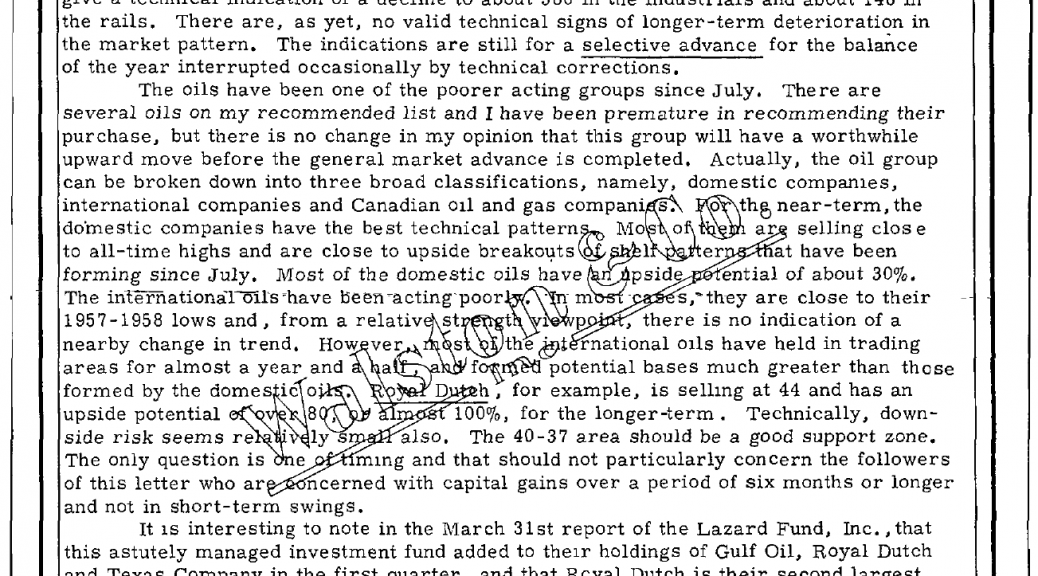 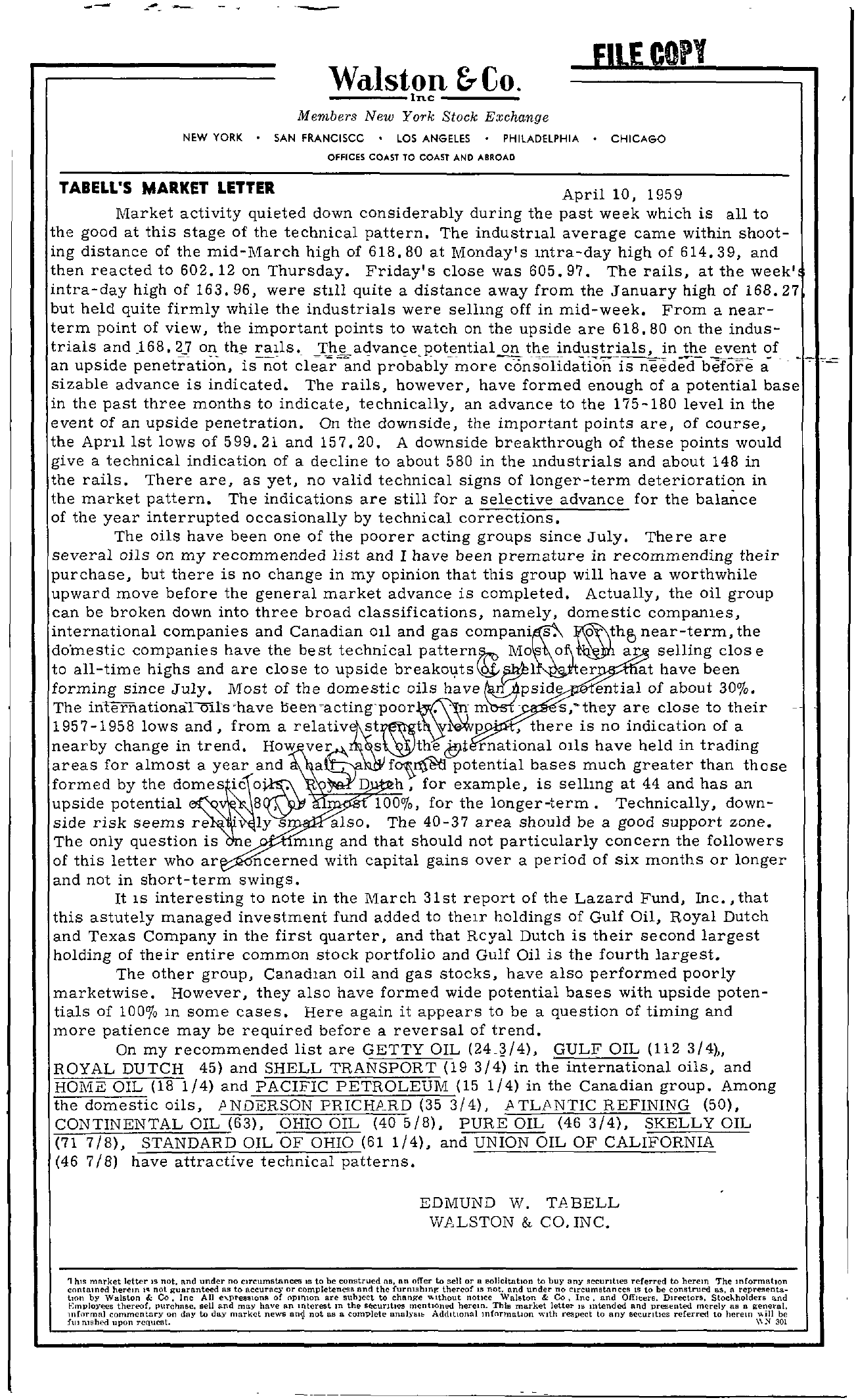 — — W—–a–l-s-tIoncn—&–C—o. Members New York Stock Exchange Opy NEW YORK SAN FRANCISCC LOS ANGELES PHILADELPHIA CHICAGO OFFICES COAST TO COAST AND ABROAD TABEll'S MARKET lETTER April 10, 1959 Market activity quieted down considerably during the past week which is all to the good at this stage of the technical pattern. The industnal average came within shoot- ing distance of the mid-March high of 618.80 at Monday's mtra-day high of 614.39, and then reacted to 602.12 on Thursday. Friday's close was 605.97. The rails, at the week' intra-day high of 163.96, were still quite a distance away from the January high of 168.27 but held quite firmly while the industrials were sellmg off in mid-week. From a near- term point of view, the important points to watch on the upside are 618.80 on the indus- trials and J68. 2J on the ralls. The advance. potential on the industrials, in the event of a ..an upside penetration, is-not clear-and probably-more cons'olidalioh-is needed-before -.,..– sizable advance is indicated. The rails, however, have formed enough of a potential base in the past three months to indicate, technically, an advance to the 175-180 level in the event of an upside penetration. On the downside, the important points are, of course, the Aprlilst lows of 599.21 and 157.20, A downside breakthrough of these points would give a technical indication of a decline to about 580 in the mdustrials and about 148 in the rails. There are, as yet, no valid technical signs of longer-term deterioration in the market pattern. The indications are still for a selective advance for the balance of the year interrupted occasionally by technical corrections. The oils have been one of the poorer acting groups since July. The re are several oils on my recommended list and I have been premature in recommending their purchase, but there is no change in my opinion that this group will have a worthwhile upward move before the general market advance is completed, Actually, the oil group can be broken down into three broad classifications, namely, domestic companles, international companies and Canadian 011 and gas near-term, the do'mestic companies have the best technical Mo 0 ar selling clos e to all-time highs and are close to upside er at have been form!ng since , Most the d0r'eStic oils have ential of about 300/0 The mternahonal are close to thelr .- 1957-1958 lows and, from a nearby change in trend. How d91 ,there is no indication of a rnational olls have held in trading areas for almost a year and a potential bases much greater than those formed by the ic D h, for example, is sellmg at 44 and has an upside potential 1000/0, for the longer-term, Technically, down- side risk seems re . ly s also. The 40-37 area should be a good support zone. The only question is e mmg and that should not particularly concern the followers of this letter who ar ncerned with capital gains over a period of six months or longer and not in short-term swings. It lS interesting to note in the March 31 st report of the Lazard Fund, Inc., that this astutely managed investment fund added to then holdings of Gulf Oil, Royal Dutch and Texas Company in the first quarter, and that Rcyal Dutch is their second largest holding of their entire common stock portfolio and Gulf Oil is the fourth largest. The other group, Canadlan oil and gas stocks, have also performed poorly marketwise. However, they also have formed wide potential bases with upside poten- tials of 1000/0 m some cases. Here again it appears to be a question of timing and more patience may be required before a reversal of trend. On my recommended list are GETTY OIL GULF OIL (112 3/4) ROYAL DUTCH 45) and SHELL TRANSPORT (19 3/4) in the international oils, and HOME OIL (18 1/4) and PACIFIC PETROLEUM (15 1/4) in the Canadian group. Among the domestic oils, PNDERSON PRICHP.RD (35 3/4), P-TLPNTIC REFINING (50), CONTINENTAL OIL (63), OHIO OIL (40 5/8), PURE OIL (46 3/4), SKELLY OIL (71 7/8), STANDARD OIL OF OHIO (61 1/4), and UNION OIL OF CALIFORNIA (46 7/8) have attractive technical patterns. EDMUND W. TABELL WALSTON & CO. INC. 1 hIS market letter IS not. Rnd under no Clrcumstanc(! IS to be construed us, an offer to sell or u solicitation to buy any securlttes referred to herem The infOrmation conttllned herem 1'1 not guaranteed IlS to accuracy or completeness and the furOlshmg thereof 15 not. and under no Circumstances 15 to be construed IlS, II. representa- tIOn by Walston & Co. Ine All '….presslOnll of oPinIOn are subJect to change ,Ithout notice Walston & Co, Inc. Ilnd Officers. Directors, Stockholders and thereof, purchnse, sell Ilnd may have an Interest lTI the Sf!eUrJtJes mentIoned herelO. This market letter IS mtended nnd presented m(!reiy as n general. mformnJ commentary on dny to dllY market news nnd not IlS 0. complete Addltlonnlmformntlon With respect to any seeurlties referred to herem v.ill be f\1I nlshed upon r e q u e s t . ' \\;- 30l