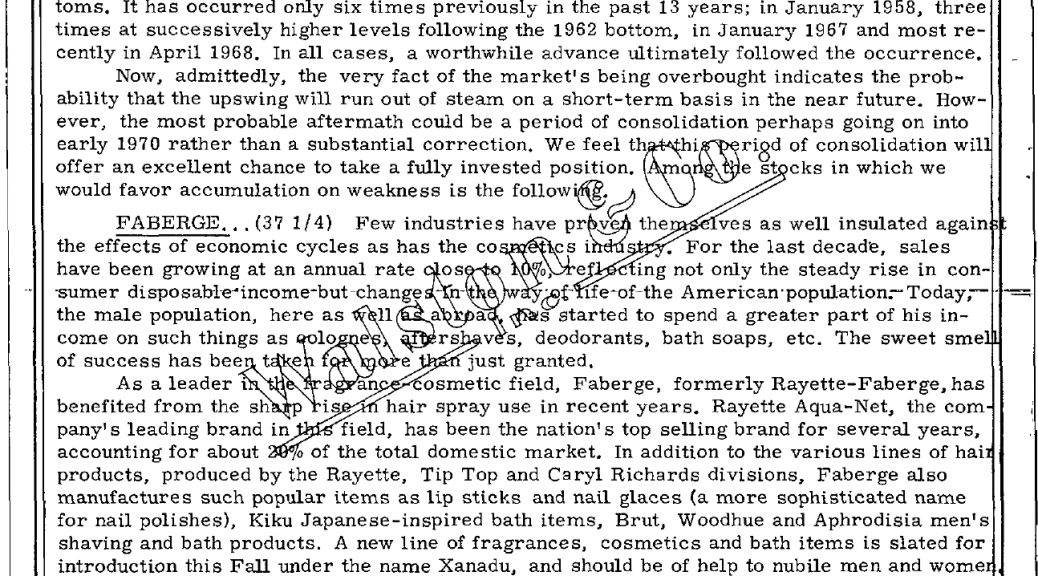 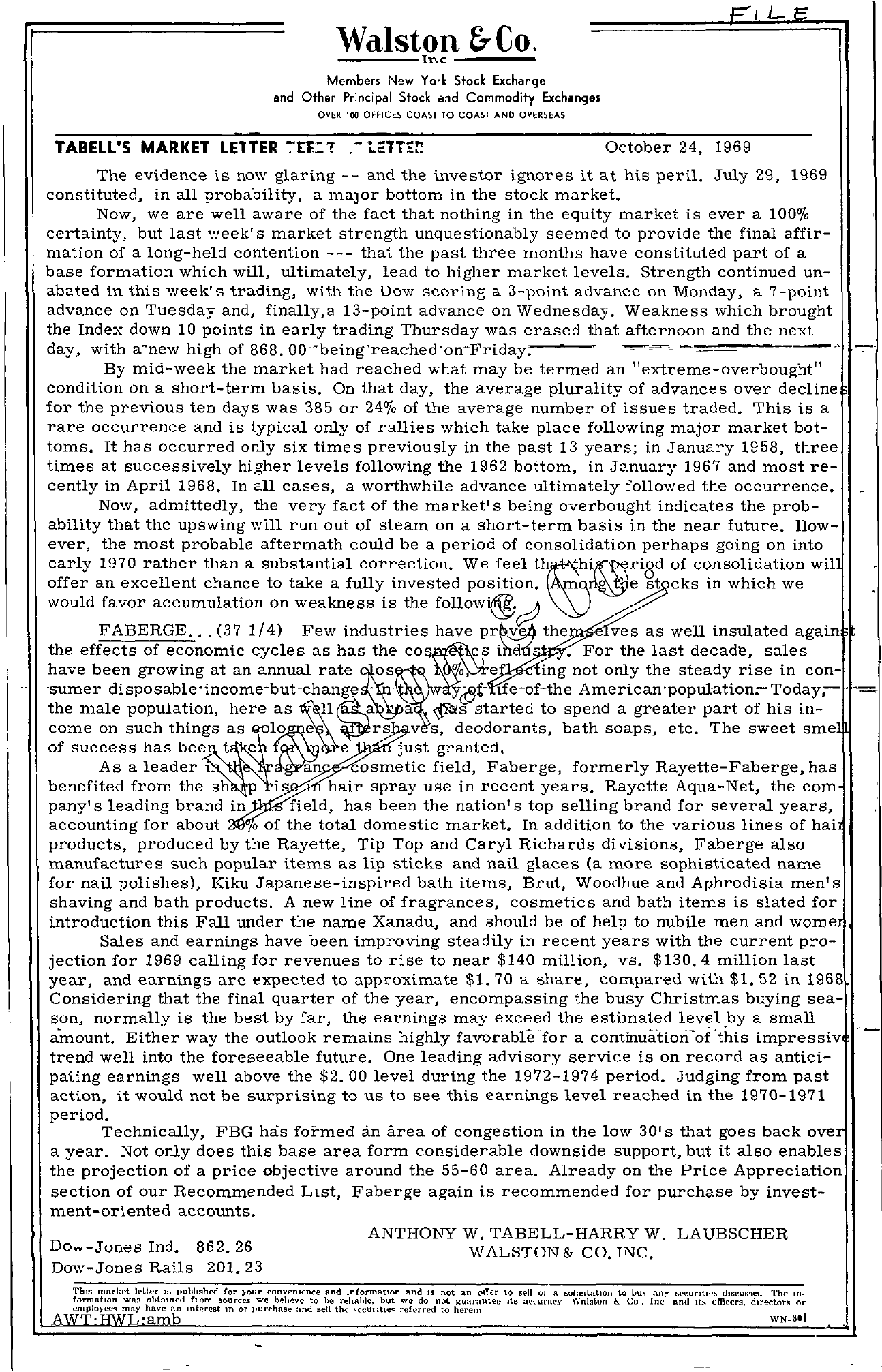 Walston &- Co. lnc – – – – – Members New York Stock Exchange and Other Principal Stock and Commodity Exchange. OVER 100 OFFICES COAST TO COAST AND OVERSEAS TABELL'S MARKET LETTER 7rfr – i..Eln October 24, 1969 The evidence is now glaring — and the investor ignores it at his peril. July 29, 1969 constituted, in all probability, a major bottom in the stock market. Now, we are well aware of the fact that nothing in the equity market is ever a 100 certainty, but last week's market strength unquestionably seemed to provide the final affir- mation of a long-held contention — that the past three months have constituted part of a base formation which will, ultimately, lead to higher market levels. Strength continued un- abated in this week's trading, with the Dow scoring a 3-point advance on Monday, a 7-point advance on Tuesday and, finally,a 13-point advance on Wednesday. Weakness which brought the Index down 10 points in early trading Thursday was erased that afternoon and the next day, with anew high of 868. By mid-week the market had reached what may be termed an extreme-overbought condition on a short-term basis. On that day, the average plurality of advances over decline for the previous ten days was 385 or 24 of the average number of issues traded. This is a rare occurrence and is typical only of rallies which take place following major market bot- toms. It has occurred only six times previously in the past 13 years; in January 1958, three times at successively higher levels following the 1962 bottom, in January 1967 and most re- cently in April 1968. In all cases, a worthwhile advance ultimately followed the occurrence. Now, admittedly, the very fact of the market's being overbought indicates the prob- ability that the upswing will run out of steam on a short-term basis in the near future. How- ever, the most probable aftermath could be a period of consolidation perhaps going on into early 1970 rather than a substantial correction. We feel offer an excellent chance to take a fully invested position. of consolidation wil st cks in which we would favor accumulation on weakness is the FABERGE … (37 1/4) Few industries have prpyE;4. the ves as well insulated again the effects of economic cycles as has the c02s . For the last decad'e, sales have been growing at an annual rate -sumer disposableincome-but-change – n- —-0, e ing not only the steady rise in con- (CJf- lie-of-the American-population;-Today;- the male population, here as a started to spend a greater part of his in- come on such 15ie of success has bee t e e v s, deodorants, bath soaps, etc. The sweet sme just granted. As a leader 1 benefited from the sh an cosmetic field, Faberge, formerly Rayette-Faberge, has is hair spray use in recent years. Rayette Aqua-Net, the com pany's leading brand in field, has been the nation's top selling brand for several years, accounting for about 0 of the total domestic market. In addition to the various lines of hai products, produced by the Rayette, Tip Top and Caryl Richards divisions, Faberge also manufactures such popular items as lip sticks and nail glaces (a more sophisticated name for nail polishes), Kiku Japanese-inspired bath items, Brut, Woodhue and Aphrodisia men's shaving and bath products. A new line of fragrances, cosmetics and bath items is slated for introduction this Fall under the name Xanadu, and should be of help to nubile men and wome Sales and earnings have been improving steadily in recent years with the current pro- jection for 1969 calling for revenues to rise to near 140 million, vs. 130.4 million last year, and earnings are expected to approximate 1. 70 a share, compared with 1. 52 in 1968 Considering that the final quarter of the year, encompassing the busy Christmas buying sea- son, normally is the best by far, the earnings may exceed the estimated level by a small a-mount. Either way the outlook remains highly favorable-for a continuation-of-this impressiv — trend well into the foreseeable future. One leading advisory service is on record as antici- pa-Ling earnings well above the 2.00 level during the 1972-1974 period. Judging from past action, it would not be surprising to us to see this earnings level reached in the 1970-1971 period. Technically, FBG has formed an area of congestion in the low 30' s tllat goes back over a year. Not only does this base area form considerable downside support, but it also enables the projection of a price objective around the 55-60 area. Already on the Price Appreciation section of our Recommended List, Faberge again is recommended for purchase by invest- ment-oriented accounts. Dow-Jones Ind. 862.26 Dow-Jones Rails 201.23 ANTHONY W. TABELL-HARRY W. LAUBSCHER WALSTON & CO. INC. This mnrket letter 18 published for Jour convemence and InformatIOn Hl1d IS not an offr to sell or n soliCitatIOn to bu any secuntles dlSCUSqed The m- fonnatlOn was obtamed flom sources we helleve to be rehahle, but we do not guarantee Its a'CUrRcy \Vnlston lL Co. Inc anll lb, officers. directors or cmplo)cc'l may have Rn mterest In or pUl'lhltSl' and set! the 'amb referred to herem WNsol