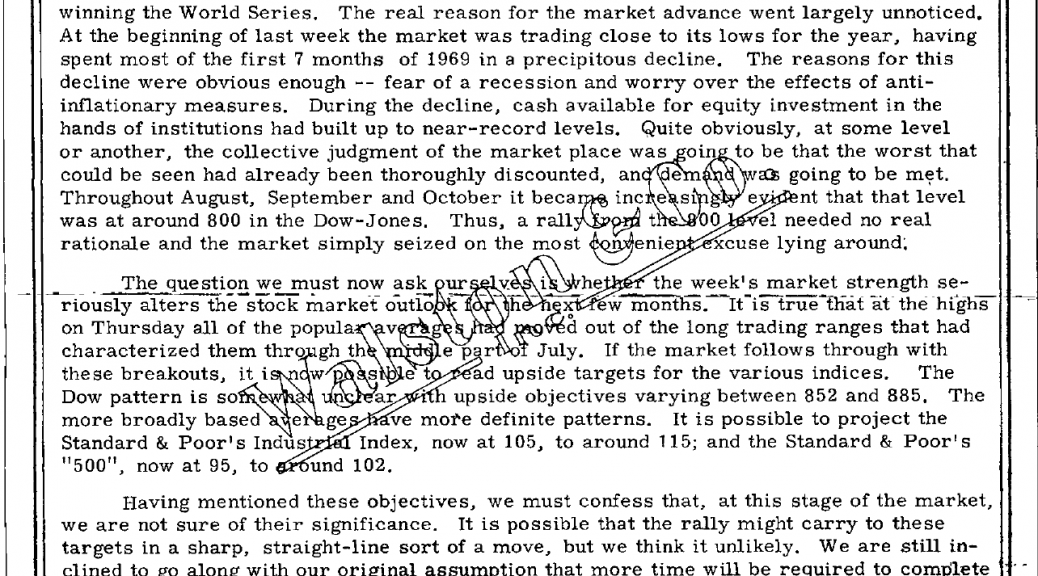 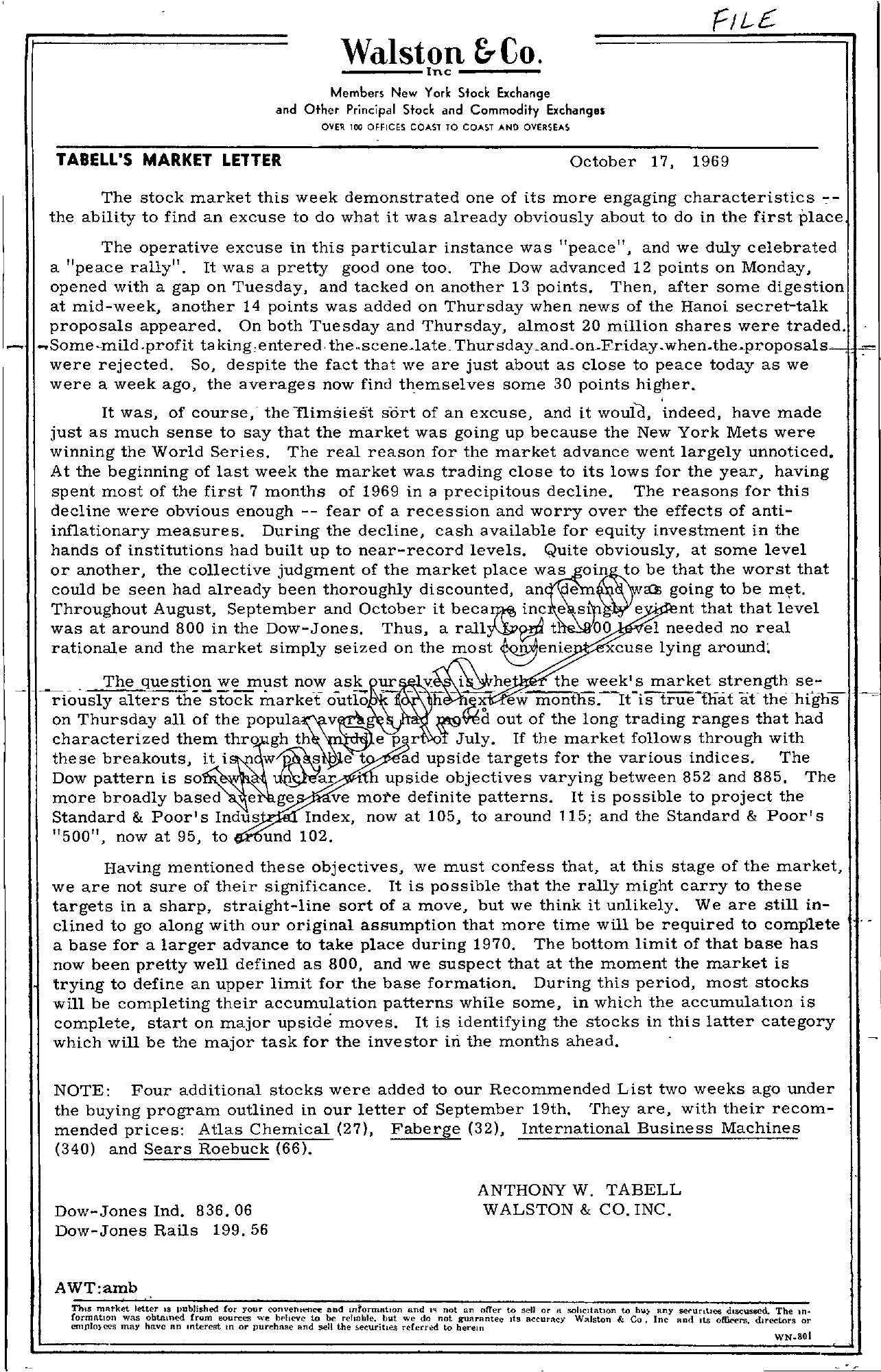 Walston &Co. Inc Members New York Stock Exchange and Other Principal Stock and Commodity Exchange. OVER 100 OFFICES COAST TO COAST AND OVERSEAS lABEll'S MARKEl lETTER October 17, 1969 The stock market this week demonstrated one of its more engaging characteristics .,the ability to find an excuse to do what it was already obviously about to do in the first place The operative excuse in this particular instance was peace, and we duly celebrated a peace rally. It was a pretty good one too. The Dow advanced 12 points on Monday, opened with a gap on Tuesday, and tacked on another 13 points. Then, after some digestion at mid-week, another 14 points was added on Thursday when news of the Hanoi secret-talk proposals appeared. On both Tuesday and Thursday, almost 20 million shares were traded. – -.Some-mild.profit taking,entered.thesceneIate. were rejected. So, despite the fact that we are just about as close to peace today as we – were a week ago, the averages now find themselves some 30 points higher. It was, of course; the -flimsiest sort of an excuse, and it would, 'indeed, have made just as much sense to say that the market was going up because the New York Mets were winning the World Series. The real reason for the market advance went largely unnoticed. At the beginning of last week the market was trading close to its lows for the year, having spent most of the first 7 months of 1969 in a precipitous decline. The reasons for this decline were obvious enough — fear of a recession and worry over the effects of anti- inflationary measures. During the decline, cash available for equity investment in the hands of institutions had built up to near-record levels. QUite obviously, at some level or another, the collective judgment of the market place was be that the worst that could be seen had already been thoroughly discounted, an e all going to be Throughout August, September and October it becal)1 inc e Sl e' nt that that level was at around 800 in the Dow-Jones. Thus, a t 00 el needed no real rationale and the market simply seized on the most enie xcuse lying around; The question we must now –rio;sly alters the-stock market outiO -. – – ew the week's market strength months.-It-(struetnat 8t the sehighs on Thursday all of the out of the long trading ranges that had characterized them thro gh th . e p r )1 July. If the market follows through with these breakouts, it i e t ad upside targets for the various indices. The Dow pattern is so upside objectives varying between 852 and 885. The more broadly based e ge ve more definite patterns. It is possible to project the Standard & Poor's Indus Index, now at 105, to around 115; and the Standard & Poor's 500, now at 95, to und 102. Having mentioned these objectives, we must confess that, at this stage of the market, we are not sure of their significance. It is possible that the rally might carry to these targets in a sharp, straight-line sort of a move, but we think it unlikely. We are still inclined to go along with our original assumption that more time will be required to complete a base for a larger advance to take place during 1970. The bottom limit of that base has now been pretty well defined as 800, and we suspect that at the moment the market is trying to define an upper limit for the base formation. During this period, most stocks will be completing their accumulation patterns while some, in which the accumulatton is complete, start on major upside moves. It is identifying the stocks in this latter category which will be the major task for the investor in the months ahead. NOTE Four additional stocks were added to our Recommended List two weeks ago under the buying program outlined in our letter of September 19th. They are, with their recommended prices Atlas Chemical (27), Faberge (32), International Business Machines (340) and Sears Roebuck (66). Dow-Jones Ind. 836.06 Dow-Jones Rails 199.56 ANTHONY W. TABELL WALSTON & CO. INC. AWTamb This matket letter IS Imblished for your conVerllefllt!' and mforrmitlon lind 1'1 not an offer to sell or tt sohCltation W bl,l) flny se1UnllC6 dll;cw;sed. The m- formatIOn wns obtnmed frgm oourees we hf'lLcve to be rehable. bl.lt we do not guarantee lts accurl\CY Walston & Co Inc and Its oflk.ers directors or emploees may have an IntercBt In or pur!!hase and sell the .!.ecuritles to herem WN.801