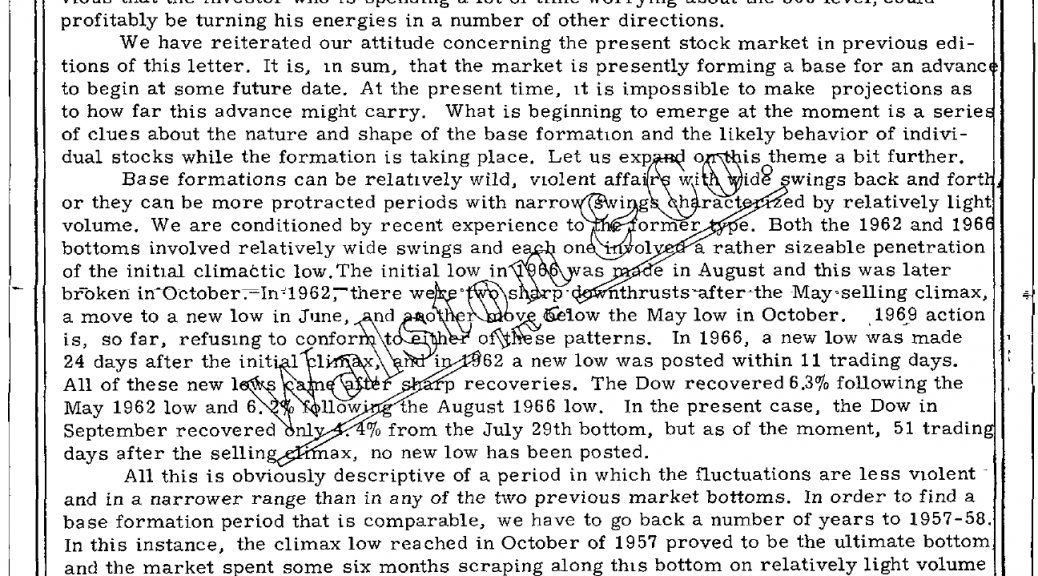 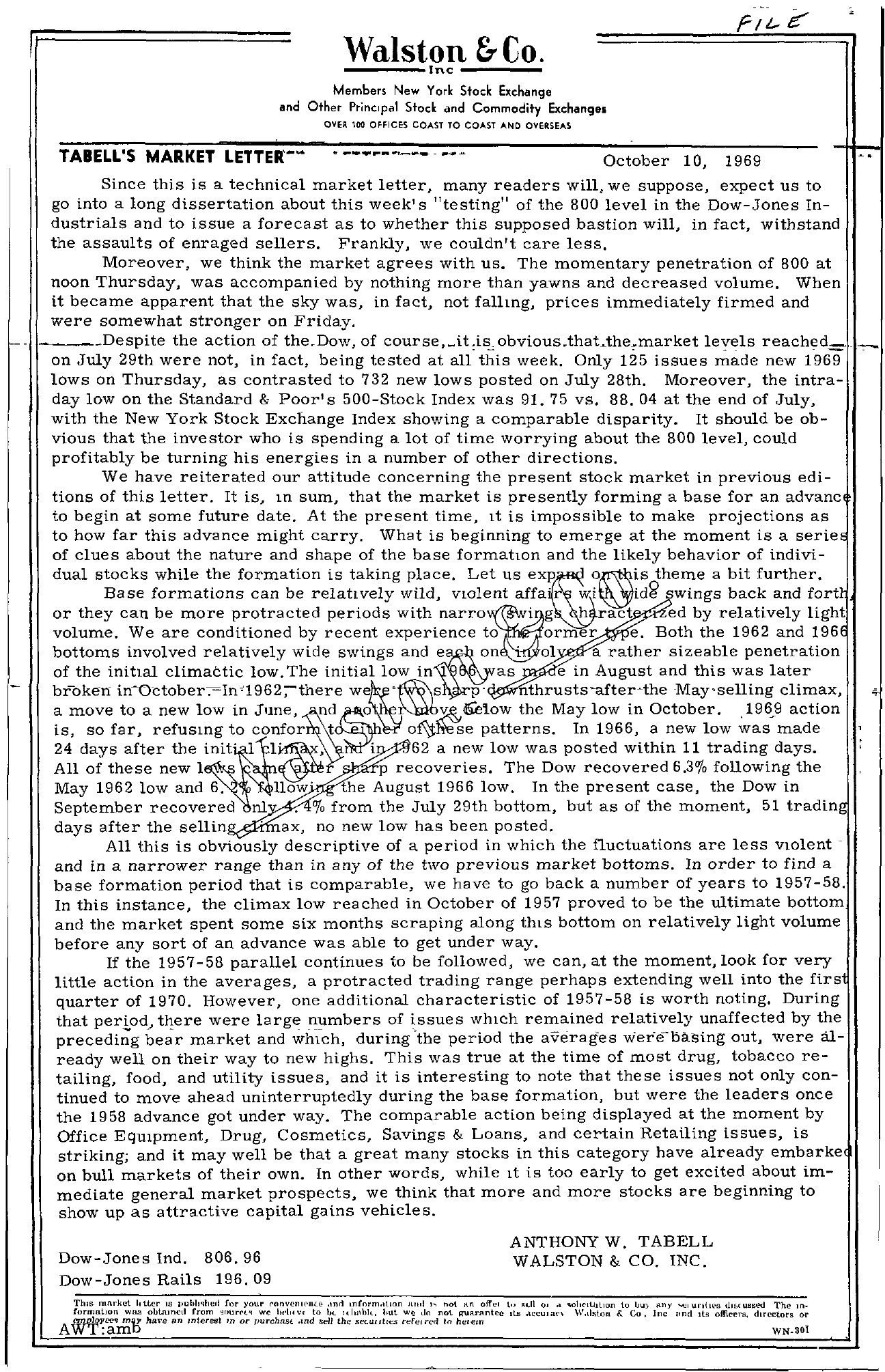 Walston &- Co. —–Inc —– Members New York Stock Exchange and Other Principal Stock and Commodity Exchange. OVER 100 OFFICES COAST TO COAST AND OVERSEAS -….TABELL'S MARKET LETTER'- .. – … October 10, 1969 Since this is a technical market letter, many readers will, we suppose, expect us to go into a long dissertation about this week's testing of the 800 level in the Dow-Jones In- dustrials and to issue a forecast as to whether this supposed bastion will, in fact, withstand the assaults of enraged sellers. Frankly, we couldn't care less. Moreover, we think the market agrees with us. The momentary penetration of 800 at noon Thursday, was accompanied by nothing more than yawns and decreased volume. When it became apparent that the sky was, in fact, not fallmg, prices immediately firmed and were somewhat stronger on Friday. 1Despite the action of the,Dow, of course,it .is, obvious.thaLthe.market levels reached, on July 29th were not, in fact, being tested at all'this week. Only 125 issues made new 1969 lows on Thursday, as contrasted to 732 new lows posted on July 28th. Moreover, the intra- day low on the Standard & Poor's 500-Stock Index was 91. 75 vs. 88. 04 at the end of July, with the New York Stock Exchange Index showing a comparable disparity. It should be ob- vious that the investor who is spending a lot of time worrying about the 800 level, could profitably be turning his energies in a number of other directions. We have reiterated our attitude concerning the present stock market in previous edi- tions of this letter. It is, 1n sum, that the market is presently forming a base for an advanc to begin at some future date. At the present time, 1t is impossible to make projections as to how far this advance might carry. What is beginning to emerge at the moment is a serie of clues about the nature and shape of the base formatlOn and the likely behavior of indivi- dual stocks while the formation is taking place. Let us theme a bit further. Base formations can be relattvely wild, vlOlent affa' swings back and fort or they can be more protracted periods with g h ract ed by relatively light volume. We are conditioned by recent experience to ormer e. Both the 1962 and 196 bottoms involved relatively wide swings and . 01 a rather sizeable penetration of the inittal climactic low. The initial low in as e in August and this was later br-oken in-October.-In'1962;-there p' nthrusts'after'the May-selling climax, a move to a new low in the May low in October. action is, so far, refusmg to confor t o\j;li'ese patterns. In 1966, a new low was made 24 days after the 1 i 62 a new low was posted within 11 trading days. ' All of these new 1 P recoveries. The Dow recovered 6.3 following the May 1962 low and 6. How' the August 1966 low. In the present case, the Dow in September recovered nl . from the July 29th bottom, but as of the moment, 51 tradin days after the sellin ax, no new low has been posted. All this is obviously descriptive of a period in which the fluctuations are less v101ent ' and in a narrower range than in any of the two previous market bottoms. In order to find a base formation period that is comparable, we have to go back a number of years to 1957-58. In this instance, the climax low reached in October of 1957 proved to be the ultimate bottom and the market spent some six months scraping along th1S bottom on relatively light volume before any sort of an advance was able to get under way. If the 1957-58 parallel continues to be followed, we can, at the moment, look for very little action in the averages, a protracted trading range perhaps extending well into the firs quarter of 1970. However, one additional characteristic of 1957-58 is worth noting. During that period, there were large numbers of issues Wh1Ch remained relatively unaffected by the bear market and wh.i'ch, during'the period the averages were'basing out, were al- ready well on their way to new highs. This was true at the time of most drug, tobacco re- tailing, food, and utility issues, and it is interesting to note that these issues not only con- tinued to move ahead uninterruptedly during the base formation, but were the leaders once the 1958 advance got under way. The comparable action being displayed at the moment by Office Egmpment, Drug, Cosmetics, Savings & Loans, and certain Retailing issues, is striking; and it may well be that a great many stocks in this category have already embarke on bull markets of their own. In other words, while 1t is too early to get excited about im- mediate general market prospects, we think that more and more stocks are beginning to show up as attractive capital gains vehicles. Dow-Jones Ind. 806.96 Dow-Jones Rails 196.09 ANTHONY W. TABELL WALSTON & CO. INC. ThiS mnrket I, tter IS for your ,mri mform.llIon Ilnol not 1\11 offc' to 1(.11 OJ .1 formatIOn WII!!I oblmncd from we Iwlu\', to bL Hllllhlt. hut WI.! do not Inlarantee Its .ICCUla'\ A mil, have an mtereet m or Jurcha.st .md sell the St'!.Ulltt!5 ref'.!t nl 10 hCl m W T amD to bu) illlY '(j, unties JI,,(USSed The ill\\'.Ilston 8. Co, Inc lind Its officers. dLrectors or WN301