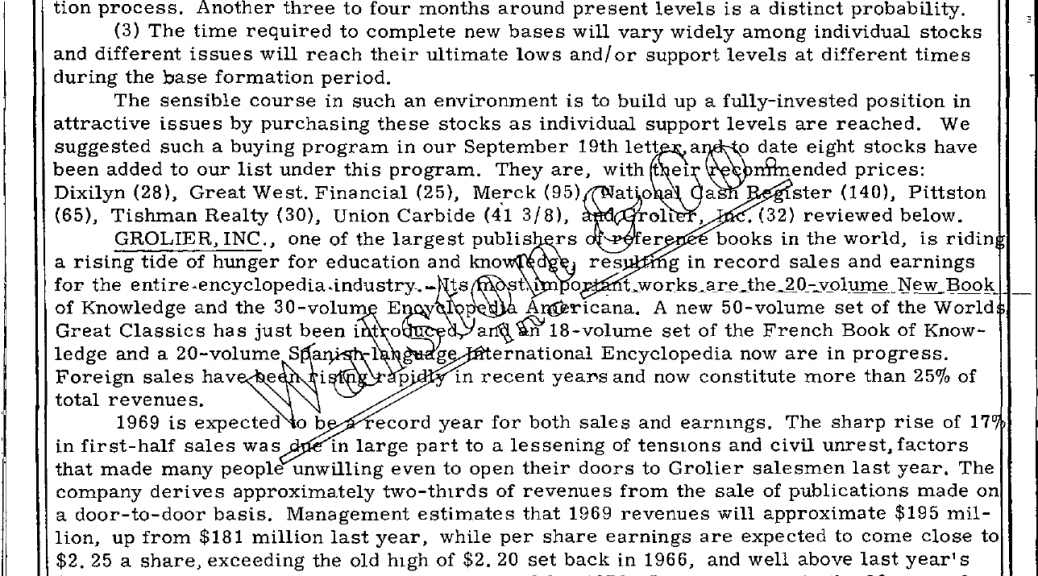 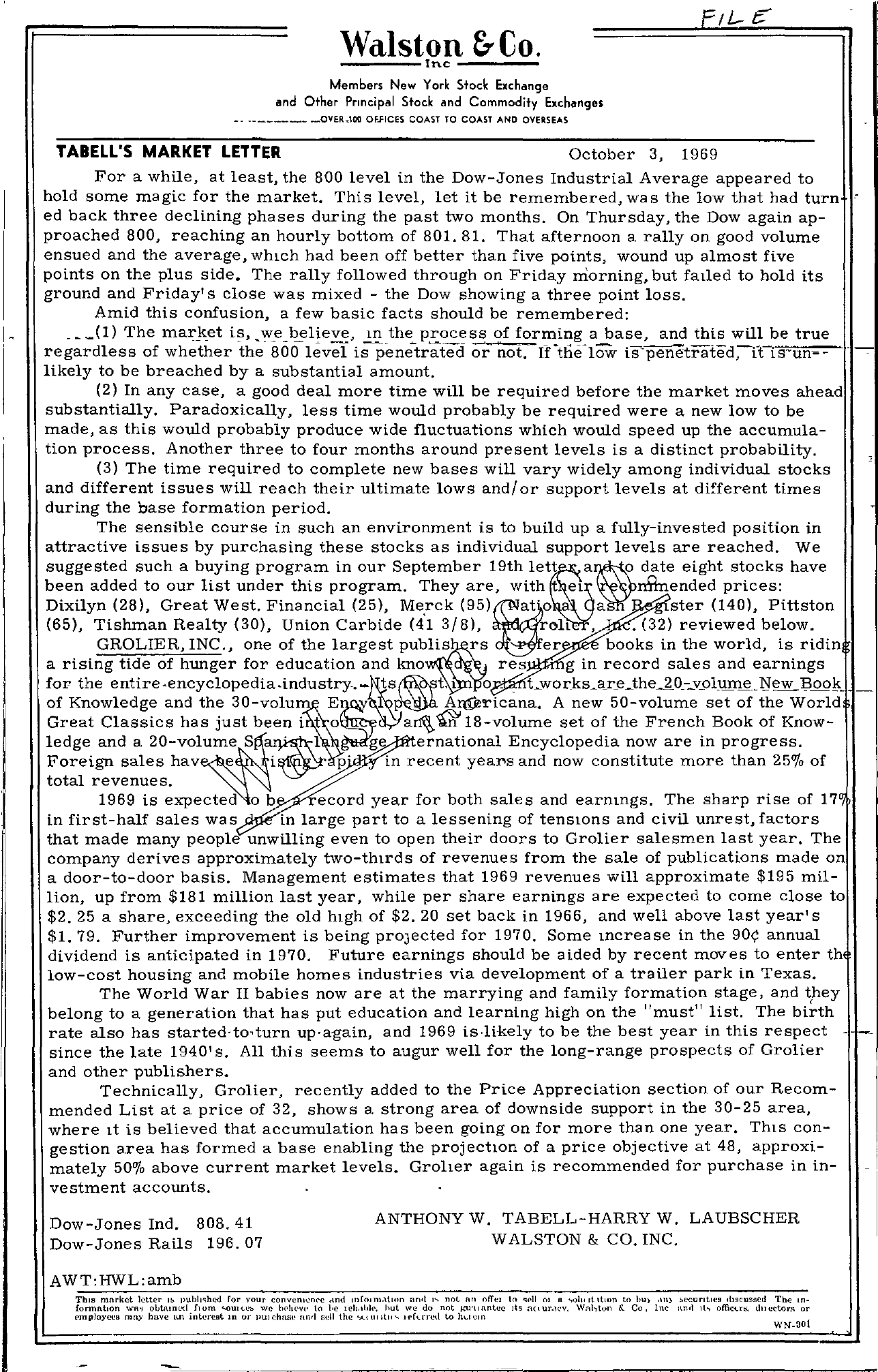 Walston &- Co. —-Inc Members New York Stock Exchange and Other Principal Stock and Commodity Exchange. OF..FICES COAST TO COAST AND OVERSEAS /1.- C TABEll'S MARKET LETTER October 3, 1969 For a while, at least, the 800 level in the Dow-Jones Industrial Average appeared to hold some magic for the market. This level, let it be remembered, wa s the low that had turn ed back three declining phases during the past two months. On Thursday, the Dow again ap- proached 800, reaching an hourly bottom of 801. 81. That afternoon a rally on good volume ensued and the average, whlch had been off better than five points, wound up almost five points on the plus side. The rally followed through on Friday morning, but falled to hold its ground and Friday's close was mixed – the Dow showing a three point loss. Amid this confusion, a few basic facts should be remembered (1) The market is, ,we believe, m the process of forming a base, and this will be true regardless of whether -the 800 levcl ispenetrated or not. ispenetraied;-rns'un– likely to be breached by a substantial amount. (2) In any case, a good deal more time will be required before the market moves ahead substantially. Paradoxically, less time would probably be required were a new low to be made, as this would probably produce wide fluctuations which would speed up the accumula- tion process. Another three to four months around present levels is a distinct probability. (3) The time required to complete new bases will vary widely among individual stocks and different issues will reach their ultimate lows and! or support levels at di!ferent times during the base formation period. The sensible course in such an environment is to build up a fully-invested position in attractive issues by purchasing these stocks as individual support levels are reached. We suggested such a buying program in our September 19th date eight stocks have been added to our list under this program. They are, with t el r&ended prices Dixilyn (28), Great West. Financial (25), Merck (95)Bt.o a a s t e r (140), Pittston (65), Tishman Realty (30), Union Carbide (41 3!8), 011,. (32) reviewed below. GROLIER, INC., one of the largest PUb5irSs er books in the world, is ridin a rising tide of hunger for education and kno res g in record sales and earnings for the 0 Lworksarethe….2.0-3.01umeJilew Booj of Knowledge and the A new 50-volume set of the World Great Classics has just been i t 0 18-volume set of the French Book of Know- ledge and a S ge ernational Encyclopedia now are in progress. Foreign sales hav e p' in recent yeaI'ls and now constitute more than 25 of total revenues. 1969 is expected 0 b ecord year for both sales and earmngs. The sharp rise of 17 in first-half sales was in large part to a lessening of tenslOns and civil unrest, factors that made many people unwilling even to open their doors to Grolier salesmen last year. The company derives approximately two-thlrds of revenues from the sale of publications made on a door-to-door basis. Management estimates that 1969 revenues will approximate 195 mil- lion, up from 181 million last year, while per share earnings are expected to come close to 2.25 a share, exceeding the old hlgh of 2. 20 set back in 1966, and well above last year's 1. 79. Further improvement is being prOJected for 1970. Some mcrease in the 90 annual dividend is anticipated in 1970. Future earnings should be aided by recent moves to enter th low-cost housing and mobile homes industries via development of a trailer park in Texas. The World War II babies now are at the marrying and family formation stage, and t,hey belong to a generation that has put education and learning high on the must list. The birth rate also has started-to-turn upa-gain, and 1969 is.li-kely to be the best year in this respect since the late 1940's. All this seems to augur well for the long-range prospects of GroUer and other publishers. Technically, Grolier, recently added to the Price Appreciation section of our Recom- mended List at a price of 32, shows a strong area of downside support in the 30-25 area, where It is believed that accumulation has been going on for more than one year. ThIS congestion area has formed a base enabling the projectlOn of a price objective at 48, approximately 50 above current market levels. Groller again is recommended for purchase in in- vestment accounts. Dow-Jones Ind. 808.41 Dow-Jones Rails 196.07 ANTHONY W. TABELL-HARRY W. LAUBSCHER WALSTON & CO. INC. AWTHWLamb ThIS market lettcr I! puhlJ'Ihcd for Your convemen('c tnd IllfoJIll,\tmll all' 1'.. not nn to'lf'1I 01 lL .,,,iUltltUn to ;,ecuntlt's ,hscussed The in- formation WlI'I oLUunl't fl0m 'OUlU'l we hphl'vl' to be teh,IIlIi, hut we do not J.,.U'lll\ntec .(lOur.I.'V, \Vnhtoll &. Co, Inc IIn,1 Ih officuH, dllcctor.; or employee!! may have un interest In or I'UI chase !Inri sell the \lllll. I ('f.. rre,1 to h.. 1ell) WN301