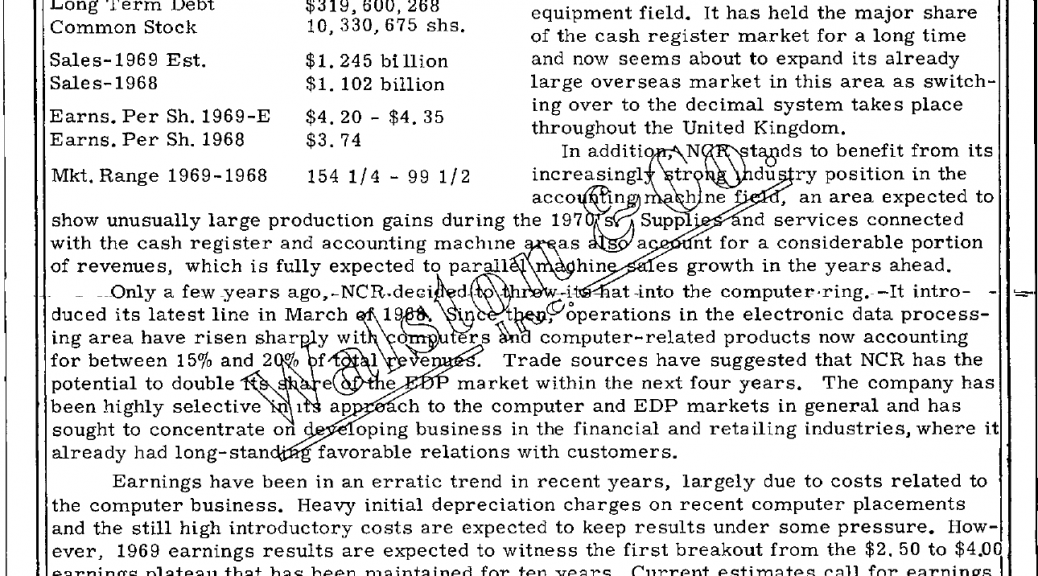 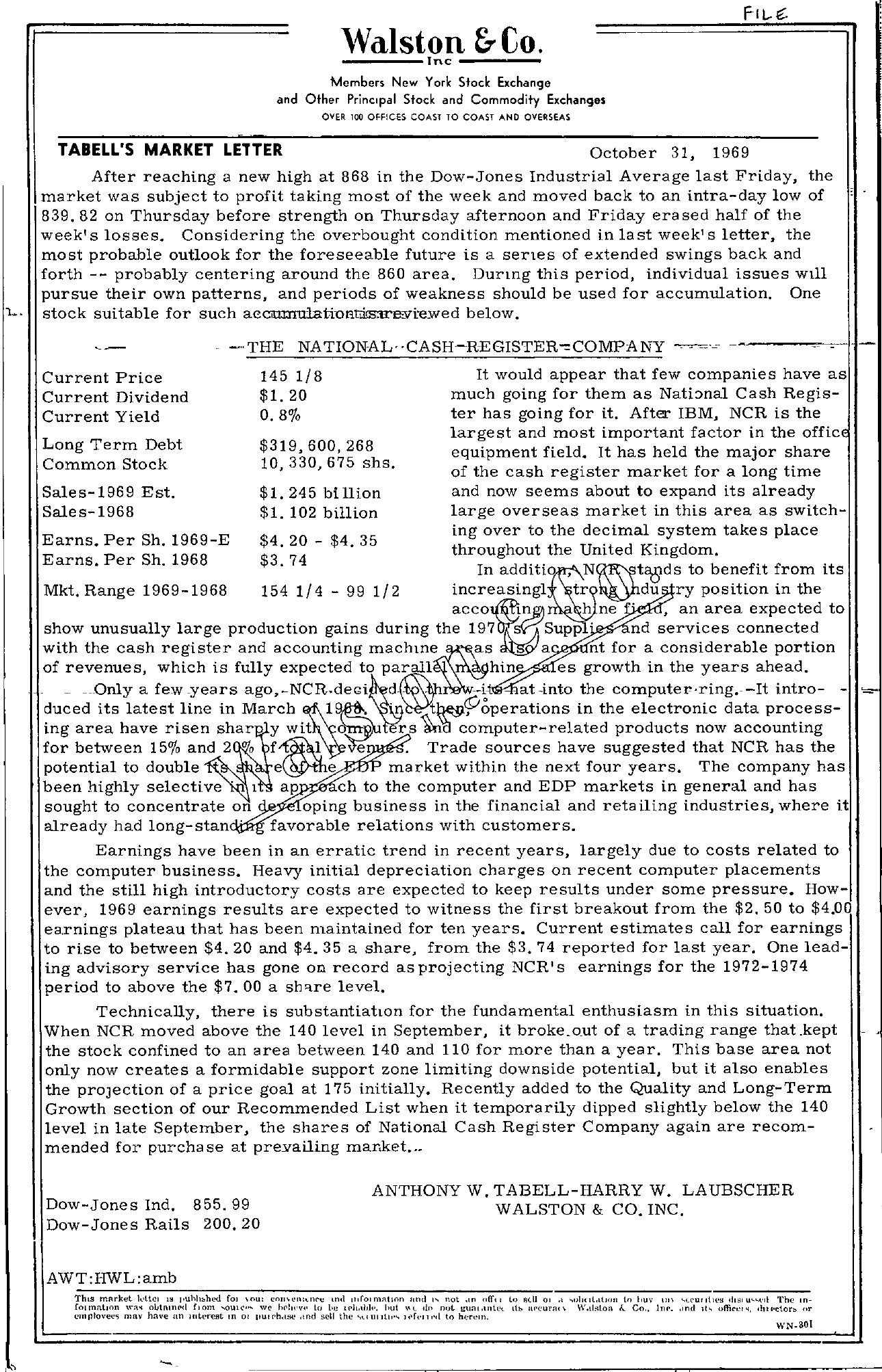 Walston &- Co. Inc Members New York Stock Exchange and Other Prine, pal Stock and Commodity Exchange. OVER 100 OFFICES COAST TO COAST AND OVERSEAS TABEll'S MARKET lETTER October 31, 1969 After reaching a new high at 868 in the Dow-Jones Industrial Average last Friday, the market was subject to profit taking most of the week and moved back to an intra-day low of 839.82 on Thursday before strength on Thursday afternoon and Friday era sed half of the week's losses. Considering the overbought condition mentioned in last week's letter, the most probable outlook for the foreseeable future is a senes of extended swings back and forth — probably centering around the 860 area. Durmg this period, individual issues wlll pursue their own patterns, and periods of weakness should be used for accumulation. One 1.. stock suitable for such acC1t1JJlUlahuntillstreYi-ewed below. -THE NATIONALCASH-R-EGISTER…COMPANY Current Price Current Dividend Current Yield Long Term Debt Common Stock 145 1/8 1. 20 O. 8 319,600,268 10,330,675 shs. It would appear that few companies have as much going for them as Natbnal Cash Register has going for it. After IBM, NCR is the largest and most important factor in the offic equipment field. It has held the major share of the cash register market for a long time Sales-1969 Est. 1. 245 billion and now seems about to expand its already Sales-1968 1. 102 billion large overseas market in this area as switch- Earns. Per Sh. 1969-E Earns. Per Sh. 1968 4.20 4.35 3 74 . ing over to the decimal system takes place throughout the United Kingdom. In to benefit from its Mkt. Range 1969-1968 154 1/4 – 99 1/2 increasingl tr ry position in the h ne , an area expected to show unusually large production gains during the 197'o(sifASupp . nd services connected with the cash register and accounting at9I a nt for a considerable portion of revenues, which is fully expected to parall hin es growth in the years ahead. . –Only a few -years -i . at -into the computer-'ring.–It intro- – ' duced its latest line in March ing area have risen shar y wit lka. in the electronic data processrs computer-related products now accounting for between 15 and 2 0 e . Trade sources have suggested that NCR has the potential to double market within the next four years. The company has been highly selective 1 ap ch to the computer and EDP markets in general and has sought to concentrate on oping business in the financial and retailing industries, where it already had long-stan' favorable relations with customers. Earnings have been in an erratic trend in recent years, largely due to costs related to the computer business. Heavy initial depreciation charges on recent computer placements and the still high introductory costs are expected to keep results under some pressure. However, 1969 earnings results are expected to witness the first breakout from the 2. 50 to 4.00 earnings plateau that has been maintained for ten years. Current estimates call for earnings to rise to between 4.20 and 4.35 a share, from the 3.74 reported for last year. One leading advisory service has gone on record as projecting NCR's earnings for the 1972-1974 period to above the 7.00 a sh'tre level. Technically, there is substantiahon for the fundamental enthusiasm in this situation. When NCR moved above the 140 level in September, it broke.o.ut of a trading range that.kept the stock confined to an area between 140 and 110 for more than a year. This base area not only now creates a formidable support zone limiting downside potential, but it also enables the proJection of a price goal at 175 initially. Recently added to the Quality and Long-Term Growth section of our Recommended List when it temporarily dipped slightly below the 140 level in late September, the shares of National Cash Register Company again are recommended for purchase at preyaiUng mar-ket… Dow-Jones Ind. 855.99 Dow-Jones Rails 200.20 ANTHONY W. TABELL-HARRY W. LAUBSCHER WALSTON & CO. INC. AWTHWLamb ffThis market I,ttel 19 I'uhlu,hld 01 'Olll ('OIl\l'IlIUlI'C mil n'OImnt1fHl lind ,.. not ,In to 1'1(11 01 l ..IJ(ll.ltWIl in Iou\' lin L('uI,llllI The tn- fOlmatJon Wf\'I ol.otl\lllPd Clom we hrI'v. to he It'h,II,.., hut '\L ,I not b'1Il1,wtl't. Lh,lIl'(,'u1';H\ \\',lI;;tol1 l.. Co 1111'. ,md it .. officer'!, ,IUI-dort or emplove!', mllv have IIIl IIItt'rCBt III 01 IIUIf'h.I;'It' .Ind sell the .. 1 to herelJl, WN.301