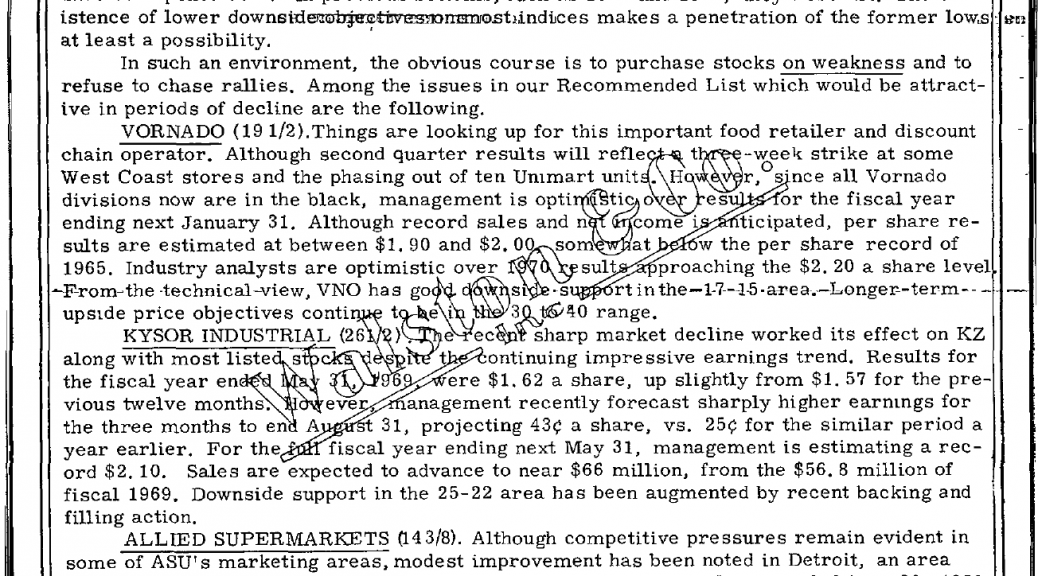 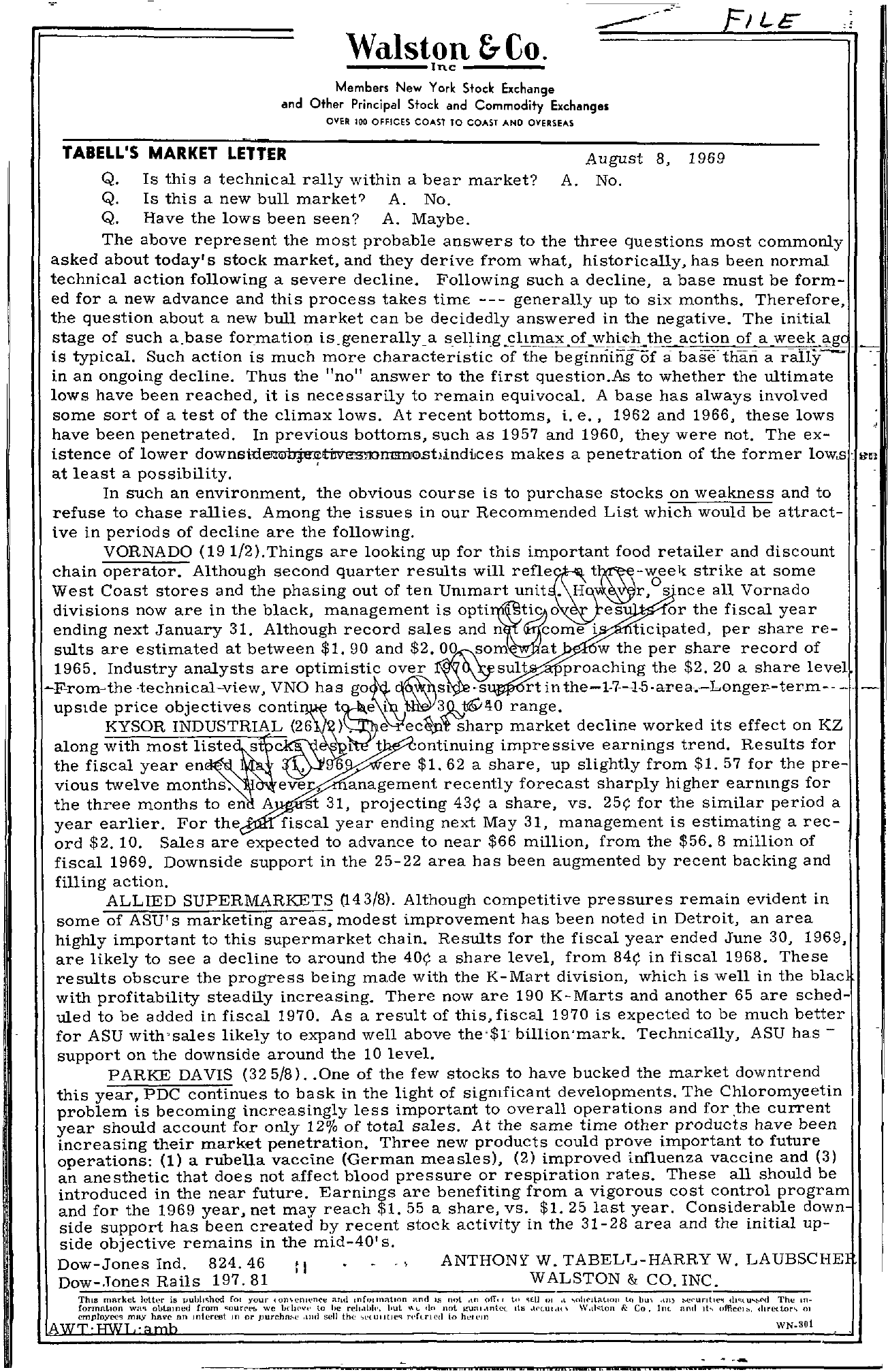 W—-a–l–s-tIoncn—&—C–o. Members New York Stock Exchange and Other Principal Stock and Commodity Exchange. OVErt 100 OFFICES COAST TO COAST AND OVERSEAS — ! TABEll'S MARKET lETTER Q. Is this a technical rally within a bear market Q. Is this a new bull market A. No. Q. Have the lows been seen A. Maybe. August 8, 1969 A. No. The above represent the most probable answers to the three questions most commonly asked about today's stock market, and they derive from what, historically, has been normal technical action following a severe decline. Following such a decline, a base must be form- ed for a new advance and this process takes time — generally up to six months. Therefore, the question about a new bull market can be decidedly answered in the negative. The initial stage of such abase formation isgenerallya sellingcltmax of whii'hthe action of a week ag is typical. Such action is much more characteristic of the beginning of a baElEithan a in an ongoing decline. Thus the no answer to the first question.As to whether the ultimate lows have been reached, it is necessarily to remain equivocal. A base has always involved some sort of a test of the climax lows. At recent bottoms, i. e., 1962 and 1966, these lows have been penetrated. In previous bottoms, such as 1957 and 1960, they were not. The ex- istence of lower downsk!et0bJeltt-ilveEmIremIlDshindtces makes a penetration of the former low,s at least a possibility. ' In such an environment, the obvious course is to purchase stocks on weakness and to refuse to chase rallies. Among the issues in our Recommended List which would be attract- ive in periods of decline are the following. VORNADO (19 1/2).Things are looking up for this important food retailer and discount chain operator. Although second quarter results will West Coast stores and the phasing out of ten Ummart unit. H strike at some all Vornado divisions now are in the black, management is OPti!jiC 0 es or the fiscal year ending next January 31. Although record sales and n come i ticipated, per share re- sults are estimated at between 1. 90 and 1965. Industry analysts are optimistic over som at w the per share record of sult proaching the 2.20 a share level –F-rom-the -technical-view, VNO has upSIde price objectives KYSOR INDUSTRIAL (26 ) . rt in the-l7—1-5a-rea.–Longer–term— i l \li&3Jl–J6i II 0 range. e ec&;p'r sharp market decline worked its effect on KZ along with most liste s I t ontinuing impressive earnings trend. Results for the fiscal year en ere 1. 62 a share, up slightly from 1. 57 for the pre- vious twelve months. eve, anagement recently forecast sharply higher earmngs for the three months to en A st 31, projecting 43; a share, vs. 25; for the similar period a year earlier. For the fiscal year ending next May 31, management is estimating a rec- ord 2.10. Sales are expected to advance to near 66 million, from the 56.8 million of fiscal 1969. Downside support in the 25-22 area has been augmented by recent backing and filling action. ALLIED SUPERMARKETS (143/8). Although competitive pressures remain evident in some of ASU' s marketing areas, modest improvement has been noted in Detroit, an area highly important to this supermarket chain. Results for the fiscal year ended June 30, 1969, are likely to see a decline to around the 40; a share level, from 84; in fiscal 1968. These results obscure the progress being made with the K-Mart division, which is well in the blac with profitability steadily increaSing. There now are 190 K-Marts and another 65 are sched- uled to be added in fiscal 1970. As a result of this, fiscal 1970 is expected to be much better for ASU with'sales likely to expand well above the-1- billion' mark. Technically, ASU has – support on the downside around the 10 level. PARKE DAVIS (325/8) .. One of the few stocks to have bucked the market downtrend this year, PDC continues to bask in the light of sigmficant developments. The Chloromyeetin problem is becoming increasingly less important to overall operations and for ,the current year should account for only 12 of total sales. At the same time other products have been increasing their market penetration. Three new products could prove important to future operations (1) a rubella vaccine (German measles), (2) improved influenza vaccine and (3) an anesthetic that does not affect blood pressure or respiration rates. These all should be introduced in the near future. Earnings are benefiting from a vigorous cost control program and for the 1969 year, net may reach 1. 55 a share, vs. 1. 25 last year. Considerable down side support has been created by recent stock activity in the 31-28 area and the initial up- side objective remains in the mid-40's. Dow-Jones Ind. 824.46 f I – ANTHONY W. W. LAUBSCHE Dow-.ToneR Rails 197.81 WALSTON & CO. INC. ThiS maTket letter is JJU1JJI;hcd for your alLd InfOllnatlOn Itnd IS not ,In ofT., to ;( UI .1 ,olullat,OlI lo bu\ ,ul) ,h;(Utf'd Tho.' 111- formation WII'I obtain cd from we hdH'V to hc rell,llll.,. hut v. L do lIot 1-.'1.111 lis ,('LUI,\( W.t11.011 &. Co. 1m. find It ufficel, .hrettor… 01 employees n'lll.y have nn Jnterest In or purcha.c .\lId sell the W(UIJtJC, rt,rtrlcd to heJl'lll WN.30t