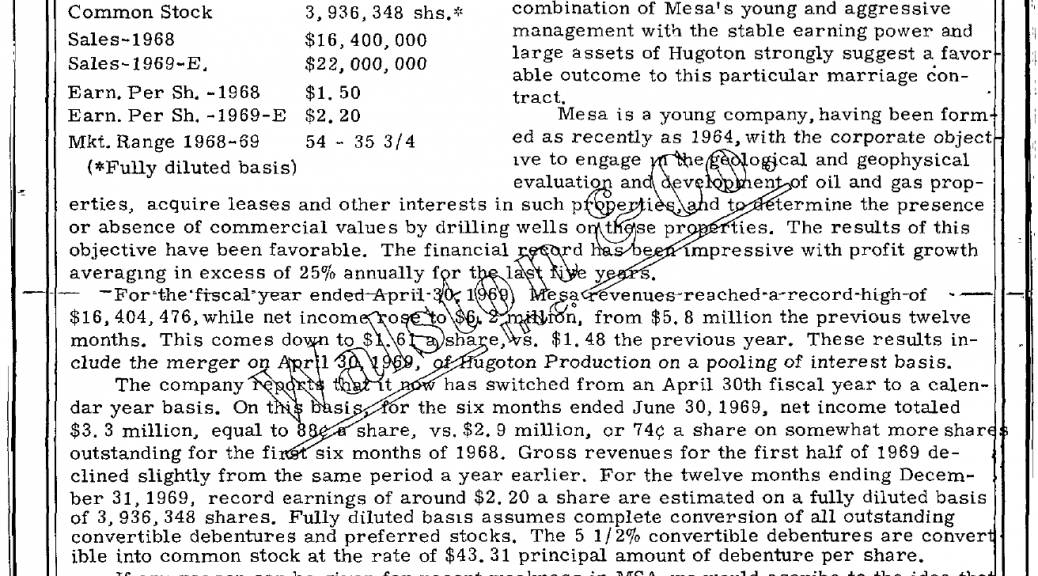 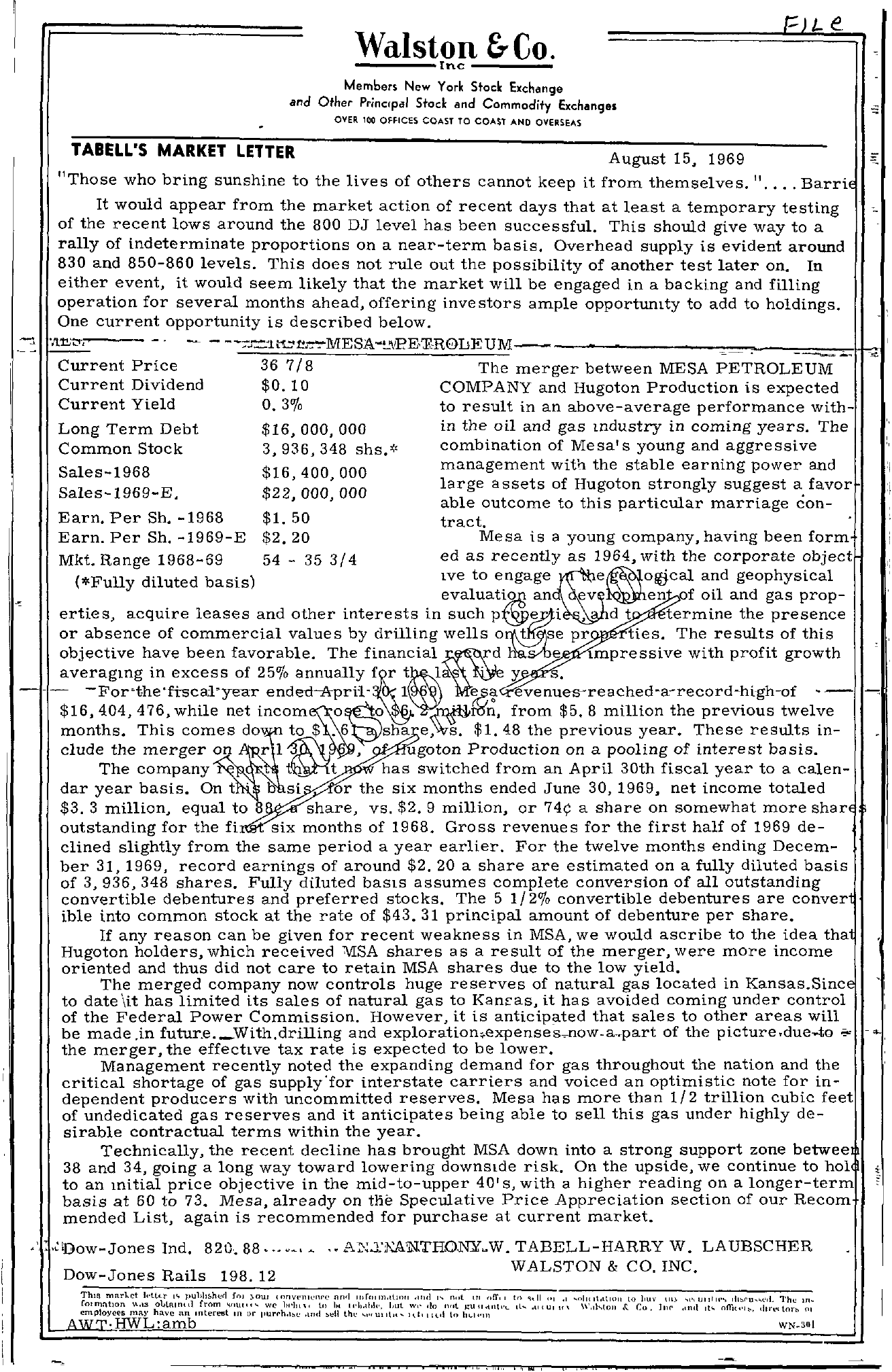 Walston &Co. —–Inc —- Members New York Stock Exchange and Other PrincIpal Stock and Commodity Exchange. OVER 100 OFFICES COAST TO COAST AND OVERSEAS TABEll'S MARKET lETTER August 15, 1969 Those who bring sunshine to the lives of others cannot keep it from themselves. …. Barri It would appear from the market action of recent days that at least a temporary testing of the recent lows around the 800 DJ level has been successful. This should give way to a rally of indeterminate proportions on a near-term basis. Overhead supply is evident around 830 and 850-860 levels. This does not rule out the possibility of another test later on. In either event, it would seem likely that the market will be engaged in a backing and filling operation for several months ahead, offering investors ample opportumty to add to holdings. One current opportunity is described below. – ',11!;c – -….1-k-,j Current Price Current Dividend Current Yield Long Term Debt Common Stock Sales-1968 Sales-1969-E. Earn. Per Sh. -1968 Earn. Per Sh. -1969-E Mkt. Range 1968-69 36 7/8 0.10 0.3 16,000,000 3,936,348 shs.';' 16 400 000 22' 000' 000 1. 50 2.20 54 – 35 3/4 The merger between MESA PETROLEUM COMPANY and Hugoton Production is expected to result in an above-average performance with- in the oil and gas mdustry in coming years. The combination of Mesa's young and aggressive management with the stable earning power and large assets of Hugoton strongly suggest a. favor able outcome to this particular marriage contract. Mesa is a young company, having been form ed as recently as 1964, with the corporate object (Fully diluted basis) lve to an ev and geophysical f oil and gas prop- erties, acquire leases and other interests in such , d t termine the presence or absence of commerCial values by drilling wells ol'1\tfro/)se pr ties. The results of this objective have been favorable. The ll9S/be lmpressive with profit growth averagmg in excess of 25 annually .y – — -For'thefiscal'ye-ar enden-i\-prii' 1 evenues-reached-a-record'high-of – – 16,404,476, while net from 5.8 million the previous twelve months. This comes do to . e;Vs. 1. 48 the previous year. These results in- clude the merger on r 1 ugoton Production on a pooling of interest basis. The company has switched from an April 30th fiscal year to a calen- dar year basis. On t si or the six months ended June 30,1969, net income totaled 3, 3 million, equal to share, vs. 2. 9 million, or 74; a share on somewhat more shar outstanding for the fi six months of 1968. Gross revenues for the first half of 1969 de- clined slightly from the same period a year earlier. For the twelve months ending Decem- ber 31,1969, record earnings of around 2.20 a share are estimated on a fully diluted basis of 3,936,348 shares. Fully diluted basls assumes complete conversion of all outstanding convertible debentures and preferred stocks. The 5 1/2 convertible debentures are conver ible into common stock at the rate of 43.31 prinCipal amount of debenture per share. If any reason can be given for recent weakness in MSA, we would ascribe to the idea tha Hugoton holders, which received vrSA shares as a result of the merger, were more income oriented and thus did not care to retain MSA shares due to the low yield. The merged company now controls huge reserves of natural gas located in Kansas.Sinc to date lit has limited its sales of natural gas to it has aVOided coming under control of the Federal Power Commission. However, it is anticipated that sales to other areas will be made .in futur.e.With,drilling and of the picture,due-to the merger, the effective tax rate is expected to be lower. Management recently noted the expanding demand for gas throughout the nation and the critical shortage of gas supply'for interstate carriers and voiced an optimistic note for in- dependent producers with uncommitted reserves. Mesa has more than 1/2 trillion cubic feet of undedicated gas reserves and it anticipates being able to sell this gas under highly de- sirable contractual terms within the year. Technically, the recent decline has brought MSA down into a strong support zone betwee 38 and 34, going a long way toward lowering downslde risk. On the upside, we continue to hoI to an mitial price objective in the mid-to-upper 40' s, with a higher reading on a longer-term basis at 60 to 73. Mesa, already on tile Speculative Price Appreciation section of our Recom mended List, again is recommended for purchase at current market. ', .. Ind. 820.88 … ,. Dow-Jones Rails 198.12 TABELL-HARRY W. LAUBSCHER WALSTON & CO. INC. ThIEl marl..et 1,ttL! 1' puhh&hcd fnJ lonYl'l11L'rlre and lur'm.lb .llId I nt ,II /f,, to (11.1 …,,11 11M,,, to \'Il\' fmmntlon …..18 ollRlnttl from '1tll 1'lu,, to hl 1,II.\I,lt. I,ut w,' ,In lIlt J,UIl,\lIlt. ,I.. ,'U, l\ \\'Itoll Co. Jilt' employees may have an Interetlt In )r I,urrh,\l' ,Iml bell thl' 'UIII … 111'111,.,110 hIlll HWLamb 'It… , U I I ! I I ' , The 1/1 I It… oflhI, dlrttort 01 WN'ot I ,L ,d ,IU,