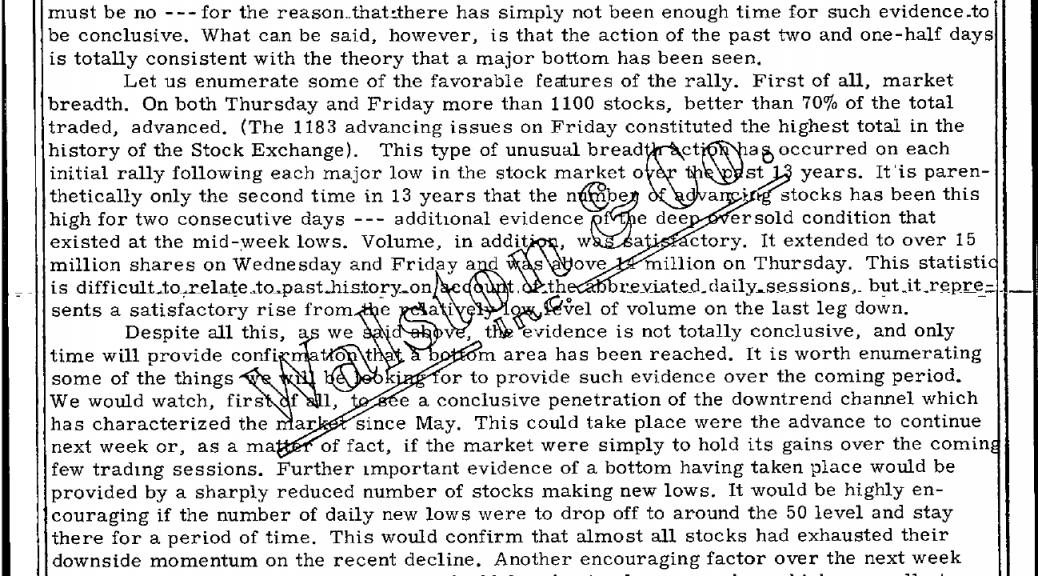 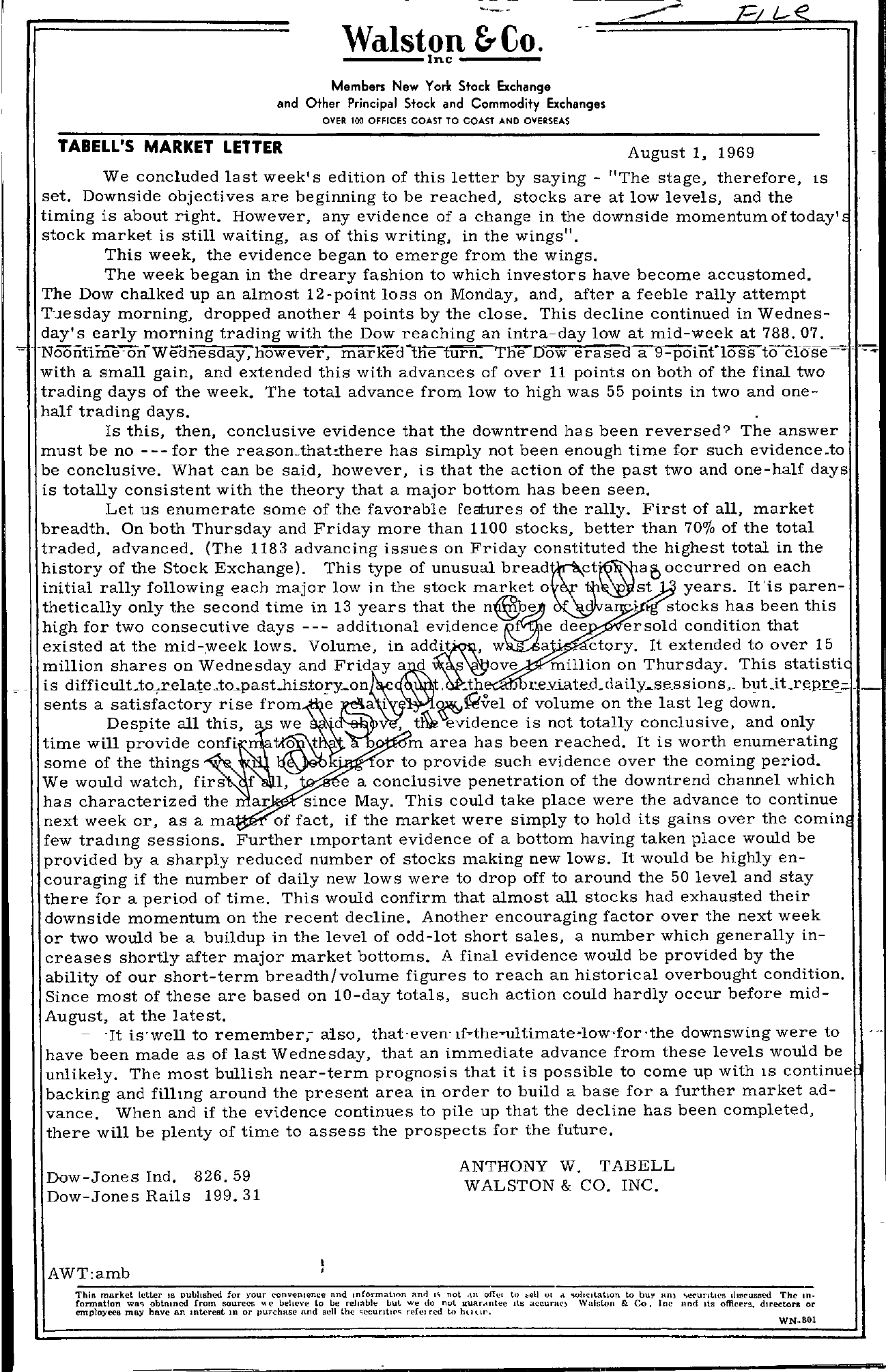 Walston &Co. – – – – – Inc – – – – – Members New York Stock Exchange and Other Principal Stock and Commodity Exchanges OVER 100 OFFICES COAST TO COAST AND OVERSEAS TABELL'S MARKET LETTER August 1, 1969 We concluded last week's edition of this letter by saying – The stage, therefore, 1S set. Downside objectives are beginning to be reached, stocks are at low levels, and the timing is about right. However, any evidence of a change in the downside momentum of today' stock market is still waiting, as of this writing, in the wings. This week, the evidence began to emerge from the wings. The week began in the dreary fashion to which investors have become accustomed. The Dow chalked up an almost 12-point loss on Monday, and, after a feeble rally attempt Tlesday morning, dropped another 4 points by the close. This decline continued in Wednes- day's early morning trading with the Dow reaching an intra-day low at mid-week at 788.07. —Noontime''OriWednesday,liowever, marKedtlie turn. 1'1ieDow erased a 9-poiiit-lossto c1ose with a small gain, and extended this with advances of over 11 points on both of the final two trading days of the week. The total advance from low to high was 55 points in two and one- half trading days. Is this, then, conclusive evidence that the downtrend has been reversed The answer must be no —for the reasonthatlhere has simply not been enough time for such evidence.to be conclusive. What can be said, however, is that the action of the past two and one-half days is totally consistent with the theory that a major bottom has been seen. Let us enumerate some of the favorable features of the rally. First of all, market breadth. On both Thursday and Friday more than 1100 stocks, better than 70 of the total traded, advanced. (The 1183 advancing issues on Friday constituted the highest total in the history of the Stock Exchange). This type of unusual occurred on each initial rally following each major low in the stock market 0 years. It is paren- thetically only the second time in 13 years that the a' fi,(stocks has been this high for two consecutive days — additlOnal evidence e dee ersold condition that existed at the mid-week lows. Volume, in ,w a' ctory. It extended to over 15 million shares on Wednesday and Friday id ove is t. tho million on Thursday. This statisti sents a satisfactory rise Despite all this, a we' i , of volume on the last leg down. is not totally conclusive, and only time will provide confi m area has been reached. It is worth enumerating some of the things – or to provide such evidence over the coming period. We would watch, firs 1, e a conclusive penetration of the downtrend channel which has characterized the ar since May. This could take place were the advance to continue next week or, as a rna of fact, if the market were simply to hold its gains over the comin few tradtng sessions. Further 1mportant evidence of a bottom having taken place would be provided by a sharply reduced number of stocks making new lows. It would be highly en- couraging if the number of daily new lows were to drop off to around the 50 level and stay there for a period of time. This would confirm that almost all stocks had exhausted their downside momentum on the recent decline. Another encouraging factor over the next week or two would be a buildup in the level of odd-lot short sales, a number which generally in- creases shortly after major market bottoms. A final evidence would be provided by the ability of our short-term breadth/volume figures to reach an historical overbought condition. Since most of these are based on 10-day totals, such action could hardly occur before mid- August, at the Jatest. – -It iswell to remember,- also, downswing were to have been made as of last Wednesday, that an immediate advance from these levels would be unlikely. The most bullish near-term prognosis that it is possible to come up with 1S continue backing and filltng around the present area in order to build a base for a further market ad- vance. When and if the evidence continues to pile up that the decline has been completed, there will be plenty of time to assess the prospects for the future. Dow-Jones Ind. 826. 59 Dow-Jones Rails 199.31 ANTHONY W. TABELL WALSTON & CO. INC. AWTamb Thi8 market l(!tter IS pubhshed for )'our convenHmce find InformatIOn And 1' not .\11 ofTet to 01 '1ohcltatJon to buy 1m …..'('untles lhscussed The In. formation WA'I obtamed from sources Vol' heh'\'(, to be rehable hut we do not gUAr.-mtec Its acc-ural') \Valslon & Co. Inc and Its officers. dIrectors or employees may have an mterest m or Ilunhllse and sell the refClrC(t to