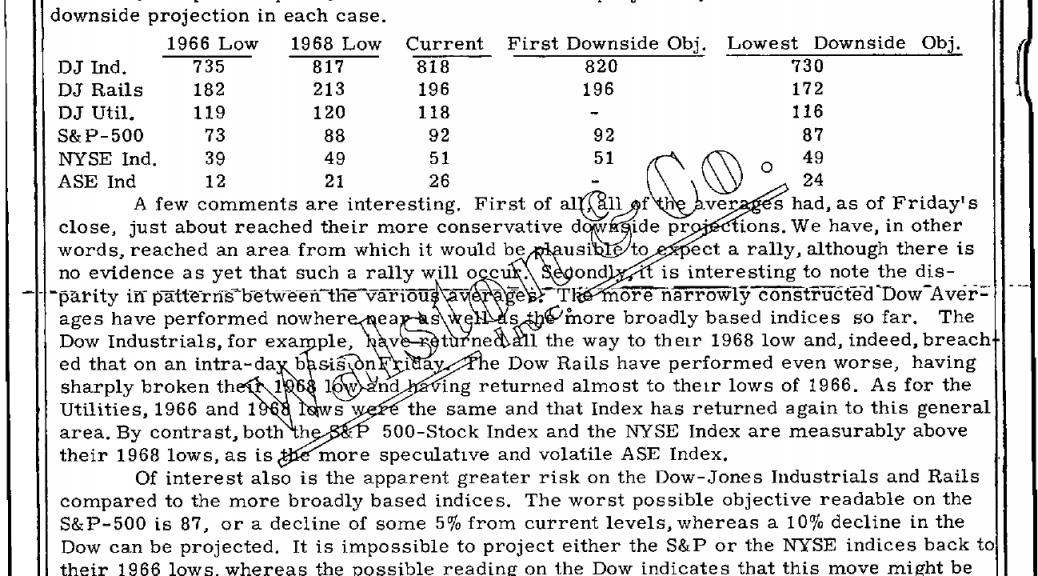 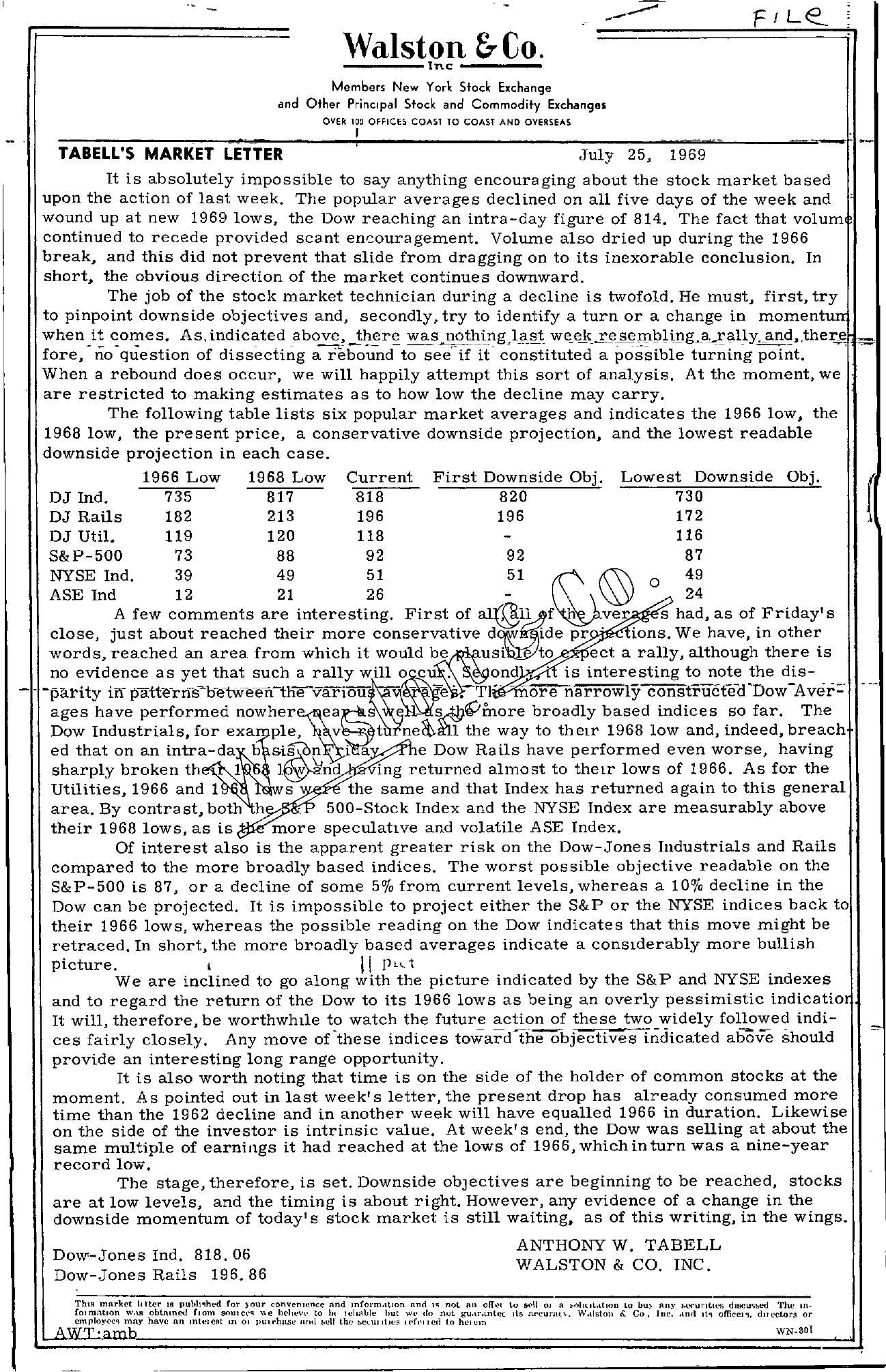 Walston &- Co. —–Inc —– Members New York Stock Exchange ,and Other PrinCipal Stock and Commodity Exchange. OVER 100 OFFICES COAST TO COAST AND OVERSEAS TABEll'S MARKET LETTER July – —g– 25, 1969 F! It is absolutely impossible to say anything encouraging about the stock market based upon the action of last week. The popular averages declined on all five days of the week and wound up at new 1969 lows, the Dow reaching an intra-day figure of 814. The fact that volum continued to recede provided scant encouragement. Volume also dried up during the 1966 break, and this did not prevent that slide from dragging on to its inexorable conclusion. In short, the obvious direction of the market continues downward. The job of the stock market technician during a decline is twofold. He must, first, try to pinpoint downside objectives and, secondly, try to identify a turn or a change in momentu when it comes. As, indicated … fore, – no -question of dissecting a rebound to see–if it constituted a possible turning pOint. -, When a rebound does occur, we will happily attempt this sort of analysis. At the moment, we are restricted to making estimates as to how low the decline may carry. The following table lists six popular market averages and indicates the 1966 low, the 1968 low, the present price, a conservative downside projection, and the lowest readable downside projection in each case. 1966 Low 1968 Low Current First Downside Obj. Lowest Downside Obj. DJ Ind. 735 817 818 820 730 DJ Rails 182 213 196 196 172 DJ Util. 119 120 118 116 S&P-500 73 88 92 92 87 NYSE Ind. ASE Ind 39 12 49 51 21 26 51 – 49 \0i 0 24 A few comments are interesting. First of alllJJf Ii ver s had, as of Friday's close, just about reached their more conservative pr' ions. We have, in other words, reached an area from which it usi'tip'to ect a rally, although there is no evidence as yet that such a rally ond . is interesting to note the dis- -, parity iff – – -e ' .-T .- – ore narrowly constructeo'Dow-Aver;- ages have performed broadly based indices so far. The Dow Industrials, for exa pIe, v t the way to thelr 1968 low and, indeed, breach ed that on an intra-da b i a e Dow Rails have performed even worse, having sharply broken th 1 lw-and ing returned almost to thelr lows of 1966. As for the Utilities, 1966 and 1 s the same and that Index has returned again to this general 500-Stock Index and the NYSE Index are measurably above their 1968 lows, as is more speculahve and volatile ASE Index. Of interest also is the apparent greater risk on the Dow-Jones Industrials and Rails compared to the more broadly based indices. The worst possible objective readable on the S&P-500 is 87, or a decline of some 5 from current levels, whereas a 10 decline in the Dow can be projected. It is impossible to project either the S&P or the NYSE indices back to their 1966 lows, whereas the possible reading on the Dow indicates that this move might be retraced. In short, the more broadly based averages indicate a conslderably more bullish picture. I Ii hc t We are inclined to go along with the picture indicated by the S&P and NYSE indexes and to regard the return of the Dow to its 1966 lows as being an overly pessimistic indicatio It will, therefore, be worthwhlle to watch the future action of these two widely followed indi- ces fairly closely. Any move of 'these indices toward the objectives indicated abOve should provide an interesting long range opportunity. It is also worth noting that time is on the side of the holder of common stocks at the moment. As pointed out in last week's letter, the present drop has already consumed more time than the 1962 decline and in another week will have equalled 1966 in duration. Likewise on the side of the investor is intrinsic value. At week's end, the Dow was selling at about the same multiple of earnings it had reached at the lows of 1966, which in turn was a nine-year record low. The stage, therefore, is set. Downside obJectives are beginning to be reached, stocks are at low levels, and the timing is about right. However, any evidence of a change in the downside momentum of today' s stock market is still waiting, as of this writing, in the wings. Dow-Jones Ind. 818.06 Dow-Jones Rails 196.86 ANTHONY W. TABELL WALSTON & CO. INC. ThiS mnrket litter IS IJuLhc;ht.'d for lour conVl.'flll.'nce nnd mform,ltlOn nnd 1; not lUi ofl''-''I to S('\l 01 n ;,()hut.l.tlOn to bu Rny M.'t'untlL'S dlscued The In- fOlmntlOn W,\S obluned flom SOUlet''! I.' h('l1l'v,' to ht lelllll)le hut Wt' do nut Its nrcurnn, \\',llstOlI li. Co, 1m', ,lIul lt'l offi('cl'I. dlll'Ctors or cmploy('t''1 may havc an mtelCAt In 01 pUI,-hase m,d !'cll tht' bt'LUlltlt'S I ('f1 led 10 ht'lcm WN.301