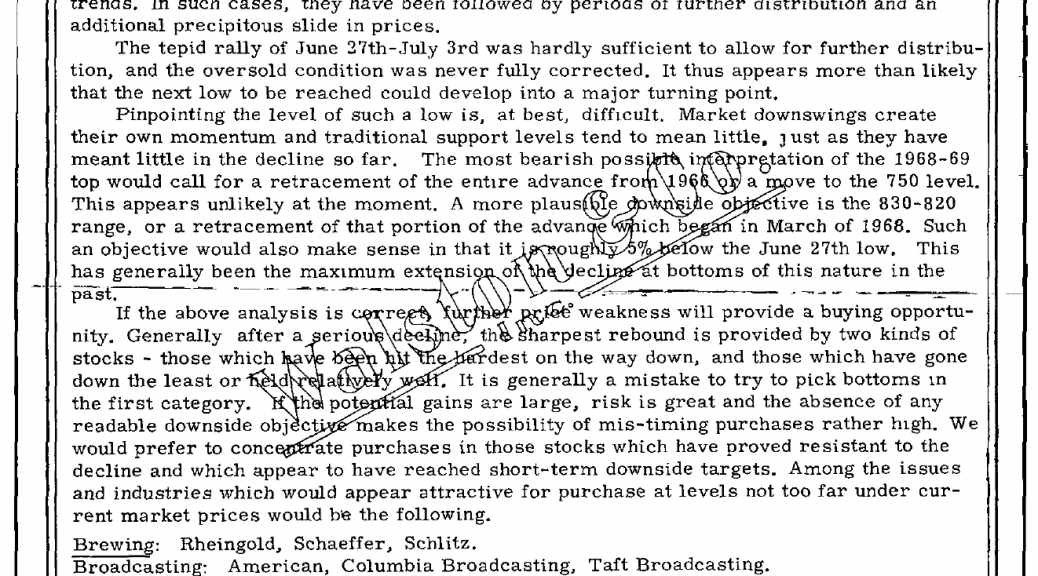 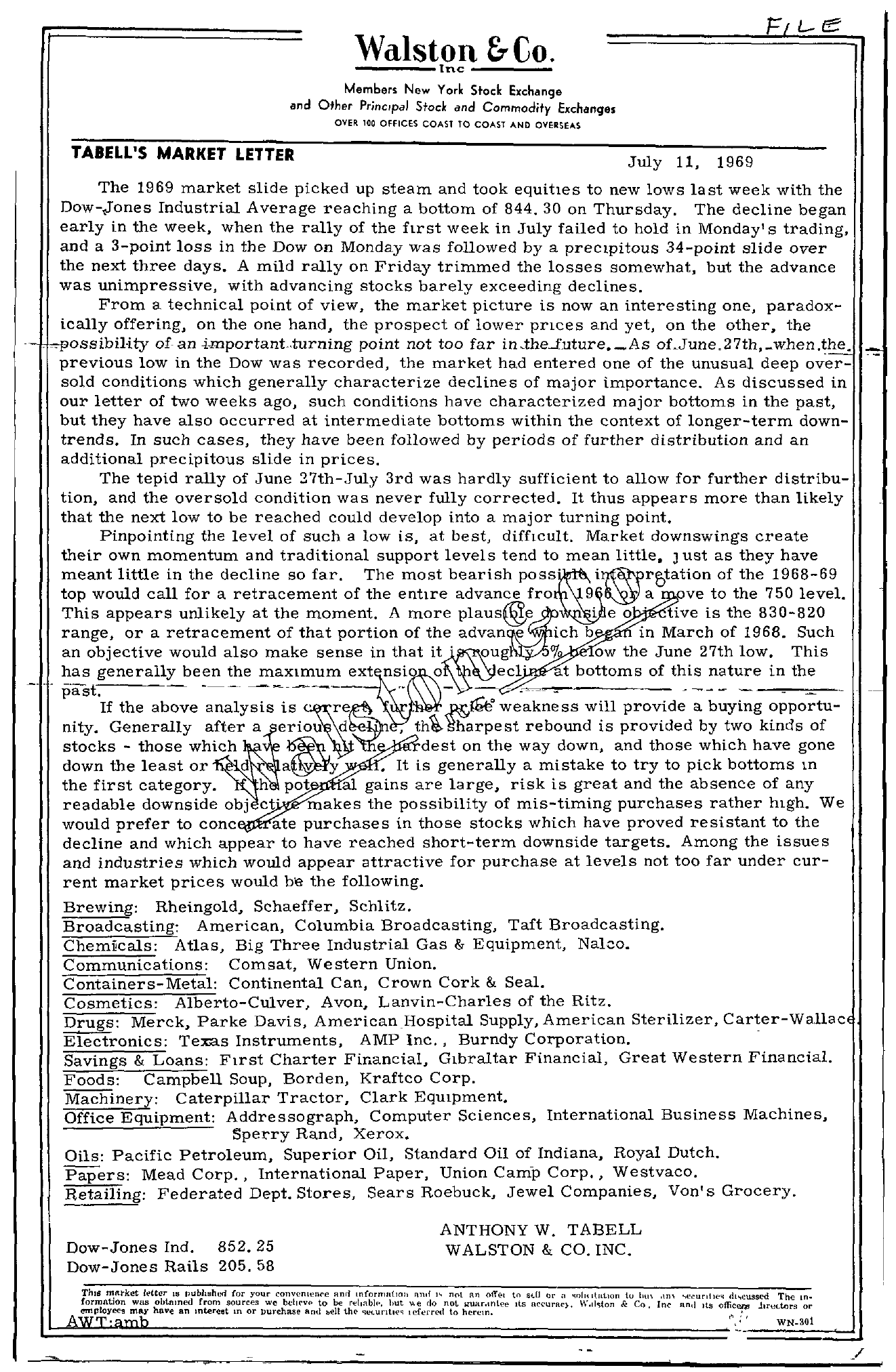 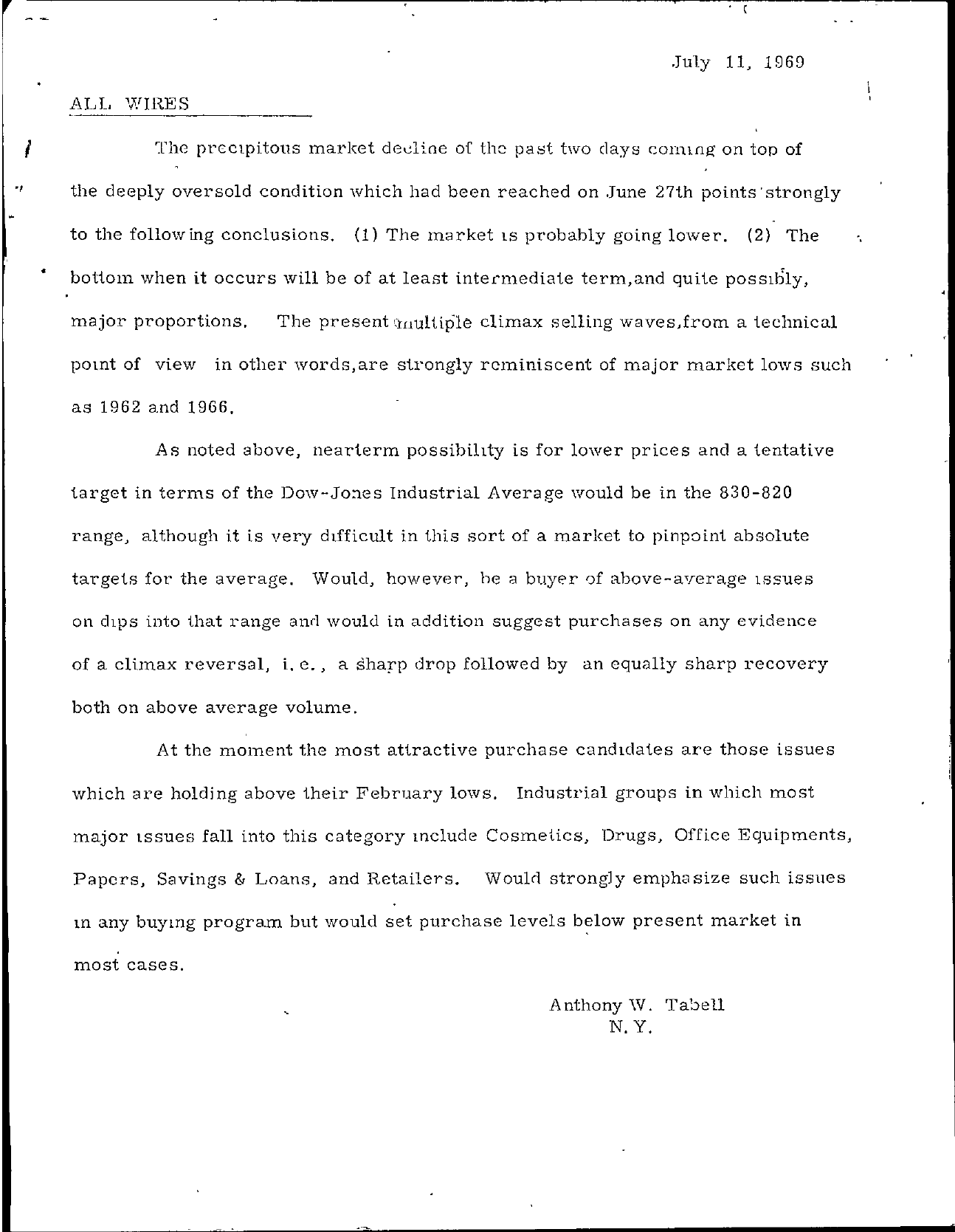 Walston &- Co. – – – – – I n c – – Members New York Stock Exchange and Other PrincIpal Stock and Commodity Exchange. OVER 100 OfFICES COAST TO COAST AND OVERSEAS TABEll'S MARKET lETTER July 11, 1969 The 1969 market slide picked up steam and took equities to new lows last week with the Dow-Jones Industrial Average reaching a bottom of 844. 30 on Thursday. The decline began early in the week, when the rally of the flrst week in July failed to hold in Monday's trading, and a 3-point loss in the Dow on Monday was followed by a preclpitouS 34-point slide over the next three days. A mild rally on Friday trimmed the losses somewhat, but the advance was unimpressive, with advanCing stocks barely exceeding declines. From a technical point of view, the market picture is now an interesting one, paradox- icallyoffering, on the one hand, the prospect of lower prlces and yet, on the other, the ,possibil-ity of an point not too far inctheJuture.As oLJune.27th,when.the. previous low in the Dow was recorded, the market had entered one of the unusual deep over- sold conditions which generally characterize declines of major importance. As discussed in our letter of two weeks ago, such conditions have characterized major bottoms in the past, but they have also occurred at intermediate bottoms within the context of longer-term down- trends. In such cases, they have been followed by periods of further distribution and an additional precipitous slide in prices. The tepid rally of June 37th-July 3rd was hardly sufficient to allow for further distribu- tion, and the oversold condition was never fully corrected. It thus appears more than likely that the next low to be reached could develop into a major turning point. Pinpointing the level of such a low is, at best, difflcult. Market downswings create their own momentum and traditional support levels tend to mean little, Just as they have meant little in the decline so far. The most bearish of the 1968-69 top would call for a retracement of the enttre advance fro 9 ve to the 750 level. This appears unlikely at the moment. A more i eo' tive is the 830-820 range, or a retracement of that portion of the advan e ich b in March of 1968. Such an objective would also make sense in that 0/. ow the June 27th low. This ben bottoms of the If the above analysis is Jl&t& weakness will provide a buying opportu- nity. Generally after a eriou d , !iharpest rebound is provided by two kinds of stocks – those which dest on the way down, and those which have gone down the least or d . It is generally a mistake to try to pick bottoms tn the first category. h pot hl gains are large, risk is great and the absence of any readable downside obj ct makes the possibility of mis-timing purchases rather hlgh. We would prefer to conc ate purchases in those stocks which have proved resistant to the decline and which appear to have reached short-term downside targets. Among the issues and industries which would appear attractive for purchase at levels not too far under cur- rent market prices would the following. Brewing Rheingold, SChaeffer, Schlitz. Broadcasting American, Columbia Broadcasting, Taft Broadcasting. Chemi!cals Atlas, Big Three Industrial Gas & Equipment, Nako. Communications Comsat, Western Union. Containers-Metal Continental Can, Crown Cork & Seal. Cosmetics Alberto-Culver, Avon, Lanvin-Charles of the Ritz. Drugs Merck, Parke Davis, AmericanHospital Supply, American Sterilizer, Carter-Wallac Electronics Texas Instruments, AMP Inc., Burndy Corporation. Savings & Loans Flrst Charter Financial, Glbraltar Financial, Great Western Financial. Foods Campbell Soup, Borden, Kraftco Corp. Machinery Caterpillar Tractor, Clark EqUlpment. Office Equipment Addressograph, Computer Sciences, International Business Machines, Sperry Rand, Xerox. Oils Pacific Petroleum, Superior Oil, Standard Oil of Indiana, Royal Dutch. PaPers Mead Corp., International Paper, Union Camp Corp., Westvaco. Retailing Federated Dept. Stores, Sears Roebuck, Jewel Companies, Von's Grocery. Dow-Jones Ind. 852. 25 Dow-Jones Rails 205. 58 ANTHONY W. T ABELL WALSTON & CO. INC. ThiS m,arket It'ttcr IS published for your convemence ami In(orlllll(lOll and not an o1T(t to sdl or a ItltlOn tu 10\1\ ,lin rll …cussed The In. formatIOn was obtamed from sources we bch('v( to he rt'lmblp, hut v.e do not IUllr.1Il1ee Its aCCUrIlC, \\'.II;ton & Co. Inc and lts officel),!J llre.tQrs or employees may have an mter(!!;lt m or Imrchase and bell thl' 'll'(.untl(,'l l('ferred to herCIn. t' ', WN301 –!1 .( .July 11, 1060 ALL I The prcclpitolls market decline of the past two clays comlDg on top of ./ the deeply oversold condition which had been reached on .June 27th points' strongly to the following conclusions. (1) The market IS probably going lower. (2) The bottom when it occurs will be of at least inter-mediate term,and quite possllJly, major proportions. The present 'wultiple climax selling waves,from a teclmical pomt of view in other words,are strongly rcminiscent of major market lows such as 1962 and 1966. As noted above, nearterm possibiltty is for lower prices and a tentative target in terms of the Dow-.Joles Industrial Average would be in the 830-820 range, although it is very difficult in this sort of a market to pinpoint absolute targets for the average. Would, however, he a buyer 0f above-average Issues on clips into that range and would in addition suggest purchases on any evidence of a climax reversal, i. e., a sharp drop followed by an equally sharp recovery both on above average volume. At the moment the most attractive purchase candtdates are those issues which are holdi ng above their February lows. Industrial groups in which most major tssues fall into this category mclude Cosmetics, Drugs, Office Equipments, Papcrs, Savings & Loans, and Retailers. Woulel strongJy emphasize such issues many buymg program but would set purchase levels blow present market in most cases. Anthony W. N.Y.