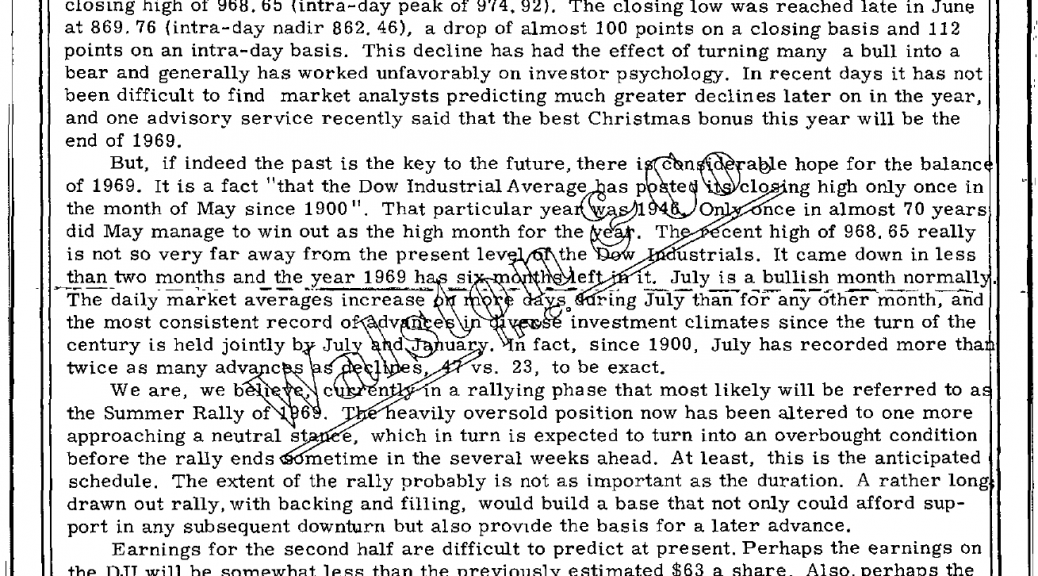 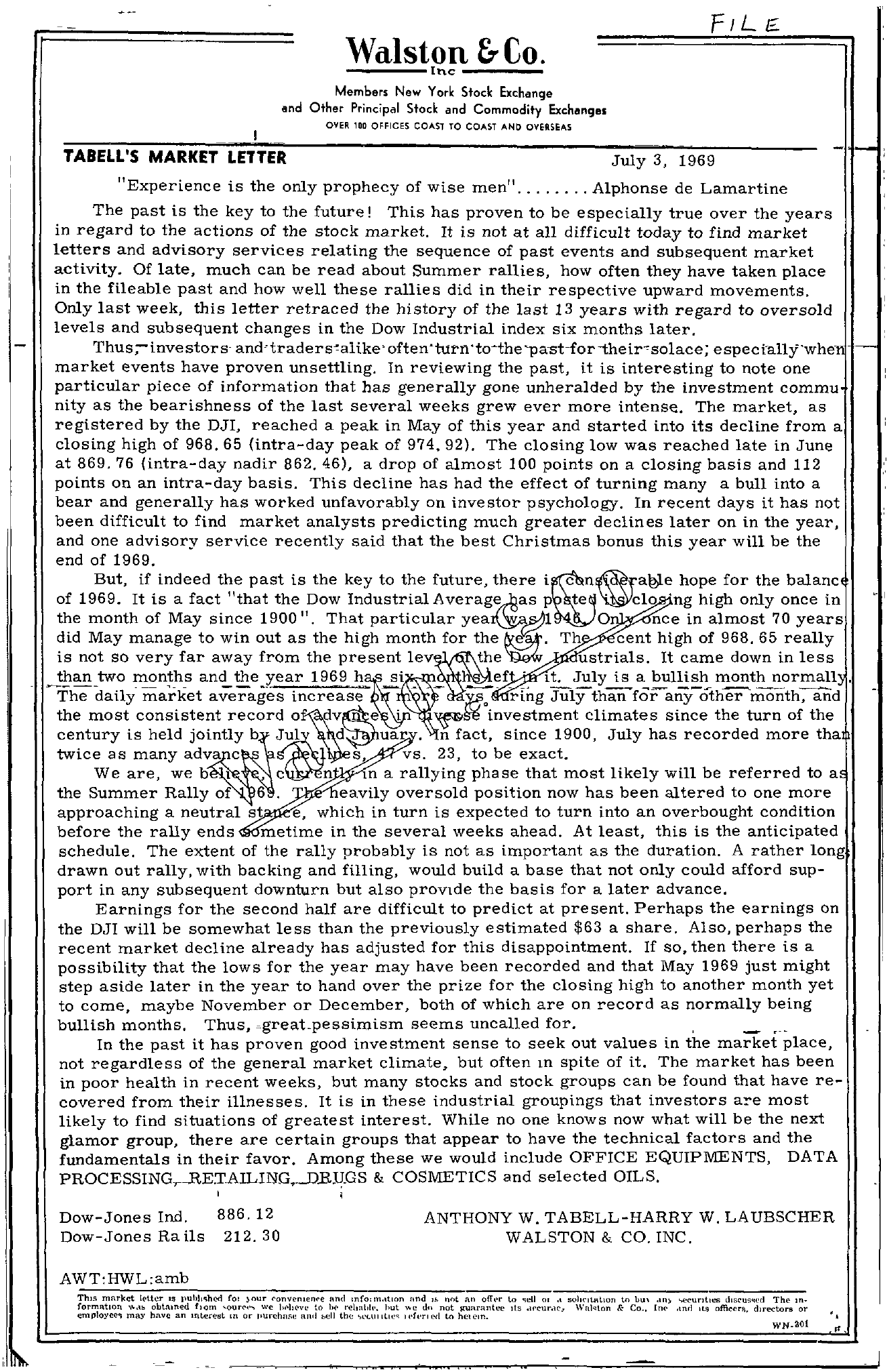 W—-a–l-s-tIoncn–&—-C–o-. Members New York Stock Exchange and Other Principal Stock and Commodity Exchange, OVER 11)0 OFFICES COAST TO COAST AND OVERSEAS TABEll'S MARKET lETTER July 3, 1969 Expen.ence 1. S the 0 nly proph ecy 0 fW'1se men …….. Alphonse de Lamartine The past is the key to the future! This has proven to be especially true over the years in regard to the actions of the stock market. It is not at all difficult today to find market letters and advisory services relating the sequence of past events and subsequent market activity. Of late, much can be read about Summer rallies, how often they have taken place in the fileable past and how well these rallies did in their respective upward movements. Only last week, this letter retraced the history of the last 13 years with regard to oversold levels and subsequent changes in the Dow Industrial index six months later. Thus;-investors often'turn 'past-for-their-solace; espectally'whe– market events have proven unsettling. In reviewing the past, it is interesting to note one particular piece of information that has generally gone unheralded by the investment commu nity as the bearishness of the last several weeks grew ever more intense, The market, as registered by the DJI, reached a peak in May of this year and started into its decline from a closing high of 968.65 (intra-day peak of 974.92). The closing low was reached late in June at 869. 76 (intra-day nadir 862.46), a drop of almost 100 points on a closing basis and 112 points on an intra-day basis. This decline has had the effect of turning many a bull into a bear and generally has worked unfavorably on investor psychology. In recent days it has not been difficult to find market analysts predicting much greater declines later on in the year, and one advisory service recently said that the best Christmas bonus this year will be the end of 1969. But, if indeed the past is the key to the future, there hope for the balanc of 1969. It is a fact that the Dow Industrial p te 'ng high only once in the month of May since 1900. That particular 0 nce in almost 70 years did May manage to win out as the high month for the Th cent high of 968. 65 really is not so very far away from the present ustrials. It came down in less than two months and the year 1969 ef . 1t. July is a bullish month normall market averages increase – – — .p.o – -rIng JulY-than forarlYother-month, and the most consistent record i investment climates Since the turn of the century is held jointly b n fact, since 1900, July has recorded more tha twice as many adva c s, vs. 23, to be exact. We are, we b I C n n a rallying phase that most likely will be referred to a the Summer Rally of 6. eavily oversold position now has been altered to one more approaching a neutral st e, which in turn is expected to turn into an overbought condition before the rally ends metime in the several weeks ahead. At least, this is the anticipated schedule. The extent of the rally probably is not as important as the duration. A rather long drawn out rally, with backing and filling, would build a base that not only could afford sup- port in any subsequent downturn but also prov1de the basis for a later advance, Earnings for the second half are difficult to predict at present. Perhaps the earnings on the DJI will be somewhat less than the previously estimated 63 a share. Also, perhaps the recent market decline already has adjusted for this disappointment. If so, then there is a possibility that the lows for the year may have been recorded and that May 1969 just might step aside later in the year to hand over the prize for the closing high to another month yet to come, maybe November or December, both of which are on record as normally being bullish months, Thus, cgreaLpessimism seems uncalled for. , . In the past it has proven good investment sense to seek out values in the market place, not regardless of the general market climate, but often m spite of it. The market has been in poor health in recent weeks, but many stocks and stock groups can be found that have re- covered from their illnesses. It is in these industrial groupings that investors aoe most likely to find situations of greatest interest. While no one knows now what will be the next glamor group, there are certain groups that appear to have the technical factors and the fundamentals in their favor. Among these we would include OFFICE EQUIPMENTS, DATA PROCESSING,-RET.AILING,..JJRUGS & COSMETICS and selected OILS. ,- I Dow-Jones Ind. 886.12 Dow-Jones Ra ils 212.30 ANTHONY W. TABELL-HARRY W. LAUBSCHER WALSTON & CO. INC. AWTHWLamb ThIS market letter IS lluhho;hed fOI ('onYemenl'(' lind mfOlm.ltlOn nnd J.!. not nn offl'r to 'leU 01 .-I sohrlU\hon to bu\ ,111) 'e('untu.'S lhseus'Il'd The in- formatIOn ,,\I obtnlned flom '-OUf(',…, WI'' 1,,'II('\'1' to h(' rehablt,. hut I' tin not ltUarantee Its .11'('ur.I('3 \\-'III;lon & Coo. In(' ,inri Ils offieerl!. (hrectors or cmploy'1 may have an Interest III or urehuse and bell the W(.\lI Ltll' ll'fl'r! I'd to helem. WN.aOl