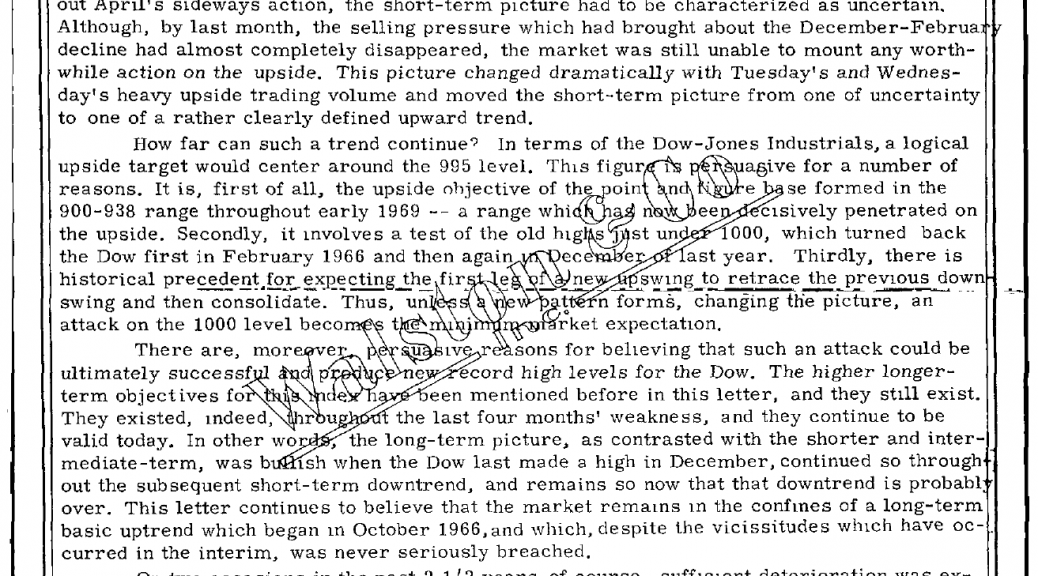 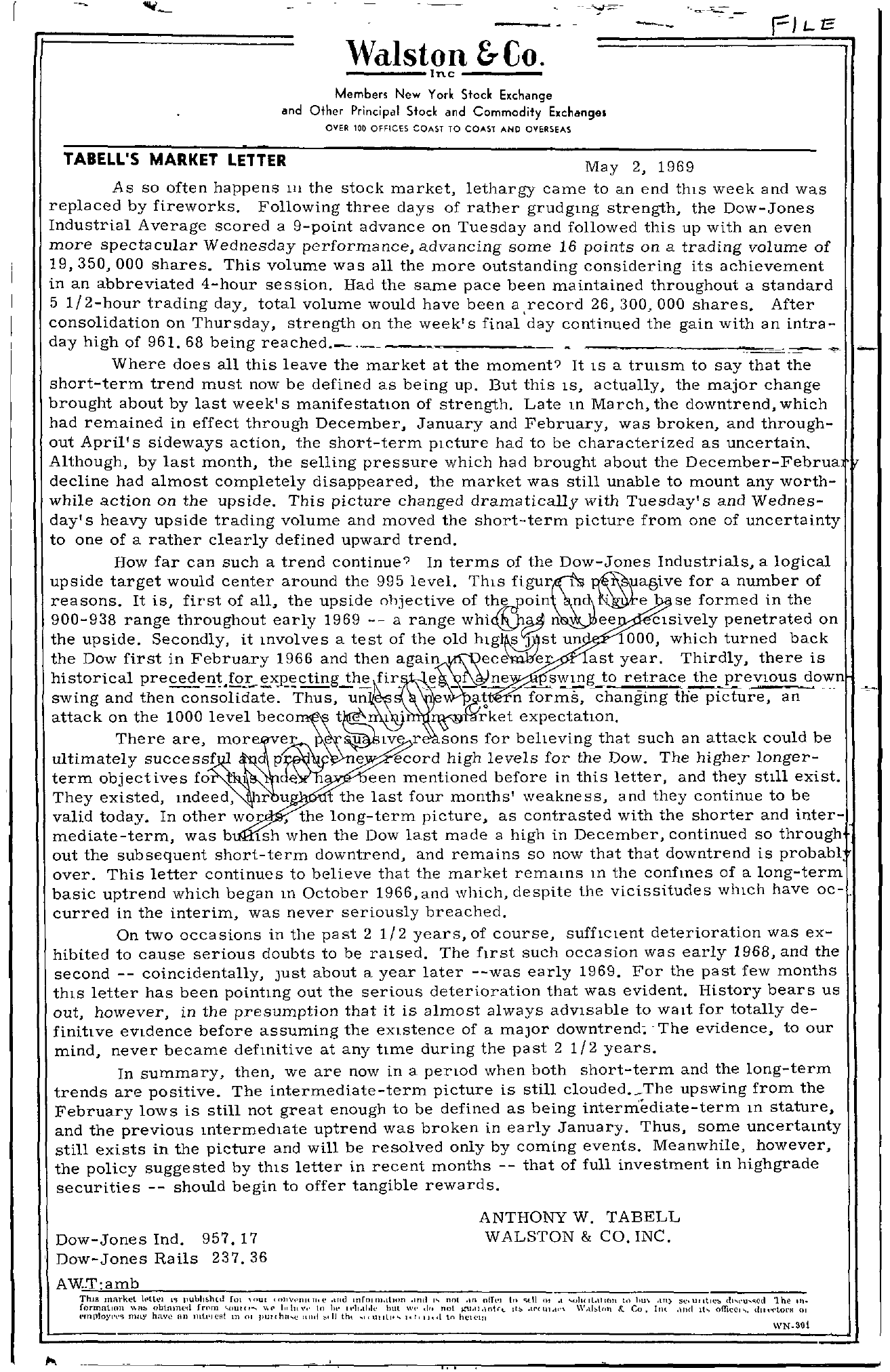 Walston &Co. Inc Members New York Stock Exchange and Other Principal Stock and Commodity Exchange. OVER 100 OFFICES COAST TO COAST ANO OVERSEAS — – TABELL'S MARKET LETTER May 2, 1969 As so often happens III the stock market, lethargy came to an end thlS week and was replaced by fireworks. Following three days of rather grudgmg strength, the Dow-Jones Industrial Average scored a 9-point advance on Tuesday and followed this up with an even more spectacular Wednesday performance, advancing some 16 points on a trading volume of 19,350,000 shares. This volume was all the more outstanding considering its achievement in an abbreviated 4-hour session. Had the same pace been maintained throughout a standard 5 1/2-hour trading day, total volume would have been a record 26,300,000 shares. After consolidation on Thursday, strength on the week's final'day continued the gain with an intraday high of 961. 68 being reached. Where does all this leave the market at the moment It IS a trUlsm to say that the — short-term trend must now be defined as being up. But this IS, actually, the major change brought about by last week's manifestatlOn of strength. Late m March, the downtrend, which had remained in effect through December, January and February, was broken, and through- out April's sideways action, the short-term plcture had to be characterized as uncertain. Although, by last month, the selling pressure which had brought about the December-Februa decline had almost completely disappeared, the market was still unable to mount any worth- while action on the upside. This picture changed dramatically with Tuesday's and Wednes- day's heavy upside trading volume and moved the short-term picture from one of uncertainty to one of a rather clearly defined upward trend. How far can such a trend continue In terms of the Dow-Jones Industrials, a logical upside target would center around the 995 level. Thls for a number of reasons. It is, first of all, the upside ohjective of thJJ'0in n se formed in the 900-938 range throughout early 1969 — a range n ee clsively penetrated on the upside. Secondly, it mvolves a test of the old un 1000, which turned back the Dow first in February 1966 and then ast year. Thirdly, there is historical swing and then consolidate. Thus, un 1!…e retrace the n forms, changing tne picture, an attack on the 1000 level 1 expectatton. There er r sons for believing that such an attack could be ultimately successf term objectives fo IN-fu e ecord high levels for the Dow. The higher longereen mentioned before in this letter, and they sttll exist. They existed, mdeed, r u the last four months' weakness, and they continue to be valid today, In other wo ,the long-term picture, as contrasted with the shorter and inter- mediate-term, was b Ish when the Dow last made a high in December, continued so through out the subsequent short-term downtrend, and remains so now that that downtrend is probabl over. This letter continues to believe that the market remams m the confmes of a long-term basic uptrend which began m October 1966, and which, despite the vicissitudes willch have oc- curred in the interim, was never seriously breached. On two occasions in the past 2 1/2 years, of course, sufflclent deterioration was ex- hibited to cause serious doubts to be ralsed. The flrst such occasion was early 1968, and the second — coincidentally, Just about a year later –was early 1969. For the past few months thlS letter has been pointmg out the serious deterioration that was evident. History bears us out, however, in the presumption that it is almost always advIsable to walt for totally de- finitive eVldence before assuming the eXlstence of a maJor downtrend; -The evidence, to our mind, never became defmitive at any ttme during the past 2 1/2 years. In summary, then, we are now in a perlOd when both short-term and the long-term trends are positive. The intermediate-term picture is still clouded.The upswing from the February lows is still not great enough to be defined as being intermediate-term m stature, and the previous mtermedlate uptrend was broken in early January. Thus, some uncertamty still exists in the picture and will be resolved only by coming events. Meanwhile, however, the policy suggested by thIS letter in recent months — that of full investment in highgrade securities — should begin to offer tangible rewards. Dow-Jones Ind. 957. 17 Dow-Jones Rails 237.36 ANTHONY W. TABELL WALSTON & CO. INC. AW.Tamb This mnrket \ptlt'l 1'1 puhh&hll\ fOi ,nUL ,nllVI1I'Il,l' .,ud ,nrnlfl),ltlnn .In!! 110t .111 (lITt'l In ;tll 'II .1 'IUIL.lllflll tn l.u, .In) St',UItlt'l !I,,'u-.;cd 'lhe In formation \\lIl oiltmnei frnm ,ou, …. \\P 1,,11\' 10 II., 'II,tI,lt, hut w.' .I liot 1l\l.1l,lnlcl- It& .1('(UI.l'\ \\',110.101 K. C(), Int ,Iud dll.'rWrH QI l'rnnloy,', mlLY have all mh'JCHt III 01 IUl,hH,c and ,.11 th\ l.l'II,d tn hCll'ln ., .