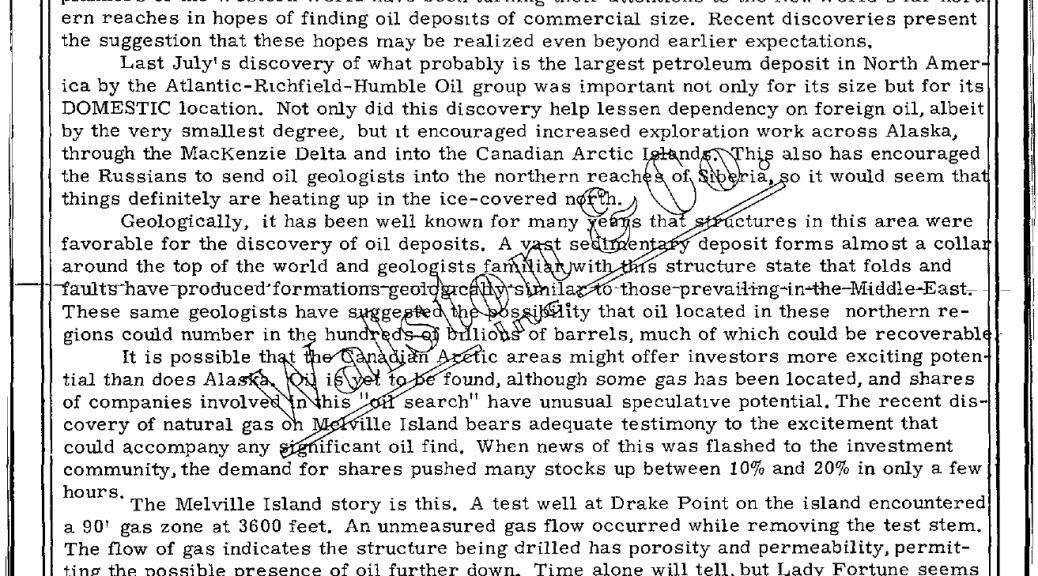 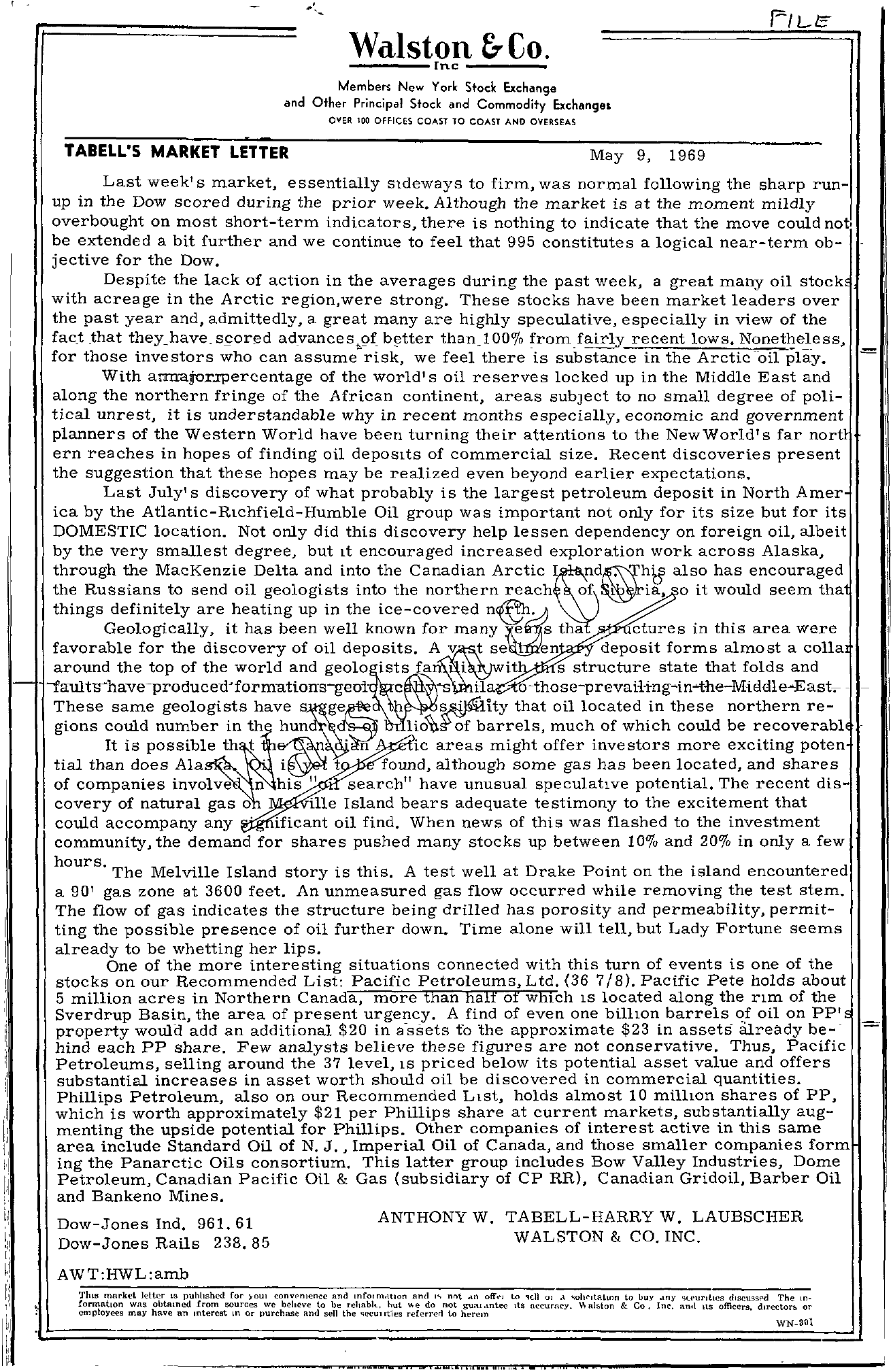 – Walston &Co. Inc Members New York Stock Exchange and Other Principal Stock and Commodity Exchange. OVER 100 OFFICES COAST TO COAST AND OVERSEAS FILe TABEll'S MARKET lETTER May 9, 1969 Last week's market, essentially sIdeways to firm, was normal following the sharp run- up in the Dow scored during the prior week. Although the market is at the moment mildly overbought on most short-term indicators, there is nothing to indicate that the move could not. be extended a bit further and we continue to feel that 995 constitutes a logical near-term ob- jective for the Dow. Despite the lack of action in the averages during the past week, a great many oil stock with acreage in the Arctic region,were strong. These stocks have been market leaders over the past year and, admittedly, a great many are highly speculative, especially in view of the faet that they,have advances.of better than,1000/0 from fairly recent lows. Nonetheless, for those investors who can assume-risk, we feel there is substance in the Arctic 'oil play. With amrajor.rpercentage of the world's oil reserves locked up in the Middle East and along the northern fringe of the African continent, areas subJect to no small degree of poli- tical unrest, it is understandable why in recent months especially, economic and government planners of the Western World have been turning their attentions to the NewWorld's far nort ern reaches in hopes of finding oil depOSIts of commercial size. Recent discoveries present the suggestion that these hopes may be realized even beyond earlier expectations. Last July's discovery of what probably is the largest petroleum deposit in North Amer ica by the Atlantic-Rtchfield-Humble Oil group was important not only for its size but for its DOMESTIC location. Not only did this discovery help lessen dependency on foreign oil, albeit by the very smallest degree, but It encouraged increased exploration work across Alaska, through the MacKenzie Delta and into the Canadian Arctic also has encouraged the Russians to send oil geologists into the northern reach of 0 it would seem tha things definitely are heating up in the ice-covered Geologically, it has been well known for many e S tha ctures in this area were favorable for the discovery of oil deposits. se en deposit forms almost a colla around the top of the world and sts fa 1 i it Ia!llts-have—produce-d'formations-geot -c –s Ha s structure state that folds and ' These same geologists have sl.m'iity that oil located in these northern re- gions could number in th hun It is possible th t .n barrels, much of which could be recoverabl ic areas might offer investors more exciting poten tial than does Ala – t found, although some gas has been located, and shares of companies involve n his search have unusual speculative potential. The recent dis- covery of natural gas 0 iIle Island bears adequate testimony to the excitement that could accompany any ificant oil find. When news of this was flashed to the investment community, the demand for shares pushed many stocks up between 10 and 20 in only a few hours. The Melville Island story is this. A test well at Drake Point on the island encountered a 90' gas zone at 3600 feet. An unmeasured gas flow occurred while removing the test stem. The flow of gas indicates the structure being drilled has porosity and permeability, permit- ting the possible presence of oil further down. Time alone will tell, but Lady Fortune seems already to be whetting her lips. One of the more interesting situations connected with this turn of events is one of the stocks on our Recommended List Pacific Petroleums, Ltd. (36 7/8). Pacific Pete holds about 5 million acres in Northern Canada, more than half of whtch IS located along the rtm of the Sverdrup Basin, the area of present urgency. A find of even one billton barrels of oil on PP' property would add an additional 20 in assets fo the approximate 23 in assets already be- hind each PP share. Few analysts believe these figures are not conservative. Thus, Pacific Petroleums, selling around the 37 level, IS priced below its potential asset value and offers substantial increases in asset worth should oil be discovered in commercial quantities. Phillips Petroleum, also on our Recommended Ltst, holds almost 10 millIOn shares of PP, which is worth approximately 21 per Phillips share at current markets, substantially augmenting the upside potential for Phillips. Other companies of interest active in this same area include Standard Oil of N. J. , Imperial Oil of Canada, and those smaller companies form ing the Panarctic Oils consortium. This latter group includes Bow Valley Industries, Dome Petroleum, Canadian Pacific Oil & Gas (subsidiary of CP RR), Canadian Gridoil, Barber Oil and Bankeno Mines. Dow-Jones Ind. 961. 61 Dow-Jones Rails 238.85 ANTHONY W. TABELL-HARRY W. LAUBSCHER WALSTON & CO. INC. AWTHWLamb This mnrket letter IS Jlubhshed for OUI conv(nlencc and mforffiltlOn and 1, nnt .111 off1 to 9(11 Ol ,I to buv .lny '(.l'uraLws dlscussPd The tn- formntLOn wns obtamed from sources we believe to be hut …. e do !lot gu\I,mtec Its Ilccuracy. \\Rlston & Co Jnc, an.\ Its officers. dIrector! or employees may have nn Interest m or I)urchase and sell the HCUlltics rderreri to herein WN3tll I I I I I I I ! I I ……… ',lni 'ii .nl1