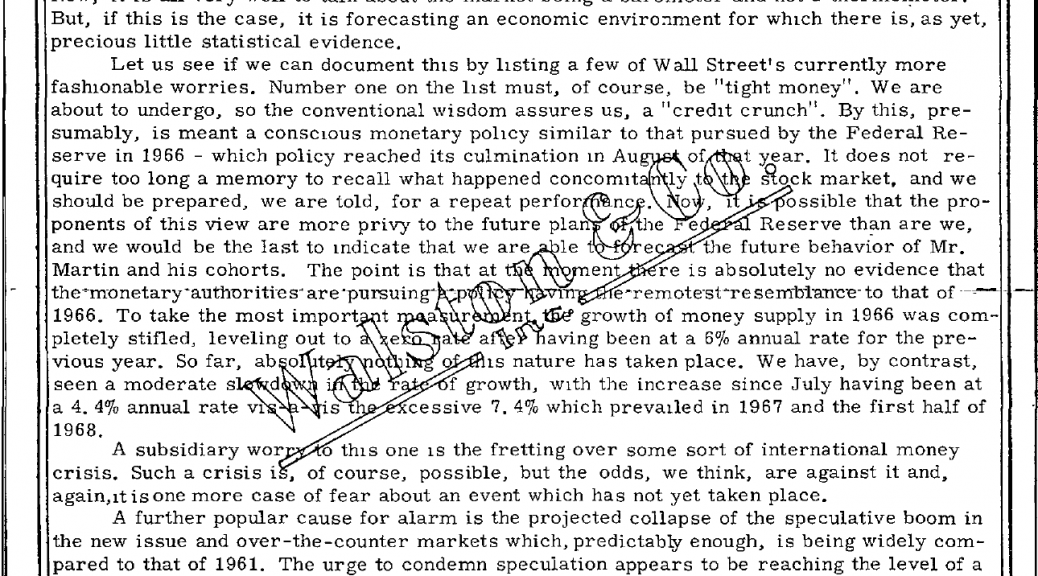 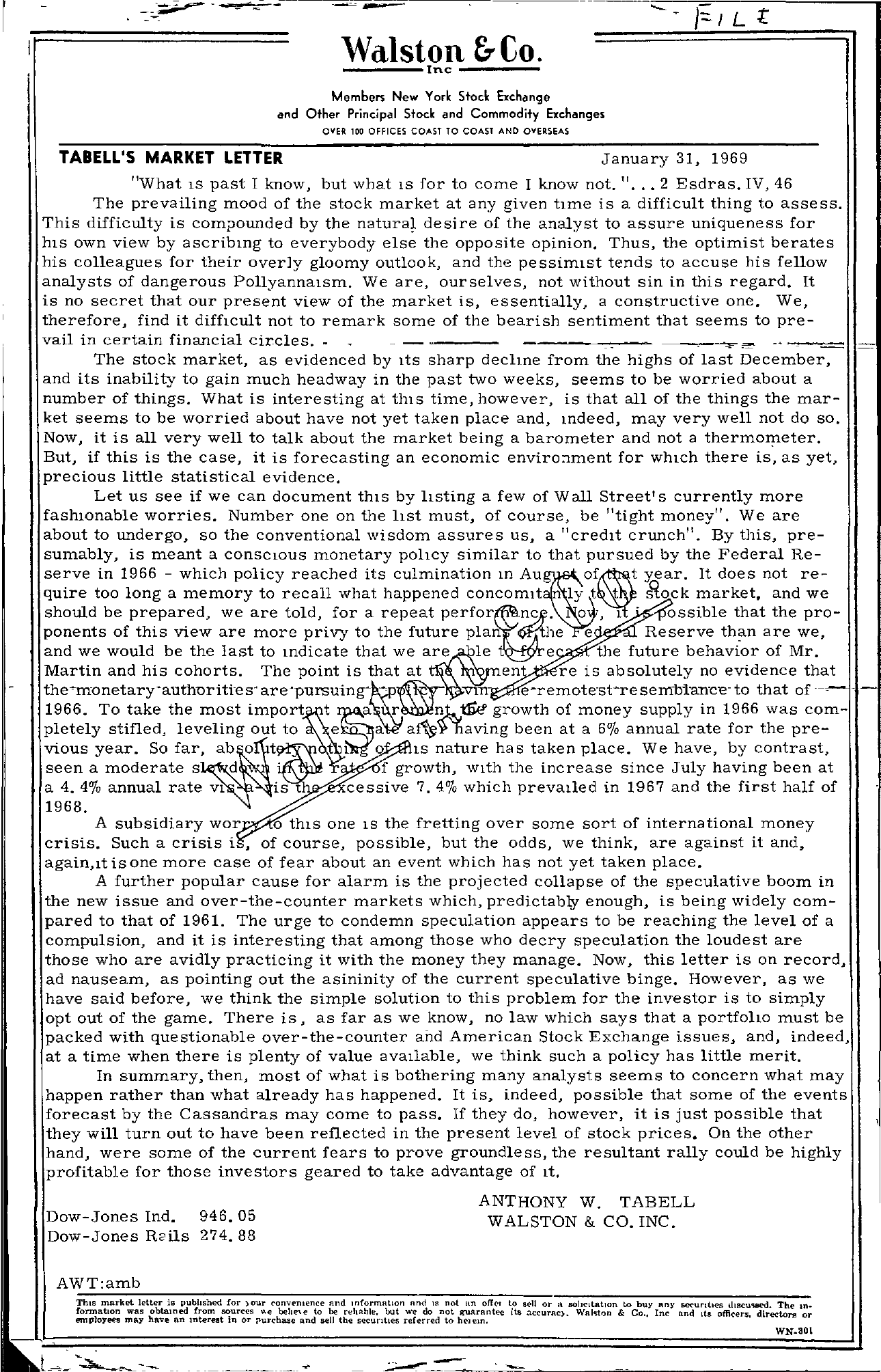 – — –.— Walston &Co. —–Inc —– IL t Members New York Stock Exchange and Other Principal Stock and Commodity Exchanges OVER 100 OFFICES COAST TO COAST AND OVERSEAS TABEll'S MARKET lETTER January 31, 1969 What 1S past I know, but what IS for to come I know not. … 2 Esdras. IV, 46 The prevailing mood of the stock market at any given bme is a difficult thing to assess. This difficulty is compounded by the desire of the analyst to assure uniqueness for h1s own view by ascribing to everybody else the opposite opinion. Thus, the optimist berates his colleagues for their overly gloomy outlook, and the pessimIst tends to accuse his fellow analysts of dangerous Pollyannalsm. We are, ourselves, not without sin in this regard. It is no secret that our present view of the market is, essentially, a constructive one. We, therefore, find it difficult not to remark some of the bearish sentiment that seems to prevail in certain financial circles. The stock market, as evidenced by Its sharp decline from the highs of last December, and its inability to gain much headway in the past two weeks, seems to be worried about a number of things. What is interesting at thIS time, however, is that all of the things the mar- ket seems to be worried about have not yet taken place and, Indeed, may very well not do so. Now, it is all very well to talk about the market being a barometer and not a thermometer. But, if this is the case, it is forecasting an economic enviro1ment for WhICh there is, as yet, precious little statistical evidence. Let us see if we can document thIS by listing a few of Wall Street's currently more fashiOnable worries. Number one on the list must, of course, be tight money. We are about to undergo, so the conventional wisdom assures us, a credIt crunch. By this, pre- sumably, is meant a consciOUS monetary policy similar to that pursued by the Federal Re- serve in 1966 – which policy reached its culmination In Xear. It does not re- quire too long a memory to recall what happened concomlt n ly t 1 Rock market. and we should be prepared, we are told, for a repeat perforanc. 1 0 , 1 – ossible that the pro- Ip,men.ts of this view are more privy to the future plan Qf(the . e Reserve th-n are we, and we would be the last to Indicate that we Ie e the future behavior of Mr. Martin and his cohorts. The point is that at en re is absolutely no evidence that mn e-remote-stTesembl'anc-e-to that of 1966. To take the most pletely stifled, leveling out to e a growth of money supply in 1966 was c having been at a 6 annual rate for the pre- vious year. So 0 t t l 0 IS nature has taken place. We have, by contrast, seen a moderate s d ' f growth, WIth the increase since July having been at a 4.4 annual rate VI is cessive 7.4 which prevaIled in 1967 and the first half of 1968. A subsidiary wor 0 thIS one IS the fretting over some sort of international money crisis. Such a crisis i , of course, possible, but the odds, we think, are against it and, again,lt is one more case of fear about an event which has not yet taken place. A further popular cause for alarm is the projected collapse of the speculative boom in the new issue and over-the-counter markets which, predictably enough, is being widely com- pared to that of 1961. The urge to condemn speculation appears to be reaching the level of a compulsion, and it is interesting that among those who decry speculation the loudest are those who are avidly practicing it with the money they manage. Now, this letter is on record, ad nauseam, as pointing out the asininity of the current speculative binge. However, as we ave said before, we think the simple solution to this problem for the investor is to simply opt out of the game. There is, as far as we know, no law which says that a portfoliO must be with questionable over-the-counter and American Stock Exchange issues, and, at a time when there is plenty of value avaIlable, we think such a policy has little merit. In summary, then, most of what is bothering many analysts seems to concern what may 111'''-1'.1'''11 rather than what already has happened. It is, indeed, possible that some of the events forecast by the Cassandras may come to pass. If they do, however, it is just possible that they will turn out to have been reflected in the present level of stock prices. On the other hand, were some of the current fears to prove groundless, the resultant rally could be highly table for those investors geared to take advantage of It. Ind. 946.05 -Jones R2ils 274.88 ANTHONY W. TABELL WALSTON & CO. INC. AWTamb This market letter is published for )our eonvemence and InformRtlon and Ul not 1111 off('l to 9011 or n SOht'Ll&tlOn to buy f\nl' &e-Urtlle5 d18CU'8ed. The In- fonnatton was obtained from …. e behe\(' to be r….1Hl.ble. but we do not guArantee its ;tccuTaC). Wal;ton & Co., Inc nnd Its officers, directors or may have an lntereet lD or pun'base and sell tbe securttles referred to hel em. WN801