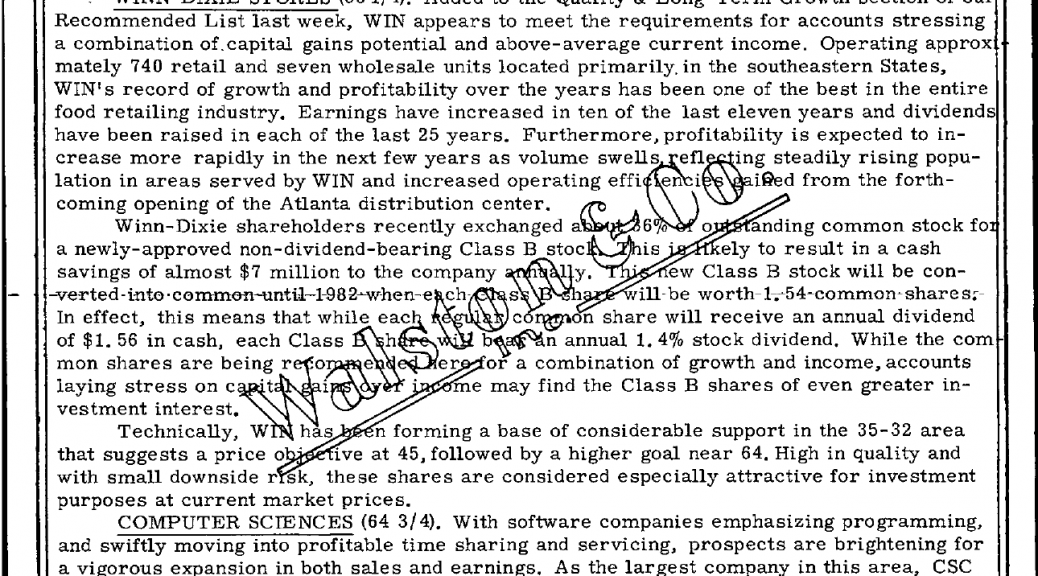 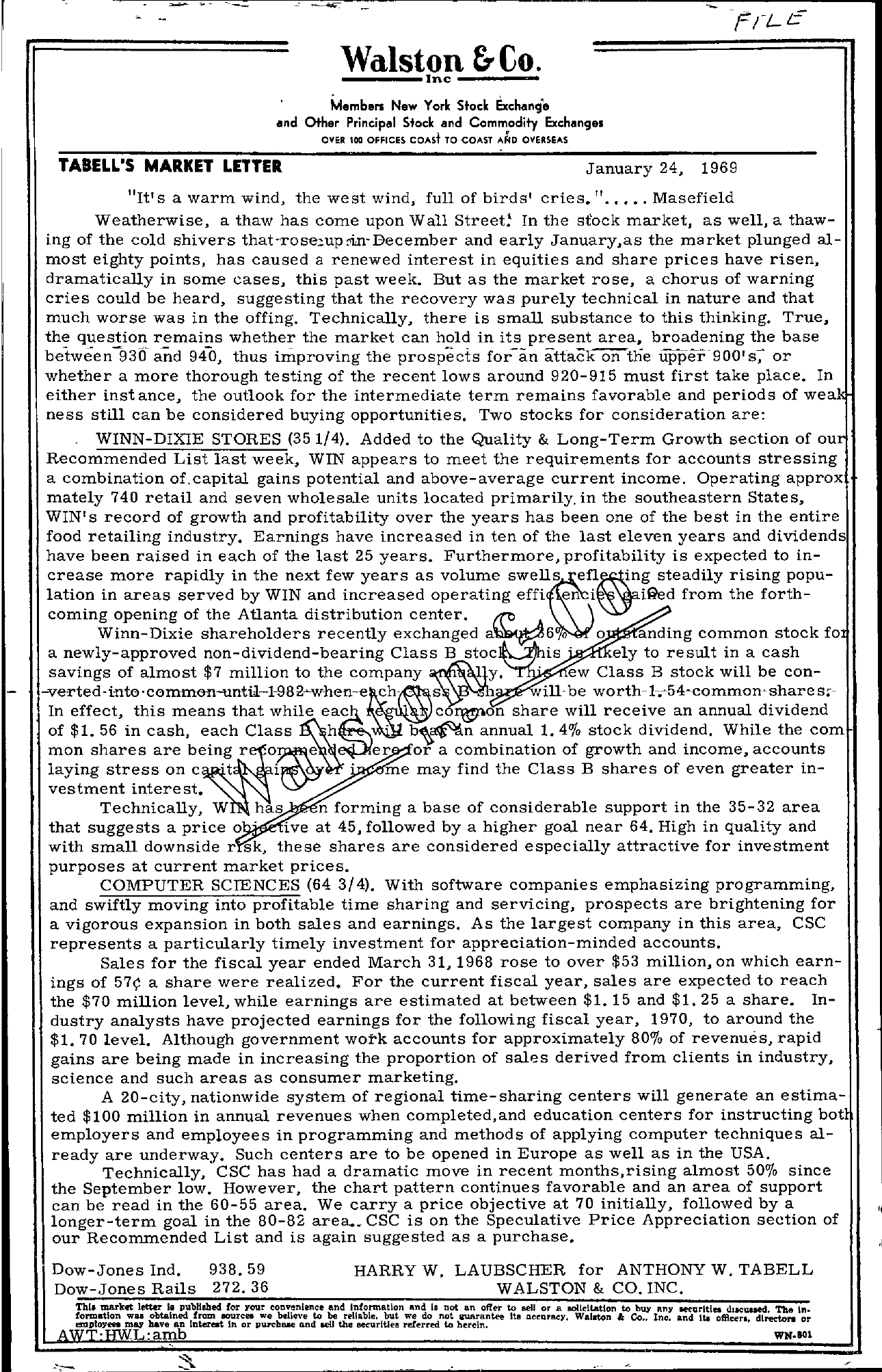 — Walston &- Co. Members New York Stock Exchange and Other Principal Stock and Commodity Exchange. OVER 100 OFFICES COAst TO COAST OVERSeA.S TABEll'S MARKET LETTER January 24, 1969 It's a warm wind, the west wind, full of birds' cries…… Masefield Weatherwise, a thaw has come upon Wall In the stock market, as well, a thaw- ing of the cold shivers and early January,as the market plunged al- most eighty pOints, has caused a renewed interest in equities and share prices have risen, dramatically in some cases, this past week. But as the market rose, a chorus of warning cries could be heard, suggesting that the recovery was purely technical in nature and that much worse was in the offing. Technically, there is small substance to this thinking. True, the question remains whether the market can hold in its present area, broadening the base between-93lf and 94-0, thus improving the prospects for-an attack on the upper-900's; or whether a more thorough testing of the recent lows around 920-915 must first take place. In either inst ance, the outlook for the intermediate term remains favorable and periods of wea ness stlll can be considered buying opportunities. Two stocks for consideration are WINN-DIXIE STORES (351/4). Added to the Quality & Long-Term Growth section of ou Recommended List last week, WIN appears to meet the requirements for accounts stressing a combination of.capital gains potential and above-average current income. Operating approx mately 740 retail and seven wholesale units located primarily, in the southeastern States, WIN's record of growth and profitability over the years has been one of the best in the entire food retailing industry. Earnings have increased in ten of the last eleven years and dividends have been raised in each of the last 25 years. Furthermore, profitability is expected to in- crease more rapidly in the next few years as volume steadily rising popu- lation in areas served by WIN and increased operating effi en i from the forth- coming opening of the Atlanta distribution center. (JO, 11. Winn-Dixie shareholders recently exchanged 0 0 anding common stock fo a newly-approved non-dividend-bearing Class B stoc is . ely to result in a cash savings of almost 7 million to the company . ew Class B stock will be con- – s 1 ill-be In effect, this means that while c share will receive an annual dividend of 1. 56 in cash, each Class . annual 1. 40/0 stock dividend. While the com mon shares are r er or a combination of growth and income, accounts laying stress on c't i . me may find the Class B shares of even greater in- vestment interest. Technically, W has n forming a base of considerable support in the 35-32 area that suggests a price o' ive at 45, followed by a higher goal near 64. High in quality and with small downside r sk, these shares are considered especially attractive for investment purposes at current market prices. COMPUTER SCIENCES (64 3/4). With software companies emphasizing programming, and swiftly moving into profitable time sharing and servicing, prospects are brightening for a vigorous expansion in both sales and earnings. As the largest company in this area, CSC represents a particularly timely investment for appreciation-minded accounts. Sales for the fiscal year ended March 31,1968 rose to over 53 million, on which earn- ings of a share were realized. For the current fiscal year, sales are expected to reach the 70 million level, while earnings are estimated at between 1. 15 and 1. 25 a share. In- dustry analysts have projected earnings for the following fiscal year, 1970, to around the 1. 70 level. Although government work accounts for approximately 800/0 of revenues, rapid gains are being made in increasing the proportion of sales derived from clients in industry, science and such areas as consumer marketing. A 20-city, nationwide system of regional time-sharing centers will generate an estima- ted 100 million in annual revenues when completed,and education centers for instructing bot employers and employees in programming and methods of applying computer techniques al- ready are underway. Such centers are to be opened in Europe as well as in the USA. Technically, CSC has had a dramatic move in recent months,rising almost 500/0 since the September low. However, the chart pattern continues favorable and an area of support can be read in the 60-55 area. We carry a price objective at 70 initially, followed by a longer-term goal in the 80-82 area. CSC is on the Speculative Price Appreciation section of our Recommended List and is again suggested as a purchase. Dow-Jones Ind. 938.59 Dow-Jones Rails 272.36 HARRY W. LAUBSCHER for ANTHONY W. TABELL WALSTON & CO. INC. Thl. market letter Ie publ1Bhed your convenience and Information And Is not an offer to sell or a aollt!ltatlon to buy flny leeurlttes dlRuued. The In- formation was obtained from eourees we believe to be reliable. but we do not ew'Lrantee Ita Lfi!uraey, Waldon Ie Co., Ine. and It. oftleer. director. or emDlOYees mlQ' have an Intere.t in or pUJ'Cbaae and ael1 the eecurltle.ll referred to herein. . -L amb WH. . . I 'I