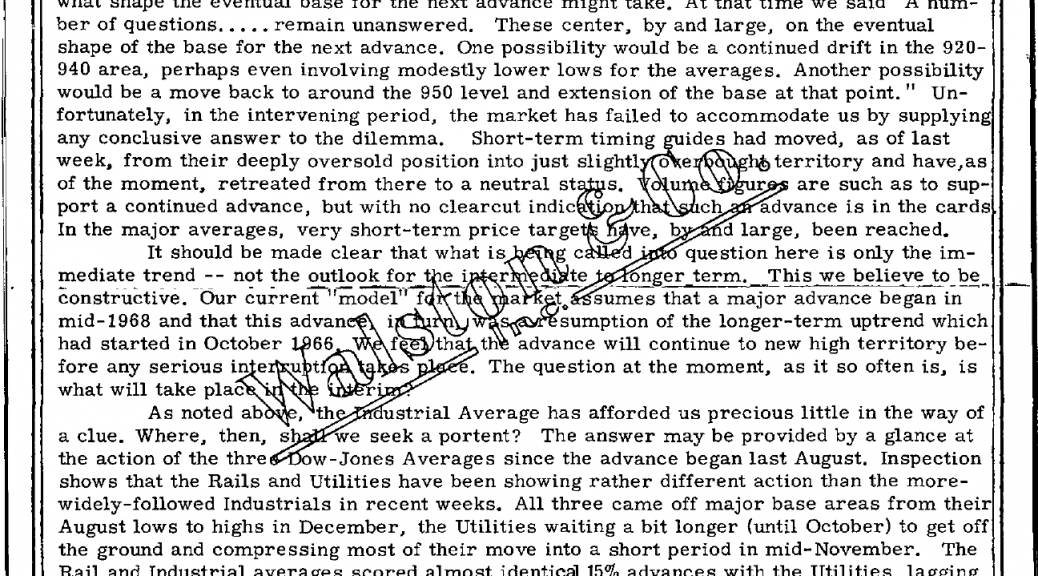 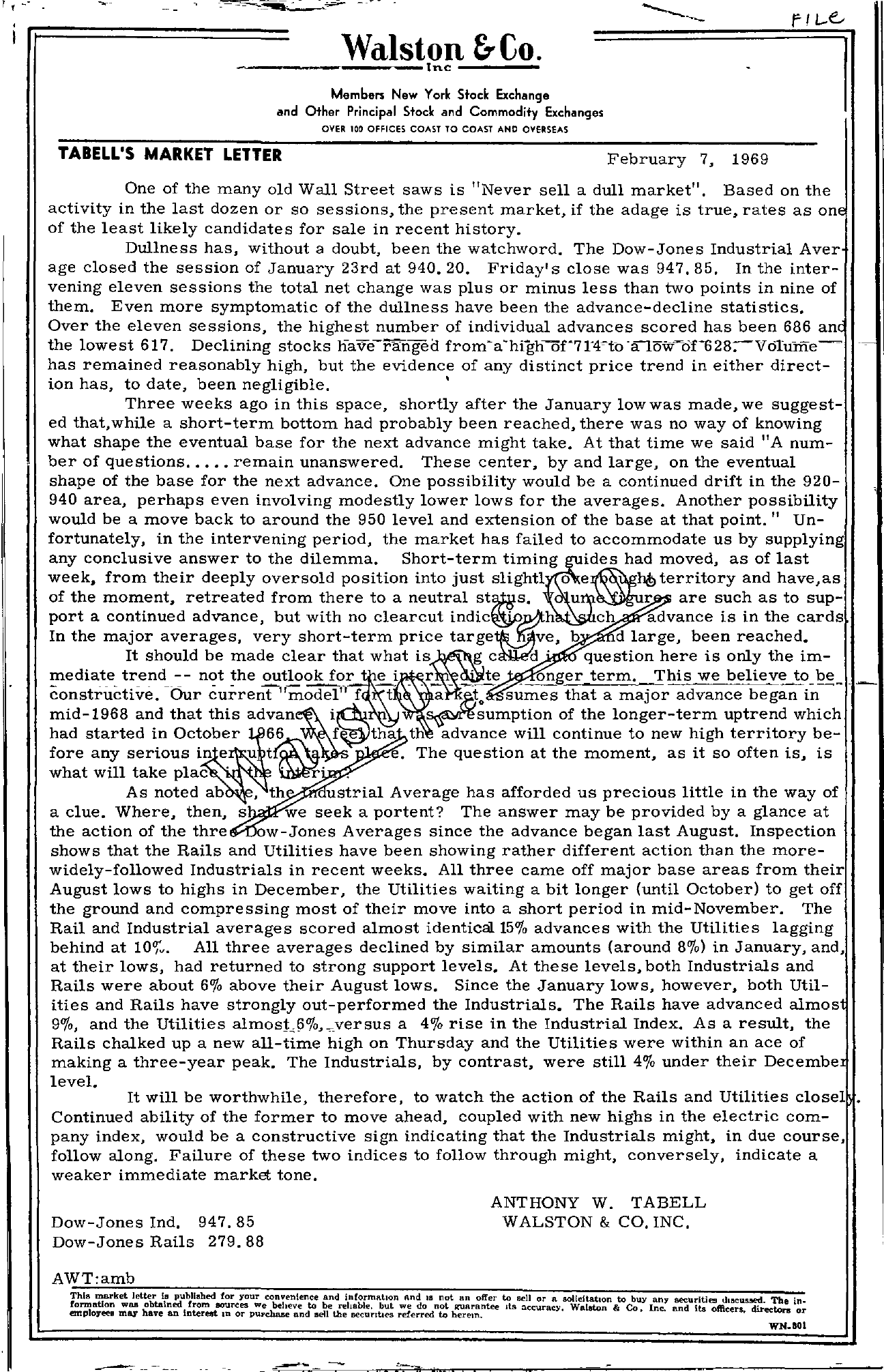 Walston-&–C-o-. f II..-e., Members New York Stock Exchange and Other Principal Stock and Commodity Exchanges OVER 100 OFFICES COAST TO COAST AND OVERSEAS TABELL'S MARKET LETTER February 7, 1969 One of the many old Wall Street saws is Never sell a dull market. Based on the activity in the last dozen or so sessions, the present market, if the adage is true, rates as on of the least likely candidates for sale in recent history. Dullness has, without a doubt, been the watchword. The Dow-Jones Industrial Aver age closed the session of January 23rd at 940.20. Friday's close was 947.85. In the inter- vening eleven sessions the total net change was plus or minus less than two points in nine of them. Even more symptomatic of the dullness have been the advance-decline statistics. Over the eleven sessions, the highest number of individual advances scored has been 686 an the lowest 617. Declining stocks nave-ranged -Volume– has remained reasonably high, but the evidence of any distinct price trend in either direct- ion has, to date, been negligible. Three weeks ago in this space, shortly after the January low was made, we suggest- ed that,while a short-term bottom had probably been reached, there was no way of knowing what shape the eventual base for the next advance might take. At that time we said A num- ber of questions….. remain unanswered. These center, by and large, on the eventual shape of the base for the next advance. One possibility would be a continued drift in the 920- 940 area, perhaps even involving modestly lower lows for the averages. Another possibility would be a move back to around the 950 level and extension of the base at that point. Un- fortunately, in the intervening period, the market has failed to accommodate us by supplying any conclusive answer to the dilemma. Short-term timinides had moved, as of last week, from their deeply oversold position into just slightl 0 and have,as of the moment, retreated from there to a neutral u are such as to sup- port a continued advance, but with no clearcut ch advance is in the cards In the major averages, very short-term price b d large, been reached. It should be made clear that what . question here is only the im- mediate trend — not the outlook r constructive. -Our currentmodel f t – – . te onger term. This we believe to be sumes that a major advance begMin– mid-1968 and that this of the longer-term uptrend which had started in October tll advance will continue to new high territory be- fore any serious in e u t e . The question at the moment, as it so often is, is what will take plac . .. As noted ab ,th ustrial Average has afforded us precious little in the way of a clue. Where, then, we seek a portent The answer may be provided by a glance at the action of the thre ow-Jones Averages since the advance began last August. Inspection shows that the Rails and Utilities have been showing rather different action than the more- widely-followed Industrials in recent weeks. All three came off major base areas from their August lows to highs in December, the Utilities waiting a bit longer (until October) to get off the ground and compressing most of their move into a short period in mid-November. The Rail and Industrial averages scored almost identical 150/0 advances with the Utilities lagging behind at 10')'.. All three averages declined by similar amounts (around 8) in January, and, at their lows, had returned to strong support levels. At these levels, both Industrials and Rails were about 6 above their August lows. Since the January lows, however, both Util- ities and Rails have strongly out-performed the Industrials. The Rails have advanced almos 90/0, and the Utilities a 4 rise in the Industrial Index. As a result, the Rails chalked up a newall-time high on Thursday and the Utilities were within an ace of making a three-year peak. The Industrials, by contrast, were still 40/0 under their Decembe level. It will be worthwhile, therefore, to watch the action of the Rails and Utilities closel Continued ability of the former to move ahead, coupled with new highs in the electric com- pany index, would be a constructive sign indicating that the Industrials might, in due course, follow along. Failure of these two indices to follow through might, conversely, indicate a weaker immediate market tone. Dow-Jones Ind. 947.85 Dow-Jones Rails 279.88 ANTHONY W. TABELL WALSTON & CO. INC. AWTamb This market letter is published for your conY!'nlenee and informalion And 18 not an offer to sell or a solldtatlOn to buy any securitie9 lhacuued Th . formation was obtained trom sources We beheve to be I't!1iable, but we do not guarantee Its J.ccuracy, Walston & Co, Inc. and its offieers. In; employees may have an interest In or pUJ'chase and sell the securities referred to herein. ………, 0 WN.BOl —— —