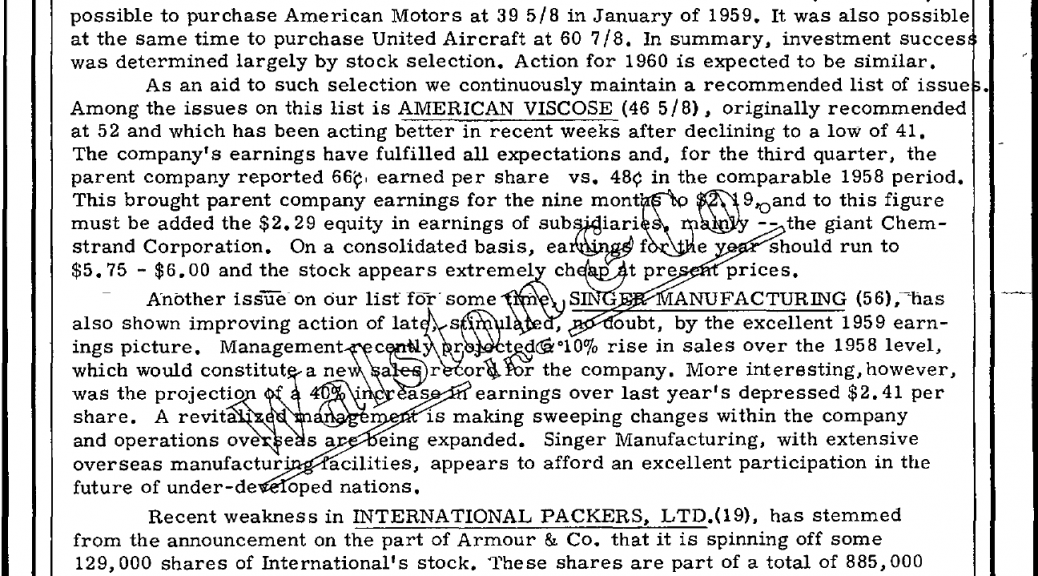 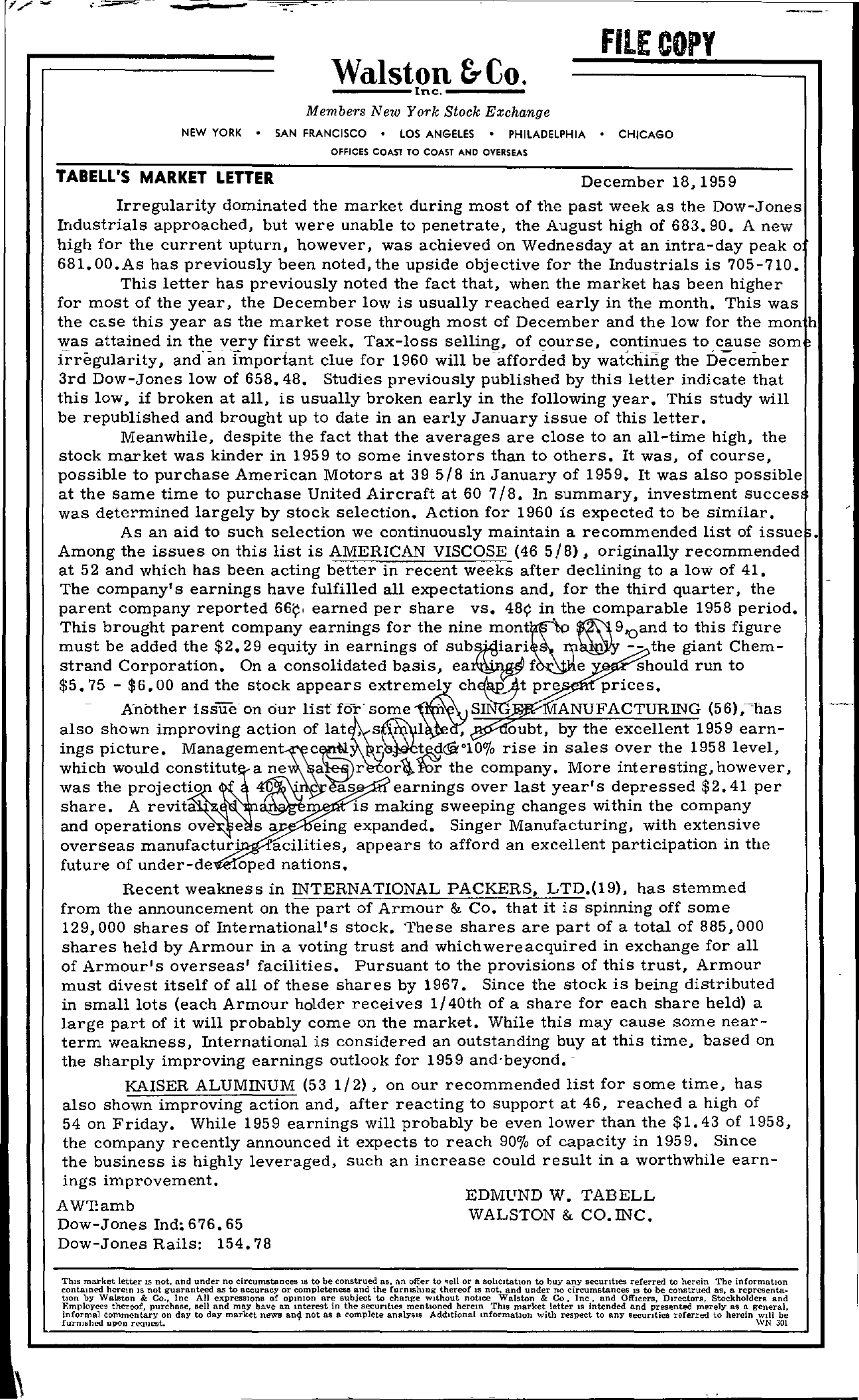 ——– Walston &CO. Inc. Members New York Stock Exchange fiLE COPY NEW YORK SAN FRANCISCO LOS ANGELES PHILADELPHIA CHICAGO OFFICES COAST TO COAST AND OVERSEAS TABELl'S MARKET lETTER December 18,1959 Irregularity dominated the market during most of the past week as the Dow-Jones Industrials approached, but were unable to penetrate, the August high of 683.90. A new high for the current upturn, however, was achieved on Wednesday at an intra-day peak 0 681.00. As has previously been noted, the upside objective for the Industrials is 705-710. This letter has previously noted the fact that, when the market has been higher for most of the year, the December low is usually reached early in the month. This was the cC.se this year as the market rose through most of December and the low for the mon h ,as attained in the very first week. Tax-loss selling, of course, continues to cause som irregularity, and- an fmportant clue for 1960 will be-afforded by watching the December 3rd Dow-Jones low of 658.48. Studies previously published by this letter indicate that this low, if broken at all, is usually broken early in the following year. This study will be republished and brought up to date in an early January issue of this letter. Meanwhile, despite the fact that the averages are close to an all-time high, the stock market was kinder in 1959 to some investors than to others. It was, of course, possible to purchase American Motors at 39 5/8 in January of 1959. It was also possible at the same time to purchase United Aircraft at 60 7/8. In summary, investment succes was determined largely by stock selection. Action for 1960 is expected to be similar. As an aid to such selection we continuously maintain a recommended list of issue Among the issues on this list is AMERICAN VISCOSE (46 5/8), originally recommended at 52 and which has been acting better in recent weeks after declining to a low of 41. The company's earnings have fulfilled all expectations and, for the third quarter, the parent company reported earned per share vs. 48 in the comparable 1958 period. This brought parent company earnings for the nine to this figure must be added the 2.29 equity in earnings of giant Chem- strand Corporation. On a consolidated basis, e should run to 5.!5 – 6.00 stock pre prices. Another lssue on our hst for some SciIrrli ANUFACTURING (56), -has also shown improving action of by the excellent 1959 earn- ings picture. rise in sales over the 1958 level, which would a ne a r the company. More interesting, however, was the as earnings over last year's depressed 2.41 per share. A revita is making sweeping changes within the company and operations a eing expanded. Singer Manufacturing, with extensive overseas acilities, appears to afford an excellent participation in the future of under-de oped nations. Recent weakness in INTERNATIONAL PACKERS, LTD.(19), has stemmed from the announcement on the part of Armour & Co. that it is spinning off some 129,000 shares of International's stock. These shares are part of a total of 885,000 shares held by Armour in a voting trust and whichwere acquired in exchange for all of Armour's overseas' facilities. Pursuant to the provisions of this trust, Armour must divest itself of all of these shares by 1967. Since the stock is being distributed in small lots (each Armour holder receives 1/40th of a share for each share held) a large part of it will probably come on the market. While this may cause some nearterm weakness, International is considered an outstanding buy at this time, based on the sharply improving earnings outlOOk for 1959 and-beyond. – KAISER ALUMINUM (53 1/2), on our recommended list for some time, has also shown improving action and, after reacting to support at 46, reached a high of 54 on Friday. While 1959 earnings will probably be even lower than the 1. 43 of 1958, the company recently announced it expects to reach 900/0 of capacity in 1959. Since the business is highly leveraged, such an increase could result in a worthwhile earn- ings improvement. AWT.amb Dow-Jones 676. 65 EDMl'ND W. TABELL WALSTON & CO. INC. Dow-Jones Rails 154.78 ThIS market letter 15 not, and under no circumstances IS to be construed 116. an offer to 'leU or a solicltatton to buy any secUrities referred to herein The information contamed herem IS not guaranteed as to accuracy or completeness and the Curnlshlng thereof IS not. and under no circumstances IS to be construed as, a rcpresenta tlOn by Walston & Co., Inc All expressions of OPInion are subject to change Without notice Walston & Co, Inc, and Officers, DIrectors, Stockholders and F.mployees thereof, purchase, sell and may have an mterest in the secuntles mentioned herem ThiS market letter IS intended and presented merely as a general, informal commentary on day to day market news and not as a complete analYSIS AddItional mformaiJon with respect to any secunties referred to herein wIll be furnished upon r e q u e s t . ' \\'N 301