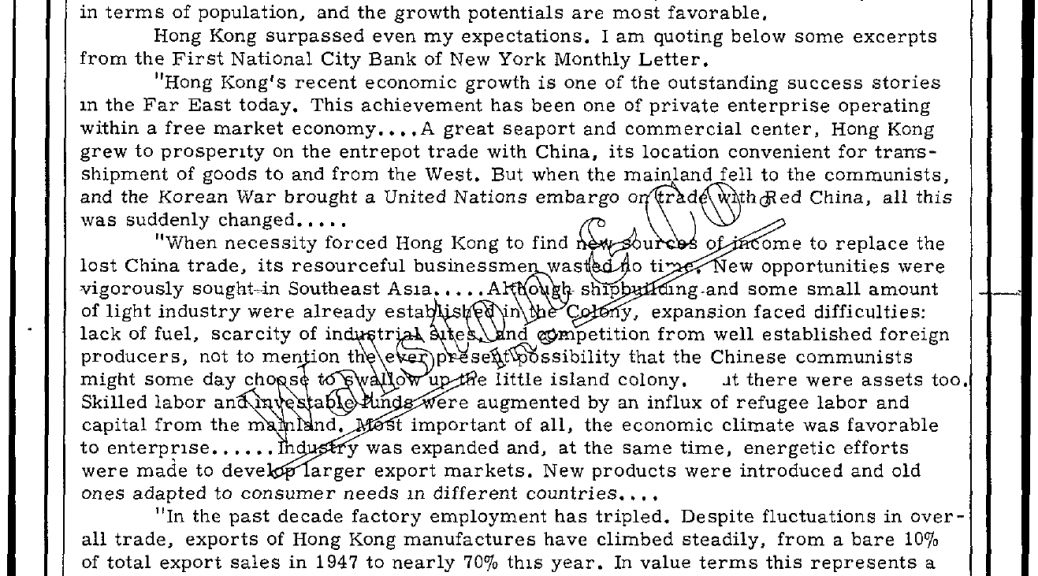 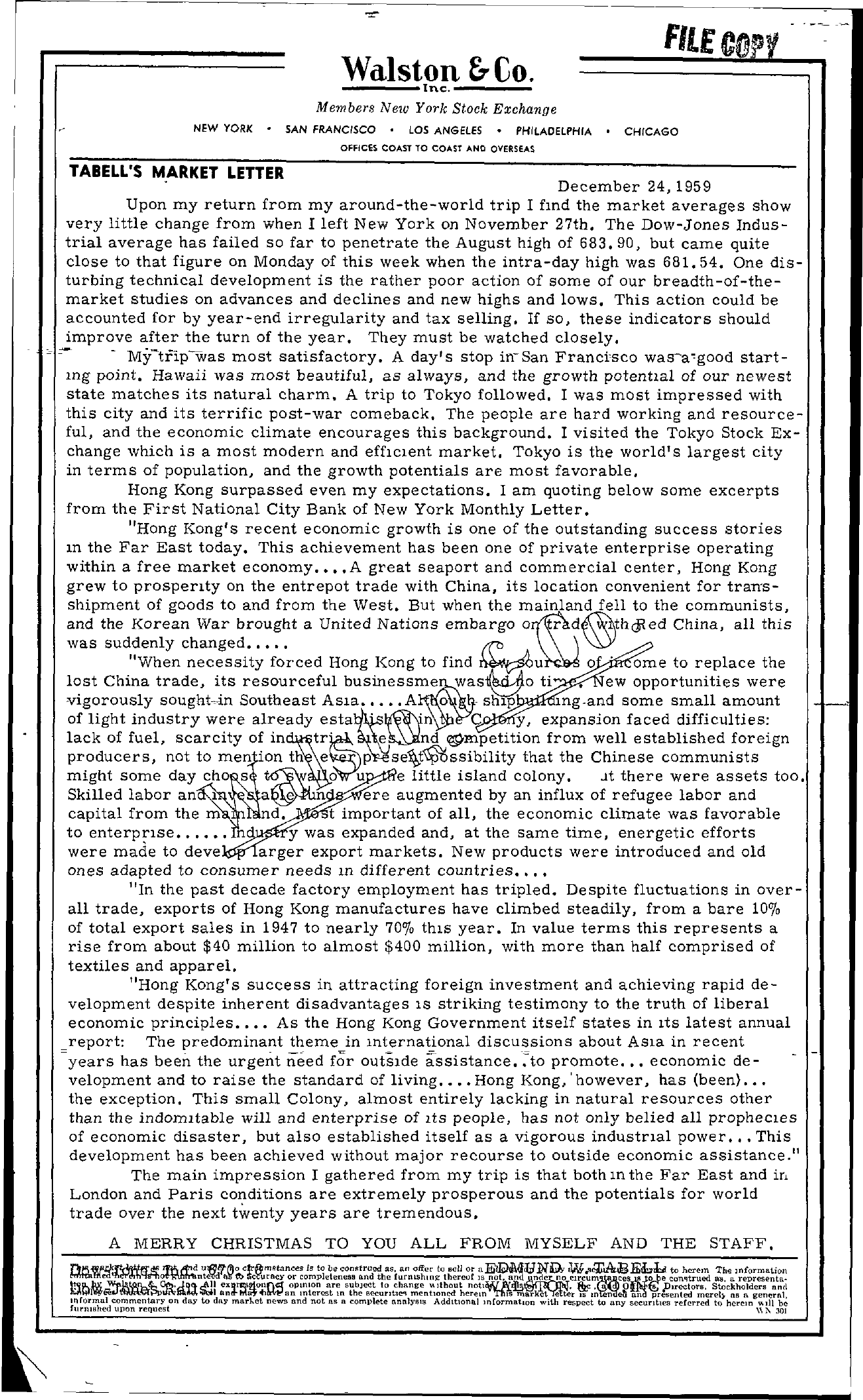 Walston &Co. – – – – – I n c . – – FILE CO Mem bers New York Stock Exchange NEW YORK SAN FRANCISCO lOS ANGELES PHILAOELPHIA CHICAGO OFFICES COAST TO COAST AND OVERSEAS TABELL'S MARKET LETTER December 24, 1959 Upon my return from my around-the-world trip I fmd the market averages show very little change from when I left New York on November 27th. The Dow-Jones Indus- trial average has failed so far to penetrate the August high of 683.90, but came quite close to that figure on Monday of this week when the intra-day high was 681. 54. One dis- turbing technical development is the rather poor action of some of our breadth-of-the- market studies on advances and declines and new highs and lows. This action could be accounted for by year-end irregularity and tax selling. If so, these indicators should improve after the turn of the year. They must be watched closely. – – – Mytripwas most satisfactory. A day's stop in-San Frandsco was-a'good start- Ing point. Hawaii was most beautiful, as always, and the growth potentlal of our newest state matches its natural charm. A trip to Tokyo followed. I was most impressed with this city and its terrific post-war comeback. The people are hard working and resource- ful, and the economic climate encourages this background. I visited the Tokyo Stock Ex- change which is a most modern and efhclent market. Tokyo is the world's largest city in terms of population, and the growth potentials are most favorable. Hong Kong surpassed even my expectations. I am quoting below some excerpts from the First National City Bank of New York Monthly Letter. Hong Kong's recent economic growth is one of the outstanding success stories m the Far East today. This achievement has been one of private enterprise operating within a free market economy A great seaport and commercial center, Hong Kong grew to prospenty on the entrepot trade with China, its location convenient for trans- shipment of goods to and from the West. But when the mainland fell to the communists, and the Korean War brought a United Nations embargo was suddenly changed. . ((D A W China, all this When necessity forced Hong Kong to find o' ome to replace the lost China trade, its resourceful ti ew opportunities were vigorously sougMAn Southeast ASIa A 0 . SlilP mg.and some small amount of light industry were already C y, expansion faced difficulties lack of fuel, scarcity of 'mpetitionfromwellestablishedforeign producers, not to men 'on tli e p that the Chinese communists might some day cho s 0 u e little island colony. .1t there were assets too. Skilled labor an 1 ere augmented by an influx of refugee labor and capital from the m nd. t important of all, the economic climate was favorable to y was expanded and, at the same time, energetic efforts were made to deve arger export markets. New products were introduced and old ones adapted to consumer needs In different countries In the past decade factory employment has tripled. Despite fluctuations in over- all trade, exports of Hong Kong manufactures have climbed steadily, from a bare 100/0 of total export sales in 1947 to nearly 700/0 thIS year. In value terms this represents a rise from about 40 million to almost 400 million, with more than half comprised of textiles and apparel. Hong Kong's success in attracting foreign investment and achieving rapid de- velopment despite inherent disadvantages IS striking testimony to the truth of liberal economic principles As the Hong Kong Government itself states in Its latest annual Jeport The predominant theme in International discussions about ASIa in recent years has been the urgent need for outSIde promote . economic de- velopment and to raise the standard of living Hong Kong, .however, has (been) . the exception. This small Colony, almost entirely lacking in natural resources other than the indomItable will and enterprise of ItS people, has not only belied all prophecIes of economic disaster, but also established itself as a vigorous industnal power This development has been achieved without major recourse to outside economic assistance. The main impression I gathered from my trip is that both In the Far East and ir, London and Paris conditions are extremely prosperous and the potentials for world trade over the next twenty years are tremendous. A MERRY CHRISTMAS TO YOU ALL FROM MYSELF AND THE STAFF. 1nti.And u1RJfl1Tia c!r6llmatanees is to be conRtrued as, at! off.!!' ta scll or uErk.MJJWQr .. to herem The Jnformation tMtb tc'l!'urncy or completeness and oplrllOn are subject the to furmshmg therCQf change 'Ithout n IS ot l Wnotl.VtS no . &. 0 te; pUe!tors, as. a representa Stockholders unci mrormal commentary on day to and-MlifoflMr1!lan Interest In day market news and not as a the securltle1 mentioned hereln'Iilis marKet e complete analysIs AdditIOnal mrormatlOn with ter IS IrI n respect to any an prCBented merel). us a general securities referred to herem 'Ill fllrmshed upon request 1\ 301 -'