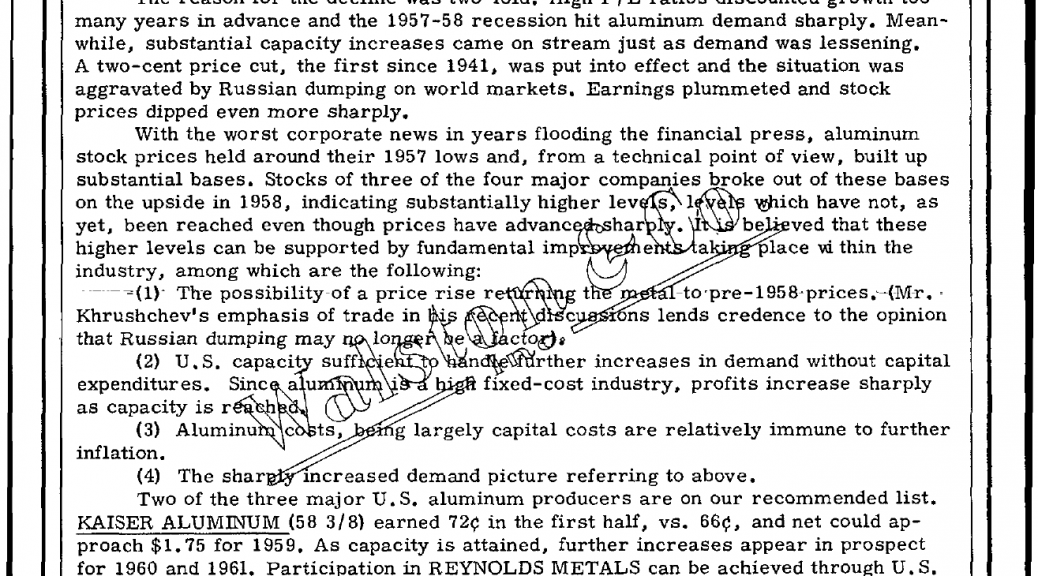 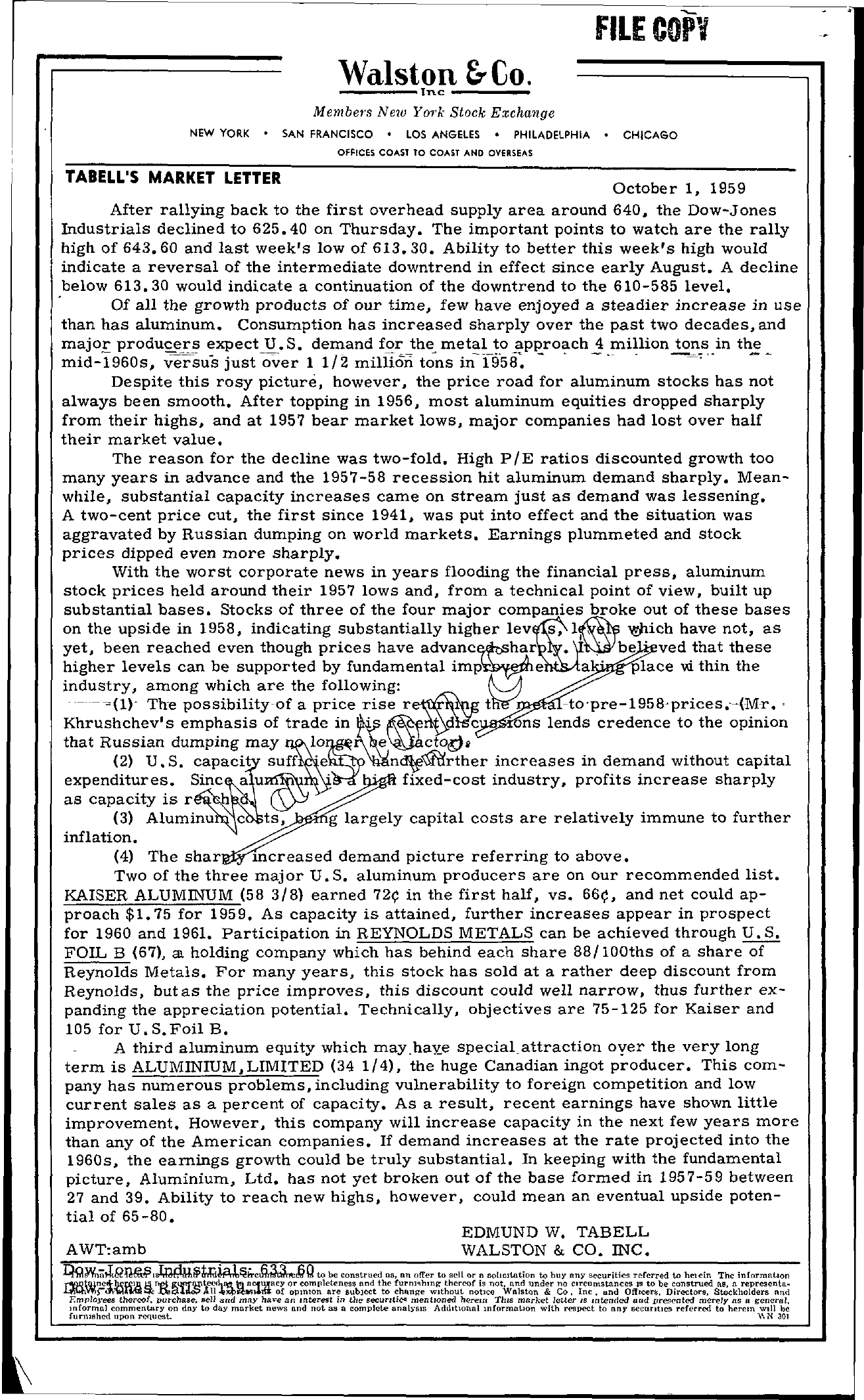 FILE Walston &Co. Inc Members New York Stock Exchange NEW YORK SAN FRANCISCO LOS ANGELES PHILADELPHIA CHICAGO OFFICES COAST TO COAST AND OVERSEAS TABELL'S MARKET LETTER October 1, 1959 After rallying back to the first overhead supply area around 640, the Dow-Jones Industrials declined to 625.40 on Thursday. The important points to watch are the rally high of 643.60 and last week's low of 613.30. Ability to better this week's high would indicate a reversal of the intermediate downtrend in effect since early August. A decline below 613.30 would indicate a continuation of the downtrend to the 610-585 level. Of all the growth products of our time, few have enjoyed a steadier increase in use than has aluminum. Consumption has increased sharply over the past two decades, and major producers expect U. S. demand for the metal to approach 4 million tons in the mid-1960s, versus just over 1 1/2 million to'ns in-r958 – , – ,- – —0– — Despite this rosy picture, however, the price road for aluminum stocks has not always been smooth. After topping in 1956, most aluminum equities dropped sharply from their highs, and at 1957 bear market lows, major companies had lost over half their market value. The reason for the decline was two-fold. High P /E ratios discounted growth too many years in advance and the 1957-58 recession hit aluminum demand sharply. Mean- while, SUbstantial capacity increases came on stream just as demand was lessening. A two-cent price cut, the first since 1941, was put into effect and the situation was aggravated by Russian dumping on world markets. Earnings plummeted and stock prices dipped even more sharply. With the worst corporate news in years flooding the financial press, aluminum stock prices held around their 1957 lows and, from a technical point of view, built up substantial bases. Stocks of three of the four major companies broke out of these bases on the upside in 1958, indicating substantially higher \'thich have not, as iOSyet, been reached even though prices have higher levels can be supported by fundamental industry, among which are the following i\. '/) a l'acveedw.ththaitnththeese Th-e possibility-of a price rise -topre-1958-prices.'-(M-r. – Khrushchev's emphasis of trade in ns lends credence to the opinion that Ru(2s)siaun. dumping may S. capaci!y suff e (// nctW\\ftfrther increases in demand without capital as capac1ty 1S r (Y–Y fixed-cost industry, profits increase sharply (3) g largely capital costs are relatively immune to further inflation. -I (4) The shar Increased demand picture referring to above. Two of the three major U. S. aluminum producers are on our recommended list. KAISER ALUMINUM (58 3/8) earned 72t; in the first half, vs. 66t;, and net could ap- proach 1.75 for 1959. As capacity is attained, further increases appear in prospect for 1960 and 1961. Participation in REYNOLDS METALS can be achieved through U. S. FOIL B (67), al holding company which has behind each share 88/100ths of a share of Reynolds Metals. For many years, this stock has sold at a rather deep discount from Reynolds, butas the price improves, this discount could well narrow, thus further ex- panding the appreciation potential. Technically, objectives are 75-125 for Kaiser and 105 for U. S. Foil B. A third aluminum equity which mayhaye specialattraction oyer the very long term is ALUMINIUM,LIMITED (34 1/4), the huge Canadian ingot producer. This com- pany has numerous problems, including vulnerability to foreign competition and low current sales as a percent of capacity. As a result, recent earnings have shown little improvement. However, this company will increase capacity in the next few years more than any of the American companies. If demand increases at the rate projected into the 1960s, the earnings growth could be truly substantial. In keeping with the fundamental picture, Aluminium, Ltd. has not yet broken out of the base formed in 1957-59 between 27 and 39. Ability to reach new highs, however, could mean an eventual upside poten- tial of 65 -80. AWTamb EDMUND W. TABELL WALSTON & CO. INC. to be construed as, an offer to sell or a sollcltation w buy any securities referred to helein The information -rlQtOlnetl-hcWl);l oxrifJ lu h llCfUARCY or completeness nnd the furm'lhmg thcrro( is not, lind under 110 Circumstances IS to be construed AS, fi representn. of omnlon are sublCd to chltnge Without ootlce Wnlston & Co, Inc, and OfflceI', Directors, Stockholders nnd EmplDyees thereof, rmrchase, sell and may hale an mterest in the securltiCl mentIOned httrem ThiS market letter IS mtended and presented merl!ly as a general, mformal commentary on dny to day market news and not as a complete anah'sls Additional mformatlon with respect to any secuntlCS referred to herem wdl he furnished IIpon request. \\ N 301