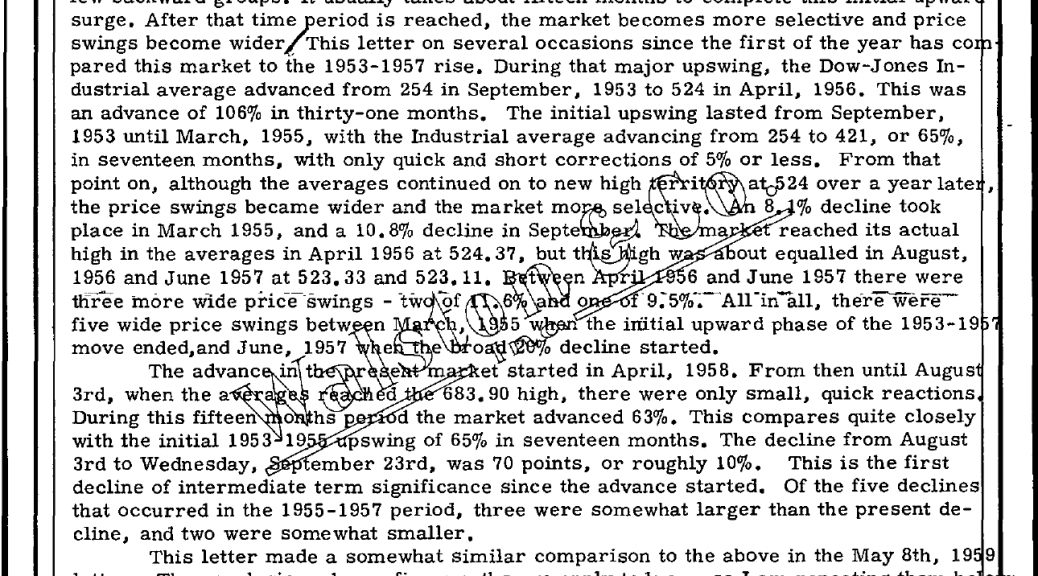 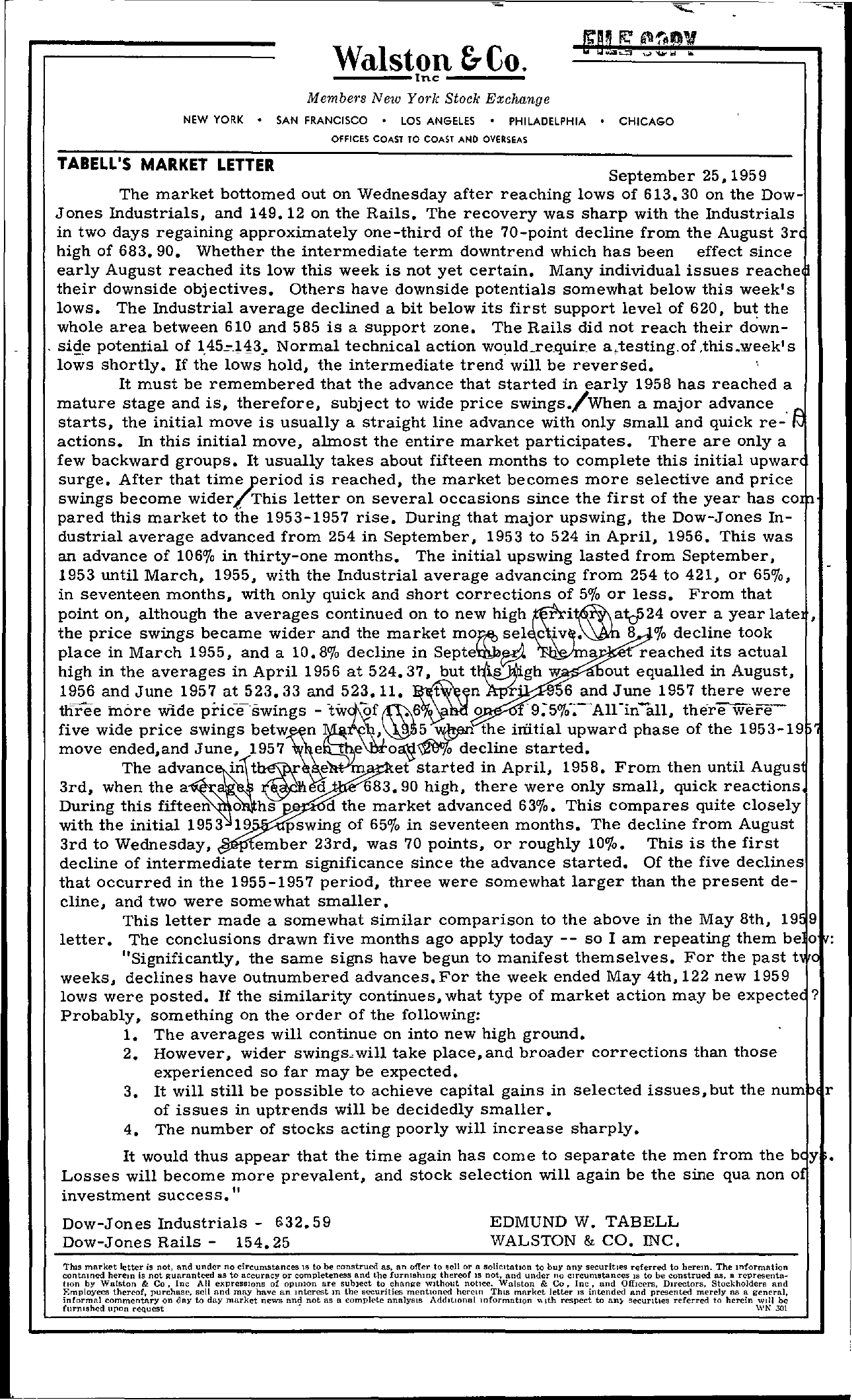 —-'- – .., Walston &Co. —–Inc —– Members New YO'k Stock Exchange NEW YORK SAN FRANCISCO LOS ANGELES PHILADELPHIA CHICAGO OFFICES COAST TO COAST AND OVERSEAS TABEll'S MARKET lETTER September 25,1959 The market bottomed out on Wednesday after reaching lows of 613.30 on the Dow- Jones Industrials, and 149.12 on the Rails. The recovery was sharp with the Industrials in two days regaining approximately one-third of the 70-point decline from the August 3r high of 683.90. Whether the intermediate term downtrend which has been effect since early August reached its low this week is not yet certain. Many individual issues reache their downside objectives. Others have downside potentials somewhat below this week's lows. The Industrial average declined a bit below its first support level of 620, but the whole area between 610 and 585 is a support zone. The Rails did not reach their down- . sig.e potential of 145.-.143. Normal technical action would.require a,testing.of ,this.week's lows shortly. If the lows hold, the intermediate trend will be reversed. It must be remembered that the advance that started in early 1958 has reached a mature stage and is, therefore, subject to wide price swings./When a major advance starts, the initial move is usually a straight line advance with only small and quick re- actions. In this initial move, almost the entire market participates. There are only a few backward groups. It usually takes about fifteen months to complete this initial upwar surge. After that timeyeriod is reached, the market becomes more selective and price swings become wider/This letter on several occasions since the first of the year has co pared this market to the 1953-1957 rise. During that major upswing, the Dow-Jones In- dustrial average advanced from 254 in September, 1953 to 524 in April, 1956. This was an advance of 1060/0 in thirty-one months. The initial upswing lasted from September, 1953 until March, 1955, with the Industrial average advancing from 254 to 421, or 650/0, in seventeen months, with only quick and short corrections of 50/0 or less. From that point on, although the averages continued on to new the price swings became wider and the market mOfiE! sel c iv over a year late, 8 decline took place in March 1955, and a 10.80/0 decline in a reached its actual high in the averages in April 1956 at 524.37, but w out equalled in August, 1956 and June 1957 at 523.33 and 523.11. kp'fj 6 and June 1957 there were Ulree more wIde pdc-e-'swings – therewere- five wide price swings the iriitial upward phase of the 1953-19 move ended,and June, 1957 e e decline started. The in e et started in April, 1958. From then until Augus 3rd, when the a Q 683.90 high, there were only small, quick reactions During this fifteen 0 hs Q the market advanced 630/0. This compares quite closely with the initial 1953 19 pswing of 650/0 in seventeen months. The decline from August 3rd to Wednesday, ember 23rd, was 70 points, or roughly 100/0. This is the first decline of intermediate term significance since the advance started. Of the five declines that occurred in the 1955-1957 period, three were somewhat larger than the present de- cline, and two were somewhat smaller. This letter made a somewhat similar comparison to the above in the May 8th, 19 letter. The conclusions drawn five months ago apply today — so I am repeating them be 0 Significantly, the same signs have begun to manifest themselves. For the past t weeks, declines have outnumbered advances. For the week ended May 4th,122 new 1959 lows were posted. If the similarity continues, what type of market action may be expecte Probably, something on the order of the following 1. The averages will continue on into new high ground. 2. However, wider swingswill take place, and broader corrections than those experienced so far may be expected. 3. It will still be possible to achieve capital gains in selected issues, but the num r of issues in uptrends will be decidedly smaller. 4. The number of stocks acting poorly will increase sharply. It would thus appear that the time again has come to separate the men from the b Losses will become more prevalent, and stock selection will again be the sine qua non 0 investment success. Dow-Jones Industrials – 632.59 Dow-Jones Rails – 154.25 EDMUND W. TABELL WALSTON & CO. INC. ThiS markct letter is not, and under no circumstances IS to be construed 85, an offer to sell or a soliCitation to buy any securities referred to herem The Informntion contmned herem Is not guarnntced as to accuracy or completeness and the furnishIng thereof IS not, and under no Circumstances IS to be construed as, a tlOn by Wnlston & Co, Inc All expressIons of oplDlOn are subJect to change WIthout notIce. Walston & Co, Inc, and Offlcers, DIrectors, Stockholders and Rmployecs thereof, purchllse, sell and may have Iln Interest 111 the securities mentlOned herein ThiS mnrkC't letter IS intended and presented merely as a general, informal commentnry on day to mllrket news Bnd not as a complete analYSIS AddltJonnl Information VI Jth respect to an) securitIes referred to herein wJlI be furnished upon r e q u e s t ' \\'N 301