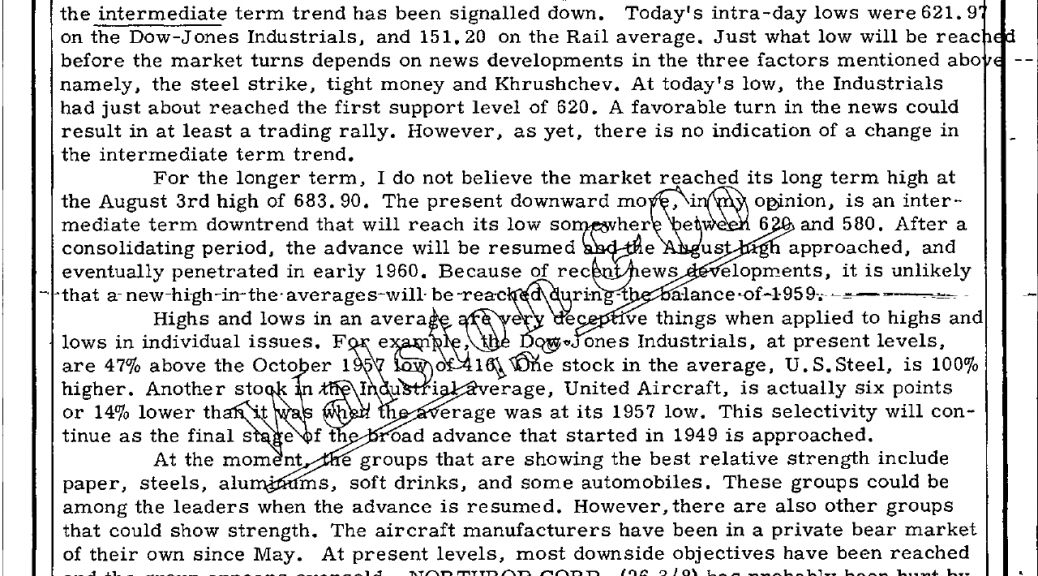 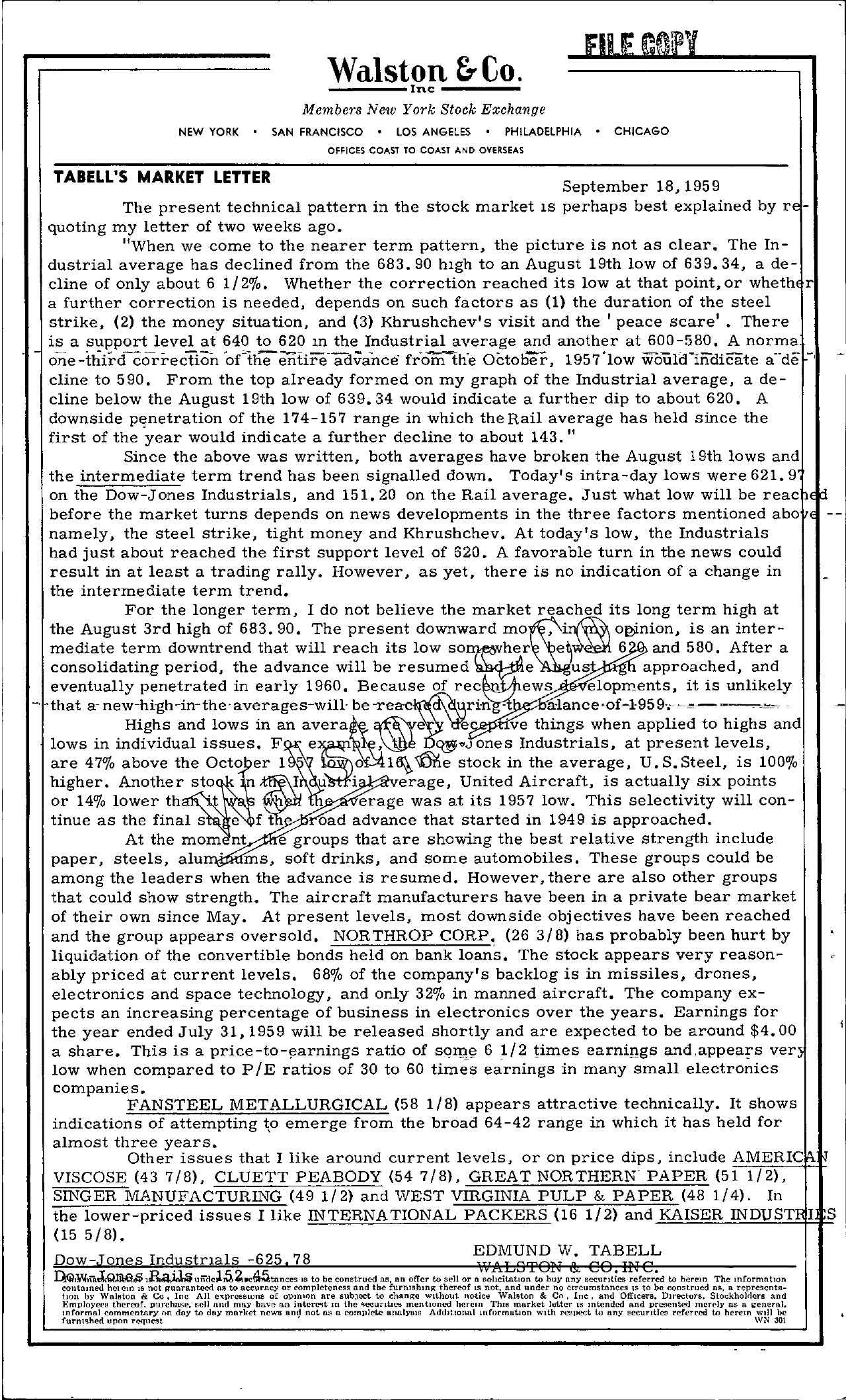 Walston &- Co. Members New York Stock Exchange NEW YORK SAN FRANCISCO LOS ANGELES PHILADELPHIA CHICAGO OffiCES COAST TO COAST AND OVERSEAS TABELL'S MARKET LETTER September 18,1959 The present technical pattern in the stock market is perhaps best explained by r – quoting my letter of two weeks ago. When we come to the nearer term pattern, the picture is not as clear. The In- dustrial average has declined from the 683.90 high to an August 19th low of 639.34, a de- cline of only about 6 1/2/0. Whether the correction reached its low at that pOint,or wheth r a further correction is needed, depends on such factors as (1) the duration of the steel strike, (2) the money situation, and (3) Khrushchev's visit and the' peace scare' There is a support level at 640 to 620 in the Industrial average and another at 600-580. A norma ofOtheentire advance- fr'Offith'e October, 1957'low woulnndicate ade – cline to 590. From the top already formed on my graph of the Industrial average, a de- cline below the August 19th low of 639.34 would indicate a further dip to about 620. A downside of the 174-157 range in which the Rail average has held since the first of the year would indicate a further decline to about 143. Since the above was written, both averages have broken the August 19th lows and the intermediate term trend has been signalled down. Today's intra-day lows were 621. 9 on the Dow-Jones Industrials, and 151.20 on the Rail average. Just what low will be reac before the market turns depends on news developments in the three factors mentioned abo namely, the steel strike, tight money and Khrushchev. At today's low, the Industrials had just about reached the first support level of 620. A favorable turn in the news could result in at least a trading rally. However, as yet, there is no indication of a change in the intermediate term trend. For the longer term, I do not believe the market reached its long term high at the August 3rd high of 683.90. The present downward oPJinion, is an inter- mediate term downtrend that will reach its low e 6 and 580. After a consolidating period, the advance will be resumed us approached, and eventually penetrated in early 1960. Because of elopments, it is unlikely that a- new-high – be a-lance of-195 9-, – – — Highs and lows in an e ve things when applied to highs and lows in individual issues. ones Industrials, at present levels, are 47/0 above the Octo er 1 0 'i6f\e stock in the average, U. S. Steel, is 1000/0 higher. Another sto n II i erage, United Aircraft, is actually six points or 14/0 lower th 't erage was at its 1957 low. This selectivity will con- tinue as the final s eft oad advance that started in 1949 is approached. At the mom nt e groups that are showing the best relative strength include paper, steels, alu ms, soft drinks, and some automobiles. These groups could be among the leaders when the advance is resumed. However, there are also other groups that could show strength. The aircraft manufacturers have been in a private bear market of their own since May. At present levels, most downside objectives have been reached and the group appears oversold. NORTHROP (263/8) has probably been hurt by liquidation of the convertible bonds held on bank loans. The stock appears very reason- ably priced at current levels. 68/0 of the company's backlog is in missiles, drones, electronics and space technology, and only 32/0 in manned aircraft. The company ex- pects an increasing percentage of business in electronics over the years. Earnings for the year ended July 31,1959 will be released shortly and are expected to be around 4.00 a share. This is a price-to-earnings ratio of sOIQe 6 1/2 times earnings and.appears ver low when compared to P / E ratios of 30 to 60 times earnings in many small electronics companies. FANSTEEL METALLURGICAL (58 1/8) appears attractive technically. It shows indications of attempting 1;0 emerge from the broad 64-42 range in which it has held for almost three years. Other issues that I like around current levels, or on price dips, include AMERIC VISCOSE (43 7/8), CLUETT PEABODY (54 7/8), GREAT NORTHERN PAPER (51 1/2), SINGER MANUFACTURING (49 1/2) and WEST VIRGINIA PULP & PAPER (48 1/4), In the lower-priced issues I like INTERNATIONAL PACKERS (16 1/2) and KAISER INDUST (155/8). Dow-Jones Industnals ultajJ..s 78 E'lDI-AMLUSN'f'DONWI.lt TCAO.BHEJLCL. IS to be construed as, an offer to sell or a sohcitntlOn to buy any securities referred to herem The mformnbon eontnmed hel em IS not guaranteed M to accuracy or I'ompleteness and the furnlshmg thereof IS not, and under no Circumstances IS to be construed liS, a representa- tion by Walston & Co. Inc All e(preSSllms of opmlon are subJcct to chanlte Without notice Wnlston & Co, Inc, and Officers. Dlrectors, Stockholders nnd Employees thereof, purchase, sell nnd may hnvc an intcrC'lt III the '1ecuTibes mentioned herem ThiS market letter IS mtended nnd presented mcr('ly as a general. mformal commentary on day to day market ne\l.5 and not as a complete analYSIS Additional mformatlon With respect to nny securities referred to herem Will be furm;hcd upon r e q u e s t ' WN Jot