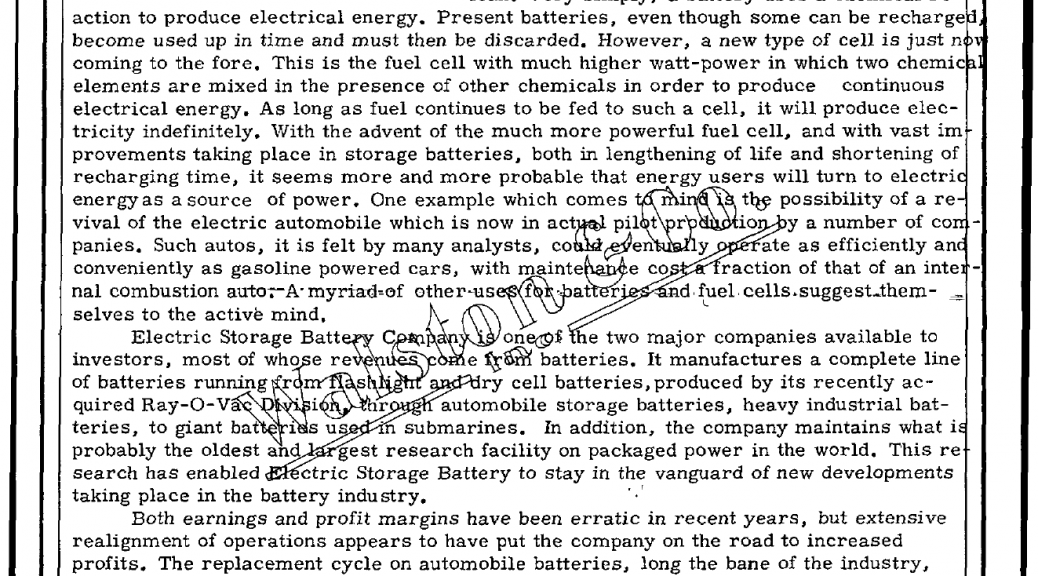 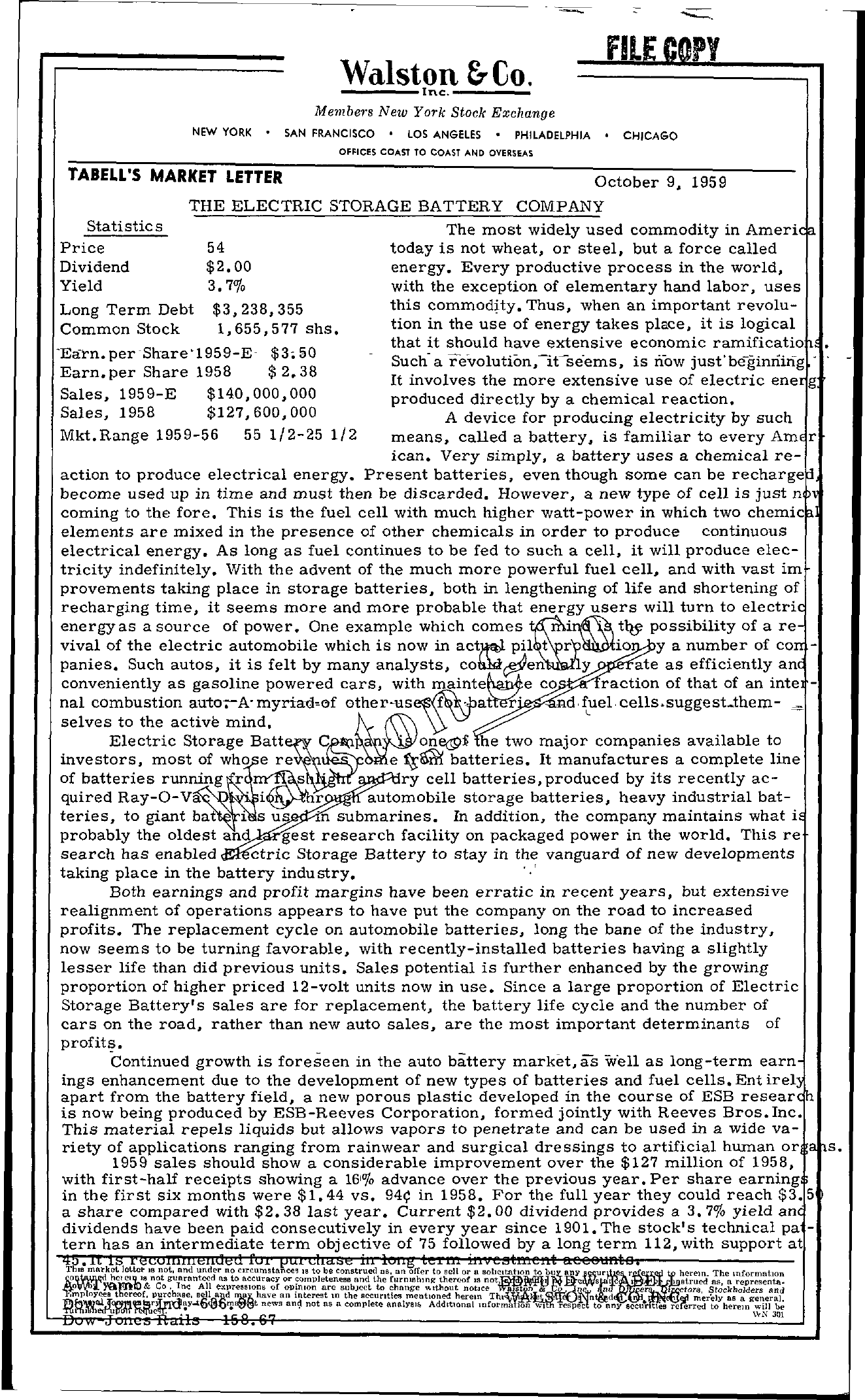 W—-a–l–s-tInocn.–&—-C-o. Fit Membe1's New York Stock Exchange NEW YORK SAN FRANCISCO LOS ANGELES PHILADELPHIA CHICAGO OFFICES COAST TO COAST AND OVERSEAS TABELL'S MARKET LETTER October 9, 1959 THE ELECTRIC STORAGE BATTERY COMPANY Statistics The most widely used commodity in Ameri Price 54 today is not wheat, or steel, but a force called Dividend 2.00 energy. Every productive process in the world, Yield 3. 70/0 with the exception of elementary hand labor, uses Long Term Debt 3,238,355 Common Stock 1,655,577 shs. -Earn. perShare1959-E' 3;!0 Earn. per Share 1958 2.38 Sales, 1959-E Sales, 1958 140,000,000 127,600,000 this commodity. Thus, when an important revolution in the use of energy takes place, it is logical that it should have extensive economic ramificatio Such- a revolution,-iCse'ems, is Ii-ow just'be-ginning It involves the more extensive use of electric ene g produced directly by a chemical reaction. A device for producing electricity by such Mkt.Range 1959-56 55 1/2-25 1/2 means, called a battery, is familiar to every Am r ican. Very simply, a battery uses a chemical re- action to produce electrical energy. Present batteries, even though some can be recharge become used up in time and must then be discarded. However, a new type of cell is just n coming to the fore. This is the fuel cell with much higher watt-power in which two chemic elements are mixed in the presence of other chemicals in order to produce continuous electrical energy. As long as fuel continues to be fed to such a cell, it will produce elec- tricity indefinitely. With the advent of the much more powerful fuel cell, and with vast im provements taking place in storage batteries, both in lengthening of life and shortening of recharging time, it seems more and more probable that energy users will turn to electri energy as a source of power. One example which comes possibility of a re vival of the electric automobile which is now in act pil t y a number of co – panies. Such autos, it is felt by many analysts, cofSci!en y ate as efficiently an conveniently as gasoline powered cars, with maintebnae co raction of that of an inte nal combustion nd,tuel,cells.suggestthem- selves to the active mind. Electric Storage Batt C V, ' he two major companies available to investors, most of who e e batteries. It manufactures a complete line of batteries running r ry cell batteries, produced by its recently ac- quired Ray-O- Va; automobile storage batteries, heavy industrial bat- teries, to giant bat i sus 'n submarines. In addition, the company maintains what i probably the oldest and gest research facility on packaged power in the world. This re search has enabled ctric Storage Battery to stay in the vanguard of new developments taking place in the battery indu stry. ' Both earnings and profit margins have been erratic in recent years, but extensive realignment of operations appears to have put the company on the road to increased profits. The replacement cycle on automobile batteries, long the bane of the industry, now seems to be turning favorable, with recently-installed batteries having a slightly lesser life than did previous units. Sales potential is further enhanced by the growing proportion of higher priced 12-volt units now in use. Since a large proportion of Electric Storage Battery's sales are for replacement, the battery life cycle and the number of cars on the road, rather than new auto sales, are the most important determinants of profits. Continued growth is foreseen in the auto battery market, as '\\'ell as long-term earn ings enhancement due to the development of new types of batteries and fuel cells. Ent irel apart from the battery field, a new porous plastic developed in the course of ESB resear is now being produced by ESB-Reeves Corporation, formed jointly with Reeves Bros. Inc. This material repels liquids but allows vapors to penetrate and can be used in a wide va- riety of applications ranging from rainwear and surgical dressings to artificial human or 1959 sales should show a considerable improvement over the 127 million of 1958, with first-half receipts showing a 1610/0 advance over the previous year. Per share earning in the first six months were 1. 44 vs. 94; in 1958. For the full year they could reach 3.5 a share compared with 2.38 last year. Current 2.00 dividend provides a 3.70/0 yield an dividends have been paid consecutively in every year since 1901. The stock's technical pa tern has an intermediate term objective of 75 followed by a long term 112, with support at 45.It is i'eCOlll1I1enc'led fa! PUI chase iII 1011g terlll ihucBtraeht aee8I1fl'l;s. ThlB mn)ket lotte) hC'Cl1LIS IBnontogt,uaanradnutenedderasnoto accuracy o\J\'l)j'YQmCO& Co. Inc All expressIOns of or coISmtpol opinion be construe eteness and are subJect d !lB, an offer to Bell or n to the to fcuhramngsehln\\gIththoeurtoonfoItSicneot,HMM.1SI)tti;WJi.I…iilT !Ab,mp!oyees thereof, purchnsc, Bell and a have an interest In the sccurlties mentIOned herem news an1 not as n complete annlYBlf, Additional mformMon w\ I 0 y CUfV;t! I oc n nd r C\!J.Ej to any SCCU,I les The Informabon as, a rellresenta. Stockholders and merely as a genera to herem will \\oN 301 s.