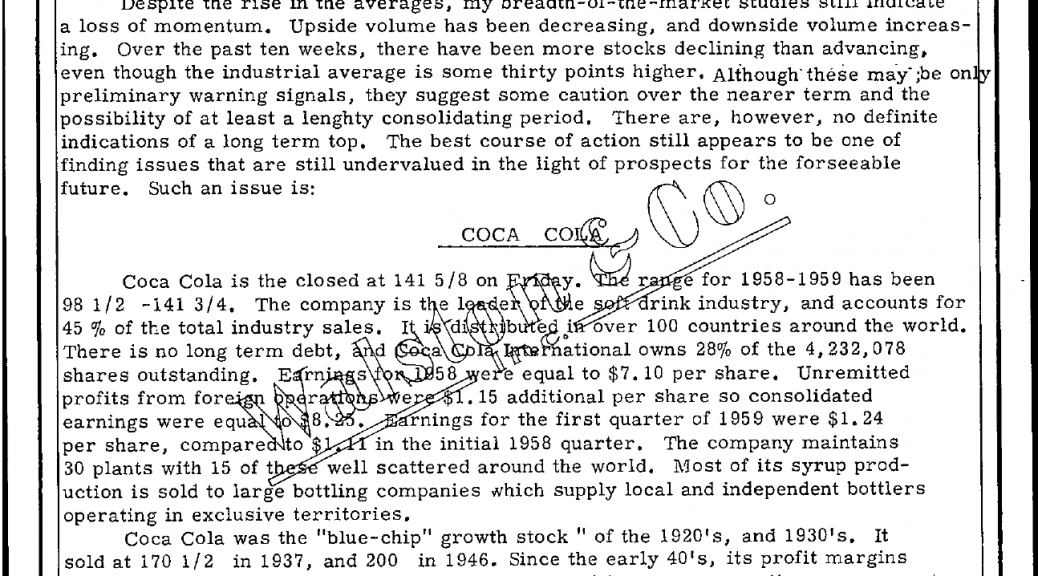 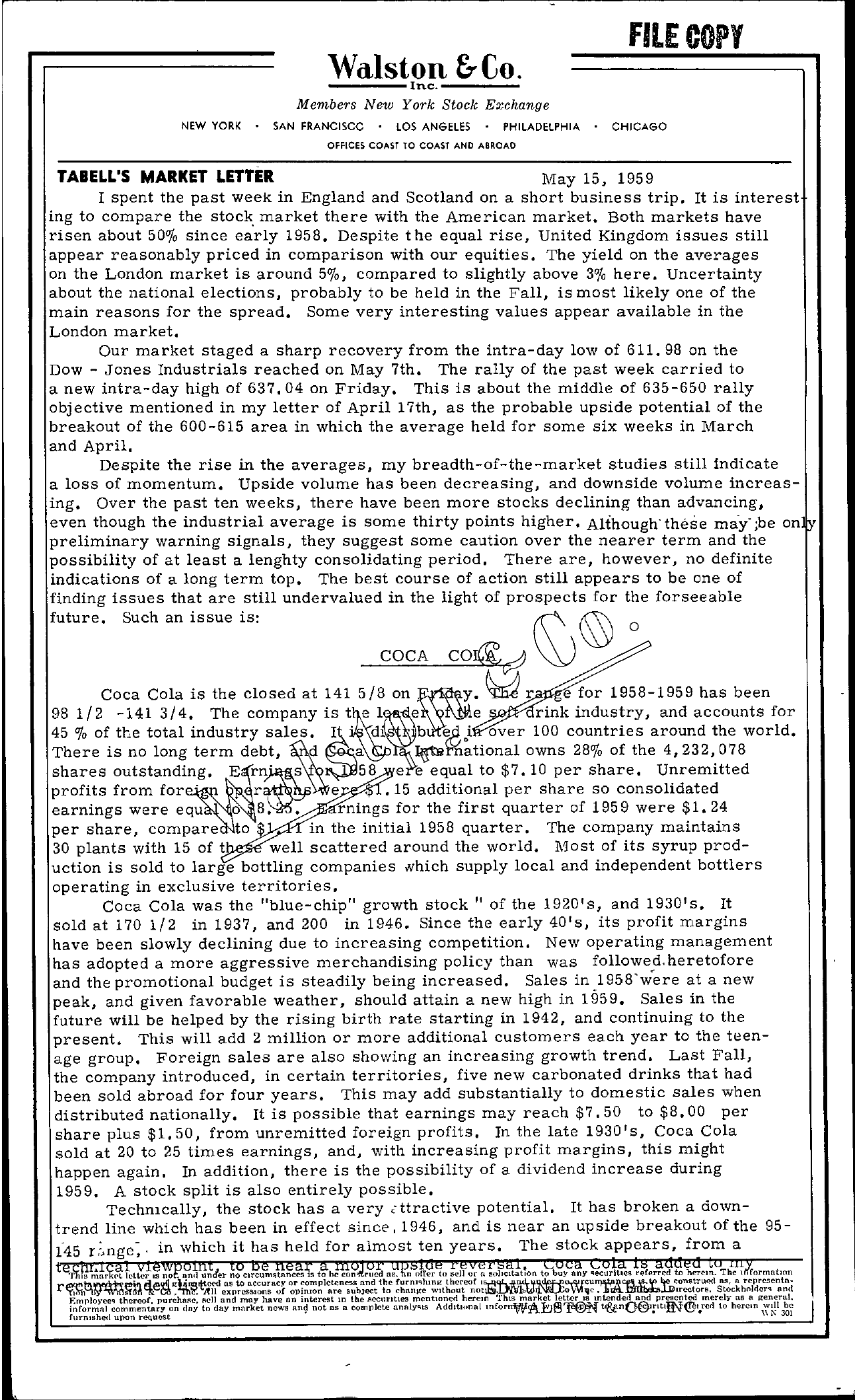 Walston &Co. In.c. Mernbers New York Stock Exchange FILE COpy NEW YORK SAN FRANCISCC LOS ANGELES PHILADELPHIA CHICAGO OFFICES COAST TO COAST AND ABROAD TABELL'S MARKET LETTER May 15, 1959 I spent the past week in England and Scotland on a short business trip. It is interest ing to compare the stock market there with the American market. Both markets have risen about 50 since early 1958. Despite the equal rise, United Kingdom issues still appear reasonably priced in comparison with our equities. The yield on the averages on the London market is around 5, compared to slightly above 3 here. Uncertainty about the national elections, probably to be held in the Fall, is most likely one of the main reasons for the spread. Some very interesting values appear available in the London market. Our market staged a sharp recovery from the intra-day low of 611.98 on the Dow – Jones Industrials reached on May 7th. The rally of the past week carried to a new intra-day high of 637.04 on Friday. This is about the middle of 635-650 rally objective mentioned in my letter of April 17th, as the probable upside potential of the breakout of the 600-615 area in which the average held for some six weeks in March and April. Despite the rise in the averages, my breadth-of-the-market studies still Indicate a loss of momentum. Upside volume has been decreasing, and downside volume increas- ing. Over the past ten weeks, there have been more stocks declining than advancing, even though the industrial average is some thirty points higher. Although'these may-;be on preliminary warning signals, they suggest some caution over the nearer term and the possibility of at least a lenghty consolidating period. There are, however, no definite indications of a long term top. The best course of action still appears to be one of finding issues that are still undervalued in the light of prospects for the forseeable 'future. Such an issue is (\ 0 COCA COIc1 Coca Cola is the closed at 141 5/8 r e for 1958-1959 has been 98 1/2 -141 3/4. The company is e rink industry, and accounts for 45 of the total industry sales. d b e)l.) over 100 countries around the world. There is no long term debt, a owns 28 of the 4,232,078 shares outstanding. E s 58 et'-e equal to 7.10 per share. Unremitted profits from for ' r e .15 additional per share so consolidated earnings were equ 8 . . rnings for the first quarter of 1959 were 1. 24 per share, compare to in the initial 1958 quarter. The company maintains 30 plants with 15 of t well scattered around the world. Most of its syrup prod- uction is sold to large bottling companies hich supply local and independent bottlers operating in exclusive territories. Coca Cola was the blue-chip growth stock of the 1920's, and 1930's. It sold at 170 1/2 in 1937, and 200 in 1946. Since the early 40's, its profit margins have been slowly declining due to increasing competition. New operating management has adopted a more aggressive merchandising policy than was followed, heretofore and the promotional budget is steadily being increased. Sales in 1958w'ere at a new peak, and given favorable weather, should attain a new high in 1959. Sales in the future will be helped by the rising birth rate starting in 1942, and continuing to the present. This will add 2 million or more additional customers each year to the teen- age group. Foreign sales are also showing an increaSing growth trend. Last Fall, the company introduced, in certain territories, five new carbonated drinks that had been sold abroad for four years. This may add substantially to domestic sales when distributed nationally. It is possible that earnings may reach 7.50 to 8.00 per share plus 1.50, from unremitted foreign profits. In the late 1930's, Coca Cola sold at 20 to 25 times earnings, and, with increaSing profit margins, this might happen again. In addition, there is the possibility of a dividend increase during 1959. A stock split is also entirely possible. Techmcally, the stock has a very ,-ttractive potential. It has broken a down- trend line which has been in effect since, 1946, and is near an upside breakout of the 95- 1'45 in which it has held for almost ten years. The stock appears, from a t T IS ('t lettenr eISQnilo ,Ilnd ,T'rtr. unJer no Circumstances IS to he con nlcd as, n o!1'er to sell or a solleltattan to buy any as to accuracy or completeness and the furnl;hmv thereof 1111 expreSSIOns of opimon are subJect to challICe WIthout notcJ…7i'U'hlthi'LCoVVl'Qc referred to herem. The 1 formnbon '-.h'dd…ll'JUId5J..lichornescttrourse,d as, n representnStockholder'! aod thereof, purchafle. lIell and may have no interest m the IICCllrltles mentIOned herem ThIS market letter IS mtcnd-erl and presented merely aB a general. informnl commentary on dllY to day mllrkct news Rn1 not as a complete nonly;ts Addltwnal 'F)Nt&nO)1!ltlml/cri 10 hereIn wI!1 be f\lrnlShed upon request \' 301