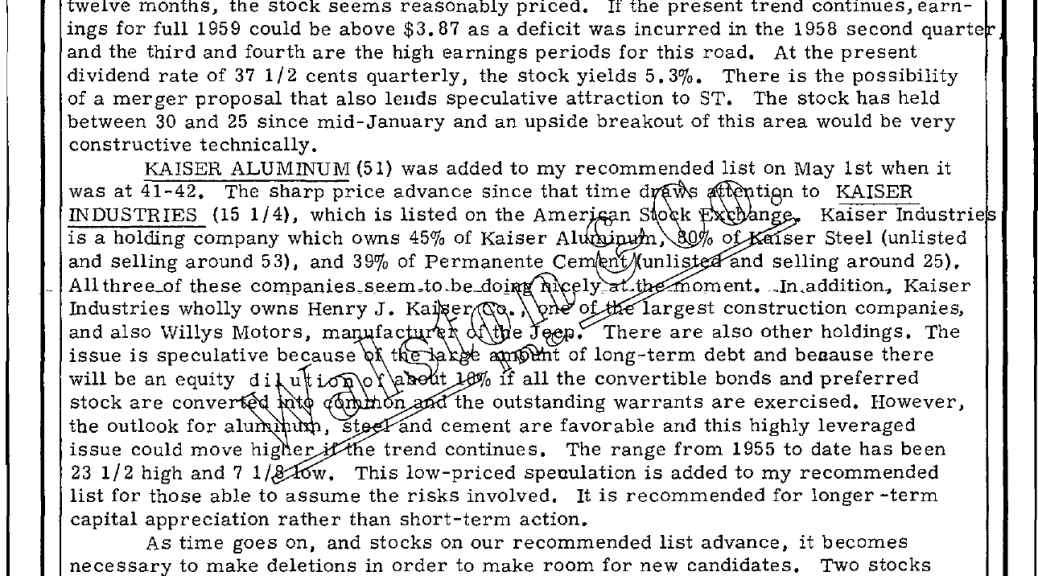 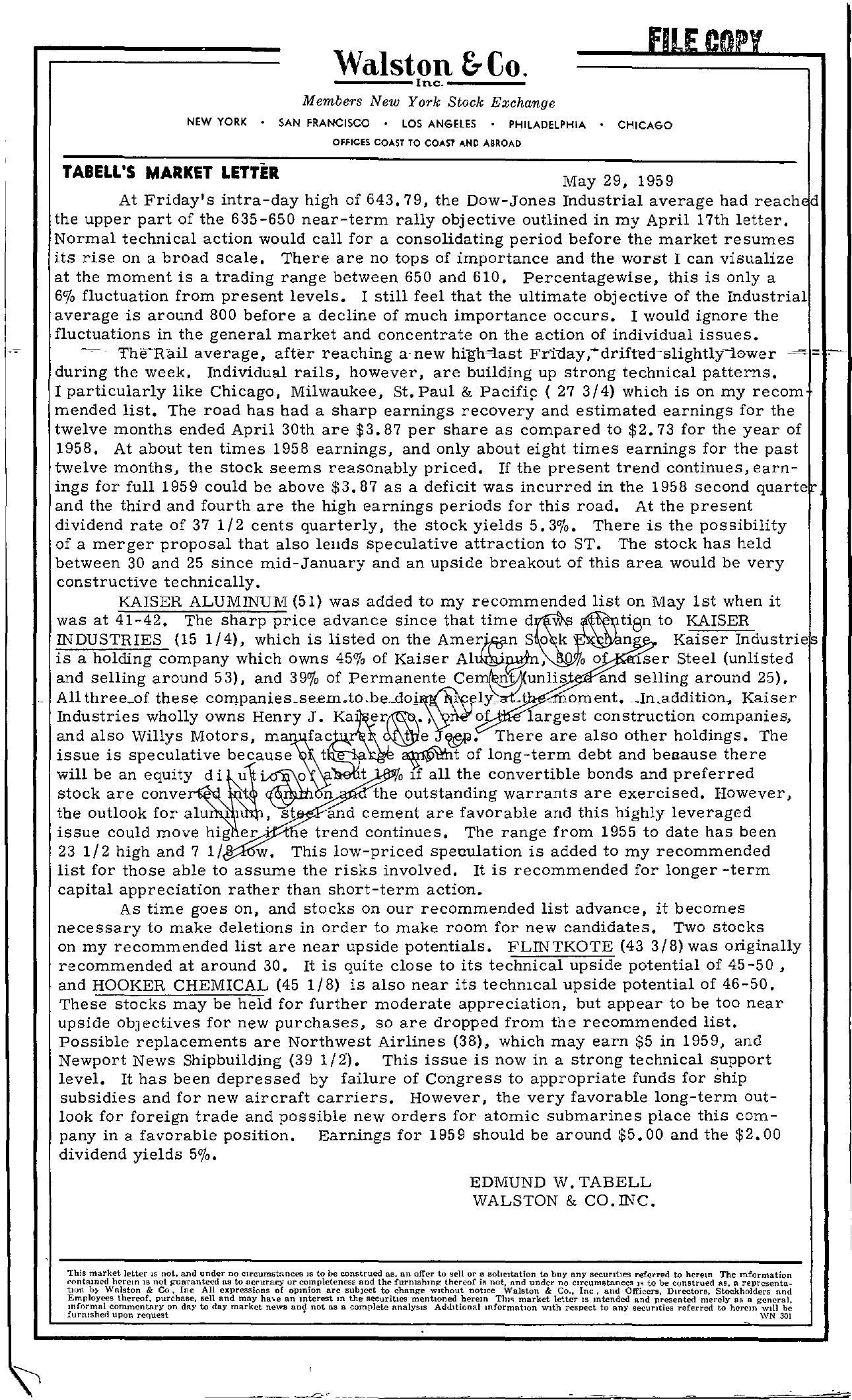 Walston &Co. —–Inc —– Members New York Stock Exchange NEW YORK SAN FRANCISCO LOS ANGELES PHILADELPHIA CHICAGO OFfICES COAST TO COAST AND ABROAD TABELL'S MARKET LETTER lVIay 29, 1959 At Friday's intra-day high of 643.79, the Dow-Jones Industrial average had reach d the upper part of the 635-650 near-term rally objective outlined in my April 17th letter. Normal technical action would call for a consolidating period before the market resumes its rise on a broad scale. There are no tops of importance and the worst I can visualize at the moment is a trading range between 650 and 610. Percentagewise, this is only a 60/0 fluctuation from present levels. I still feel that the ultimate objective of the Industrial average is around 800 before a decline of much importance occurs. I would ignore the fluctuations in the general market and concentrate on the action of individual issues. The-Rail average, after reaching a-new hi-ghlast Friday,-drifte-d-slightly-lower —- during the week. Individual rails, however, are building up strong technical patterns. I particularly like Chicago, lVIilwaukee, St. Paul & Pacifi9 (273/4) which is on my recom mended list. The road has had a sharp earnings recovery and estimated earnings for the twelve months ended April 30th are 3.87 per share as compared to 2.73 for the year of 1958. At about ten times 1958 earnings, and only about eight times earnings for the past twelve months, the stock seems reasonably priced. If the present trend continues, earn- ings for full 1959 could be above 3.87 as a deficit was incurred in the 1958 second quarte and the third and fourth are the high earnings periods for this road. At the present dividend rate of 37 1/2 cents quarterly, the stock yields 5.30/0. There is the possibility of a merger proposal that also lellds speculative attraction to ST. The stock has held between 30 and 25 since mid-January and an upside breakout of this area would be very constructive technically. KAISER ALUlVIINUlVI (51) was added to my recommended list on lVIay 1st when it was at 41-42. The sharp price advance since that time to KAISER INDUSTRIES (15 1/4), which is listed on the AmerjM-n S 0 k n Kaiser Industrie is a holding company which owns 450/0 of Kaiser and selling around 53), and 390/0 of Permanente 0 0 0 Iser Steel (unlisted and selling around 25). All threeof these oment. Inaddition. Kaiser Industries wholly owns Henry J. 0 largest construction companies, and also Willys lVIotors, issue is speculative because t OWe There are also other holdings. The of long-term debt and beuause there will be an stock are conve u t 0 If all the convertible bonds and preferred n the outstanding warrants are exercised. However, the outlook for alu 1 , st and cement are favorable and this highly leveraged issue could move hig er . e trend continues. The range from 1955 to date has been 23 1/2 high and 7 1/ This low-priced speculation is added to my recommended list for those able to assume the risks involved. It is recommended for longer -term capital appreciation rather than short-term action. As time goes on, and stocks on our recommended list advance, it becomes necessary to make deletions in order to make room for new candidates. Two stocks on my recommended list are near upside potentials. FLINTKOTE (43 3/8) was originally recommended at around 30. It is quite close to its technical upside potential of 45-50 , and HOOKER CHElVIICAL (45 1/8) is also near its techmcal upside potential of 46-50. These stocks may be held for further moderate appreciation, but appear to be too near upside obJ ectives for new purchases, so are dropped from the recommended list. Possible replacements are Northwest Airlines (38), which may earn 5 in 1959, and Newport News Shipbuilding (39 1/2). This issue is now in a strong technical support level. It has been depressed by failure of Congress to appropriate funds for ship subsidies and for new aircraft carriers. However, the very favorable long-term out- look for foreign trade and possible new orders for atomic submarines place this com- pany in a favorable position. Earnings for 1959 should be around 5.00 and the 2.00 dividend yields 50/0. EDlVIUND W. TABELL WALSTON & CO. INC. This market letter IS not. and under no cIrcumstances IS to be construed as, an offer to sell or n soliCItation to buy any SecUrttles referred to herem The mformntion ('ontalned herem 18 not guaranteed IlS to nc('uracy tion b;. Wnlston & Co, Inc All expressions of ur completeness and the opmion arc subJcct to furmshmg thereof iR not, nnd under change Without notice Walston & no Circumstances to be construed as n representaCo., Inc, and Officers, Directors, SU;ckholde;s nnd EmploYl!eS thereof, purchase, mformal commentary on day tsoeldl aliyndmmarakyethlnlewe sana Interest In nd not as a the securities mentioned herem market letter IS mtended complete nnalYSls Additional Informntlon With respect to any and presented ml'rely as a general, securities referred to herem Will be furnisher! upon r e q u e s t ' \\'N JOI