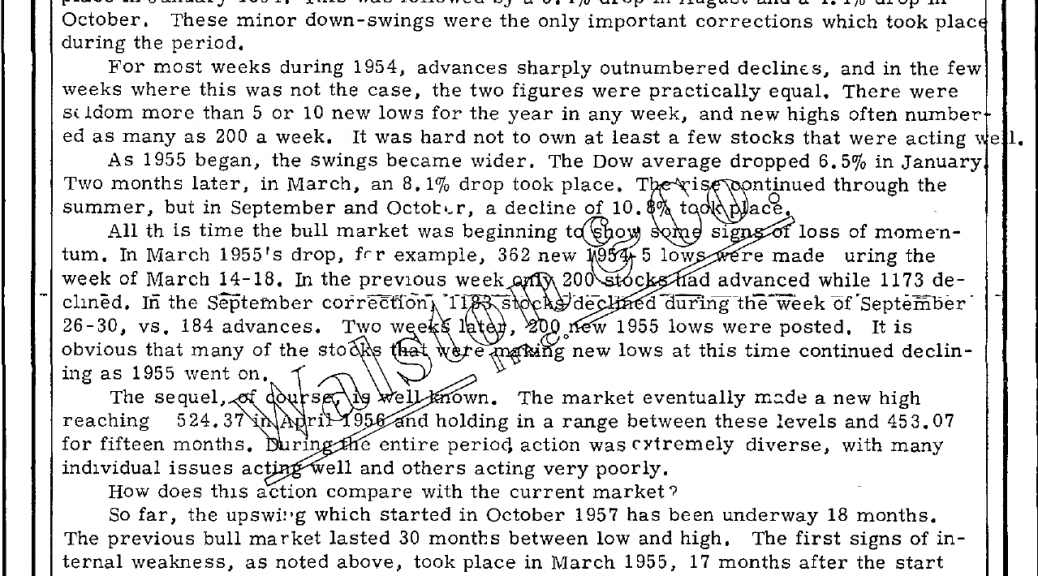 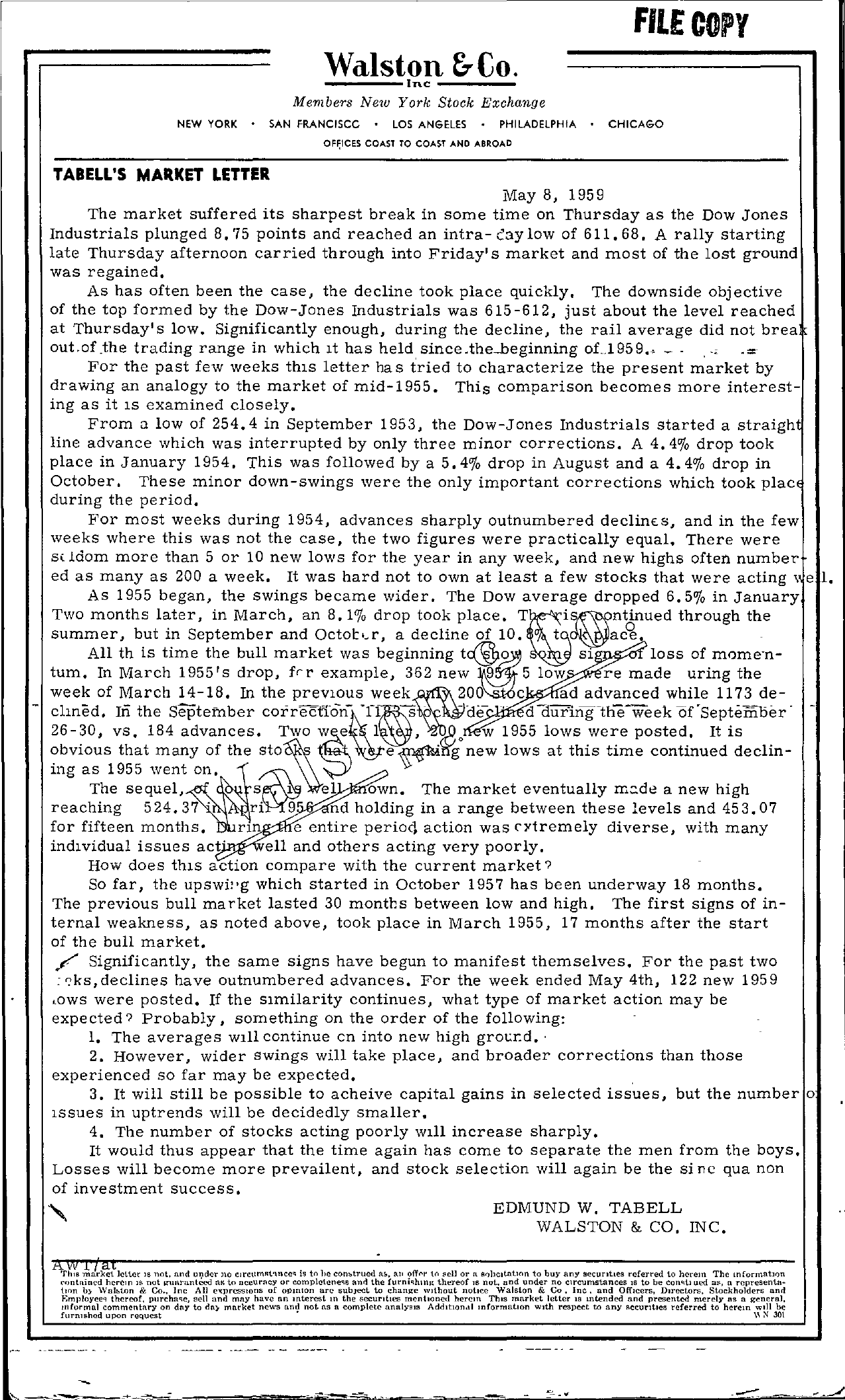 FfLECOPY NEW YORK Walston &Co. Inc Members New York Stock Exchanae SAN FRANCISCC – LOS ANGELES PHILADELPHIA COAST TO COAST AND ABROAD CHICAGO TABEll'S MARKET LETTER May 8, 1959 The market suffered its sharpest break in some time on Thursday as the Dow Jones Industrials plunged 8.75 points and reached an intra- cay low of 611.68. A rally starting late Thursday afternoon carried through into Friday's market and most of the lost ground was regained. As has often been the case, the decline took place quickly. The downside obj ective of the top formed by the Dow-Jones Industrials was 615-612, just about the level reached at Thursday's low. Significantly enough, during the decline, the rail average did not brea ouLof.the trading range in which It has held since.thebeginning oLI959., . .- For the past few weeks thIS letter ha s tried to characterize the present market by drawing an analogy to the market of mid-1955. This comparison becomes more interesting as it IS examined closely. From ;1 low of 254.4 in September 1953, the Dow-Jones Industrials started a straigh line advance which was interrupted by only three minor corrections. A 4.40/0 drop took place in January 1954. This was followed by a 5.40/0 drop in August and a 4.40/0 drop in October. These minor down-swings were the only important corrections which took placE during the period. For most weeks during 1954, advances sharply outnumbered declins, and in the few weeks where this was not the case, the two figures were practically equal. There were S( idom more than 5 or 10 new lows for the year in any week, and new highs often number ed as many as 200 a week. It was hard not to own at least a few stocks that were acting \ e 1 As 1955 began, the swings became wider. The Dow average dropped 6.50/0 in January Two months later, in March, an 8.10/0 drop took place. through the summer, but in September and Octob.r, a decline of 10. t . All th is time the bull market was beginning sir,ndloSS of mome'n- tum. In March 1955' s drop, fr r example, 362 new 9 5 low re made uring the week of March 14-18. In the prevlOus – clmed. Iii the September 26-30, vs. 184 advances. Two obvious that many of the , c ad advanced while 1173 de-de– dauring-thE(weekofSeptemoerQ.O w 1955 lows were posted. It is new lows at this time continued declin- – ing as 1955 The sequel, s I el own. The market eventually mde a new high reaching 524.37 – ri 9 nd holding in a range between these levels and 453.07 for fifteen months. nn e entire perioq action was (,ytremely diverse, with many indIvidual issues ell and others acting very poorly. How does thIS action compare with the current market So far, the upswi!'g which started in October 1957 has been underway 18 months. The previous bull market lasted 30 months between low and high. The first signs of in- ternal weakness, as noted above, took place in March 1955, 17 months after the start .rof the bull market Significantly, the same signs have begun to manifest themselves. For the past two nks, declines have outnumbered advances. For the week ended May 4th, 122 new 1959 ,ows were posted. If the SImilarity continues, what type of market action may be expected Probably, something on the order of the following 1. The averages WIll continue cn into new high grOl.rd. ' 2. However, wide r swings will take place, and broader corrections than those experienced so far may be expected. 3. It will still be possible to acheive capital gains in selected issues, but the number 0 Issues in uptrends will be decidedly smaller. 4. The number of stocks acting poorly wIll increase sharply. It would thus appear that the time again has come to separate the men from the boys. Losses will become more prevailent, and stock selection will again be the si nc qua non of investment success. EDMUND W. TABELL WALSTON & CO. INC. AW rial TIllS market letter IS not, Ilnd under no ClrCtlmRt/lncc; is to he com,trucd all offi'r to ell or Il !Ihcltntmn to buy any seCUrities referred to herem The mformnt()11 ('I)ntllincd here1n1'\ not I.rtlllrantero lUI to Ilccurncy or complctct1els snli the furnihlll). thereof IS not, nnd under no cIrcumstances 1S to be COn'ltl ued a!', a rcpresentll hnn b \Vnbton & Co., Inc All (''lprCslOns of OPinton arc subject to change WIthout nollce Walston & Co, Inc, and OffIcers, Directors, Stockholders nnd thereof, plIrchn;e, sell and may have an mterest m the securIties mentioned herem ThiS market letter IS Intended nnd presented merely as n general, wf()rmal commentary on dny to dn) mnrket news and not ns a complete anah-sls Addltlon..!1 mformatlon WIth resPect to any flCCUl'ltles referred to herem WIll be furnished upon r e q u e s t ' \\.N 301 –'