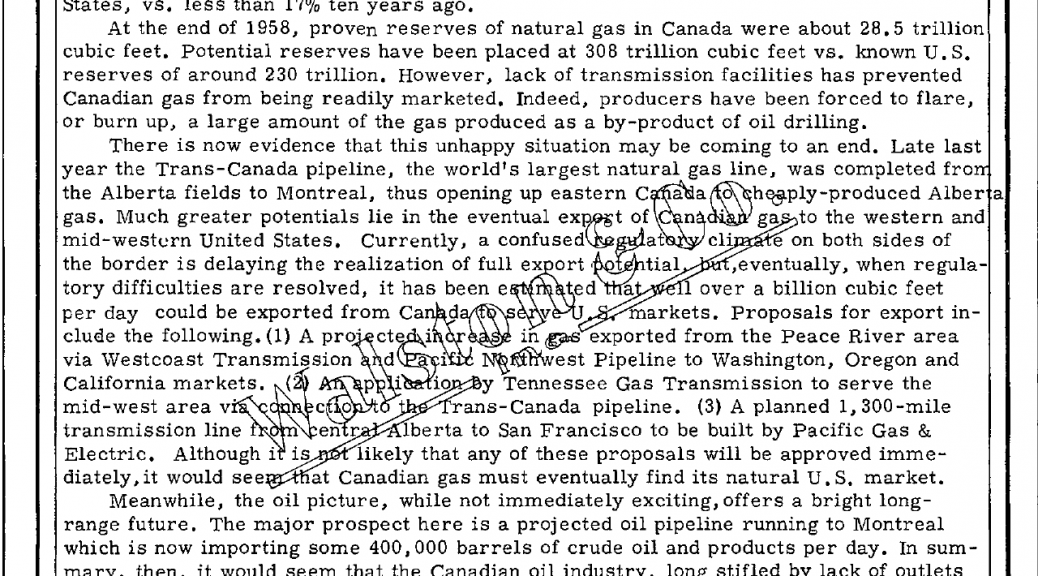 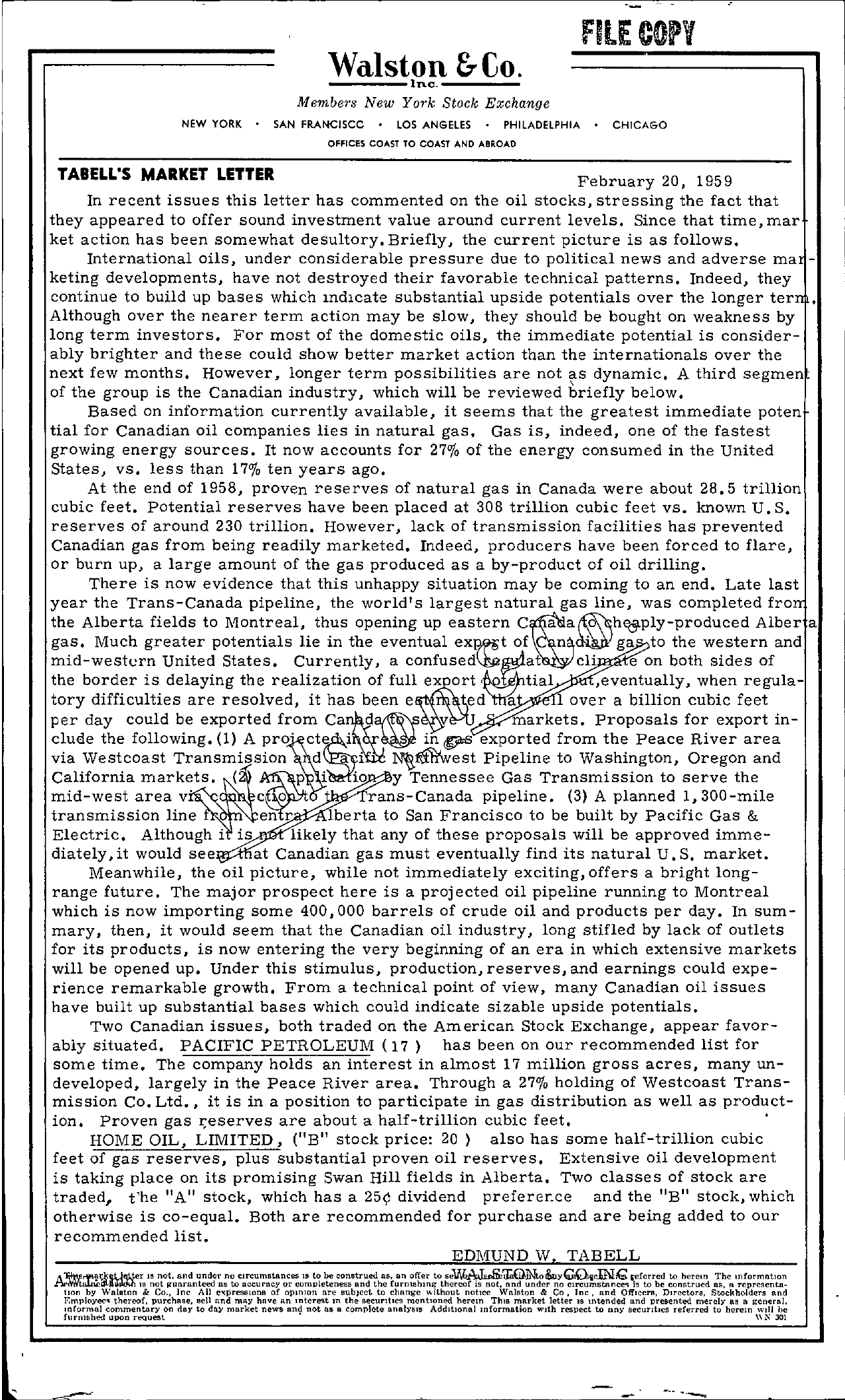 W—a-l-sItnocn.-&-C–o-. Members New York Stock Exchange fiLE COPY NEW YORK SAN FRANCISCC LOS ANGELES PHILADELPHIA CHICAGO OFFICES COAST TO COAST AND ABROAD TABELL'S MARKET LETTER February 20, 1959 In recent issues this letter has commented on the oil stocks, stressing the fact that they appeared to offer sound investment value around current levels. Since that time, mar ket action has been somewhat desultory. Briefly, the current picture is as follows. International oils, under considerable pressure due to political news and adverse ma – keting developments, have not destroyed their favorable technical patterns. Indeed, they continue to build up bases which mdlcate substantial upside potentials over the longer ter Although over the nearer term action may be slow, they should be bought on weakness by long term investors. For most of the domestic oils, the immediate potential is consider- ably brighter and these could show better market action than the internationals over the next few months. However, longer term possibilities are not a, s dynamic. A third segmen of the group is the Canadian industry, which will be reviewed briefly below. Based on information currently available, it seems that the greatest immediate poten tial for Canadian oil companies lies in natural gas. Gas is, indeed, one of the fastest growing energy sources. It now accounts for 27 of the energy consumed in the United States, vs. less than 17 ten years ago. At the end of 1958, proven reserves of natural gas in Canada were about 28.5 trillion cubic feet. potential reserves have been placed at 308 trillion cubic feet vs. known U. S. reserves of around 230 trillion. However, lack of transmission facilities has prevented Canadian gas from being readily marketed. Indeed, producers have been forced to flare, or burn up, a large amount of the gas produced as a by-product of oil drilling. There is now evidence that this unhappy situation may be coming to an end. Late last year the Trans-Canada pipeline, the world's largest natural gas line, was completed fro the Alberta fields to Montreal, thus opening up eastern Alber a gas. Much greater potentials lie in the eventual of n ga to the western and mid-western United States. Currently, a eli e on both sides of the border is delaying the realization of ort ,eventually, when regula- tory difficulties are resolved, it has been e ed'ttrat over a billion cubic feet per day could be exported from clude the following. (1) A prOcit'eS' via Westcoast Transmission d 1 i !California ( i io w markets. Proposals for export inin exported from the Peace River area Pipeline to Washington, Oregon and y Tennessee Gas Transmission to serve the mid-west area v' c0 rans-Canada pipeline. (3) A planned 1,300-mile transmission line en r lberta to San Francisco to be built by Pacific Gas & Electric. Although i is likely that any of these proposals will be approved imme- diately, it would see at Canadian gas must eventually find its natural U. S. market. Meanwhile, the oil picture, while not immediately exciting, offers a bright long- range future. The major prospect here is a projected oil pipeline running to Montreal which is now importing some 400,000 barrels of crude oil and products per day. In sum- mary, then, it would seem that the Canadian oil industry, long stifled by lack of outlets for its products, is now entering the very beginning of an era in which extensive markets will be opened up. Under this stimulus, production, reserves, and earnings could expe- rience remarkable growth. From a technical point of view, many Canadian oil issues have built up substantial bases which could indicate sizable upside potentials. Two Canadian issues, both traded on the American Stock Exchange, appear favor- ably situated. PACIFIC PETROLEUM (17) has been on our recommended list for some time. The company holds an interest in almost 17 million gross acres, many un- developed, largely in the Peace River area. Through a 27 holding of Westcoast Trans- mission Co. Ltd., it is in a position to participate in gas distribution as well as product- ion, Proven gas r;eserves are about a half-trillion cubic feet. . HOME OIL, LIMITED, (B stock price 20) also has some half-trillion cubic feet of gas reserves, plus substantial proven oil reserves. Extensive oil development is taking place on its promising Swan Hill fields in Alberta. Two classes of stock are traded, t'he A stock, which has a dividend prefererce and the B stock, which otherwise is co-equal. Both are recommended for purchase and are being added to our recommended list. EDMUND W. TABELL ,,'lihtllr'l!lrj(e1Jl'I1.ter IS not, and under no cIrcumstances IS to be construed as, an offer to ,eferred to herem The mformatlOn l1rMVtaUV!aLJlilkkh IS not Itunrnntced as to accuracy or completeness nnd the furnlshmg thereof is not. and under no cU'cumst/lncco; is to be construed as, a representa- tIOn by Wnlston & Co., Inc All c'lpreSSlOns of opmlOn are subJect to change '.I.ithout notJce Walston & Co, Inc. and Officers, Stockholders and thereof, purchase, selland may have an mterest III the seeuntJes mentlOncd herem ThIS market letter IS llltended and presented merely as a genera, mrormal commentary on day to day market news and not as a complete analYSIS Additional mformation With respect to nny securities referred to herem Will be furmshcd upon r e q u e s t ' \\ N 301