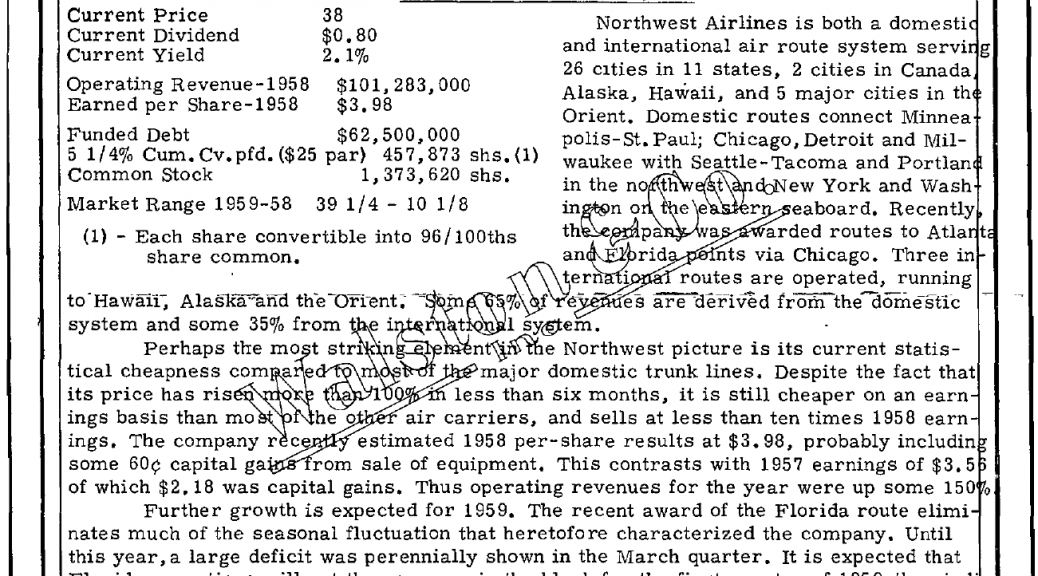 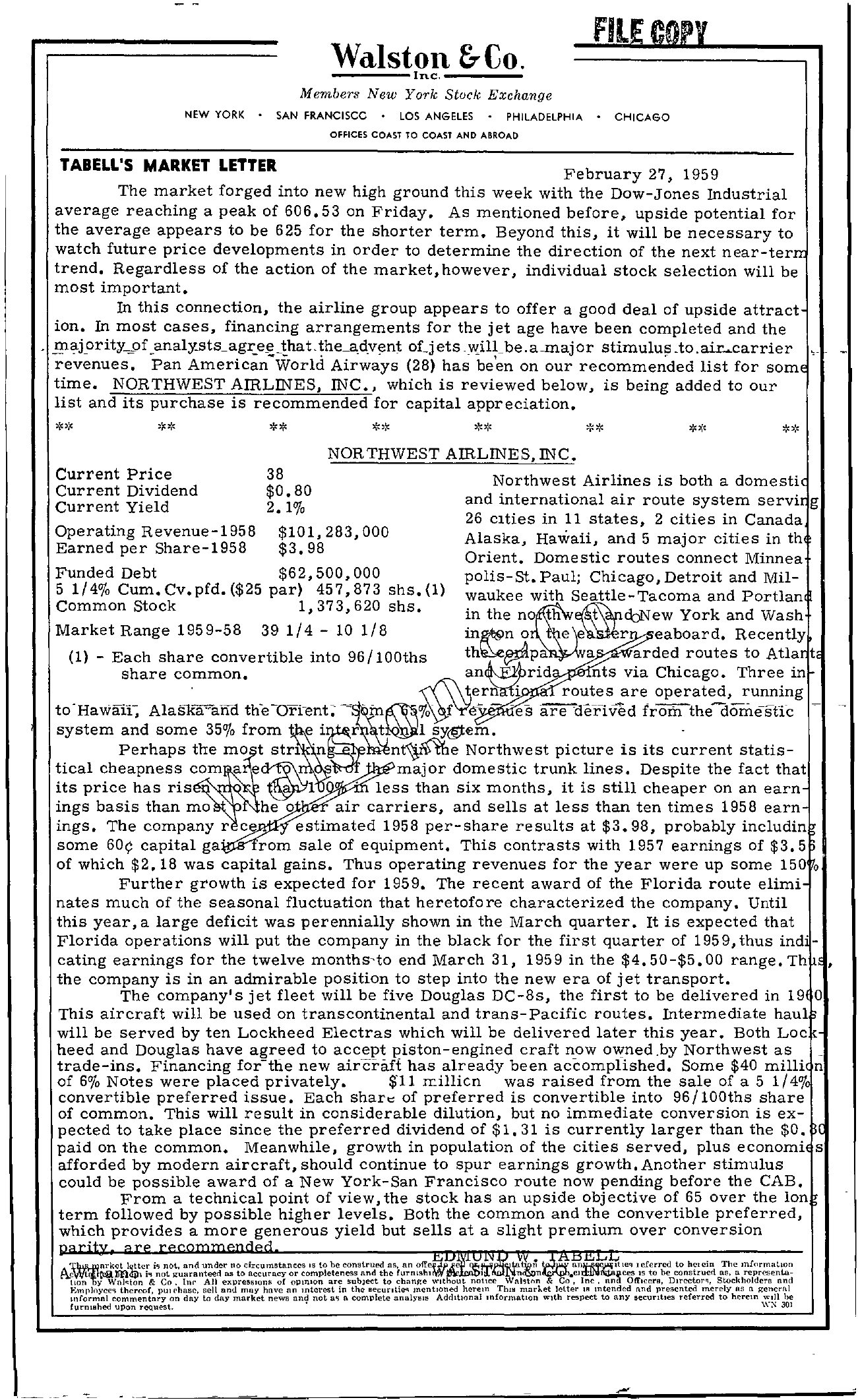 Walston &Co. —–lnc. —– Members New York Stuck Exchange fit NEW YORK SAN FRANCISCO LOS ANGELES PHILADELPHIA CHICAGO OFFICES COAST TO COAST AND ABROAD TABELL'S MARKET LETTER February 27, 1959 The market forged into new high ground this week with the Dow-Jones Industrial average reaching a peak of 606.53 on Friday. As mentioned before, upside potential for the average appears to be 625 for the shorter term. Beyond this, it will be necessary to watch future price developments in order to determine the direction of the next near-ter trend. Regardless of the action of the market, however, individual stock selection will be most important. In this connection, the airline group appears to offer a good deal of upside attract ion. In most cases, financing arrangements for the jet age have been completed and the majorityof .. t. thea,d.vent oLj ets. a-maj or stimului3 .to .aircarriel' revenues. Pan American World Airways (28) has been on our recommended list for som time. NORTHWEST AIRLmES, mc., which is reviewed below, is being added to our list and its purchase is recommended for capital appreciation. NORTHWEST AIRLmES,mC. Current Price CCuurrrreenntt YDiievliddend 38 2.01.80 Northwest Airlines is both a domesti and international air route system servi g OEaprenreatdinpgerReSvheanrue-e1-1995588 310 918,283,000 26 cIties in 11 states, 2 cities in Canada Alaska, Hawaii, and 5 major cities in th Orient. Domestic routes connect Minnea Funded Debt 62,500,000 pOlis-St. Paul; Chicago,Detroit and Mil- 51/4 Cum.Cv.pfd.(25 par) 457,873 shs.(l) waukee with Seattle-Tacoma and Portlan Common Stock 1,373,620 shs. in the York and Wash Market Range 1959-58 39 1/4 – 10 1/8 0e eaboard. Recently (1) – Each share convertible into 96/100ths share common. a arded routes to Atla t nts via Chicago. Three in routes are operated, running -es are 'aerived from. thedomestic Perhaps mo t strl'n Northwest picture is its current statis- tical cheapness com a major domestic trunk lines. Despite the fact that its price has ris less than six months, it is still cheaper on an earn ings basis than mo he 0 air carriers, and sells at less than ten times 1958 earn ings. The company l' ce estimated 1958 per-share results at 3.98, probably includin some 60 capital gaO rom sale of equipment. This contrasts with 1957 earnings of 3.5 of which 2.18 was capital gains. Thus operating revenues for the year were up some 150 0 Further growth is expected for 1959. The recent award of the Florida route elimi nates much of the seasonal fluctuation that heretofo re characterized the company. Until this year, a large deficit was perennially shown in the March quarter. It is expected that Florida operations will put the company in the black for the first quarter of 1959, thus ind'- cating earnings for the twelve months,to end March 31, 1959 in the 4.50-5.00 range.Th , the company is in an admirable position to step into the new era of jet transport. The company's jet fleet will be five Douglas DC-8s, the first to be delivered in 19 0 This aircraft will be used on transcontinental and trans-Pacific routes. Intermediate haul will be served by ten Lockheed Electras which will be delivered later this year. Both Loc heed and Douglas have agreed to accept piston-engined craft now owned .by Northwest as trade-ins. Financing for-the new aircraft has already been accomplished. Some 40 milli n of 6 Notes were placed privately. 1 rrillicn was raised from the sale of a 5 1/40/. convertible preferred issue. Each shar of preferred is convertible into 96/100ths share of common. This will result in considerable dilution, but no immediate conversion is ex- pected to take place since the preferred dividend of 1.31 is currently larger than the 0. paid on the common. Meanwhile, growth in population of the cities served, plus economi s afforded by modern aircraft, should continue to spur earnings growth. Another stimulus could be possible award of a New York-San Francisco route now pending before the CAB. From a technical point of view, the stock has an upside obj ective of 65 over the Ion term followed by possible higher levels. Both the common and the convertible preferred, whih provides a more generous yield but sells at a slight premium over conversion A.c t m1Iq!tcr not, and under no circumstances IS to be construed llS, an off i'l not guaranteed as to nccurncy or completeness and the furnlshl M il.l leferrcd to hClein The mformatlOn CCS IS to be construed as, u represent.n- lion y Wnloton & Co. hll' All expreSSlonll of OplTIlOn arc subject to chunge WIthout. notice & Co, 1nc, OfTlcers, Stockholders and thereof, pU1('hase. sell nnd may have nn mterest in the secuntie'1 mentIOned herem ThIS market letter lR Illtended nnd presented mcrely fLS a gcneral mformnl commentary on day to dny market neWS and not a'l n complete analYSIS AdrhtlOnal mformatton WIth respect to any securitIes referred to herem WIll be furTIlshed upon r e q u e s t , ' \\';\ 30l