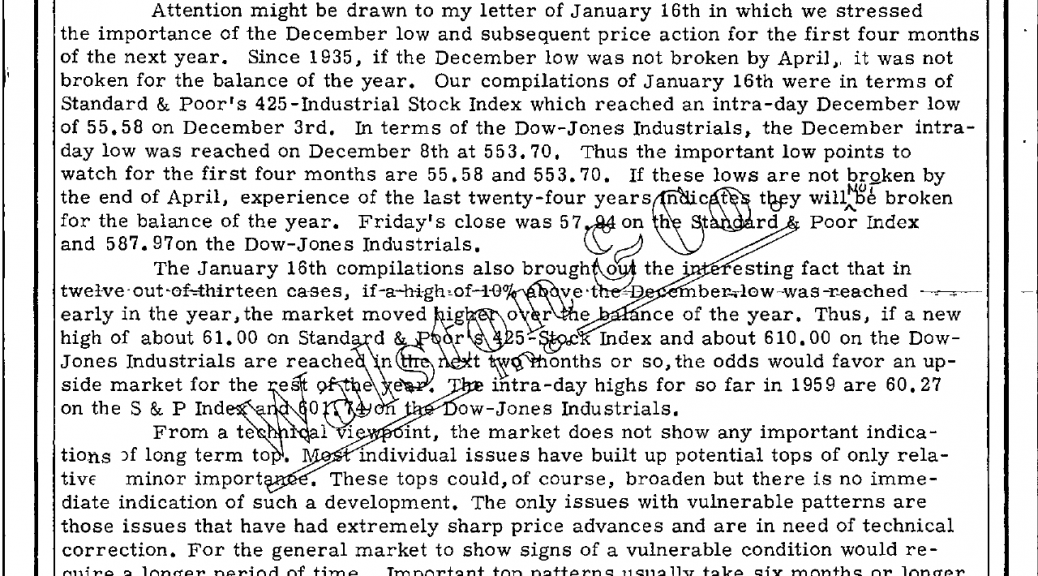 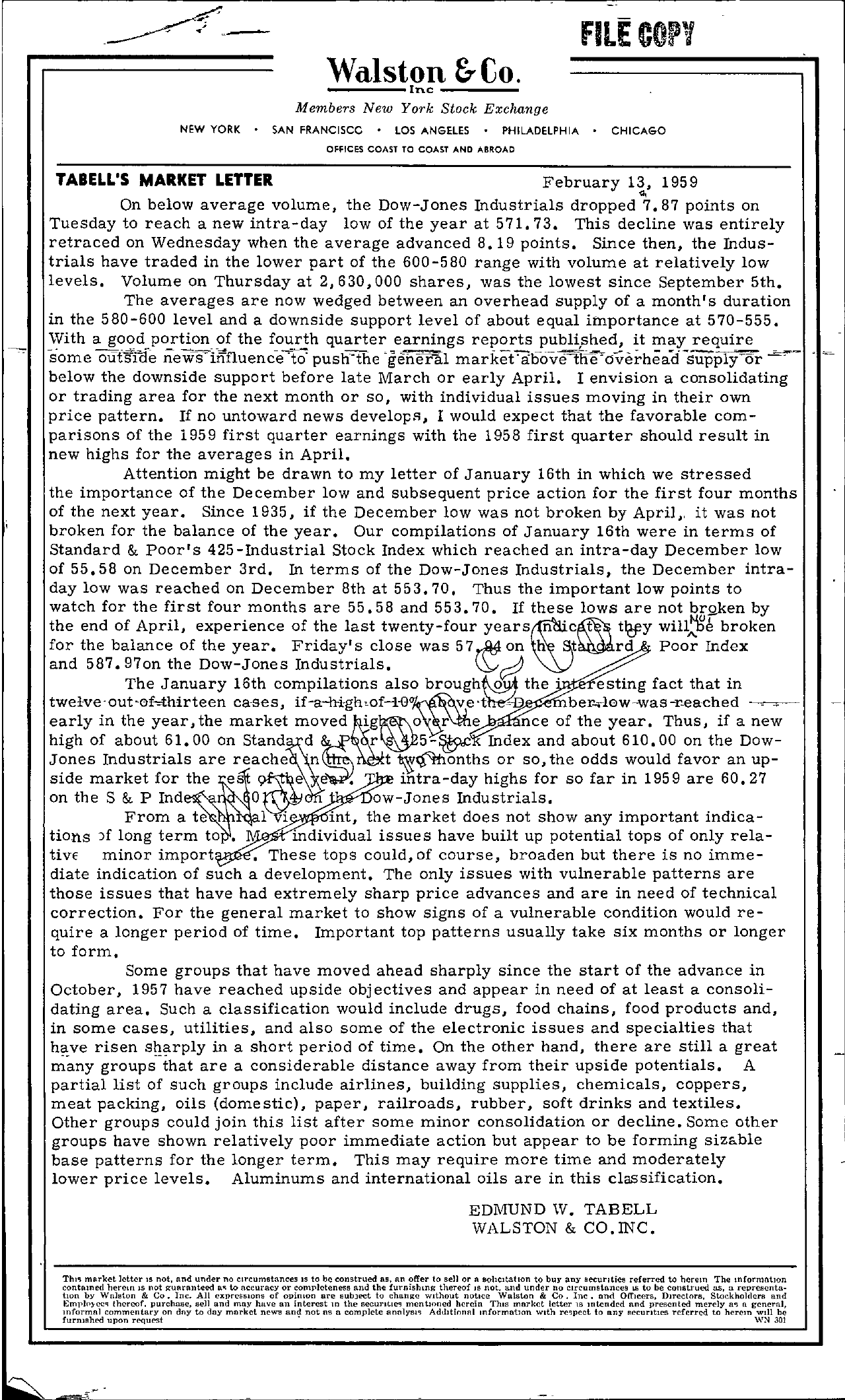 FILE COpy Wdlston &Co. —-Inc —- Members New York Stock Exchange NEW YORK SAN FRANCISCC LOS ANGELES PHILADELPHIA OFFICES COAST TO COAST AND ABROAD CHICAGO TABELL'S MARKET LETTER February 13, 1959 On below average volume, the Dow-Jones Industrials dropped 7.87 pOints on Tuesday to reach a new intra-day low of the year at 571. 73. This decline was entirely retraced on Wednesday when the average advanced 8.19 pOints. Since then, the Indus- trials have traded in the lower part of the 600-580 range with volume at relatively low levels. Volume on Thursday at 2,630,000 shares, was the lowest since September 5th. The averages are now wedged between an overhead supply of a month's duration in the 580-600 level and a downside support level of about equal importance at 570-555. With a good portion of the fourth quarter earnings reports published, it may require -some outSicfe news-iirfluence -to- push-the -general markefa'oQve-tK-e'overheadsupply'Or-.-',..—- below the downside support before late March or early April. I envision a consolidating or trading area for the next month or so, with individual issues moving in their own price pattern. If no untoward news developl'i, I would expect that the favorable com- parisons of the 1959 first quarter earnings with the 1958 first quarter should result in new highs for the averages in April. Attention might be drawn to my letter of January 16th in which we stressed the importance of the December low and subsequent price action for the first four months of the next year. Since 1935, if the December low was not broken by April,. it was not broken for the balance of the year. Our compilations of January 16th were in terms of Standard & Poor's 425-Industrial Stock Index which reached an intra-day December low of 55.58 on December 3rd. In terms of the Dow-Jones Industrials, the December intra- day low was reached on December 8th at 553.70. Thus the important low points to watch for the first four months are 55.58 and 553.70. If these lows are not brQken by the end of April, experience of the last twenty-four wi1l!e broken for the balance of the year. Friday's close was 57 '0Ydand 587.97on the Dow-Jones Industrials. on Ii Poor Index The January 16th compilations also the' esting fact that in twelve -out ca-ses, if-a-hi-gh ber…lew-was -r.ea-ched early in the year,the market nce of the year. Thus, if a new high of about 61.00 on Index and about 610.00 on the Dow- Jones Industrials are reache 'n t or so, the odds would favor an up- side market for the e e. intra-day highs for so far in 1959 are 60.27 on the S & P Ind 0 ow-Jones Industrials. From a te 1 i int, the market does not show any important indica- tions )f long term to individual issues have built up potential tops of only rela- tiVE minor import These tops could, of course, broaden but there is no imme- diate indication of such a development. The only issues with vulnerable patterns are those issues that have had extremely sharp price advances and are in need of technical correction. For the general market to show signs of a vulnerable condition would re- quire a longer period of time. Important top patterns usually take six months or longer to form. Some groups that have moved ahead sharply since the start of the advance in October, 1957 have reached upside objectives and appear in need of at least a consoli- dating area. Such a classification would include drugs, food chains, food products and, in some cases, utilities, and also some of the electronic issues and specialties that howe risen shlrply in a short period of time. On the other hand, there are still a great many groups that are a considerable distance away from their upside potentials. A partial list of such groups include airlines, building supplies, chemicals, coppers, meat packing, oils (domestic), paper, railroads, rubber, soft drinks and textiles. Other groups could join this list after some minor consolidation or decline. Some other groups have shown relatively poor immediate action but appear to be forming sizc.ble base patterns for the longer term. This may require more time and moderately lower price levels. Aluminums and international oils are in this classification. EDMUND W. TABELL WALSTON & CO.INC. Thl'l market letter IS not, and under no circumstances IS to be construed as, an offer to sell or n sohCltatlOn to buy any securities referred to herein The informatIOn contamed herem 15 not guaranteed no; to nccuracy or completeness and the furnishing thereof lS not, and under no clrcumstnnces is to be construed us, a representa- hon by ,Valston & Co, Jnc. All expressions of opinion arc subJect to change Without notice Walston & Co, Inc, nnd Officers, Directors, Stockholders and thereof, purchase, seJl and may huve an intE!rcst 1n the mentIOned herein ThiS market letter 1S Ifltcnded nnd presented merely a'J a general, mformal commentary on day to day mnrket ne….'S and not os a complete anolYSI'J Ad,htinnal IflformatlOn With re'Jpect to IIny securities referred to herem Will be furmshed upon r e q u e s t ' 30l