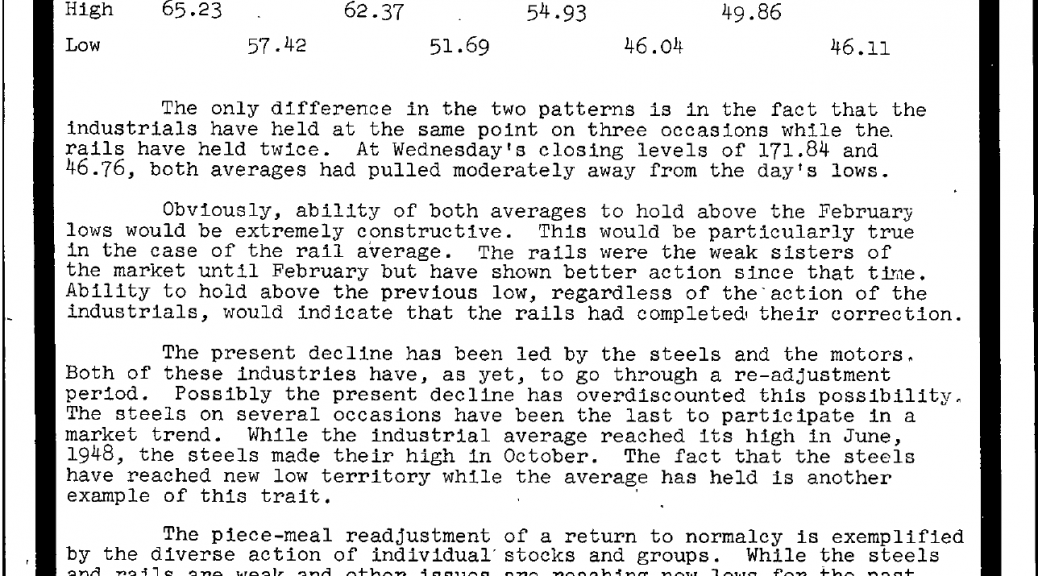 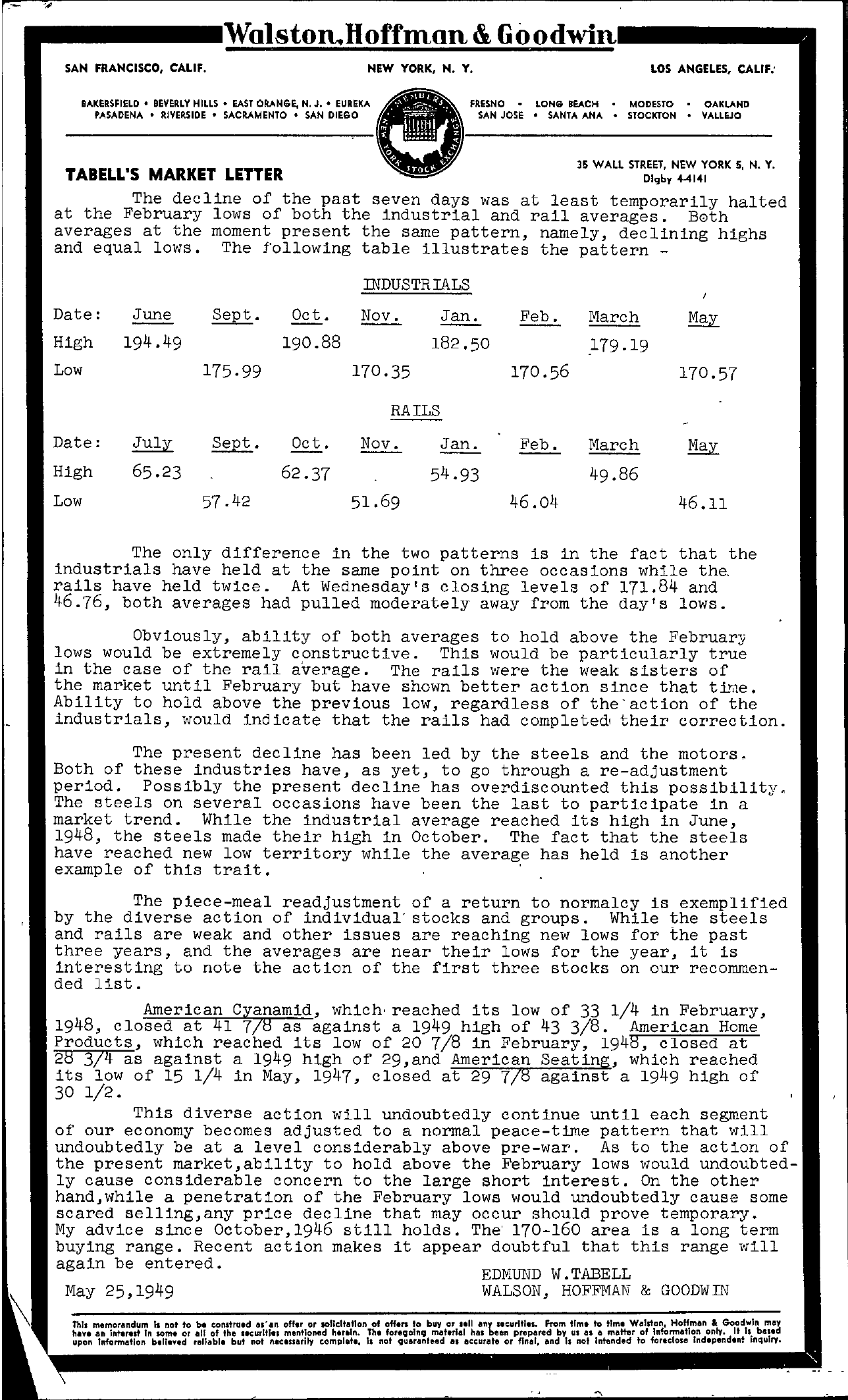 TABELL'S MARKET LETTER 35 WAll STREET. NEW YORK 5, N. Y. Digby 4-4141 The decline of the past seven days was at least temporarily halted at the February lows of both the industrial and rail averages. B0th averages at the moment present the same pattern, namely, declining highs and equal lows. The following table illustrates the pattern Date High Low June 194.49 Sept. 175.99 INDUSTRIALS Oct. Nov. Jan. 190.88 182.50 170.35 Feb. 170.56 March 179.19 170.57 Date High Low July 65.23 Sept. 57.42 Oct. 62.37 RAILS Nov. Jan. 54.93 51.69 Feb. 46.04 March 49.86 46.11 The only difference in the two patterns is in the fact that the industrials have held at the same point on three occasions while the. rails have held twice. At Wednesday's closing levels of 171.84 and 46.76, both averages had pulled moderately away from the day's lows. Obviously, ability of both averages to hold above the February lows would be extremely constructive. This would be particularly true in the case of the rail average. The rails were the weak sisters of the market until February but have shown better action since that tir.1e. Ability to hold above the previous low, regardless of the'action of the industrials, would indicate that the rails had completedl their correction. The present decline has been led by the steels and the motors. these industries have, as yet, to go through are-adjustment period. Possibly the present decline has overdiscounted this possibility. The steels on several occasions have been the last to participate in a market trend. While the industrial average reached its high in June, 1948, the steels made their high in October. The fact that the steels have reached new low territory while the average has held is another example of this trait. . The piece-meal readjustment of a return to normalcy is exemplified by the diverse action of individual'stocks and groups. While the steels and rails are weak and other issues are reaching new lows for the past three years, and the averages are near their lows for the year, it is interesting to note the action of the first three stocks on our recommended list. American Cyanamid, which, reached its low of 33 1/4 in February, 1948, closed at 41 778 as against a 1949 high of 43 3/8. American Home Products, which reached its low of 20 7/8 in February, 1948, closed at 28 3/4 as against a 1949 high of 29,and American Seating, which reached its low of 15 1/4 in May, 1947, closed at 29 7/8 against a 1949 high of 30 1/2. This diverse action will undoubtedly continue until each segment of our economy becomes adjusted to a normal peace-time pattern that will undoubtedly be at a level considerably above pre-war. As to the action of the present market,ability to hold above the February lows would undoubtedly cause conSiderable concern to the large short interest. On the other hand,while a penetration of the February lows would undoubtedly cause some scared selling,any price decline that may occur should prove temporary. My advice since October,1946 still holds. The' 170-160 area is a long term buying range. Recent action makes it appear doubtful that this range will again be entered. May 25,1949 EDMUND W.TABELL WALSON, HOFFMAN & GOODWIN Thil memorandum h not to be eonltru.d iIIl' an off.r or solicitation of off.rs to buy or 1.11 any I.curltl.s. From tIm. to tim. Weldon, Hoffman & Goodwin may haY. an Interest In some or all of the curltl mentioned h.r.ln. Th. fot.;oln; mat.rlal hal been prepared by us as ill matter of Infonnaflon only. It Is bas.d upon 'nformatlon b.II….d rellabl. but not n.c.uarily complte, Is l'Iot quaranteed al eccurate or flnlll, and Is not Intended to foreclose Independ.nt Inquiry.