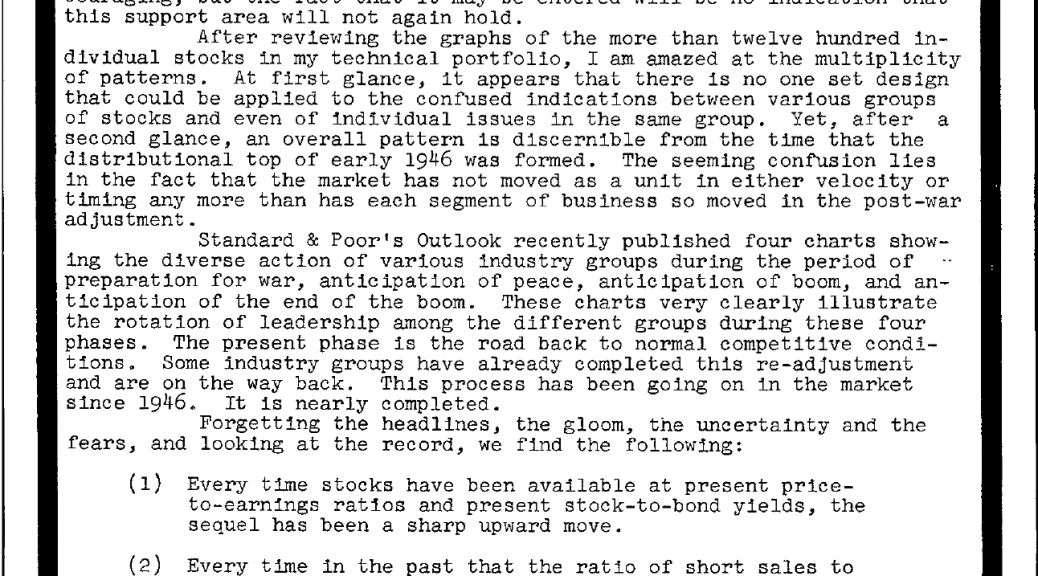 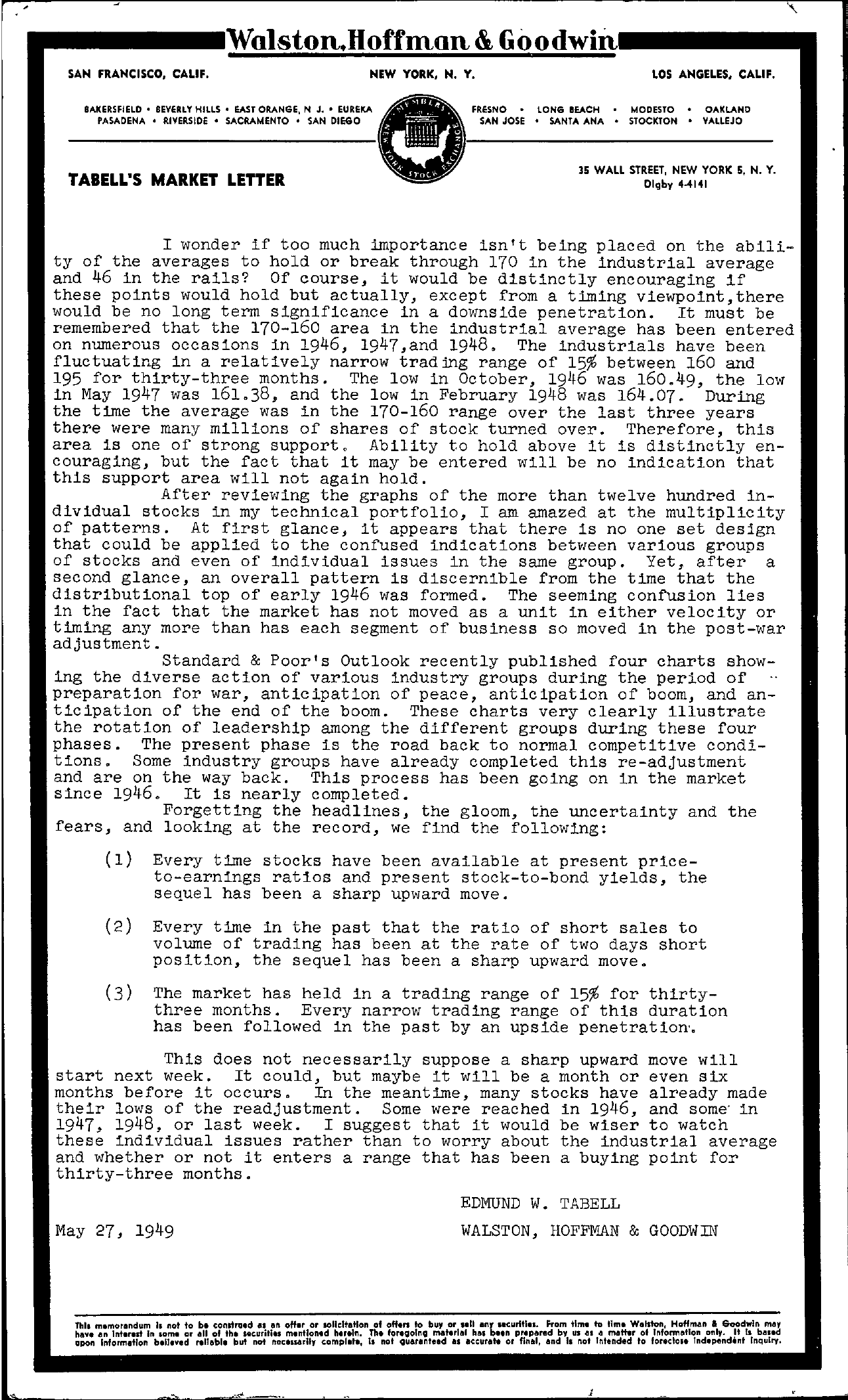 TABELL'S MARKET LETTER 35 WALL STREET. NEW YORK 5. N. Y. Digby 4.01141 I wonder if too much importance isn't being placed on the ability of the averages to hold or break through 170 in the industrial average and 46 in the rails Of course, it would be distinctly encouraging if these points would hold but actually, except from a timing viewpoint,there would be no long term significance in a downside penetration. It must be remembered that the 170-160 area in the industrial average has been entered on numerous occasions in 1946, 1947,and 1948. The industrials have been fluctuating in a relatively narrow trading range of 15 between 160 and 195 for thirty-three months. The low in October, 1946 was 160.49, the low in May 1947 was 161.38, and the low in February 1948 was 164.07. During the time the average was in the 170-160 range over the last three years there were many millions of shares of stock turned over. Therefore, this area is one of strong support. Ability to hold above it is distinctly encouraging, but the fact that it may be entered will be no indication that this support area will not again hold. After reviewing the graphs of the more than twelve hundred individual stocks in my technical portfoliO, I am amazed at the multiplicity of patterns. At first glance, it appears that there is no one set design that could be applied to the confused indications between various groups of stocks and even of individual issues in the same group. Yet, after a second glance, an overall pattern is discernible from the time that the distributional top of early 1946 was formed. The seeming confusion lies in the fact that the market has not moved as a unit in either velOCity or timing any more than has each segment of business so moved in the post-war adjustment. Standard & Poor's Outlook recently published four charts show- ing the diverse action of various industry groups during the period of preparation for war, anticipation of peace, anticipation of boom, and anticipation of the end of the boom. These charts very clearly illustrate the rotation of leadership among the different groups during these four phases. The present phase is the road back to normal competitive conditions. Some industry groups have already completed this re-adjustment and are on the way back. This process has been going on in the market since 1946. It is nearly completed. Forgetting the headlines, the gloom, the uncertainty and the fears, and looking at the record, we find the following (1) Every time stocks have been available at present priceto-earnings ratios and present stock-to-bond yields, the sequel has been a sharp upward move. (2) Every time in the past that the ratio of short sales to volume of trading has been at the rate of two days short pOSition, the sequel has been a sharp upward move. (3) The market has held in a trading range of 15 for thirtythree months. Every narrow trading range of this duration has been followed in the past by an upside penetration. This does not necessarily suppose a sharp upward move will start next week. It COUld, but maybe it will be a month or even six months before it occurs. In the meantime, many stocks have already made their lows of the readjustment. Some were reached in 1946, and some' in 1947, 1948, or last week. I suggest that it would be wiser to watch these individual issues rather than to worry about the industrial average and whether or not it enters a range that has been a buying point for thirty-three months. EDMUND W. TABELL WALSTON, HOFFMAN & GOODWIN TtlI, memorandum I. not to b, conJtra,d a. eft off.r Clf solldtatlon of offers to buy or ,.11 any curltl… From tim. to tim. Wellton, Hoffman & Goodwin may have fin Int.r.d In some or all of the securitl m,ntloned her,ln. Th, for.;olnt mat.rlal hal b.,n prtpared by us a. a matf1lr of Informallon only. It I, ba.ed apon Information b,n..d rtllebl. but not nac.lI4rUy complete, Is not Quaranteed al accura.. or rlMI, end II not Intended to foreclole Independ'nt Inquiry. 1