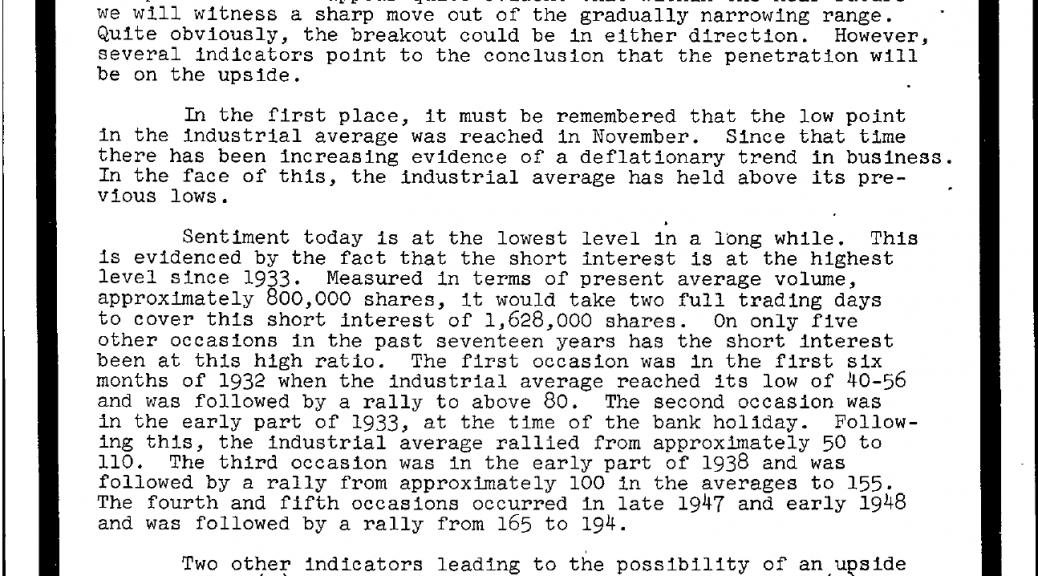 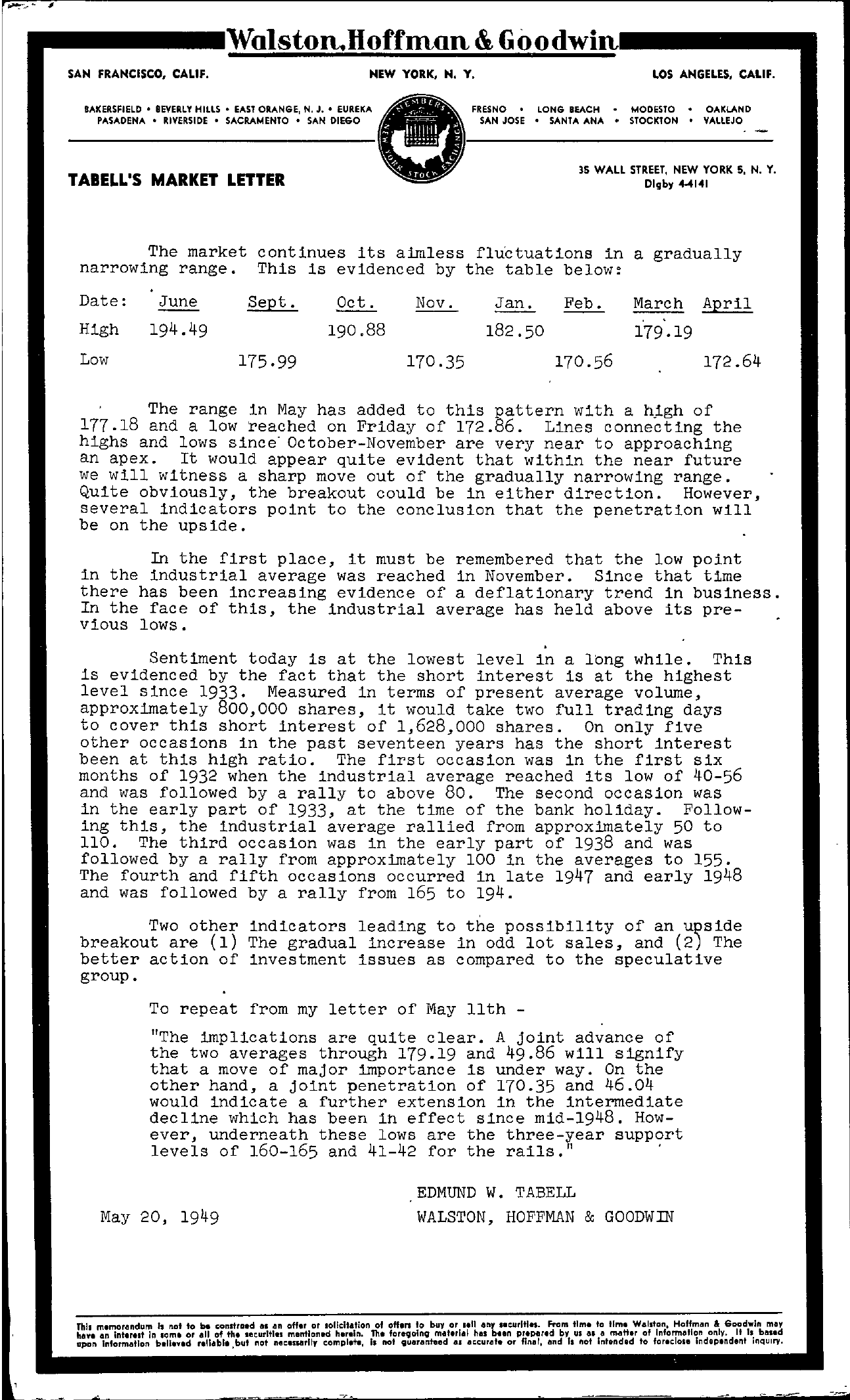 TABELL'S MARKET LETTER 35 WALL STREET, NEW YORK 5. N. Y. Dlgby ….. 141 The market continues its aimless flu'ctuations in a gradually narrowing range. This is evidenced by the table below Date High Low June 194.49 Se2t. 175.99 Oct. 190.88 Nov. 170.35 Jan. Feb. 182.50 170.56 March A2 rll 179.19 172.64 The range in May has added to this pattern with a hgh of 177.18 and a low reached on Friday of 172.86. Lines connecting the highs and lows since' October-November are very near to approaching an apex. It would appear quite evident that within the near future we will witness a sharp move out of the gradually narrowing range. QUite obviously, the breakout could be in either direction. However, several indicators point to the conclusion that the penetration will be on the upside. In the first place, it must be remembered that the low point in the industrial average was reached in November. Since that time there has been increasing evidence of a deflationary trend in business. In the face of this, the industrial average has held above its previous lows. Sentiment today is at the lowest level in a long while. This is evidenced by the fact that the short interest is at the highest level since 1933. Measured in terms of present average volume, approximately 800,000 shares, it would take two full trading days to cover this short interest of 1,628,000 shares. On only five other occaSions in the past seventeen years has the short interest been at this high ratio. The first occasion was in the first six months of 1932 when the industrial average reached its low of 40-56 and was followed by a rally to above 80. The second occasion was in the early part of 1933, at the time of the bank holiday. Following this, the industrial average rallied from approximately 50 to 110. The third occasion was in the early part of 1938 and was followed by a rally from approximately 100 in the averages to 155. The fourth and fifth occasions occurred in late 1947 and early 1948 and was followed by a rally from 165 to 194. Two other indicators leading to the possibility of an uside breakout are (1) The gradual increase in odd lot sales, and (2) The better action of investment issues as compared to the speculative group. To repeat from my letter of May 11th – The implications are quite clear. A joint advance of the two averages through 179.19 and 49.86 will signify that a move of major importance is under way. On the other hand, a Joint penetration of 170.35 and 46.04 would indicate a further extension in the intermediate decline which has been in effect since mid-1948. How- ever, underneath these lows are the three-year support levels of 160-165 and 41-42 for the rails. ' May 20, 1949 EDMUND W. TABELL WALSTON, HOFFMAN & GOODWIN nThl. memorandum I. not to be constraed al an offer or solldlatlon of oHert to buy or an!, curltl… Ftcm tim. to tlrM Waldon, Hoffman & Goodwin may he…. an Interest In lome or all of the lee.urille. mentioned h….ln. The 10r8401nQ mat.rlal hill een prePfifed by UI a. a matt.r of Information only. It Is baled upon Information believed r.nabl. ,but not nachllltn, compl.te, Is not Quaranteed 41 accuret. or nnal, lind fa not In'ondld to forlclose Indlplndent InqUiry.