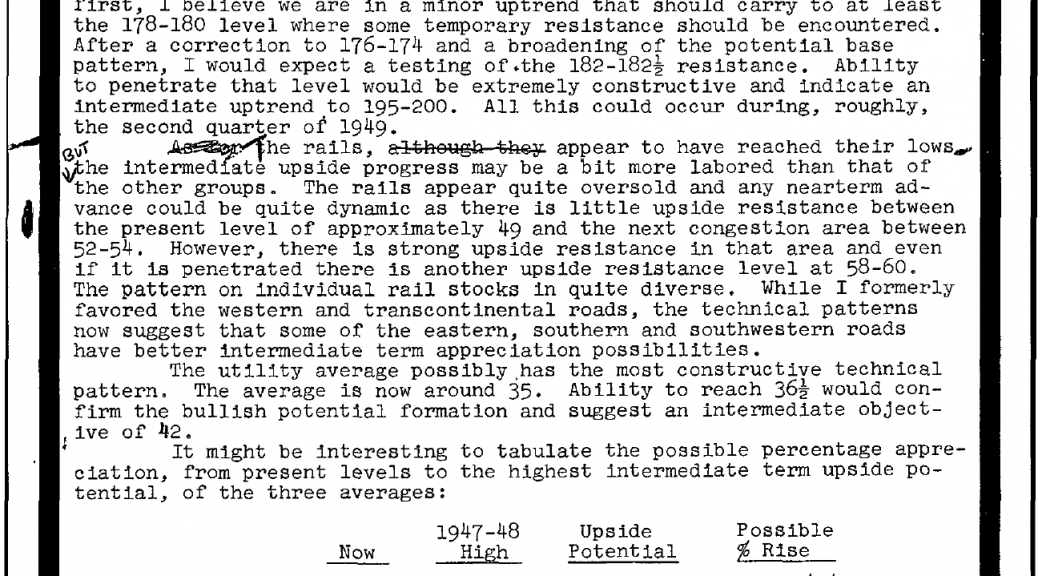 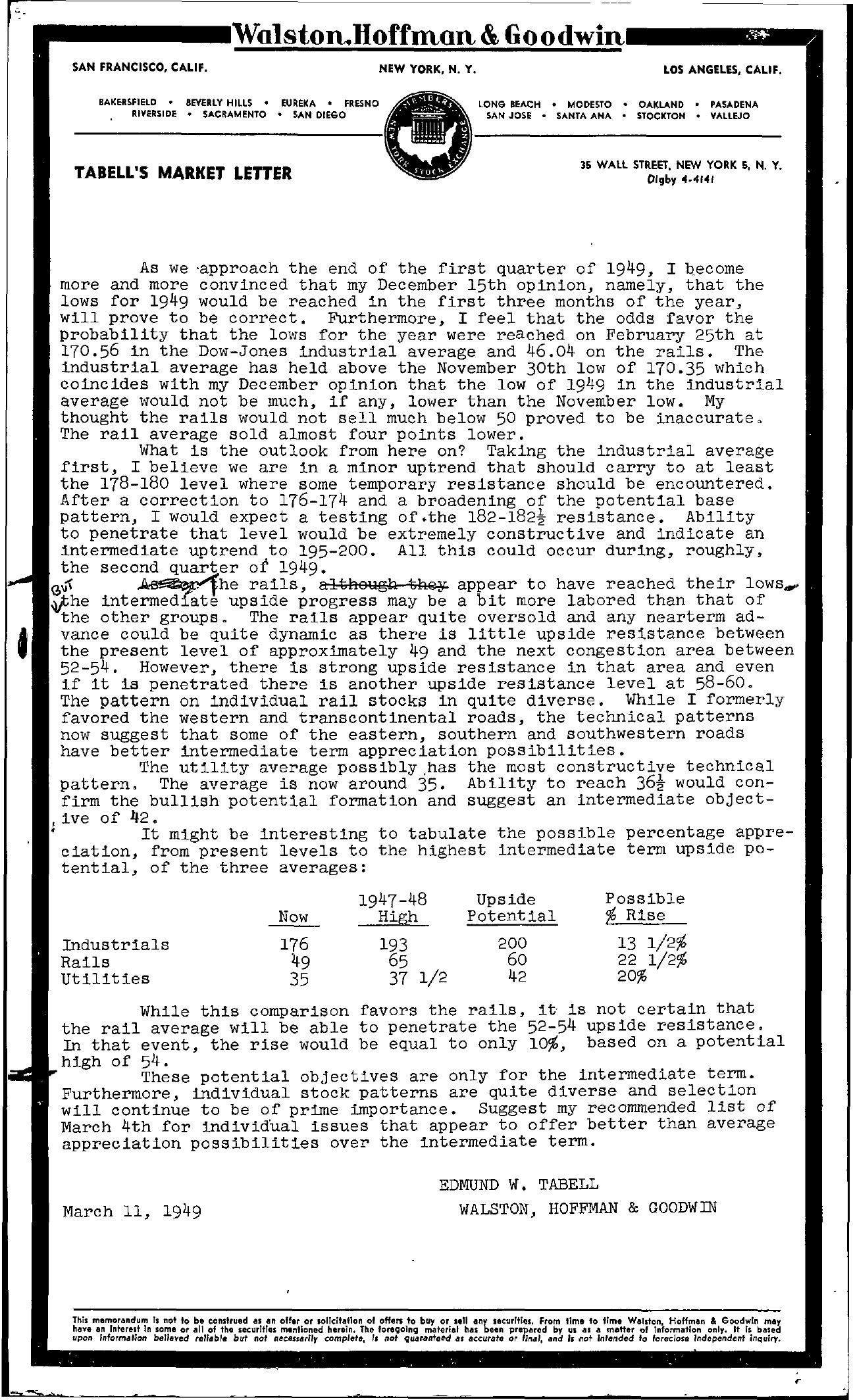 TABELL'S MARKET LETTER 35 WALL STREET, NEW YORK 5, N. Y. Digby 44141 As we 'approach the end of the first quarter of 1949, I Qecome and more convinced that my December 15th opinion, namely, that the for 1949 would be reached in the first three months of the year, will prove to be correct. Furthermore, I feel that the odds favor the probability that the lows for the year were reached on February 25th at 170.56 in the Dow-Jones industrial average and 46.04 on the rails. The industrial average has held above the November 30th low of 170.35 which coincides with my December opinion that the low of 1949 in the industrial average would not be much, if any, lower than the November low. My thought the rails would not sell much below 50 proved to be inaccurate 0 The rail average sold almost four pOints lower. What is the outlook from here on Taking the industrial average first, I believe we are in a minor uptrend that should carry to at least the 178-180 level where some temporary resistance should be encountered. After a correction to 176-174 and a broadening of the potential base pattern, I would expect a testing of.the 182-182t resistance. Ability to penetrate that level would be extremely constructive and indicate an intermediate uptrend to 195-200. All this could occur during, roughly, the second quarter of 1949. he rails, altRsUQ tH appear to have reached their lows… intermedrat upside progress may be a bit more labored than that of other groups. The rails appear quite oversold and any nearterm advance could be quite dynamic as there is little upside resistance between the present level of approximately 49 and the next congestion area between 52-54. However, there is strong upside resistance in that area and even if it is penetrated there is another upside resistance level at 58-60. The pattern on individual rail stocks in quite diverse. While I formerly favored the western and transcontinental roads, the technical patterns now suggest that some of the eastern, southern and southwestern roads have better intermediate term appreciation possibilities. The utility average possibly .has the most constructiye technical pattern. The average is now around 35. Ability to reach 362 would confirm the bullish potential formation and suggest an intermediate object- ive of 42. I It might be interesting to tabulate the possible percentage appre- Ciation, from present levels to the highest intermediate term upside po- tential, of the three averages Industrials Rails Utilities Now 1947-48 High Upside Potential POSSible 2f Rise 176 193 200 49 65 60 35 37 1/2 42 13 1/2 22 1/2 20 While this comparison favors the rails, it is not certain that the rail average will be able to penetrate the 52-54 upside resistance. In that event, the rise would be equal to only 10, based on a potential high of 54. These potential objectives are only for the intermediate term. Furthermore, individual stock patterns are quite diverse and selection will continue to be of prime importance. Suggest my recommended list of March 4th for individ'ual issues that appear to offer better than average appreciation possibilities over the intermediate term. March 11, 1949 EDMUND W. TABELL WALSTON, HOFFMAN & GOODWIN This memorandum Is not to be construed liS an offer or solicitation of offers to buy or ,.11 any securities. From time to tIme Waldon. Hoffman & Goodwin may have an Interest In some or all of the securities mentioned herein. The fore;olng material has been prepared by lUI as III metter of Information only. It Is based upon InformatJon bell.ned rel1abl. but not neceuarlly complete, ,. not quaratrteed al eccurate or fin,,', and II not Intended to foreclose independenf inquiry.