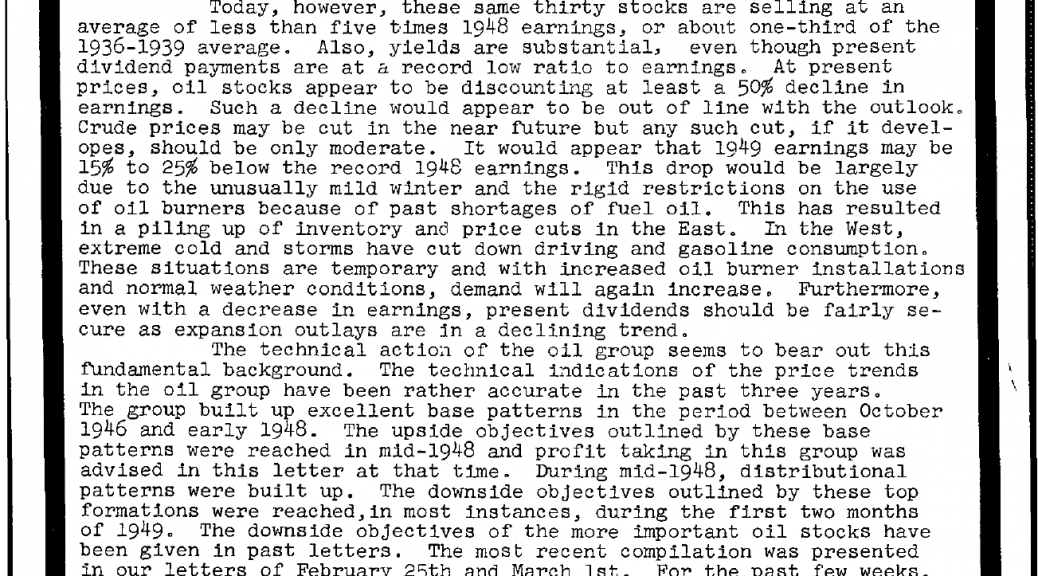 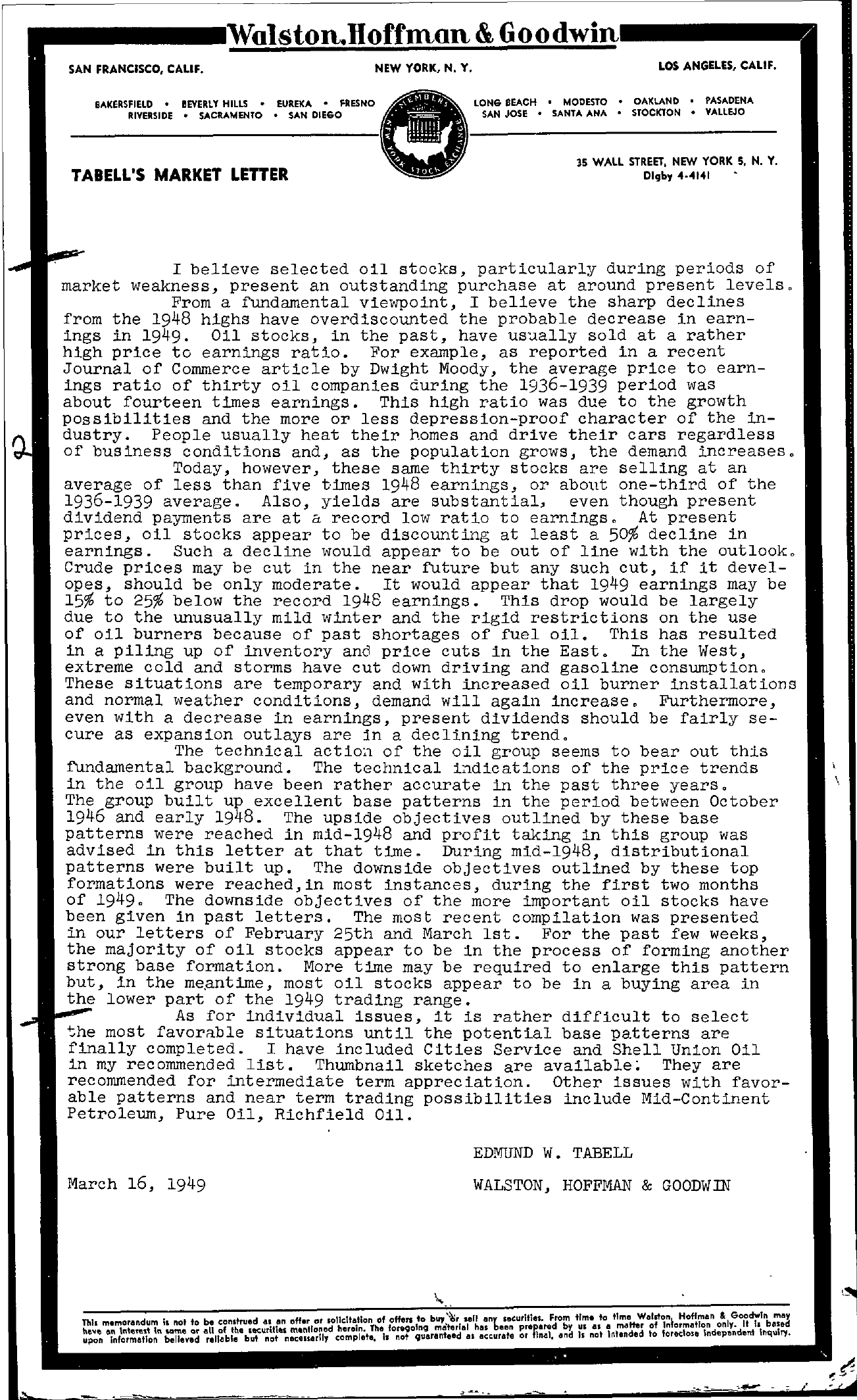 SAN FRANCISCO, CALIF. NEW YORK, N. Y. LOS ANGELES, CALIF. BAKERSFIELD IIEVERlY HilLS EUREKA FRESNO RIVERSIDE SACRAMENTO SAN DIEGO LONG BEACH MODESTO SAN JOSE SANTA ANA OAKLAND STOCKTON PASADENA VALLEJO TABELL'S MARKET LEnER 35 WAll STREET, NEW YORK 5, N. Y. Digby 44141 I believe selected oil stocks, particularly during periods of market weakness, present an outstanding purchase at around present levels. From a fundamental viewpoint, I believe the sharp declines from the 1948 highs have overdiscounted the probable decrease in earnings in 1949. Oil stocks, in the past, have usally sold at a rather high price to earnings ratio. For example, as reported in a recent Journal of Commerce article by Dwight Moody, the average price to earn- ings ratio of thirty oil companies during the 1936-1939 period was about fourteen times earnings. This high ratio was due to the growth possibilities and the more or less depression-proof character of the industry. People usually heat their homes and drive their cars regardless of bUSiness conditions and, as the population grows, the demand increases. Today, however, these same thirty stocks are selling at an average of less than five times 1948 earnings, or about one-third of the 1936-1939 average. Also, yields are substantial, even though present dividend payments are at a record low ratio to earnings. At present prices, oil stocks appear to be discounting at least a 50 decline in earnings. Such a decline would appear to be out of line with the outlook. Crude prices may be cut in the near future but any such cut, if it devel- opes, should be only moderate. It would appear that 1949 earnings may be 15 to 25 below the record 1948 earnings. This drop would be largely due to the unusually mild winter and the rigid restrictions on the use of oil burners because of past shortages of fuel oil. This has resulted in a piling up of inventory ano price cuts in the East. In the West, extreme cold and storms have cut down driving and gasoline consumption. These situations are temporary and with increased oil burner installations and normal weather conditions, demand will again increase. Furthermore, even with a decrease in earnings, present dividends should be fairly se- cure as expansion outlays are jn a declining trend. The technical actio;1 of the oil group seems to bear out this fundamental background. The technical irldications of the price trends in the oil group have been rather accurate in the past three years. The group built up excellent base patterns in the period between October 1946 and early 1948. The upside objectives outlined by these base patterns were reached in mid-1948 and profit taking in this group was advised in this letter at that time. During mid-1948, distributional patterns were built up. The downside objectives outlined by these top formations were reached,in most instances, during the first two months of 1949. The dovmside objectives of the more important oil stockS have been given in past letters. The most recent compilation was presented in our letters of February 25th and March 1st. For the past few weeks, the majority of oil stocks appear to be in the process of forming another strong base formation. More time may be required to enlarge this pattern but, in the me.antime, most oil stocks appear to be in a buying area in the lower part of the 1949 trading range. As for individual issues, it is rather difficult to select he most favorble situations until the potential base patterns are finally completed. I have included Cities Service and Shell Union Oil in my recommended list. Thumbnail sketches are available They are recommended for intermediate term appreciation. Other issues with favorable patterns and near term trading possibilities include Mid-Continent Petroleum, Pure Oil, Richfield Oil. March 16, 1949 EDMUND W. TABELL WALSTON, HOFFMAN & GOODWIN