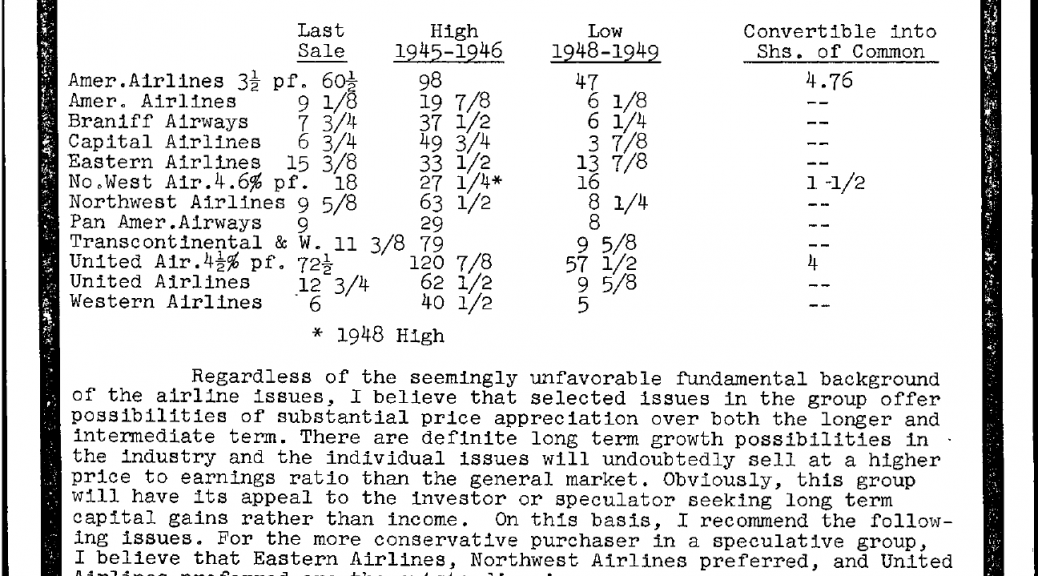 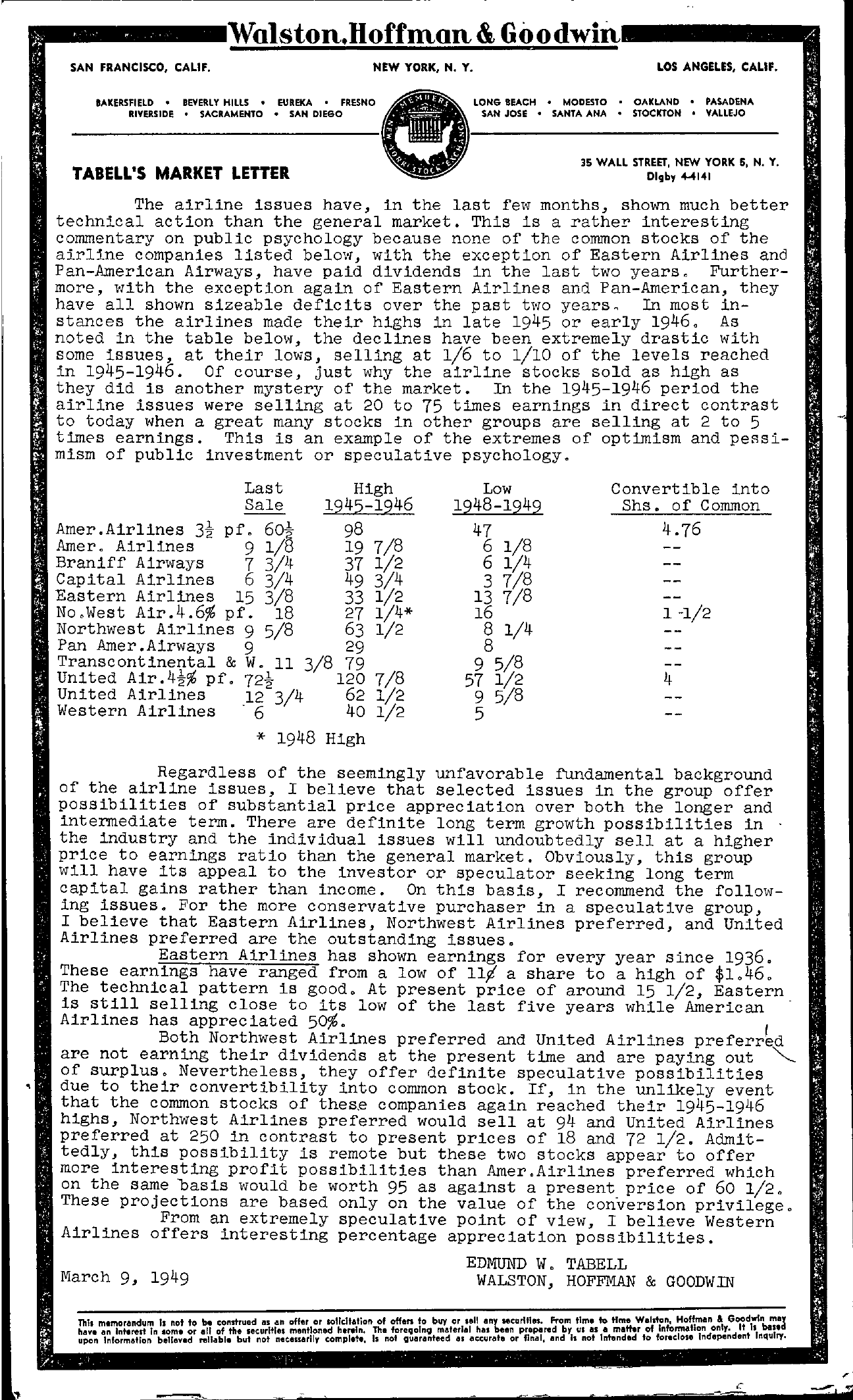 TABELL'S MARKET LETTER 35 WALL STREET, NEW YORK 5, N. Y. DIgby 4-4141 The airline issues have, in the last few months, shown much better technical action than the general market. This is a rather interesting commentary on public psychology because none of the common stocks of the airline companies listed below, with the exception of Eastern Airlines and Pan-American Airways, have paid dividends in the last two years, Further- more, with the exception again of Eastern Airlines and Pan-American, they have all shown sizeable deficits over the past two years, In most in- stances the airlines made their highs in late 1945 or early 1946. As noted in the table below, the declines have been extremely drastic with some issues, at their lows, selling at 1/6 to 1/10 of the levels reached in 1945-1946. Of course, just why the airline stocks sold as high as they did is another mystery of the market. In the 1945-1946 period the airline issues were selling at 20 to 75 times earnings in direct contrast to today when a great many stocks in other groups are selling at 2 to 5 times earnings. This is an example of the extremes of optimism and pessi- mism of public investment or speculative psychology. Last Sale High 1945-1946 Amer.Airlines 3 pf. 60 9S Amer. Airlines 9 liS 19 7/S Braniff Airways 7 3/4 37 1/2 Capital Airlines 6 3/4 49 3/4 Eastern Airlines 15 3/S 33 1/2 No.West Air.4.6 pf. IS 27 1/4 Northwest Airlines 9 5/S 63 1/2 Pan Amer.Airways 9 29 Transcontinental & W. 11 United Air.4 pf. 72 3/S 79 120 7/S United Airlines 12 3/4 62 1/2 Western Airlines – 6 40 1/2 1945 High Low 1945-1949 47 6 liS 6 1/4 3 7/S 137/S 16 S 1/4 S 9 5/S 57 1/2 9 5/S 5 Convertible into Shs. of Common 4.76 1-1/2 4 Regardless of the seemingly unfavorable fUndamental background of the airline issues, I believe that selected issues in the group offer possibilities of substantial price appreciation over both the longer and intermediate term. There are definite long term growth possibilities in – the industry and the individual issues will undoubtedly sell at a higher price to earnings ratio than the general market. Obviously, this group will have its appeal to the investor or speculator seeking long term capital gains rather than income. On this baSiS, I recommend the follow- ing issues. For the more conservative purchaser in a speculative group, I believe that Eastern Airlines, Northwest Airlines preferred, and United Airlines preferred are the outstanding issues. Eastern Airlines has shown earnings for every year since 1936. These earnings have ranged from a low of IIi a share to a high of 1.46. The technical pattern is good. At present price of around 15 1/2, Eastern is still selling close to its low of the last five years while American Airlines has appreciated 50. , Both Northwest Airlines preferred and United Airlines preferred are not earning their dividends at the present time and are paying out of surplus. Nevertheless, they offer definite speculative possibilities due to their convertibility into conon stock. If, in the unlikely event that the common stocks of thes.e companies again reached their 1945-1946 highs, Northwest Airlines preferred would sell at 94 and United Airlines preferred at 250 in contrast to present prices of IS and 72 1/2. Admit- tedly, this possibility is remote but these two stocks appear to offer more interesting profit possibilities than Amer.Airlines preferred which on the same basis would be worth 95 as against a present price of 60 1/2, These prOjections are based only on the value of the conversion privilege. From an extremely speculative point of View, I believe Western offers interesting percentage appreciation possibilities. EDMUND W. TABELL WALSTON, HOFFMAN & GOODWIN Thl, memorandum 11 not to b, construed ill an offer or solicitation of offen to buy or ,ell IIny securities. From tIme to time Walston, Hoffman & Goodwlmal have an Int.rest In .om. or all of tit securities mentioned h.,..ln. The foroliloll'lO material has been prepared by us liS matter of Information only. It Is'n u;' upon Information belloed reliable but not neeels.!!r!ly complete, Is not Quaranteed as accurate or final, and II not Intended to fonlClose Independent q ry.