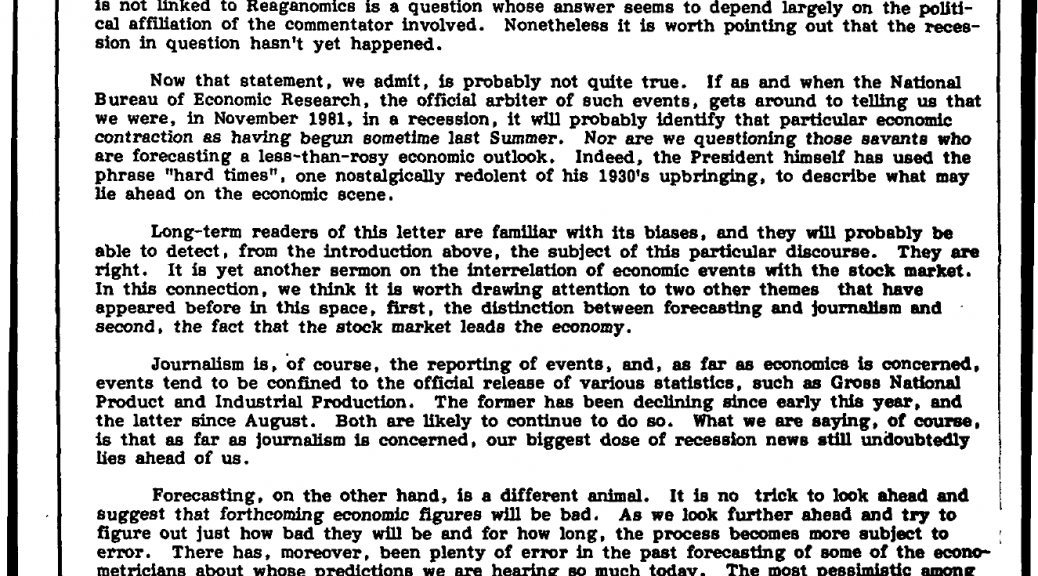 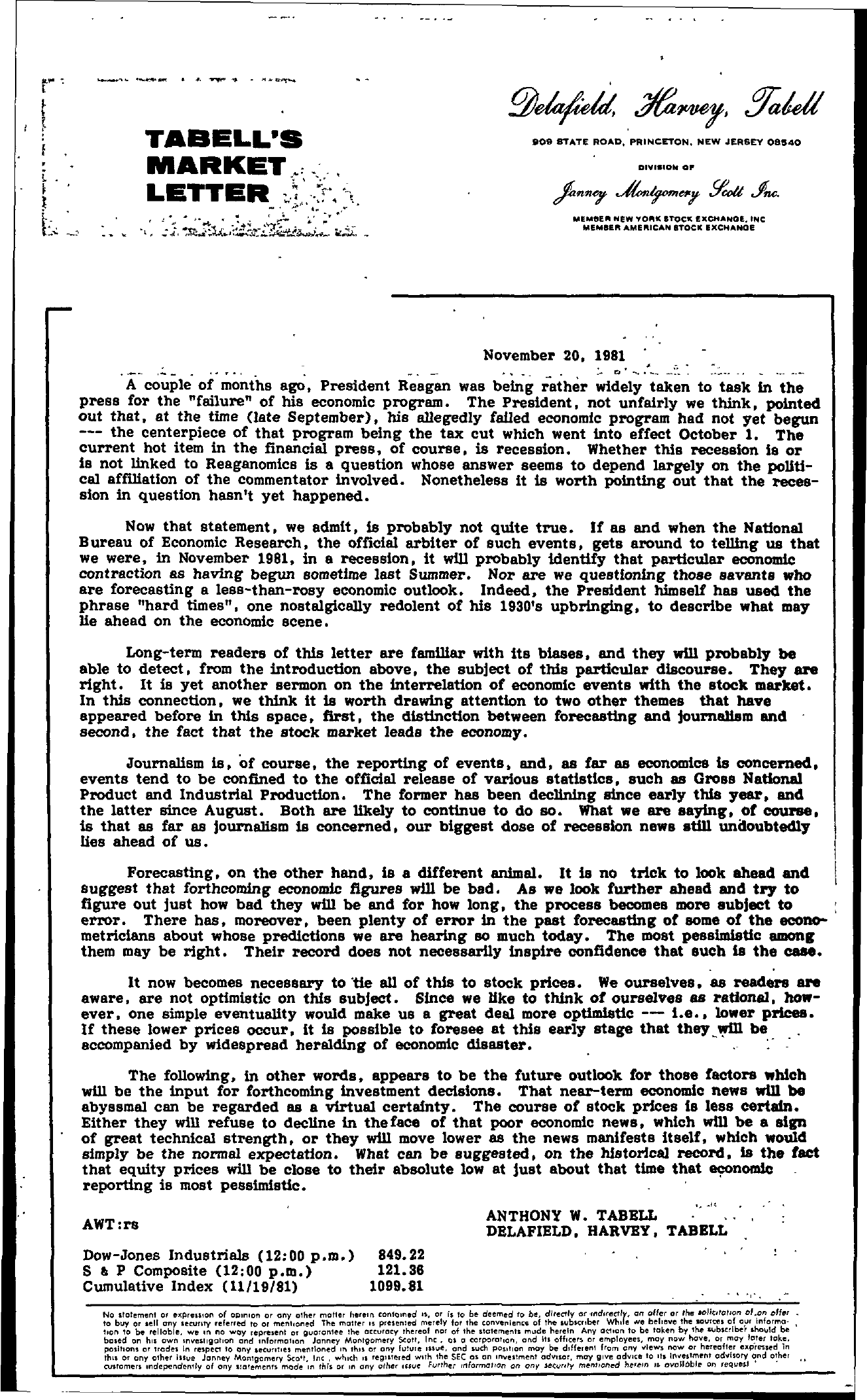 TABELL'S .MARKET . , , R, '/t,) .; .t, .'S.b.J-.a;.tlr'. il''; 809 STATE ROAD, PRINCETON. NEW JERSEY 08540 DIYI.IO' OF MEMeE HEW YO STOCK EXCHANGE, INC MUISE AMEIIlICAN 8TOCK EXCHANQE – .- ….November 20, 1981 – ' '- – – ..- —- A couple' of months ago, President Reagan was being rather widely taken to task in the press for the failure of his economic program. The President, not unfairly we think, pointed out that, at the time (late September), his allegedly failed economic program had not yet begun the centerpiece of that program being the tax cut Which went into effect October 1. The current hot item in the financial press, of course, is recession. Whether this recession is or is not linked to Reaganomics is a question whose answer seems to depend largely on the poHti- cal affiliation of the commentator involved. Nonetheless it is worth pointing out that the reces- sion in question hasn't yet happened. Now that statement, we admit, is probably not quite true. If as and when the National Bureau of Economic Research, the official arbiter of such events, gets around to telling us that we were, in November 1981, in a recession, it wU1 probably identify that particular economic contraction as having begun sometime last Summer. Nor are we questioning those savants who are forecasting a less-than-rosy economic outlook. Indeed, the President himself has used the phrase hard times, one nostalgically redolent of his 1930's upbringing, to describe what may lie ahesd on the economic scene. Long-term readers of this letter are familiar with its biases, and they wU1 probably be able to detect, from the introduction above, the subject of this particular discourse. They are right. It is yet another sermon on the interrelation of economic events with the stock market. In this connection, we think it is worth drawing attention to two other themes that have appeared before in this space, first, the distinction between forecasting and journalism and ' second, the fact that the stock market leads the economy. Journalism is, of course, the reporting of events, and, as far as economics is concerned, events tend to be confined to the official release of various statistics, such as Gross National Product and Industrial Production. The former has been declining since early this year, and the latter since August. Both are Hkely to continue to do so. What we are saying, of COUl'88, is that as far as journalism is concerned, our biggest dose of recession news still undoubtedly lies ahead of us. Forecasting, on the other hand, is a different animal. It is no trick to look ahead and suggest that forthCOming economic figures wU1 be bad. As we look further ahead and try to figure out just how bad they will be and for how long, the process becomea more subject to error. There has, moreover. been plenty of error in the past forecasting of some of the ec0nometricians about whose predictions we are hearing so much today. The most pessimistic among them may be right. Their record does not necessarily inspire confidence that such is the cue. It now becomes necessary to 'tie all of this to stock prices. We ourselves. as readers are aware. are not optimistic on this subject. Since we like to think of ourselves as rational, how- ever. one simple eventuality would make us a great deal more optimistic — i.e lower prices. If these lower prices occur. it is possible to foresee at this early stage that they be accompanied by widespread heralding of economic disaster. .. – The following. in other worda. appears to be the future outlook for those factors which will be the input for forthcoming investment decisions. That near-term economic news will be abyssmal can be regarded as a virtual certainty. The course of stock prices is less certain. Either they will refuse to decHne in the face of that poor economic news. which wU1 be a sign of great technical strength. or they wU1 move lower as the news manifests itself. which would simply be the normal expectation. What can be suggested, on the historical record. is the fact that equity prices wU1 be close to their absolute low at just about that time that nomic reporting is most pessimistic. AWTrs ANTHONY W. TABELL DELAFIELD. HARVEY. TABELL Dow-Jones Industrials (1200 p.m.) 849.22 s , P CompoSite (1200 p.m.) 121.38 Cumulative Index (11/19/81) 1099.81 .- ',', No stotement or tlJ(preUton of OJ;lInlon or any other moffer herein con1lIned '. or is fa be deemed to be, directly or indirectly, an offer or the IDI/tltallon ol.(m olfer kI buy or leU ony ucunty referred to or menhoned The moiler presented merely for the tonVlllen of Ihe subscriber While 'lie believe the IOUftfl5 of or Informo- , lion to be reliable, we In no way represent or guorontee Ihe accuracy thereof nor of the ,Iclements mude herein Any octu;m to be token by Ihe b,cdber Ihould be nil 'o.Tetbosed on own Invesllgatlon and mformallon Janney Montgomery Scott, Inc. til CI corporation, ond lis offlcer or employees, may now hove, or may lak, poslhOflS or Irode, In respect to ony leCurlTles mentioned ' Thll or ony future InUe, and luch pOsItIon may be dIfferenT from any …Ie…..' now or hereafter exprened In th' or any oTher Inue Janney MonTgomery Seo'T, Inc, wh,ch II reglltered WIth The SEC 05 on ,nvestment adVISor, may gIve od…lce to III investment advisory nd oher CUSTomers Independnfly of any SlolemenTS mode In Ihl5 or In ony other ulue Further rnformallOn on anI' seCurity mentlQl'/ed hereIn IS ovoJloble On request