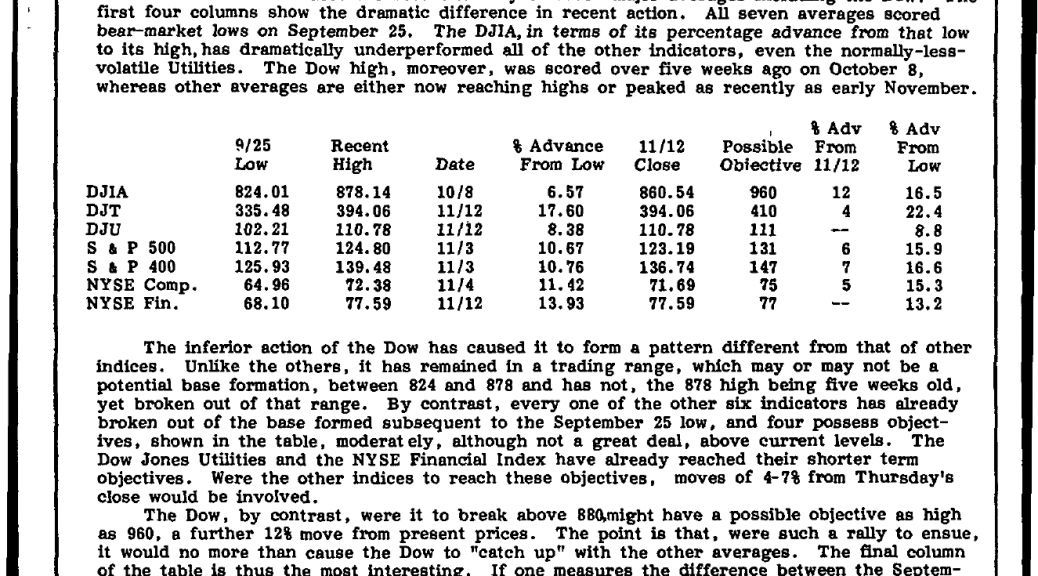 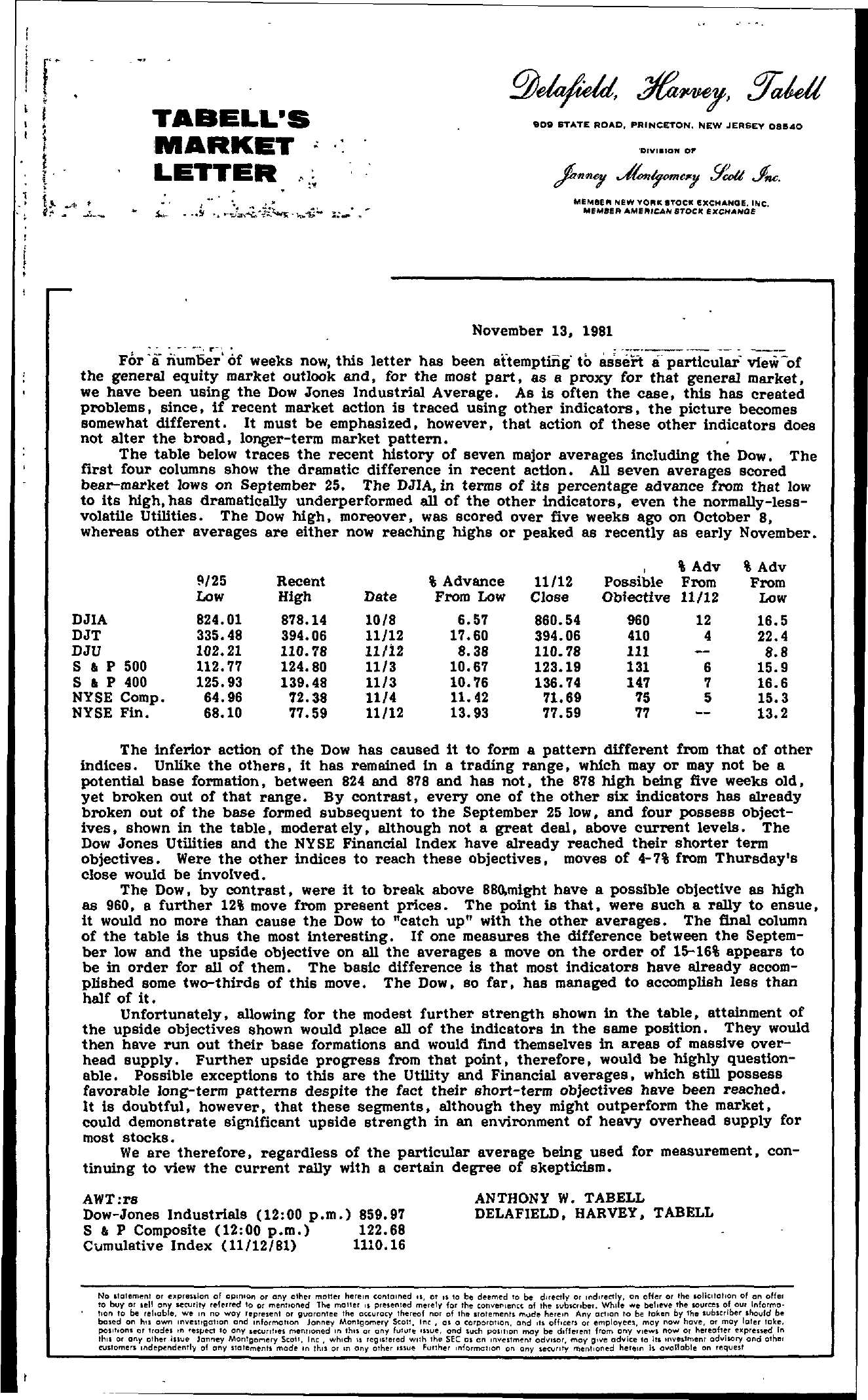 TABELL'S MARKET; LETTER . 90e STATE ROAD, PRINCETON. NEW JERSEY 08840 MEMIEiIII NEW YOfilK STOCK eXCHANGE. INC. MEMBER .'.U'CAN BTOCI( EXCHANGE – November 13, 1981 . . – – –', r-' – -.. – — – For '8 numoer' Of weeks now, this letter has been attemptiiig' to assert s' particular' view -of the general equity market outlook and, for the most psrt, as a proxy for that general market, we have been using the Dow Jones Industrial Average. As is often the case, this has created problems. since, if recent market action is traced uaing other indicators, the picture becomes somewhat different. It must be emphasized, however, that action of these other indicators does not alter the broad, longer-term market pattern. The table below traces the recent history of seven major averages including the Dow. The first four columns show the dramatic difference in recent action. All seven averages scored bear-market lows on September 25. The DJIA, in terms of its percentage advance from that low to its high. has dramatically underperformed all of the other indicators, even the normally-Iess- volatile Utilities. The Dow high, moreover. was scored over five weeks ago on October 8. whereas other averages are either now reaching highs or peaked as recently as early November. DJIA DJT DJU S P 500 S P 400 NYSE Camp. NYSE Fin. !I/25 Low 824.01 335.48 102.21 112.77 125.93 64.96 68.10 Recent High 878.14 394.06 110.78 124.80 139.48 72.38 77.59 Date 10/8 11/12 11/12 11/3 11/3 11/4 11/12 Advance From Low 6.57 17.60 8.38 10.67 10.76 11.42 13.93 11/12 Close 860.54 394.06 110.78 123.19 136.74 71.69 77.59 , Adv Possible From Objective 11/12 960 12 410 4 111 131 6 147 7 75 5 77 Adv From Low 16.5 22.4 8.8 15.9 16.6 15.3 13.2 The inferior action of the Dow has caused it to form a pattern different from that of other indices. Unlike the others. it has remained in a trading range. which mayor may not be a potential base formation. between 824 and 878 and has not. the 878 high being five weeks old, yet broken out of that range. By contrast. every one of the other six indicators has already broken out of the base formed subsequent to the September 25 low, and four poasess Objectives. shown in the table, moderat ely. although not a great deal. above current levels. The Dow Jones Utilities and the NYSE Financial Index have already reached their shorter term objectives. Were the other indices to reach these objectives, moves of 4-7 from Thursday's close would be involved. The Dow, by contrast, were it to break above 88O,might have a possible objective as high as 960. a further 12 move from present prices. The point is that, were such a rally to ensue. it would no more than cause the Dow to catch up with the other averages. The final column of the table is thus the most interesting. If one measures the difference between the Septem- ber low and the upside objective on all the averages a move on the order of 15-16 appears to be in order for all of them. The basic difference is that most indicators have already accomplished some two-thirds of this move. The Dow. so far, has managed to accomplish less than half of it. Unfortunately. allowing for the modest further strength shown in the table, attainment of the upside objectives shown would place all of the indicators in the same position. They would then have run out their base formations and would flnd themselves in areas of massive over- head supply. Further upside progress from that point. therefore. would be highly questionable. Possible exceptions to this are the Utility and Financial averages. which still possess favorable long-term patterns despite the fact their short-term objectives have been reaChed. It is doubtful, however. that these segments, although they might outperform the market, could demonstrate significant upside strength in an environment of heavy overhead supply for most stocks. We are therefore. regardless of the psrticular average being used for measurement, con- tinuing to view the current rally with a certain degree of skepticism. AWTrs Dow-Jones Industrials (1200 p.m.) 859.97 S P Composite (1200 p.m.) 122.68 Cumulative Index (11/12/81) 1110.16 ANTHONY W. TABELL DELAFIELD, HARVEY, TABELL No cltlment or I!xprenion of Optnl(Irl or any oihtH moiler herein COr'llolned u, or to be deemed 10 be directly or Indirectly on offer or the soliCitation of on offel to buy 01 lell any, security referred 10 or mentioned lhe moiler 15 presented melely for the convel'lenc(. of the wbnber. Whl e e believe the sources of our Informo han 10 be rehab e, we m no way represent or gvoronlee the occurocy thereof nor of Ihe stotements mude herein Any action to be token by 1he subscriber should be based on hu own Investigation and information Janney Montgomery Scali, Inc, os a corporollon, and IU officers or employee1, may now have, or may later toke, ''\11PDtloni OT ,rodes In respect 10 any securities menTioned In Inl or any fvlule Inue, ond l!,leh pOSihon may be dlfferen! from any views now Or hereafter expressed In or any other bsue Janney Montgonery Stott, Inc. which 15 u!gl5tered With the SEC as on Investment adVisor, moy gIVe advice 10 lIS Investment adviSOry and athll! customers Independently of any statements mode In thiS or In any other ISsue Further information on any security mentioned herem Is available on request