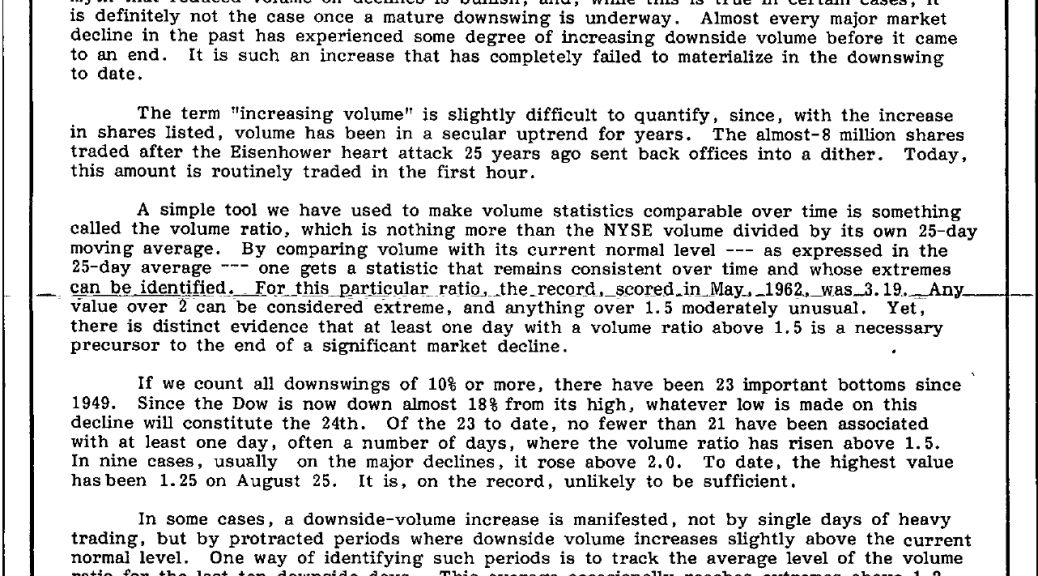 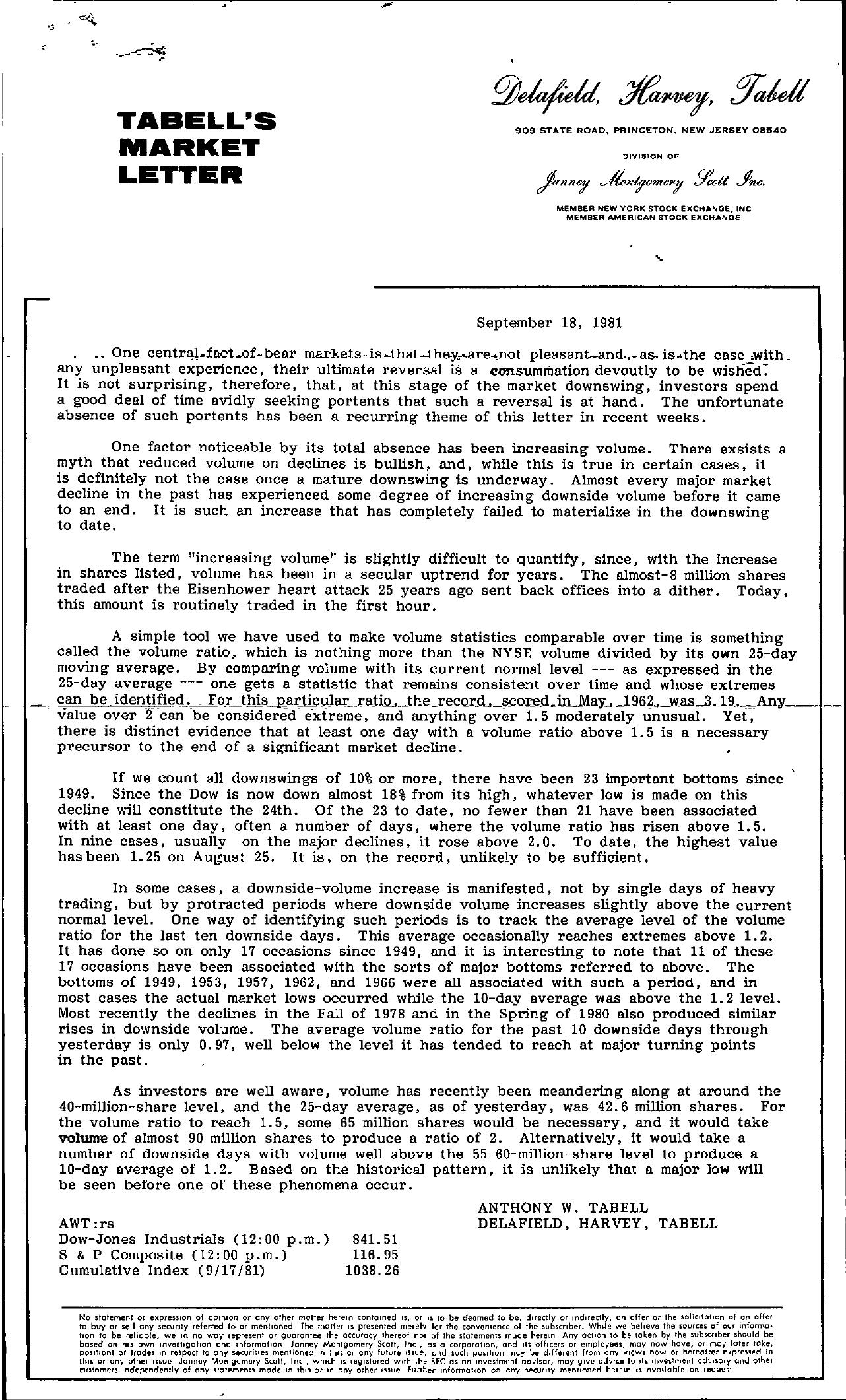 ., . TABELL'S MARKET LETTER 909 STATE ROAD, PRINCETON, NEW JERSEY 081540 DIVISION OF MEMBER New VORl(, STOCK eXCHANGE, INC MEMBER AMERICAN STOCK eXCHANOE September 18, 1981 . One central.fact.of-bear markets-isthat-the.yarenot pleasant-and.,. as- is-the case with any unpleasant experience, their ultimate reversal is a consummation devoutly fo be wished It is not surprising, therefore, that, at this stage of the market downswing, investors spend a good deal of time avidly seeking portents that such a reversal is at hand. The unfortunate absence of such portents has been a recurring theme of this letter in recent weeks. One factor noticeable by its total absence has been increasing volume. There exsists a myth that reduced volume on declines is bullish, and, while this is true in certain cases, it is definitely not the case once a mature downswing is underway. Almost every major market decline in the past has experienced some degree of increasing downside volume before it came to an end. It is such an increase that has completely failed to materialize in the downswing to date. The term increasing volume is slightly difficult to quantify, since, with the increase in shares listed, volume has been in a secular uptrend for years. The almost- 8 million shares traded after the Eisenhower heart attack 25 years ago sent back offices into a dither. Today, this amount is routinely traded in the first hour. A simple tool we have used to make volume statistics comparable over time is something called the volume ratio, which is nothing more than the NYSE volume divided by its own 25-day moving average. By comparing volume with its current normal level — as expressed in the 25-day average — one gets a statistic that remains consistent over time and whose extremes can be identified.—-.Eo.rthisJarticllJarratiQ.,therecQrd,s0r.ed.iJL..May1962.JiT.aL3.19..-Any value over 2 can be considered extreme, and anything over 1. 5 moderately unusual. Yei there is distinct evidence that at least one day with a volume ratio above 1. 5 is a necessary precursor to the end of a significant market decline. If we count all downswings of 10 or more, there have been 23 important bottoms since 1949. Since the Dow is now down almost 18 from its high, whatever low is made on this decline will constitute the 24th. Of the 23 to date, no fewer than 21 have been associated with at least one day, often a number of days, where the volume ratio has risen above 1. 5. In nine cases, usually on the major declines, it rose above 2.0. To date, the highest value has been 1.25 on August 25. It is, on the record, unlikely to be sufficient. In some cases, a downside-volume increase is manifested, not by single days of heavy trading, but by protracted periods where downside volume increases slightly above the current normal level. One way of identifying such periods is to track the average level of the volume ratio for the last ten downside days. This average occasionally reaches extremes above 1.2. It has done so on only 17 occasions since 1949, and it is interesting to note that 11 of these 17 occasions have been associated with the sorts of major bottoms referred to above. The bottoms of 1949, 1953, 1957, 1962, and 1966 were all associated with such a period, and in most cases the actual market lows occurred while the 10-day average was above the 1. 2 level. Most recently the declines in the Fall of 1978 and in the Spring of 1980 also produced similar rises in downside volume. The average volume ratio for the past 10 downside days through yesterday is only 0.97, well below the level it has tended to reach at major turning points in the past. As investors are well aware, volume has recently been meandering along at around the 40-million-share level, and the 25-day average, as of yesterday, was 42.6 million shares. For the volume ratio to reach 1. 5, some 65 million shares would be necessary, and it would take volume of almost 90 million shares to produce a ratio of 2. Alternatively, it would take a number of downside days with volume well above the 55-60-million-share level to produce a 10-day average of 1. 2. Based on the historical pattern, it is unlikely that a major low will be seen before one of these phenomena occur. AWTrs Dow-Jones Industrials (12 00 p. m.) S & P Composite (1200 p.m.) Cumulative Index (9/17/81) 841. 51 116.95 1038.26 ANTHONY W. TABELL DELAFIELD, HARVEY, TAB ELL No statement or expression of opinion or (lny other motter herein contOlned IS, or 15 10 be deemed to be, directly or indirectly, on offer or Ihe sol1cllatlon of on offer to buy or sell any security referri!'d to or mentioned The molter IS presented merely for the convemenCE of Ihe subscrrber. While we believe the sources of aUf Informa- tion to be reliable, we In no way represent or guarantee the accuracy thereof nor of the statements mude herein Any action to be taken by the subcrlber should be based on h own investigation and Information Janney Montgomery 5011, Inc, as a corporation, and liS officers or employees, may now have, or may later toke, POSitions or trades In respect to any securilles menl10ned In thiS or any future Issue, and such position may be different from any views now or hereofter e)'pressed In thiS or any other Issue Janney Montgomery 5011, Inc, which IS registered With the SEC as an Investment advisor, may give adVice 10 lis Investment odvl!.ofY and othel Ctlstomer Independently of any slotements mode In Ihls or In any other Issue further Information on any seCtlflly menhoned herein IS available on rcquest