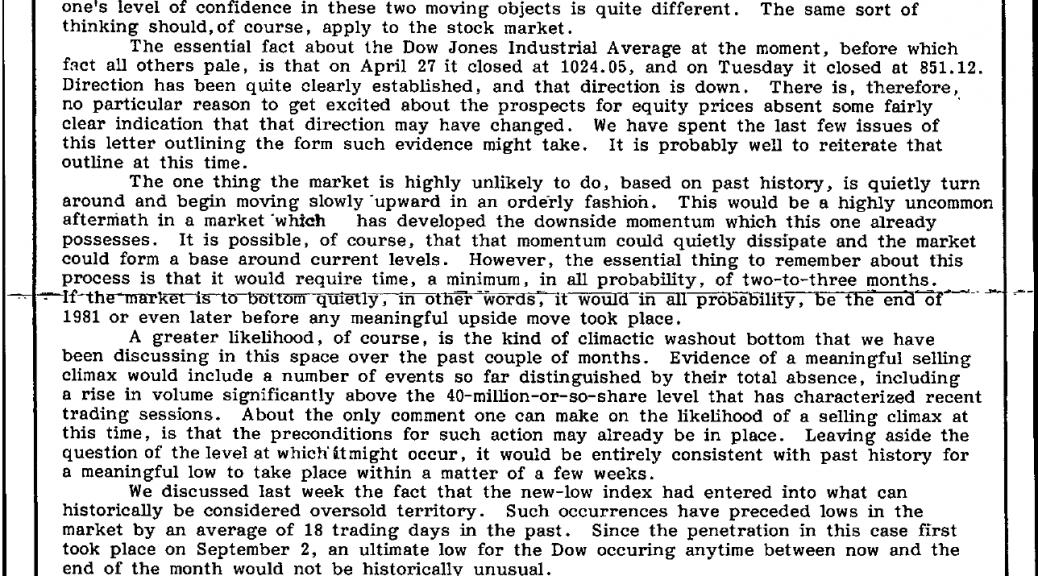 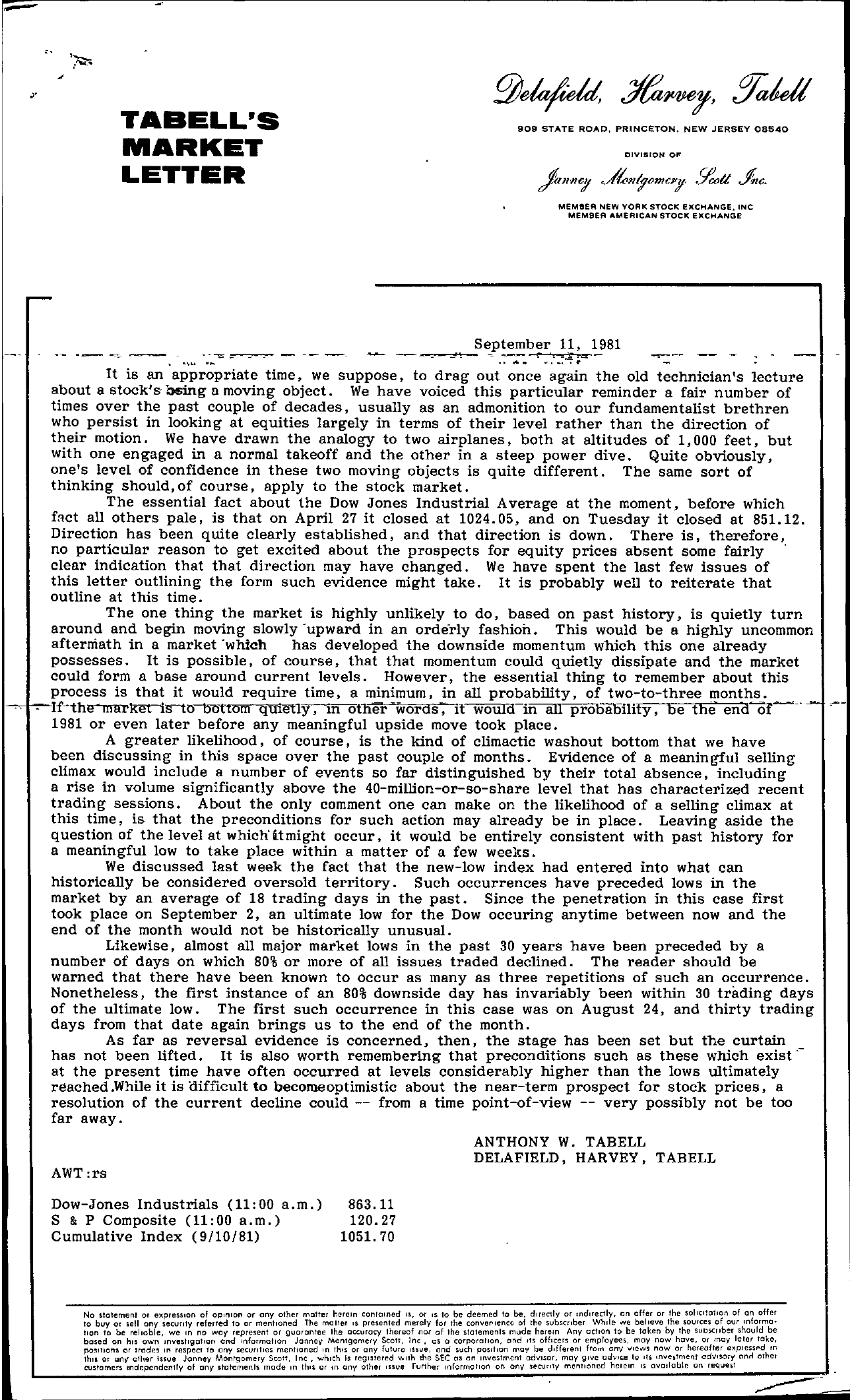 – TABELL'S MARKET LETTER 909 STATE ROAD, PRINCETON. NEW JERSEY 08540 DIVISION OF MEM8ER NEW VORK STOCK EXCHANGE. INC MEMSER AMERICAN STOCK EXCHANGE -,— – – … – It is an appropriate time, we suppose, to drag out once again the old technician's lecture about a stock's' b6ing a moving object. We have voiced this particular reminder a fair number of times over the past couple of decades, usually as an admonition to our fundamentalist brethren who persist in looking at equities largely in terms of their level rather than the direction of their motion. We have drawn the analogy to two airplanes, both at altitudes of 1,000 feet, but with one engaged in a normal takeoff and the other in a steep power dive. Quite obviously, one's level of confidence in these two moving objects is quite different. The same sort of thinking should, of course, apply to the stock market. The essential fact about the Dow Jones Industrial Average at the moment, before which flct all others pale, is that on April 27 it closed at 1024.05, and on Tuesday it closed at 851.12. Direction has been quite clearly established, and that direction is down. There is, therefore, no particular reason to get excited about the prospects for equity prices absent some fairly , clear indication that that direction may have changed. We have spent the last few issues of this letter outlining the form such evidence might take. It is probably well to reiterate that outline at this time. The one thing the market is highly unlikely to do, based on past history, is quietly turn around and begin moving slowly 'upward in an orde'rly fashion. This would be a highly uncommon aftermath in a market 'which has developed the downside momentum which this one already possesses. It is possible, of course, that that momentum could quietly dissipate and the market could form a base around current levels. However, the essential thing to remember about this process is that it would require time, a num ,. all prbility, of-.!.o-to-three months. , -,-, –If-thelrrark-m-tstolmtlom qUIetly, In otlier woras, It wouIa maIl prooaolhe the enaOf 1981 or even later before any meaningful upside move took place. A greater likelihood, of course, is the kind of climactic washout bottom that we have been discussing in this space over the past couple of months. Evidence of a meaningful selling climax would include a number of events so far distinguished by their total absence, including a rise in volume significantly above the 40-million-or-so-share level that has characterized recent trading sessions. About the only comment one can make on the likelihood of a selling climax at this time, is that the preconditions for such action may already be in place. Leaving aside the question of the level at which'Umight occur, it would be entirely consistent with past history for a meaningful low to take place within a matter of a few weeks. We discussed last week the fact that the new-low index had entered into what can historically be considered oversold territory. Such occurrences have preceded lows in the market by an average of 18 trading days in the past. Since the penetration in this case first took place on September 2, an ultimate low for the Dow occuring anytime between now and the end of the month would not be histOrically unusual. Likewise, almost all major market lows in the past 30 years have been preceded by a number of days on which 80 or more of all issues traded declined. The reader should be warned that there have been known to occur as many as three repetitions of such an occurrence. Nonetheless, the first instance of an 80 downside day has invariably been within 30 trading days of the ultimate low. The first such occurrence in this case was on August 24, and thirty trading days from that date again brings us to the end of the month. As far as reversal evidence is concerned, then, the stage has been set but the curtain has not been lifted. It is also worth remembering that preconditions such as these which exist ,at the present time have often occurred at levels considerably higher than the lows ultimately reached.While it is difficult to becomeoptimistic about the near-term prospect for stock prices, a resolution of the current decline could — from a time point-of-view — very possibly not be too far away. AWT rs ANTHONY W. TABELL DELAFIELD, HARVEY, TABELL Dow-Jones Industrials (1100 a.m.) 863.11 S & P Composite (11 00 a. m. ) 120.27 Cumulative Index (9/10/81) 1051. 70 No statement or expression of OPiniOn or any other matter herein contOined 1, or IS to be deemed to be, directly or Indirectly, on offer or the sollcllahon 01 on offer to buy or ,ell any security referred 10 or mentioned The mailer IS presented merely for the convef'U!nCfi 01 the subscrober Whde JIe believe the sources of our mformo lion 10 be reliable, we m no way represent or guorantce the accuracy thereof nor of Ihe slalemenJs mude herem Any acllon to be taken by the suoscnber should be based on hiS own mvestilatlon and Information Janney Montgomery Scoll, Inc, as a corporallon, and ,ts officers or employees, may now have, or may later lake, poSitions or trades m respect to any securities mentioned HI Ih,s or any fulure Issue, and such position may be different from any VICS now or hereafter exprcss..d 10 thn or any other Issue Janney Montgomery Sott, Inc. which Is reglslered ,th Ihe SEC as on tnvestment adVisor, may gl….e ad….lce 10 Its Investment adVisory ann olhel C'Ustomer Independently of any statements mode, thiS or m any other ISSlJe Further Informotlon on any seOJrlty mentioned herein IS avaIlable on requeSI