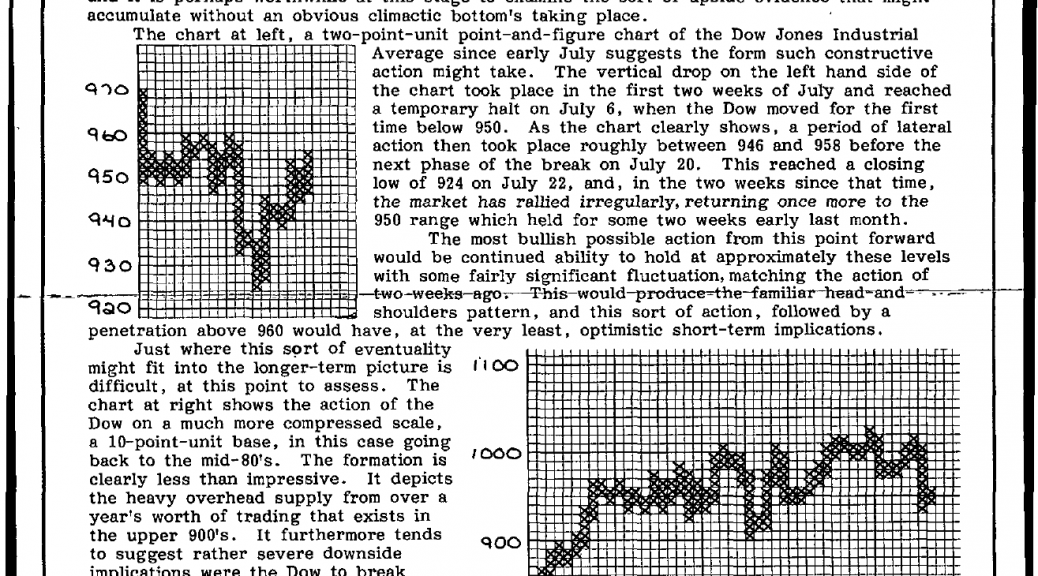 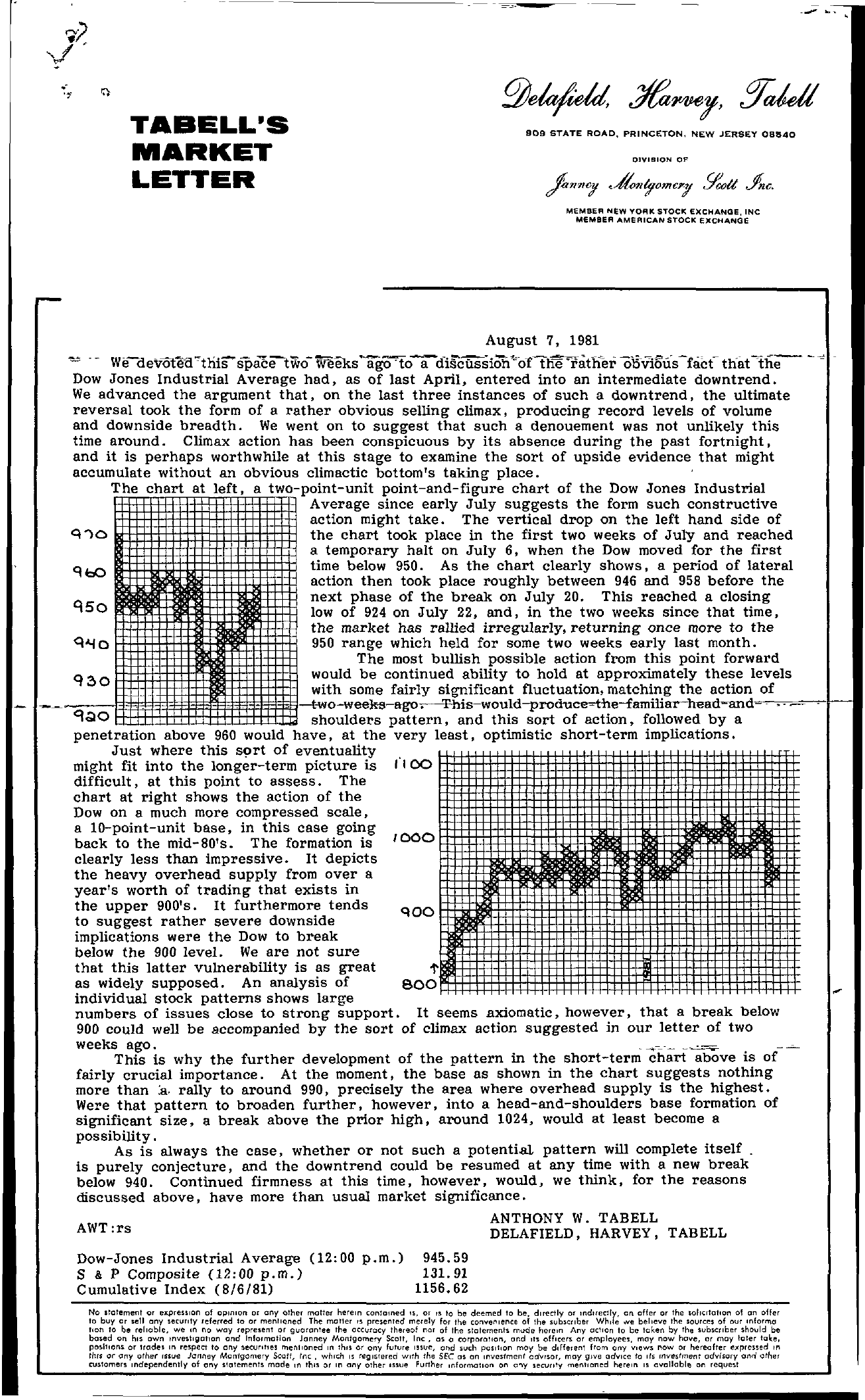 .. TABELL'S MARKET LETTER 909 STATE ROAD, PRINCETON, NEW JERSEY 081540 OIVISION OF MEMBER N!W YORK STOCK EXCHANGE, INC MEMBER AMERICAN STOCK EXCHANGE August 7, 1981 — We-de\Toten t1iis spacetwo- weeksago -toadlcussiOho(tl1e'rather oi5V-i5us-f9. tnat'the – Dow Jones Industrial Average had, as of last April, entered into an intermediate downtrend. We advanced the argument that, on the last three instances of such a downtrend, the ultimate reversal took the form of a rather obvious selling climax, producing record levels of volume and downside breadth. We went on to suggest that such a denouement was not unlikely this time around. Climax action has been conspicuous by its absence during the past fortnight, and it is perhaps worthwhile at this stage to examine the sort of upside evidence that might accumUlate without an obvious climactic bottom's taking place. The chart at a two-point-unit point-and-figure chart of the Dow Jones Industrial Average since early July suggests the form such constructive action might take. The vertical drop on the left hand side of the chart took place in the first two weeks of July and reached a temporary halt on July 6, when the Dow moved for the first time below 950. As the chart clearly shows, a period of lateral action then took place roughly between 946 and 958 before the 'ISo next phase of the break on July 20. This reached a closing low of 924 on July 22, and, in the two weeks since that time, the market has rallied irregularly, returning once more to the 950 range which held for some two weeks early last month. The most bullish possible action from this point forward would be continued ability to hold at approximately these levels with some fairly fluctuation, the action of ';'0 shoulders pattern, and this sort of action, followed by a penetration above 960 would have, at the very least, optimistic short-term implications. Just where this srt of eventuality difficult, at this point to assess. The chart at right shows the action of the Dow on a much more compressed scale, a 10-point-unit base, in this case going back to the mid-80's. The formation is 1000 the heavy overhead supply from over a year's worth of trading that exists in the upper 900's. It furthermore tends to suggest rather severe downside qOO implications were the Dow to break below the 900 level. We are not sure that this latter vulnerability is as great as widely supposed. An analysis of individual stock patterns shows large numbers of issues close to strong support. It seems axiomatic, however, that a break below 900 could well be accompanied by the sort of climax action suggested in our letter of two weeks ago. – This is why the further development of the pattern in the short-term chart above is of fairly crucial importance. At the moment, the base as shown in the chart suggeats nothing more than a, rally to around 990, precisely the area where overhead supply is the highest. Were that pattern to broaden further, however, into a head-and-shoulders base formation of Significant size, a break above the prior high, around 1024, would at least become a possibility. As is always the case, whether or not such a potential pattern will complete itself is purely conjecture, and the downtrend could be resumed at any time with a new break below 940. Continued firmness at this time, however, would, we think, for the reasons discussed above, have more than usual market significance. AWTrs ANTHONY W. TAB ELL DELAFIELD, HARVEY, TAB ELL Dow-Jones Industrial Average (1200 p.m.) 945.59 S & P Composite (1200 p.m.) 131. 91 Cumulative Index (8/6/81) 1156.62 No stalement or expression of opInion or any other moffer herein contamed 'S, or IS 10 be deemed 10 be, directly or mdlreC1tr,' on offer or Ihe ,ollcllollon of on offer 10 buy or sell ony security referred 1o or mentioned The moiler IS presented merely for the convenience of the subscriber Wh, e we believe tke sources of our mfor!T\a lion to be relloble, we 11'1 no way represent or guarantee the accuracy thereof nor of the statement mude herein Any action to be token by the subscriber should be hosed 01'1 hl own Investlgahon and Information Janney Montgomery Scott, Inc, as a corporation, ond Its officers or employees, may now ho'e, or may later lake, poslllons or Hodes 11'1 respeo;t loony securities mentioned In thiS or any future ISsue, and such pOSitIOn may be different from any Views now or hereafter expressed In thr5 or any other 15sue Janney Montgomery Seem, Inc, whICh IS registered With the SfC as on Invostment odvlsor, may gIve adVice to liS II1vestment advisory and othef customers Independently of ony statements mode ,n thiS or In any other Issue Further mformotlon on O'ly iiecuflty mentioned herem IS avoUable on request