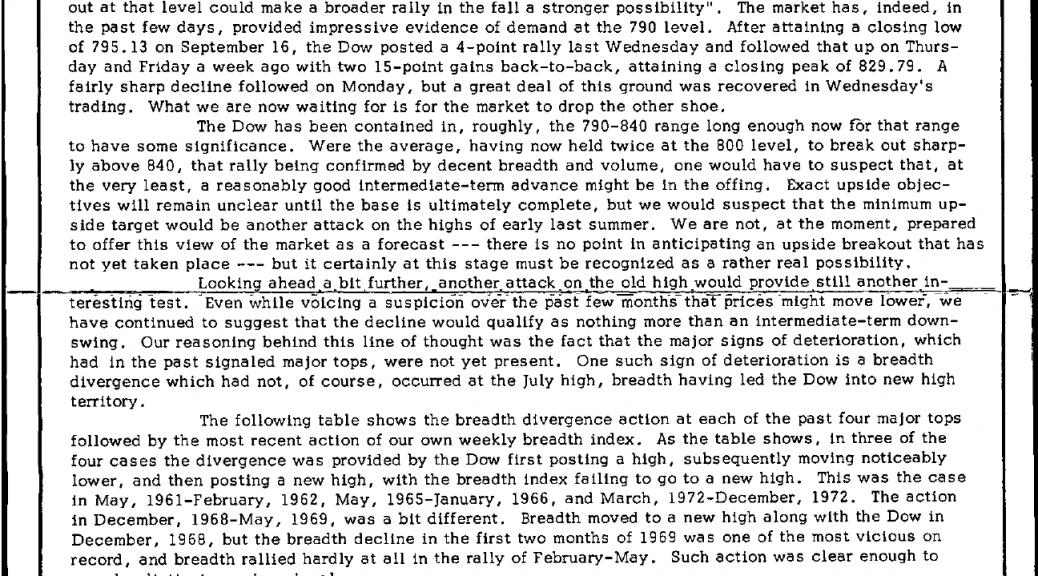 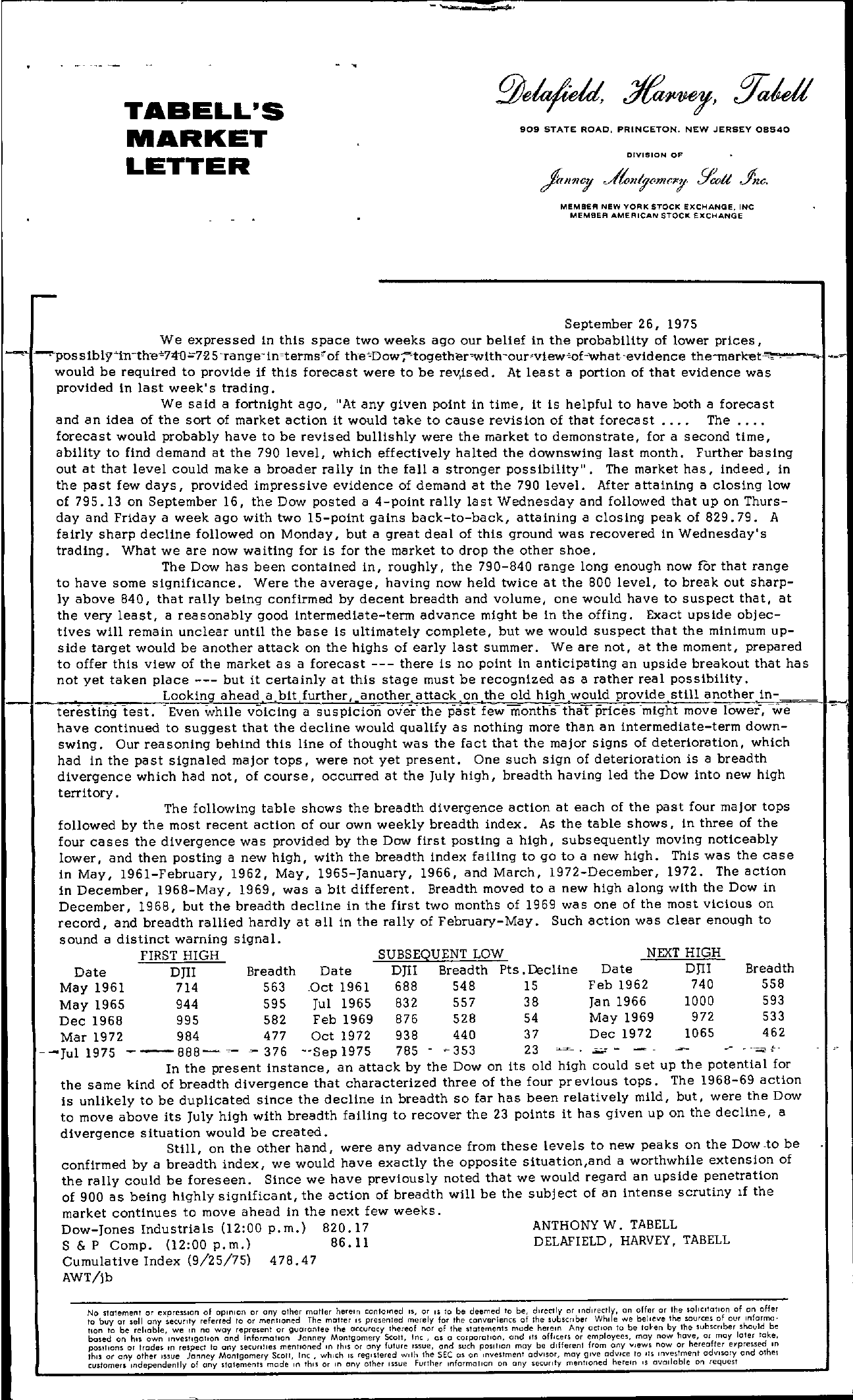 TABELL'S MARKET LETTER – .e – – t., 909 STATE ROAD, PRINCETON. NEW JERSEY 08540 DIVISION OF MEMBER NEW VORK STOCK EXCHANGE, INC MEMBER AMERICAN STOCK EXCHANGE September 26, 1975 We expressed in this space two weeks ago our belief in the probability of lower prices, 'posstbly'tn-th-e74il7Q5-range-in-terms'of theDow;together-with-our'view'of-what-evidence the–market-'….–.. – would be required to provide if this forecast were to be rev,ised. At least a portion of that evidence was provided in last week's trading. We said a fortnight ago, At any gtven point in time, it is helpful to have both a forecast and an idea of the sort of market action it would take to cause revision of that forecast…. The …. forecast would probably have to be revised bullishly were the market to demonstrate, for a second time, ability to find demand at the 790 level, which effectively halted the downswing last month. Further basing out at that level could make a broader rally in the fall a stronger possibility. The market has, indeed, in the past few days, provided impressive evidence of demand at the 790 level. After attaining a closing low of 795.13 on September 16, the Dow posted a 4-point rally last Wednesday and followed that up on Thursday and Friday a week ago with two IS-point gains back-to-back, attaining a closing peak of 829.79. A fairly sharp decline followed on Monday, but a great deal of this ground was recovered in Wednesday's trading. What we are now wa iting for is for the market to drop the other shoe. The Dow has been contained in, roughly, the 790-840 range long enough now fOr that range to have some significance. Were the average, having now held twice at the 800 level, to break out sharply above 840, that rally being confirmed by decent breadth and volume, one would have to suspect that, at the very least, a reasonably good intermediate-term advance might be in the offing. Exact upside objectives will remain unclear until the base is ultimately complete, but we would suspect that the minimum upside target would be another attack on the highs of early last summer. We are not, at the moment, prepared to offer this view of the market as a forecast — there is no point in anticipating an upside breakout that has not yet taken place — but it certainly at this stage must be recognized as a rather real possibility. —I–te-restirig-te-s-t.-LEovoekninwghiahleeavdOiaCbiintgfausrtUhsePr,i-canioo-tnhoevr-eartt-acthkeopna-tshtefoelwdmh0ingthhwstohuladtpprroiv2cidees-smtiillg7hantomtohveerlionw-ei,w-e–I have continued to suggest that the decline would qualify as nothing more than an intermediate-term down- swing. Our reasoning behind this line of thought was the fact that the major signs of deterioration, which had in the past signaled major tops, were not yet present. One such sign of deterioration is a breadth divergence which had not, of course, occurred at the July high, breadth having led the Dow into new high territory . The following table shows the breadth divergence action at each of the past four major tops followed by the most recent action of our own weekly breadth index. As the table shows, in three of the four cases the divergence was provided by the Dow first posting a high, subsequently moving noticeably lower, and then posting a new high, with the breadth index failing to go to a new high. This was the case in May, 1961-February, 1962, May, 1965-January, 1966, and March, 1972-December, 1972. The action in December, 1968-May, 1969, was a bit different. Breadth moved to a new high along with the Dow in December, 1968, but the breadth decline in the first two months of 1969 was one of the most vicious on record, and breadth rallied hardly at all in the rally of February-May. Such action was clear enough to sound a distinct warning signal. FIRST HIGH SUBSEQUENT LOW NEXT HIGH Date DJII Breadth Date DJII Breadth Pts. Decline Date DJII Breadth May 1961 714 563 .oct 1961 688 548 15 Feb 1962 740 558 May 1965 944 595 Jul 1965 832 557 38 Jan 1966 1000 593 Dec 1968 995 582 Feb 1969 876 528 54 May 1969 972 533 Mar 1972 – -Jul 1975 – 984 477 Oct 1972 938 440 888- – 376 –Sep 1975 785 – 353 37 Dec 1972 23 . 1065 462 – – f- In the present instance, an attack by the Dow on its old high could set up the potential for the same kind of breadth divergence that characterized three of the four pr evious tops. The 1968-69 action is unlikely to be duplicated since the decline in breadth so far has been relatively mild, but, were the Dow to move above its July high with breadth failing to recover the 23 points it has given up on the decline, a divergence situation would be created. Still, on the other hand, were any advance from these ievels to new peaks on the Dowto be confirmed by a breadth index, we would have exactly the opposite situation,and a worthwhlle extension of the rally could be foreseen. Since we have previously noted that we would regard an upside penetration of 900 as being highly significant, the action of breadth wlll be the subject of an intense scrutiny 11 the market continues to move ahead in the next few weeks. Dow-Jones Industrials (1200 p.m.) 820.17 S & P Camp. (1200 p.m.) 86.11 ANTHONY W. TABELL DELAFIELD, HARVEY, TABELL Cumulative Index (9/25/75) 478.47 AWT/jb No statement or expreulon of opinion or any other matter herein onlolned IS, or IS 10 be deemed to be, directly or ,nd,rectly, an offer or the soliCitation of an offer to buy or sell any security referred to or mentioned The mOiler IS presented merely for Ihe canverlenCE of Ihe subscriber While -He believe the sources of our InformaTIon 10 be reliable, we In no way represent or guarantee the accuracy thereof nor of the statements mude herein Any action to be toen by the subscnber should be based on hiS own Investlgolton and Informallan Janney Montgomery Scott, Inc, os a corporation, and .ts offICers or employees, may now have, or may later toke. poSitions or Irades 10 respect to cny seCUrities mentioned In Ihls or any future Issue, and such posilion may be different from any views now or hereafter elpressed In Ih,s or cny other Issue Janney Monlgomery Scorr, tnc , which IS registered wllh the SEC as on IOvestment adVisor, may give adVICe to .15 Investment odvlSQry ond olhel customers Independently of any stotements made In thiS or 10 any other Issue Further Information on any security mentioned herel() IS available on request