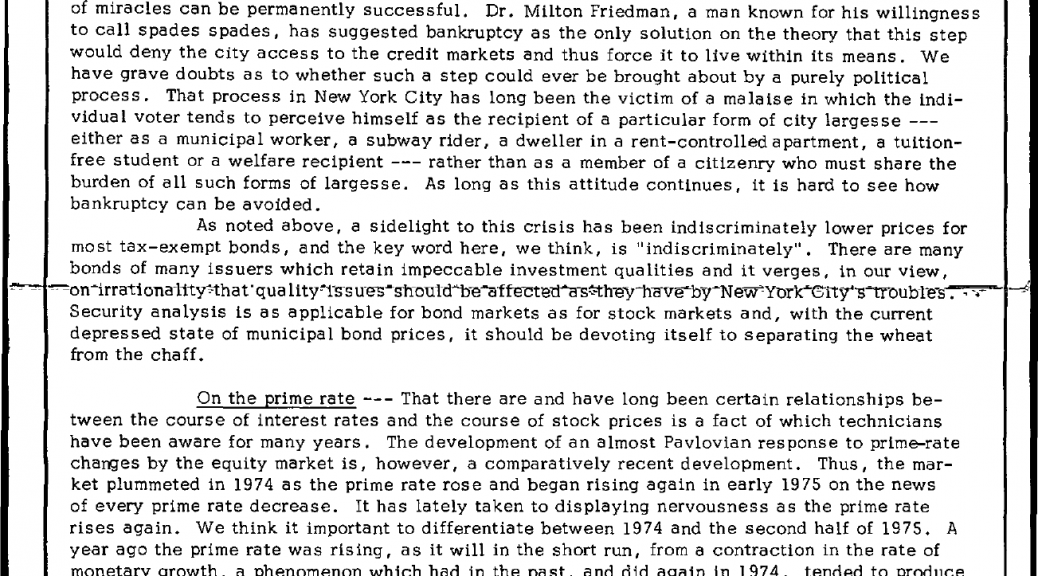 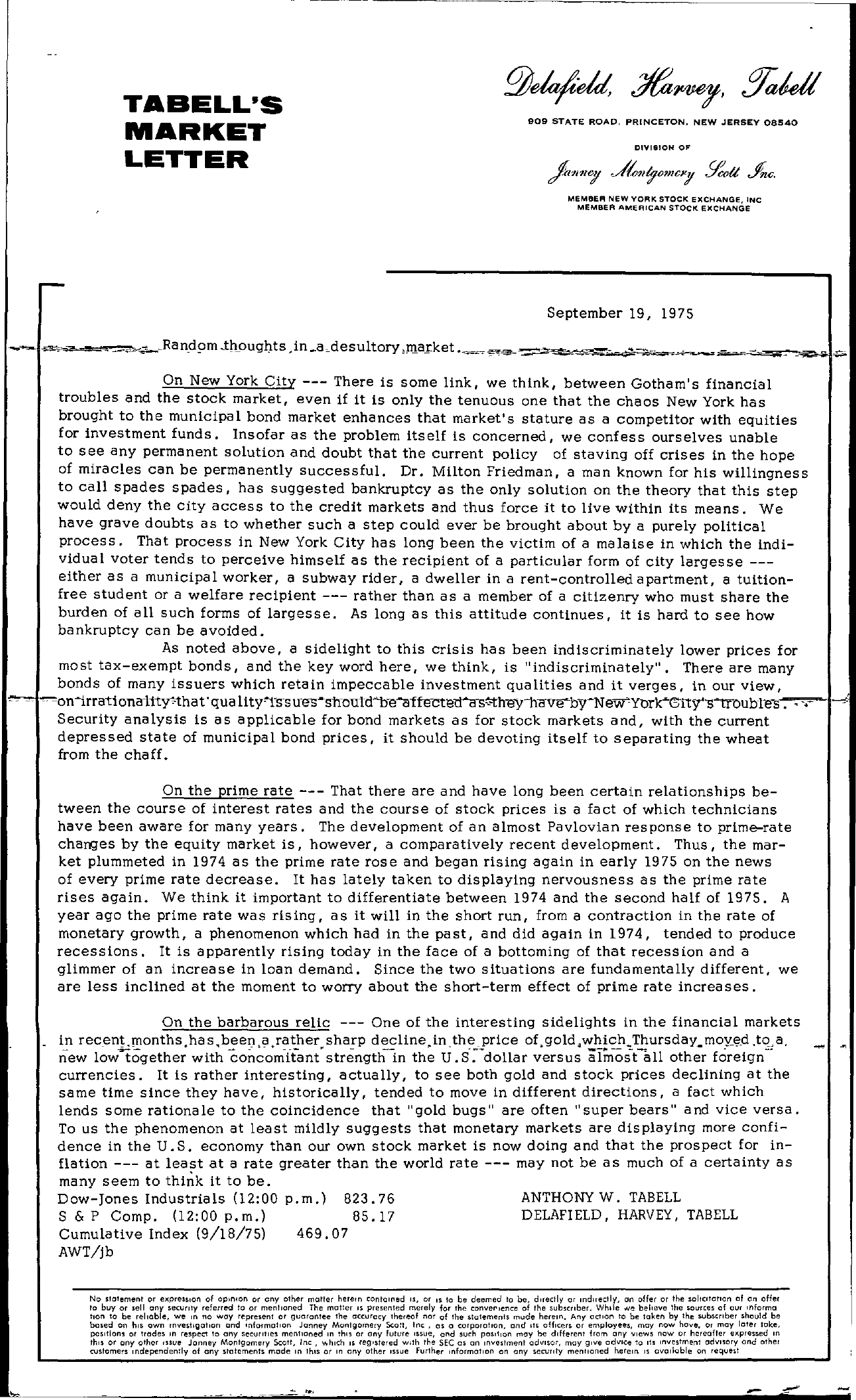 TABELL'S MARKET LETTER 909 STATE ROAD, PRINCETON, NEW JERSEY 08540 DIVISION OF' MEMBER NEW YORI( STOCK EXCHANGE, INC MEMBER AMERICAN STOCK eXCHANGE September 19, 1975 On New York City — There is some link, we think, between Gotham's financial troubles and the stock market, even if it is only the tenueus ene that the chaes New Yerk has brought to the municipal bond market enhances that market's stature as a competitor with equities for investment funds. Insofar as the problem itself is concerned, we confess ourselves unable to see any permanent selution and doubt that the current policy ef staving eff crises in the hepe of miracles can be permanently successful. Dr. Milton Friedman, a man knewn fer his willingness to call spades spades, has suggested bankruptcy as the only solution on the theory that this step would deny the city access to. the credit markets and thus force it to live within its means. We have grave doubts as to whether such a step could ever be brought about by a purely political process. That process in New York City has long been the victim of a malaise in which the individual voter tends to perceive himself as the recipient of a particular form of city largesse –either as a municipal werker, a subway rider, a dweller in a rent-controlled apartment, a tuitionfree student er a welfare recipient — rather than as a member ef a citizenry who must share the burden of all such forms of largesse. As long as this attitude continues, it is hard to see how bankruptcy can be avoided. As noted above, a sidelight to this crisis has been indiscriminately lower prices for most tax-exempt bonds, and the key werd here, we think, is indiscriminately. There are many bonds of many issuers which retain impeccable investment qualities and it verges, in eur view, I on-irratienal1ty'1hat qua lity'lS's u'e-sShoutd'heClffectetl(rstlrey-hc-vebY-NeWYorkG1tV'Strouble's. .- Security analysis is as applicable for bend markets as for steck markets and, with the current depressed state ef municipal bend prices, it sheuld be deveting itself to separating the wheat from the chaff. -! On the prime rate — That there are and have long been certain relationships between the course of interest rates and the ceurse of steck prices is a fact of which technicians have been aware for many years. The development of an almost Pavlovian res pense to prime-rate chaIl;jes by the equity market is, however, a comparatively recent development. Thus, the market plummeted in 1974 as the prime rate rose and began riSing again in early 1975 on the news ef every prime rate decrease. It has lately taken to displaying nervousness as the prime rate rises again. We think it important to differentiate between 1974 and the second half of 1975. A year ago the prime rate was rising, as it will in the short run, from a contraction in the rate of monetary growth, a phenomenon which had in the past, and did again in 1974, tended to produce recessions. It is apparently rising today in the face of a botteming ef that recession and a glimmer of an increase in lean demand. Since the two situations are fundamentally different, we are less inclined at the moment to worry about the short-term effect of prime rate increases. On the barbareus relic — One ef the interesting Sidelights in the financial markets in recent.!Ilonths.has,been,a.rather sharp decline)ntheprice ef.geld.whichThursdaymey-,d.to..a. new lowtogether with concomitant' strength-in the U .S'-dollar versus al;;05t811 other foreign'- currencies. It is rather interesting, actually, to see beth geld and stock prices declining at the same time since they have, historically, tended to move in different directions, a fact which lends SOme rationale to the coincidence that gold bugs are often super bears and vice versa. To us the phenomenon at least mildly suggests that monetary markets are displaying more cenfi- dence in the U. S. economy than our own stock market is now doing and that the prespect for in- flation — at least at a rate greater than the world rate — may net be as much of a certainty as many seem to think it to be. Dew-Jones Industrials (1200 p.m.) 823.76 ANTHONY W. TABELL S & P Cemp. (1200 p.m.) 85.17 DELAFIELD, HARVEY, TAB ELL Cumulative Index (9/18/75) 469.07 AWT/Jb No statement or expression of Opinion or any other motter herein COntained IS, or IS to be deemed to be, directly or mdneclly, on offer or the sollCltotlon of on offer to buy or sell ony secvnly referred to or mentioned The motler IS presenled merely for the converlenCE of the subscriber. While lie believe the sources of our IMorma 11011 to be reliable, we In no way represent or guarantee the accuracy thereof nor of the Slalemenls mude herem. Any octlon 10 be token by the subSCriber should be based On hiS own mvesilgotlon and 'nformat,on Janney Montgomery Seart, Inc, as a corporation, and ,IS officers or employees, may now have, or may later loke, pOSitions 01 trades In respect 10 any S!X\HllleS menl10ned In thiS or any future IHue, and such position may be different from any views now or hereafter expressed In thl or any other Issue Janney Montgomery 5coll, Inc, v.hlCh IS regIstered With the SEC as on Investment adVisor, may give odvlce to lIs Investment adVisory and other customers II'ldependently of any statements made In th,s or In any ather Issue Further Information on any security mentioned herem IS available on request