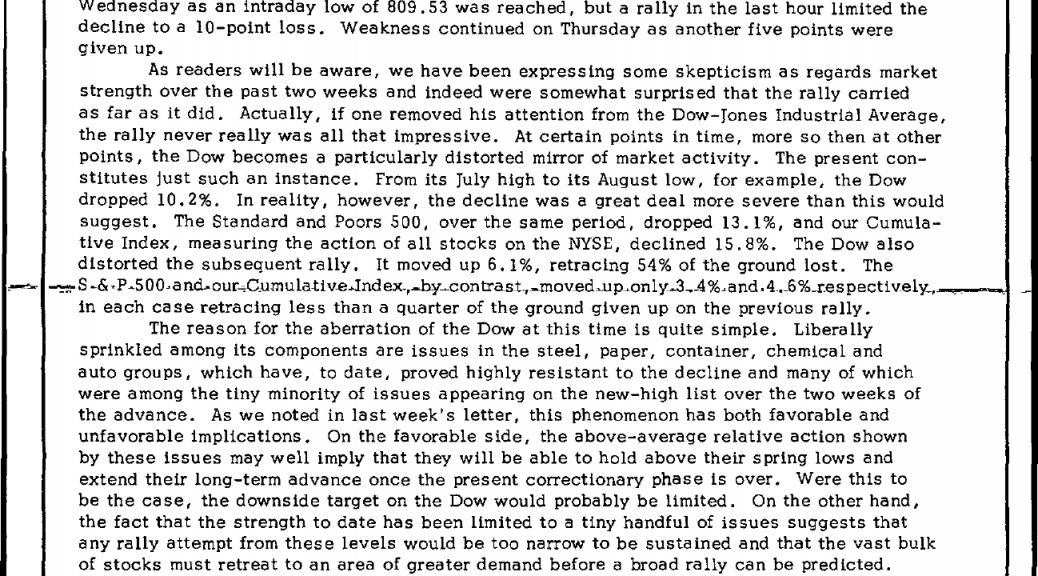 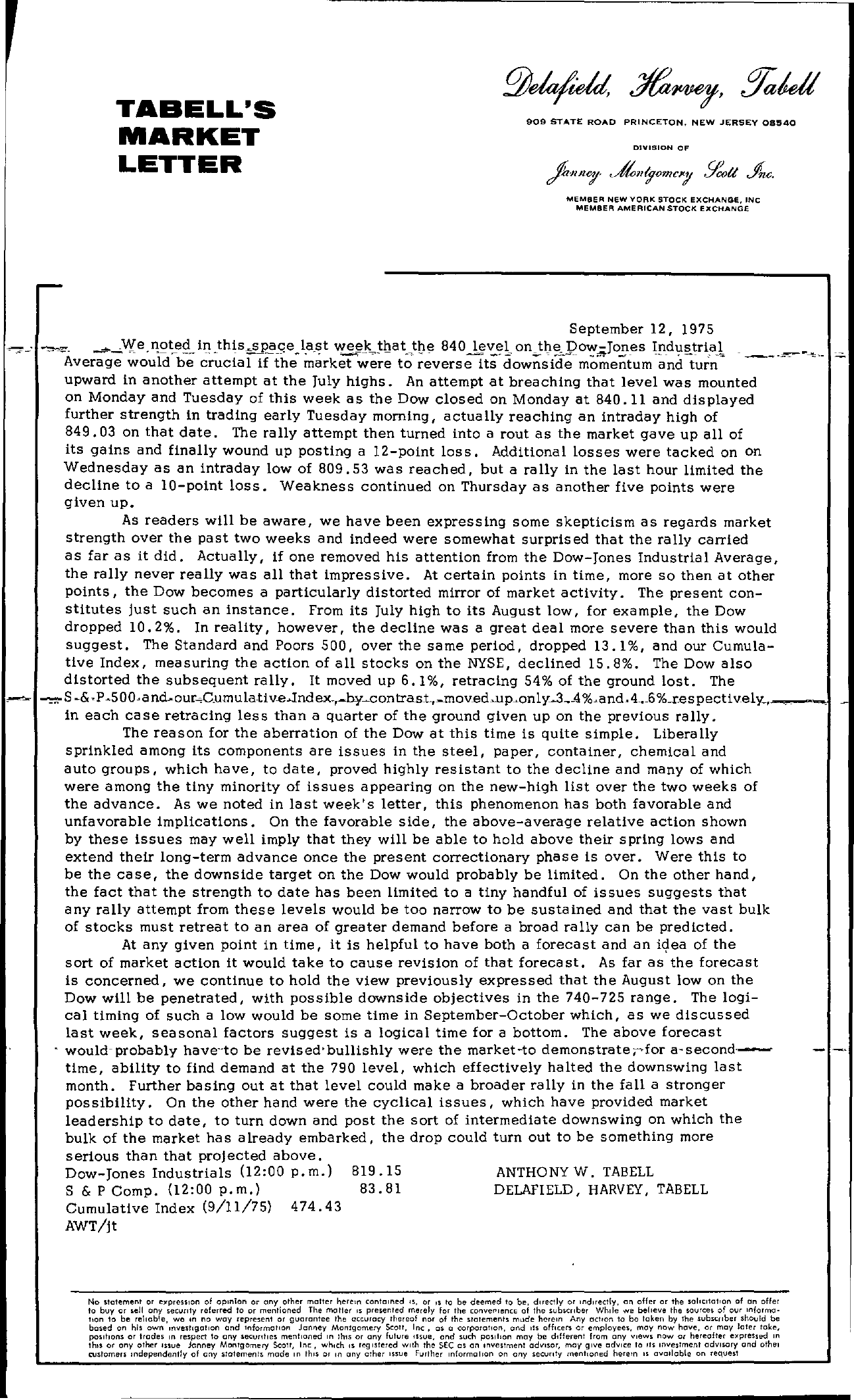 TABELL'S MARKET LETTER 909 STATE ROA.D PRINCETON, NEW JERSEY 08540 DIVISION OF MEMBER NEW YORK STOCK eXCHANGe, INC MEMBER AMERICAN STOCK eXCHANGe September 12, 1975 -,,. –. -,-,-v..re.,,!()eUn.thisd'2..ageast w1.thattDe 840ehon.!l!po.;JoEes Ind,,tr1a . . … Average would be crucial if the market were to reverse its downside momentum and turn upward in another attempt at the July highs. An attempt at breaching that level was mounted on Monday and Tuesday of this week as the Dow closed on Monday at 840.11 and displayed further strength in trading early Tuesday morning, actually reaching an intraday high of 849.03 on that date. The rally attempt then turned into a rout as the market gave up all of its gains and finally wound up posting a 12-point loss. Additional losses were tacked on on Wednesday as an intraday low of 809.53 was reached, but a rally in the last hour limited the decline to a 10-point loss. Weakness continued on Thursday as another five points were given up. As readers will be aware, we have been expressing some skepticism as regards market strength over the past two weeks and indeed were somewhat surprised that the rally carried as far as it did. Actually, if one removed his attention from the Dow-Jones Industrial Average, the rally never really was all that impressive. At certain points in time, more so then at other pOints, the Dow becomes a particularly distorted mirror of market activity. The present con- stitutes just such an instance. From its July high to its August low, for example, the Dow dropped 10.2. In reality, however, the decline was a great deal more severe than this would suggest. The Standard and Poors 500, over the same period, dropped 13.1 , and our Cumula- tive Index, measuring the action of all stocks on the NYSE, declined 15 8. The Dow also distorted the subsequent rally. It moved up 6.1 , retracing 54 of the ground lost. The . – – -,.. S -&. P.5 00. andourC.umula.ti v.e.lnd ex.,bycontras.t.,-mov.ed.uponly3 4.a nd. 4…6..r.e s pectiv.elY,1 in each case retracing less than a quarter of the ground given up on the previous rally. The reason for the aberration of the Dow at this time is quite simple. Liberally sprinkled among its components are issues in the steel, paper, container, chemical and auto groups, which have, to date, proved highly resistant to the decline and many of which were among the tiny minority of issues appearing on the new-high list over the two weeks of the advance. As we noted in last week's letter, this phenomenon has both favorable and unfavorable implications. On the favorable side, the above-average relative action shown by these issues may well imply that they will be able to hold above their spring lows and extend their long-term advance once the present correctionary phase is over. Were this to be the case, the downside target on the Dow would probably be limited. On the other hand, the fact that the strength to date has been limited to a tiny handful of issues suggests that any rally attempt from these levels would be too narrow to be sustained and that the vast bulk of stocks must retreat to an area of greater demand before a broad rally can be predicted. At any given point in time, it is helpful to have both a forecast and an igea of the sort of market action it would take to cause revision of that forecast. As far as the forecast is concerned, we continue to hold the view previously expressed that the August low on the Dow will be penetrated, with possible downside objectives in the 740-725 range. The logi- cal timing of such a low would be some time in September-October which, as we discussed last week, seasonal factors suggest is a logical time for a bottom. The above forecast would, probably haveto be reVised-bullishly were the market-to demonstrate ,for a-second- time, ability to find demand at the 790 level, which effectively halted the downswing last month. Further baSing out at that level could make a broader rally in the fall a stronger possibility. On the other hand were the cyclical issues, which have provided market leadership to date, to turn down and post the sort of intermediate downswing on which the bulk of the market has already embarked, the drop could turn out to be something more serious than that projected above. Dow-Jones Industrials (1200 p.m.) 819.15 S & P Compo (1200 p. m.) 83.81 Cumulative Index (9/11/75) 474.43 ANTHONY W. TAB ELL DELAFIELD, HARVEY, TA8ELL AWT/jt No 1-'ctement or eyprCnlOn of opinion or ony other moiler herein contamed ,. or IS to be deemed to be, directly or Indirectly, on offer or the sollcllol,on of on offer 10 buy or sell any secunty referred 10 or mentioned The matter IS presented merely for the convertlenC6 of the subcrlber Whde we believe the sources of our Informahon to be reliable, we In no way represent or guarantee the accuracy thereof nor of the 5.tatements mude herein Any achon to be taken by the !ubscnber should be based on his own investigation and information Janney Montgomery Scali, Inc, as a corporation, ond Ill. offuers or employees, may now have, or may later toke, poSitions or trades In respect to any secUrities mentioned In thiS or any future ISsue, and such poslon may be different from any views now or hereafter expressed In thiS or any other Issue Janney Montgomery ScoH, Inc, which IS registered With the SEC as an Investment adVisor, may give adVice to 11 InVestment adVISOry and othel customers 1I1dependently of any statements mode 111 thiS or In any other Issue Further Informal Ion on any security menhoned herem IS available on request