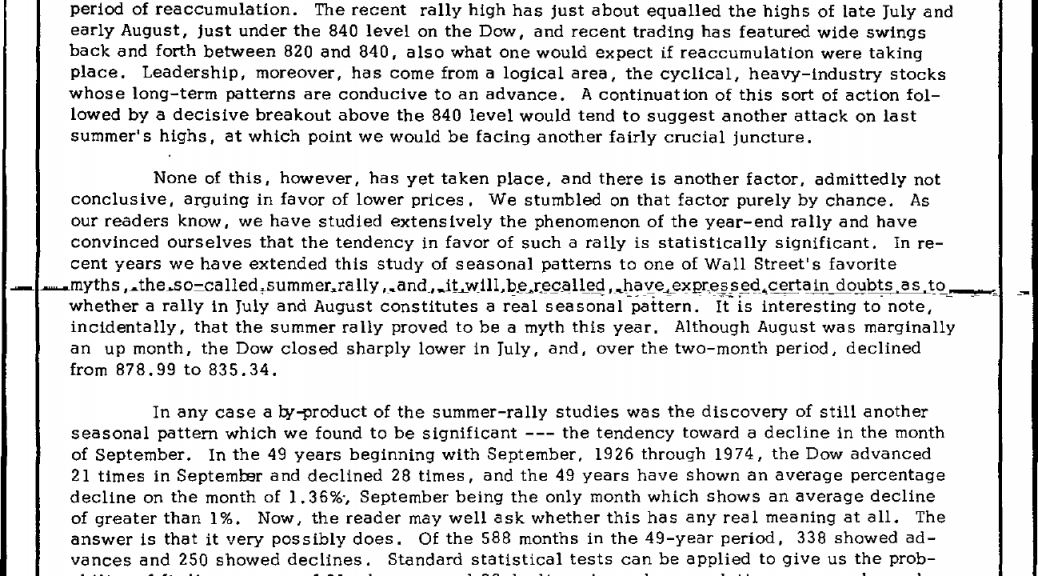 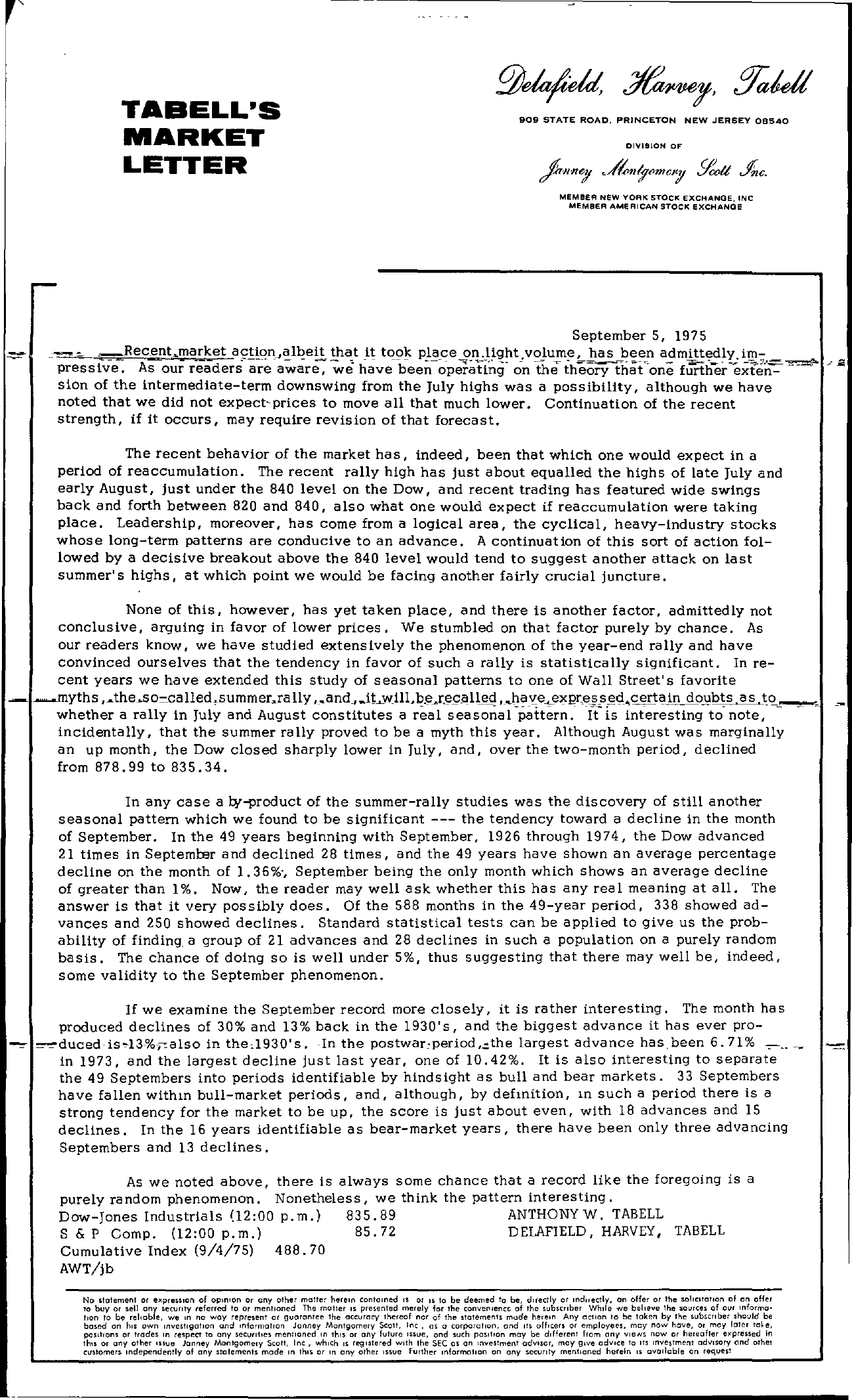 TABELL'S MARKET LETTER 909 STATE ROAD, PRINCETON NEW JERSEY 08540 DIVISION OF MEMBER NEW VORK STOCK EXCHANGE, INC MEM8ER AMERICAN STOCK eXCHANGE September 5, 1975 – Recent.market a;!!n.alleit that.it took pla.ce on.lightyolume, has been admittedly.im- ; …pressive. As our readers are aware. e have bee-opJating on the the;;Y that-'one f;;tlter -ex;- — sion of the intermediate-term downswing from the July highs was a possibility, although we have noted that we did not expect-prices to move all that much lower. Continuation of the recent strength, if it occurs, may require revision of that forecast. The recent behaVior of the market has, indeed, been that which one would expect in a period of reaccumulation. The recent rally high has just about equalled the highs of late July and early August, just under the 840 level on the Dow, and recent trading has featured wide swings back and forth between 820 and 840, also what One would expect if reaccumulation were taking place. Leadership, moreover, ha s come from a logical area, the cyclica I, heavy-industry stocks whose long-term patterns are conducive to an advance. A continuation of this sort of action followed by a decisive breakout above the 840 level would tend to suggest another attack on last summer's highs, at which pOint we would be facing another fairly crucial juncture. None of this, however, has yet taken place, and there is another factor, admittedly not conclusive, arguing in favor of lower prices. We stumbled on that factor purely by chance. As our readers know, we have studied extensively the phenomenon of the year-end rally and have convinced ourselves that the tendency in favor of such a rally is statistically significant. In recent years we have extended this study of seasonal patterns to one of Wall Street's favorite myths ,the.socalled,summer.rally ,.and,iLwl11.br-,yall L.ha\leexprel'.s,!cI.certa in doubts. as. to whether a rally in July and August constitutes a real seasoal paitern. it is interesting to note, – – incidentally, that the summer rally proved to be a myth this year. Although August was marginally an up month, the Dow closed sharply lower in July, and, over the two-month period, declined from 878.99 to 835.34. In any case a b-product of the summer-rally studies was the discovery of still another seasonal pattern which we found to be significant — the tendency toward a decline in the month of September. In the 49 years beginning with September, 1926 through 1974, the Dow advanced 21 times in September and declined 28 times, and the 49 years have shown an average percentage decline on the month of 1.36-, September being the only month which shows an average decline of greater than 1. Now, the reader may well ask whether this has any real meaning at all. The answer is that it very possibly does. Of the 588 months in the 49-year period, 338 showed advances and 250 showed declines. Standard statistical tests can be applied to give us the probability of finding, a group of 21 advances and 28 declines in such a population on a purely random basis. The chance of doing so is well under 5, thus suggesting that there may well be, indeed, some validity to the September phenomenon. If we examine the September record more closely, it is rather interesting. The month ha s produced declines of 30 and 13 back in the 1930's, and the biggest advance it has ever pro,..-ducedis-13,–also in the,1930's. In the postwaL-period,.,the largest advance has,been 6. 71 .. in 1973, and the largest decline just last year, one of 10.42. It is also interesting to separate the 49 Septembers into periods identifiable by hindsight as bull and bear markets. 33 Septembers have fallen withm bull-market periods, and, although, by defmition, m such a period there is a strong tendency for the market to be up, the score is just about even, with 18 advances and 15 declines. In the 16 years identifiable as bear-market years, there have been only three advancing Septembers and 13 declines. As we noted above, there is always some chance that a record like the foregoing is a purely random phenomenon. Nonetheless, we think the pattern interesting. Dow-Jones Industrials (1200 p.m.) 835.89 ANTHONYW. TABELL S & P Compo (1200 p.m.) 85.72 DELAFIELD, HARVEY, TABELL Cumulative Index (9/4/75) 488.70 AWT/jb No statement or expression of opinion or ony other motter herein contOlned IS or IS to be deemed 10 be, directly or mdlrectly, on offer or the SOI'Cllollon of on offer 10 buy or sell cmy secunty referred 10 or mentioned The mOiler IS presented merely for the converlenct of the subscriber Whlle.,.,e believe the sources of our Informa tlon to be reliable, we In no way represent or guarantee the accuracy thereof nor at the stOlements mude herein Any aellan to be taken by the subSCrIber shOUld be based an hiS own Investigation and Information Janney Montgomery Scot!, Inc, as 0 corporation, and Its officers or employees, may now have, or may later tae, positions ar trades In respect to any seCUrities mentioned In thiS or any future Issue, and such posilion may be different from any VieNS now or hereafter expressed In thiS ar any other Issue Janney Montgomery Scoll, Inc, which IS registered With the SEC as an Investment adVisor, may give adVice to Its Investment adVisory and othel customers Independently of any statements made In thiS or In any other Issue Further mformotlon on any security mentioned herein IS aVailable on request