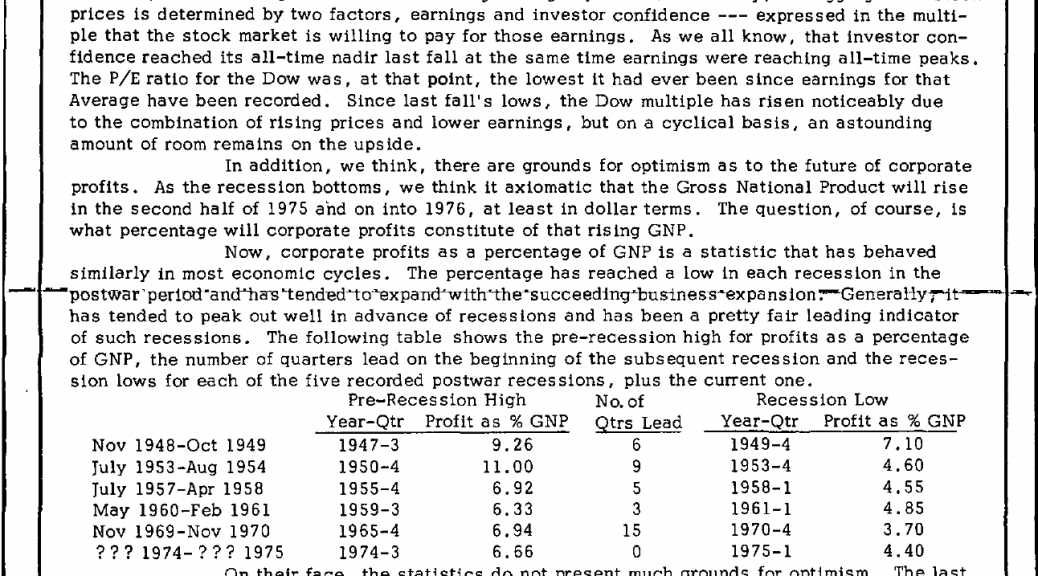 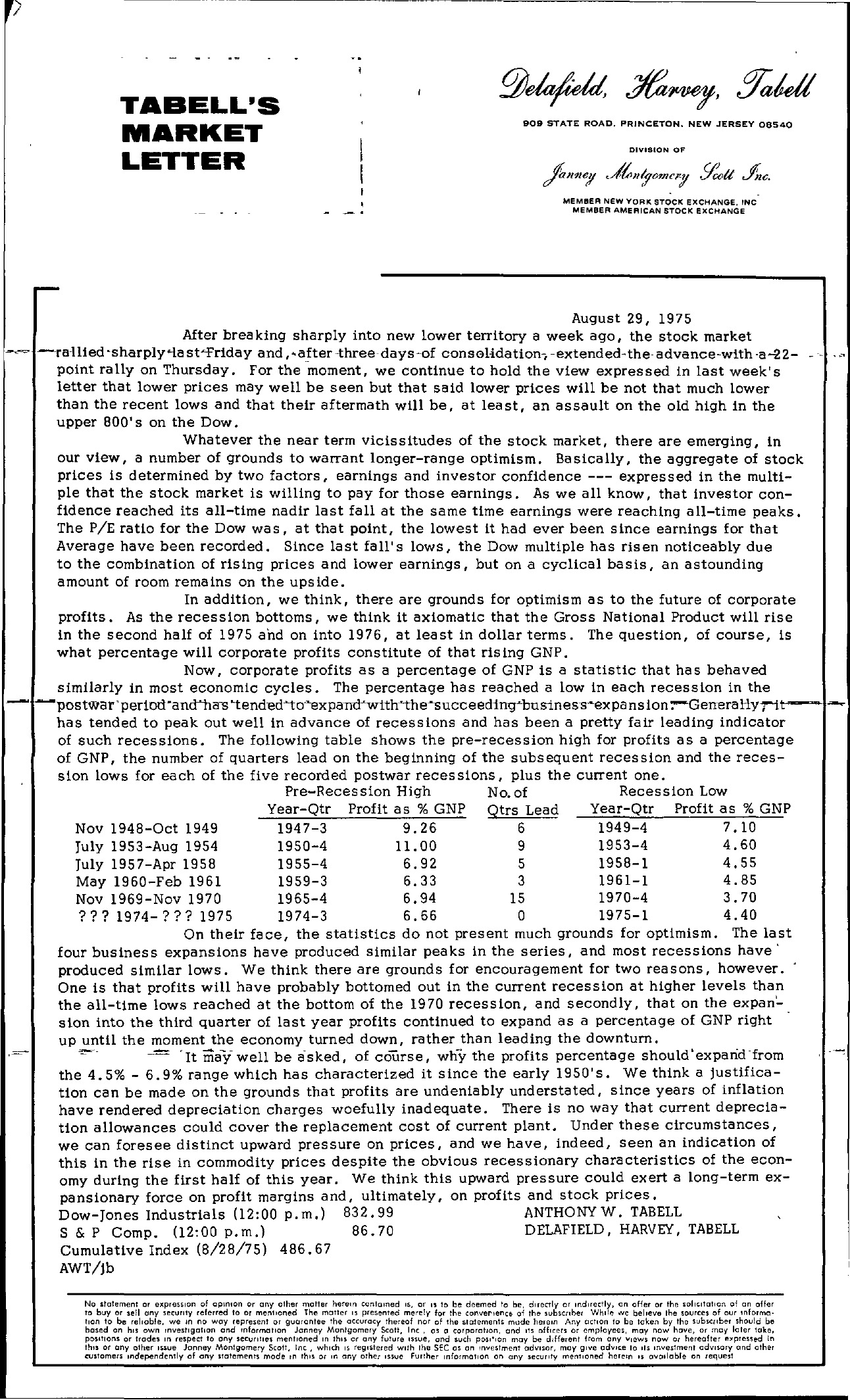 TABELL'S MARKET LETTER 909 STATE ROAD, PRINCETON. NEW JERSEY 08540 DIVISION OF MEM8ER NEW YORK STOCK EXCHANGE, INC MEMBER AMERICAN STOCK eXCHANGE August 29, 1975 Mter brea king sharply into new lower territory a week ago, the stock market -ra-llied sharply'l.a st4'riday and, -after -three-days-of consoHdation, -extended-the- advance-with -a-2 2- ..' point rally on Thursday. For the -moment, we continue to hold the view expressed in last week's letter that lower prices may well be seen but that said lower prices will be not that much lower than the recent lows and that their aftermath will be, at least, an assault on the old high in the upper 800' s on the Dow. Whatever the near term vicissitudes of the stock market, there are emerging, in our view, a number of grounds to warrant longer-range optimism. Basically, the aggregate of stock prices is determined by two factors, earnings and investor confidence — expressed in the multi- ple that the stock market is willing to pay for those earnings. As we all know, that investor con- fidence reached its all-time nadir last fall at the same time earnings were reaching all-time peaks. The PIE ratio for the Dow was, at that pOint, the lowest it had ever been since earnings for that Average have been recorded. Since last fall's lows, the Dow multiple has risen noticeably due to the combination of rising prices and lower earnings, but on a cyclical baSis, an astounding a mount of room rema ins on the ups ide. In addition, we think, there are grounds for optimism as to the future of corporate profits. As the recession bottoms, we think it axiomatic that the Gross National Product will rise in the second half of 1975 and on into 1976, at least in dollar terms. The question, of course, is what percentage will corporate profits constitute of that riSing GNP. Now, corporate profits as a percentage of GNP is a statistic that has behaved similarly in most economic cycles. The percentage has reached a low in each recession in the – -postwar' perlod'and'ha-s tend-edtoexpan&wtththeucceedingbusi.nes-sexpa nsion –GeneraHyjit– – has tended to peak out well in advance of recessions and has been a pretty fair leading indicator of such recessions. The following table shows the pre-recession high for profits as a percentage of GNP, the number of quarters lead on the beginning of the subsequent recession and the reces- sion lows for each of the five recorded postwar receSSions, plus the current one. Pre-Recession High No. of Recession Low Year-Qtr Profit as GNP Qtrs Lead Year-Qtr Profit as GNP Nov 1948-0ct 1949 1947-3 9.26 6 1949-4 7.10 July 1953-Aug 1954 1950-4 11.00 9 1953-4 4.60 July 1957-Apr 1958 1955-4 6.92 5 1958-1 4.55 May 1960-Feb 1961 1959-3 6.33 3 1961-1 4.85 Nov 1969-Nov 1970 1965-4 6.94 15 1970-4 3.70 1974-1975 1974-3 6.66 0 1975-1 4.40 On their face, the statistics do not present much grounds for optimism. The last four business expansions have produced similar peaks in the series, and most recessions have' produced similar lows. We think there are grounds for encouragement for two reasons, however. One is that profits will have probably bottomed out in the current recession at higher levels than the all-time lows reached at the bottom of the 1970 receSSion, and secondly, that on the expan sion into the third quarter of last year profits continued to expand as a percentage of GNP right up until the moment the economy turned down, rather than leading the downturn. – – 'It may well be a-sked, of cOUrse, why the profits percentage should'exparid-from the 4.5 – 6.9 range which has characterized it since the early 1950's. We think a justifica- tion can be made on the grounds that profits are undeniably understated, since years of inflation have rendered depreciation charges woefully inadequate. There is no way that current deprecia- tion allowances could cover the replacement cost of current plant. Under these circumstances, we can foresee distinct upward pressure on prices, and we have, indeed, seen an indication of this in the rise in commodity prices despite the obvious recessionary characteristics of the econ- omy during the first half of this year. We think this upward pressure could exert a long-term ex- pansionary force on profit margins and, ultimately, on profits and stock prices. Dow-Jones Industrials (1200 p.m.) 832.99 ANTHONYW. TABELL S & P Compo (1200 p.m.) 86.70 DELAFIELD, HARVEY, TABELL Cumulative Index (8/28/75) 486.67 AWT/jb No statement or expresSion of opmlon Or any olher motler herein contomed IS, or IS to be deemed to be, dlfectly or indirectly, on oHer or the soliCitation at an offer to buy or sell ony secvrlty referred 10 or menlloned The moTter IS presented merely for the conver,enC6 of Ihe subSCriber While we believe the sources of our information to be reliable, we In no way represen! or guorontee the accuracy Ihereof nor of the statements mude herein Any action to be token by the subscriber should be bosed an hiS own mvestlgollon and information Janney Montgomery Scott, Inc, 05 a corporation, and lIs officers or employees, may now hove, or may later Joke, pOSitiOnS or trodes m respect to ony securities mentioned m thiS or ony future Issue, and such posl'lon may be different from ony Views now or hereofter epressed In thiS or ony other Issue Janney Montgomery Scott, Inc, which IS registered With thc SEC os on Inves/ment adVisor, moy give odvlce to Its Inveslmenl odvuory and olher customers Independently of any statements mode In Ihls or In any other Issue Further mformotlon on any security mentioned here'n IS avollable on requesl