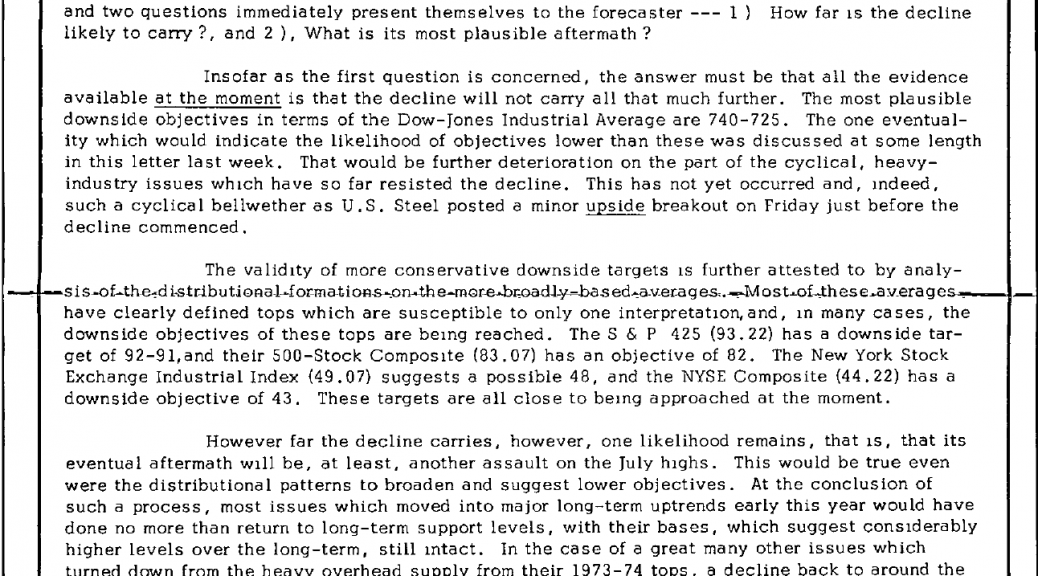 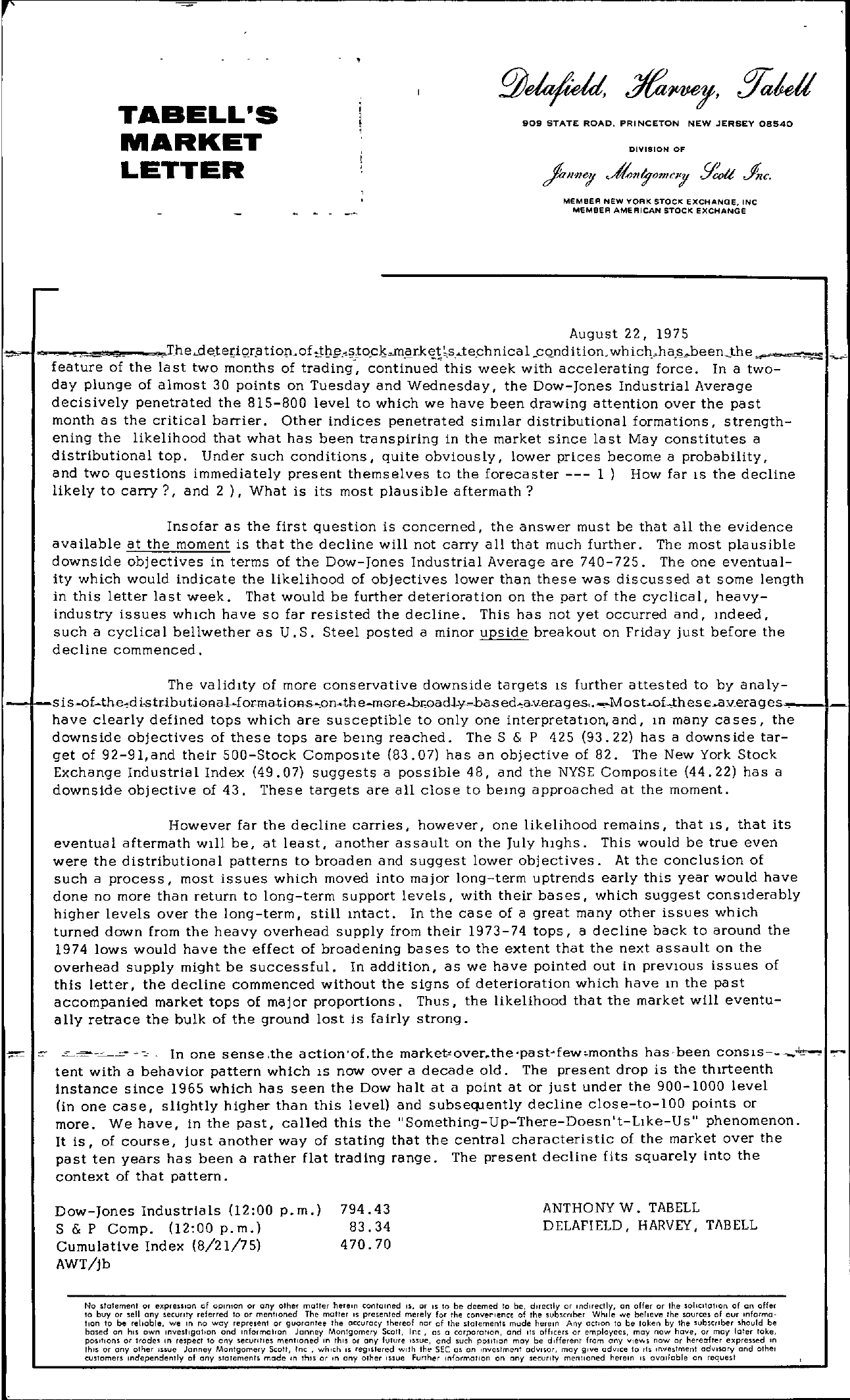 r , TABELL'S MARKET LETTER 909 STATE ROAD, PRINCETON NEW JERSEY 08540 DIVISION OF MEMBER NEW YORK STOCK EXCHANGE, INC MEMBEA AMERICAN STOCI( EXCHANGE August 22, 1975 .,.TheJleJeriQr.a tion.oftl1!'Joctm-',!Jk!'s,technicalcQndition. whichha.,;beenthe ..,, feature of the last two months of trading, continued this week with accelerating force. In a two- day plunge of almost 30 points on Tuesday and Wednesday, the Dow-Jones Industrial Average decisively penetrated the BI5-BOO level to which we have been drawing attention over the past month as the critical barrier. Other indices penetrated simllar distributional formations, strength- ening the likelihood that what has been transpiring in the market since last May constitutes a distributional top. Under such conditions, quite obviously, lower prices become a probability, and two questions immediately present themselves to the forecaster — I) How far IS the decline likely to carry, and 2 ), What is its most plausible aftermath Insofar as the first question is concerned, the answer must be that all the evidence available at the moment is that the decline will not carry all that much further. The most plausible downside objectives in terms of the Dow-Jones Industrial Average are 740-725. The one eventuality which would indicate the likelihood of objectives lower than these was discussed at some length in this letter last week. That would be further deterioration on the part of the cyclical, heavyindustry issues whIch have so far resisted the decline. This has not yet occurred and, mdeed, such a cyclical bellwether as U. S. Steel posted a minor upside breakout on Friday just before the decline commenced. The validIty of more conservative downside targets IS further attested to byanaly- – …..-.s i s-of-th-e,d i-str-ibuti 0lOa1-Ol'ma-tiOl'ls.,on…th e…mor-e.bl;Oadl-y-bas ed.a-v-8r-il g es,, 0 5 tof–th es e.a vera g ess 1 have clearly defined tops which are susceptible to only one interpretatlOn,and, m many cases, the downSide objectives of these tops are bemg reached. The S & P 425 (93.22) has a downside target of 92-91,and their 500-Stock ComposIte (B3.07) has an objective of B2. The New York Stock Exchange Industrial Index (49.07) suggests a possible 4B, and the NYSE Composite (44.22) has a downSide objective of 43. These targets are all close to bemg approached at the moment. However far the decline carries, however, one likelihood remains, that IS, that its eventual aftermath WIll be, at least, another assault on the July hIghs. This would be true even were the distributional patterns to broaden and suggest lower objectives. At the conclusion of such a process, most issues which moved into major long-term uptrends early this year would have done no more than return to long-term support levels, with their bases, which suggest conSIderably higher levels over the long-term, still mtact. In the case of a great many other issues which turned down from the heavy overhead supply from their 1973-74 tops, a decline back to around the 1974 lows would have the effect of broadening bases to the extent that the next assault on the overhead supply might be successful. In addition, as we have pointed out in prevIOus issues of this letter, the decline commenced without the signs of deterioration which have m the past accompanied market tops of major proportions. Thus, the likelihood that the market will eventually retrace the bulk of the ground lost is fairly strong. — ec '—-, In one sense ,the action'oLthe market'over.thepast-few,months has-been consls- tent with a behavior pattern which IS now over a decade old. The present drop is the thIrteenth instance since 1965 which has seen the Dow ha It at a point at or just under the 900-1000 level (in one case, slightly higher than this level) and subseqJenUy decline close-to-IOO pOints or more. We have, in the past, called this the Something-Up-There-Doesn't-Llke-Us phenomenon. It is, of course, just another way of stating that the central characteristic of the market over the past ten years has been a rather flat trading range. The present decline fits squarely into the context of that pattern. Dow-Jones Industrials (1200 p. m.) S & P Compo (1200 p.m.) Cumulative Index (B/21/75) AWT/jb 794.43 B3.34 470.70 ANTHONY W. TAB ELL DELAFIELD, HARVEY, TIIBELL No statement or expression of opinion or any other moIler here'n tonlomed Ii, or IS to be deemed to be, directly or 'ndlrectly, on offer or the sollc,lollon of on offer 10 buy or sell any security referred 10 or mentioned The molter I presented merely for the converlenCE of the subSCriber While we believe the sources of our information to be reliable, we In no way represent or guarantee the occurocy thereof nor of the statements mude herein Any adlOn to be token by the 5ubscrlber should be based on hiS own Investlgailon and Informohon Janney Montgomery Scott, Inc, as a corporation, and Its officers or employees, may now have, or may later take, pOSitIOns or trodes In respect to any seCUrities mentioned In thiS or any future Issue, and such position moy be different from any vlev..s now or hereafter expressed In thiS or any other Issue Janney Montgomery Scott, Inc, whICh IS registered With the SEC as on Investment adVisor, may give adVice to ItS Investment adVisory and other customers rndependently of any statements made In thIS or In any other Issue Further Informatron on ony securrty mentioned herein IS aVailable on request L –