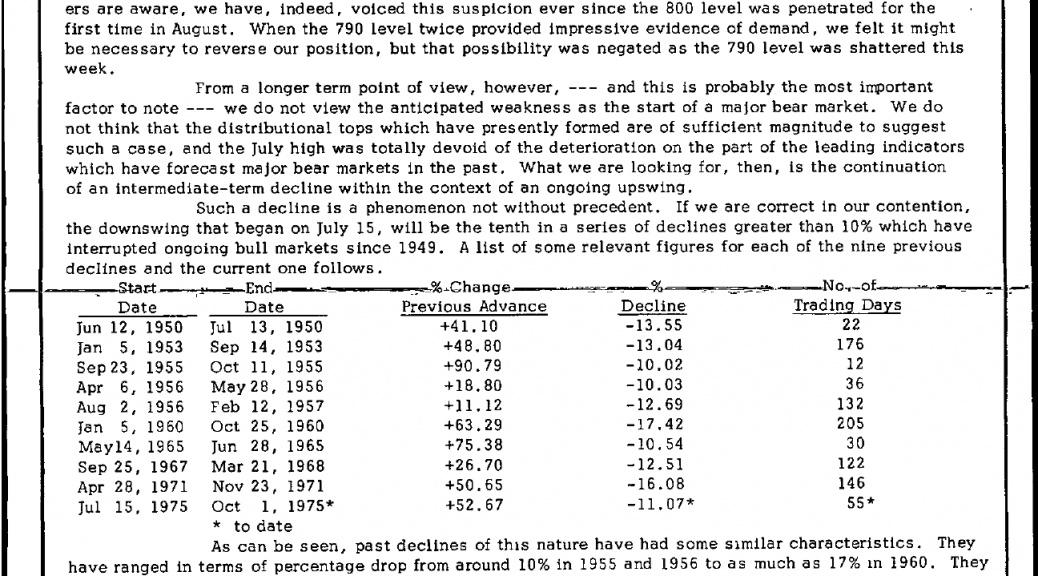 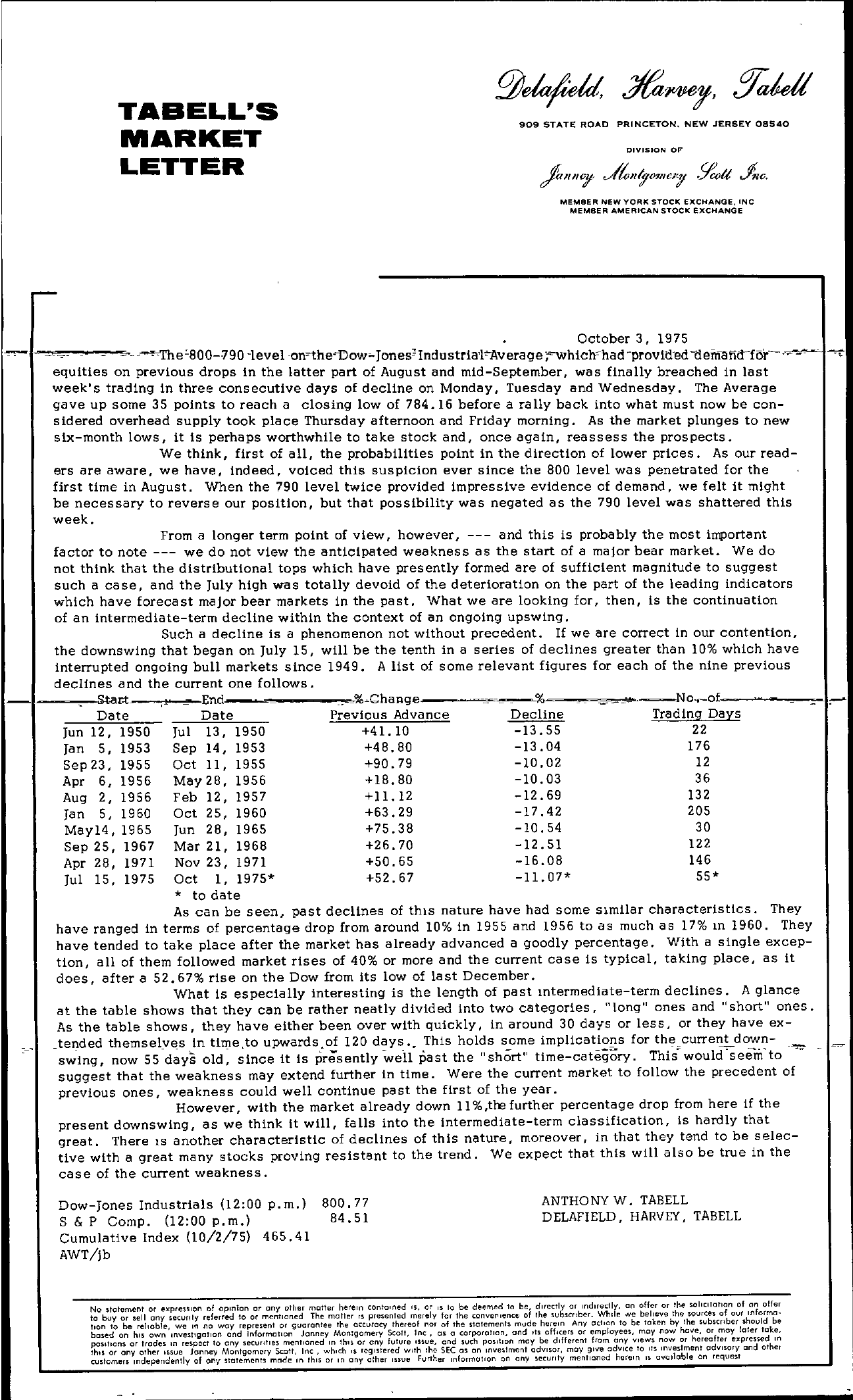 TABELL'S MARKET LETTER 909 STATE ROAD PRINCETON, NEW JERSEY 08540 DIVISION OF MEMBER NEW YORK STOCK EXCHANGE, INC MEMBER AMERICAN STOCK EXCHANGE October 3, 1975 I-',,–'- -The'800-790 -level -onthe–Dow Jones' Industrla'lo-Average ;whlclFhad -provltted -demafitnor– equities on previous drops In the latter part of August and mid-September, was finally breached in last week's trading In three consecutive days of decline on Monday, Tuesday and Wednesday. The Average gave up some 35 paints to reach a closing low of 784.16 before a rally back into what must now be con- sidered overhead supply took place Thursday afternoon and Friday morning. As the market plunges to new six-month lows, it Is perhaps worthwhile to take stock and, once again, reassess the prospects. We think, first of all, the probabilities point in the direction of lower prices. As our read- ers are aware, we have, indeed, voiced this suspicion ever since the 800 level was penetrated for the first time in August. When the 790 level twice provided impressive evidence of demand, we felt It might be necessary to reverse our position, but that possibility was negated as the 790 level was shattered this week. From a longer term point of view, however, — and this is probably the most imPortant factor to note — we do not view the anticipated weakness as the start of a major bear market. We do not think that the distributional tops which have presently formed are of sufficient magnitude to suggest such a case, and the July high was totally devoid of the deterioration on the part of the leading indicators which have forecast major bear markets in the past. What we are looking for, then, is the continuation of an intermediate-term decline within the context of an ongoing upswing. Such a decline is a phenomenon not without precedent. If we are correct in our contention, the downswing that began on July 15, will be the tenth in a series of declines greater than 10 which have Interrupted ongOing bull markets since 1949. A list of some relevant figures for each of the nine previous declines and the current one follows. Star-t Endl .,Ghallge ..,.,….–…..,.,..,,,,,,.–No.,ofE I,.- Date Jun 12, 1950 Jan 5, 1953 Sep 23, 1955 Apr 6, 1956 Aug 2, 1956 Jan 5, 1960 May14, 1965 Sep 25, 1967 Apr 28, 1971 Jul 15, 1975 Date Previous Advance Decline Trading Days Jul 13, 1950 41. 10 -13.55 22 Sep 14, 1953 48.80 -13.04 176 Oct 11, 1955 90.79 -10.02 12 May28, 1956 18.80 -10.03 36 Feb 12, 1957 II. 12 -12.69 132 Oct 25, 1960 63.29 -17.42 205 Jun 28, 1965 75.38 -10.54 30 Mar21,1968 26.70 -12.51 122 Nov 23, 1971 50.65 -16.08 146 Oct 1, 1975 52.67 -11.07 55 to date As can be seen, past declines of thiS nature have had some Similar characteristics. They have ranged in terms of percentage drop from around 10 In 1955 and 1956 to as much as 17 m 1960. They have tended to take place after the market has already advanced a goodly percentage. With a single excep- tion, all of them followed market rises of 40 or more and the current case is typical, taking place, as it does, after a 52.67 rise on the Dow from its low of last December. What is especially Interesting is the length of past mtermediate-term declines. A glance at the table shows that they can be rather neatly divided into two categories, long ones and short ones. As the table shows, they have either been over with quickly, in around 30 days or less, or they have extended themselves in time.to upwards.of 120 days .. This holds some implications for theGurredown -S';lng, now 55 days old, since it is presently weh past the short time-category. This would'seem'to suggest that the weakness may extend further in time. Were the current market to follow the precedent of previous ones, weakness could well continue past the first of the year. However, with the market already down 11 ,the further percentage drop from here if the present downswing, as we think It will, falls into the intermediate-term claSSification, is hardly that great. There IS another characteristic of declines of this nature, moreover, in that they tend to be selec- tive with a great many stocks proving resistant to the trend. We expect that this will also be true in the case of the current weakness. Dow-Jones Industrials (12 00 p. m.) S & P Compo (1200 p.m.) Cumulative Index (10/2/75) 465.41 AWT/jb 800.77 84.51 ANTHONY W. TABELL DELAFIELD, HARVEY, TABELL No statement or expression of opinion or any other motter herein contolned IS, or IS to be deemed to be, directly or indirectly, on offer or the soliCitation of on offer to buy or sell ony security referred to or mentioned The mOiler IS presented merely for Ihe conver,ence of the subscriber. Wflile e believe the sources of our Informo- hon 10 be relloble, we In no way represent or guarantee the accuracy thereof nor of the statements mude herem Any actIon to be taken by the subscflber should be based an hIS own mveSl1gatlon and Information Janney Mangomery Scott, Inc, as a corporatIon, and Its offICers or employees, may now have, or may laler take, posItions or trades In respect to any SecUr,eS mentIoned In thIS or any future Issue, and such posltJon may be dolferent from any vIews now or hereafter expressed In thIS or any other Issue Janney Montgomery Scott, Inc, whICh IS regIstered WIth the SEC 05 on Investment adVIsor, may gIve adVice to Its Investment adVIsory and othel customers Independently of any statements made ,n thIS or In any ather Issue Further informatIon on any security mentIoned hereIn IS avaIlable on request