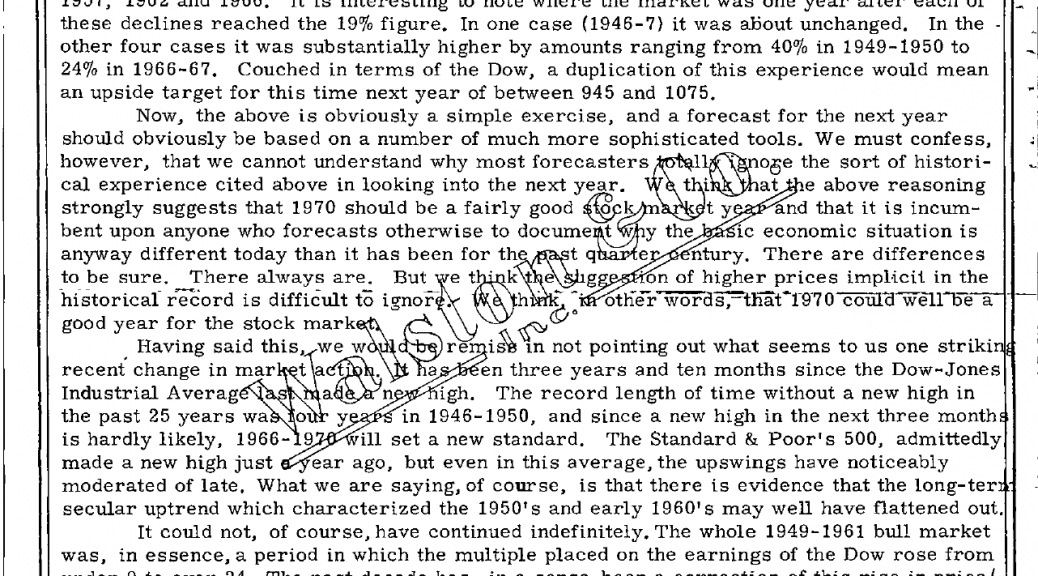 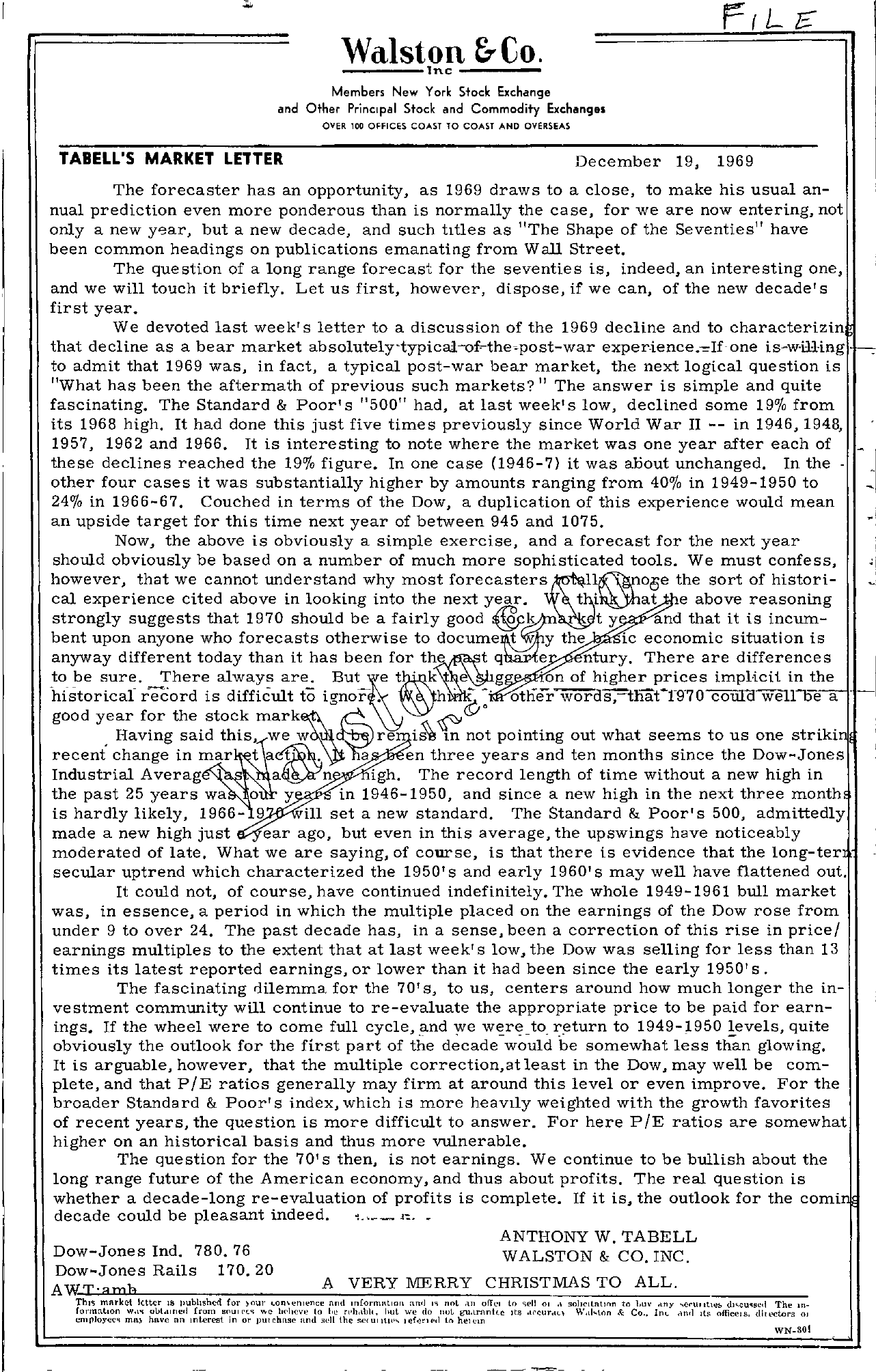 Walston &Co. ———lnc——— Members New York Stock Exchange and Other PrincIpal Stock and Commodity Exchango. OVER 100 OFFICES COAST TO COAST AND OVERSEAS TABELL'S MARKET LETTER December 19, 1969 The forecaster has an opportunity, as 1969 draws to a close, to make his usual an- nual prediction even more ponderous than is normally the case, for we are now entering, not only a new y'3ar, but a new decade, and such htles as The Shape of the Seventies have been common headings on publications emanating from Wall Street. The question of a long range forecast for the seventies is, indeed, an interesting one, and we will touch it briefly. Let us first, however, dispose, if we can, of the new decade's first year. We devoted last week's letter to a discussion of the 1969 decline and to characterizin that decline as a bear market experience.-Ifone is-w-illing to admit that 1969 was, in fact, a typical post-war bear market, the next logical question is What has been the aftermath of previous such markets The answer is simple and quite fascinating. The Standard & Poor's 500 had, at last week's low, declined some 19 from its 1968 high. It had done this just five times previously since World War II — in 1946,1948, 1957, 1962 and 1966. It is interesting to note where the market was one year after each of these declines reached the 19 figure. In one case (1946-7) it was about unchanged. In the – other four cases it was substantially higher by amounts ranging from 40 in 1949-1950 to 24 in 1966-67. Couched in terms of the Dow, a duplication of this experience would mean an upside target for this time next year of between 945 and 1075. Now, the above is obviously a simple exercise, and a forecast for the next year should obviously be based on a number of much more sophisticated tools. We must confess, however, that we cannot understand why most the sort of histori- cal experience cited above in looking into the next year. W)0nstrongly suggests that 1970 should be a fairly good t ty e above reasoning and that it is incum- bent upon anyone who forecasts otherwise to docume1j\t the ic economic situation is anyway different today than it has been for to be sure. There always are. But e 'historicaf record is difficult to ignor. Wh' –Iql\aPte ntury. There are differences g 'on of higher prices impl,icit in the otner words, th'a'n-970 coillc)'wello-e a good year for the stock Having said this, we w re is'S ill not pointing out what seems to us one striki recent change in mar t a en three years and ten months since the Dow-Jones Industrial Averag igh. The record length of time without a new high in the past 25 years wa 0 y in 1946-1950, and since a new high in the next three month is hardly likely, 1966- 9 set a new standard. The Standard & Poor's 500, admittedly made a new high just ear ago, but even in this average, the upswings have noticeably moderated of late. What we are saying, of course, is that there is evidence that the long-ter secular uptrend which characterized the 1950' s and early 1960' s may well have flattened out. It could not, of course, have continued indefinitely. The whole 1949-1961 bull market was, in essence, a period in which the multiple placed on the earnings of the Dow rose from under 9 to over 24. The past decade has, in a sense, been a correction of this rise in price I earnings multiples to the extent that at last week's low, the Dow was selling for less than 13 times its latest reported earnings, or lower than it had been since the early 1950' s. The fascinating dilemma for the 70' s, to us, centers around how much longer the in- vestment community will continue to re-evaluate the appropriate price to be paid for earn- ings. If the wheel were to come full cycle, and we to return to 1949-1950 levels, quite obviously the outlook for the first part of the decade would be somewhat less than glowing. It is arguable, however, that the multiple correction,atleast in the Dow, may well be com- plete, and that pIE ratios generally may firm at around this level or even improve. For the broader Standard & Poor's index, which is more heaVily weighted with the growth favorites of recent years, the question is more difficult to answer. For here PIE ratios are somewhat higher on an historical basis and thus more vulnerable. The question for the 70's then, is not earnings. We continue to be bullish about the long range future of the American economy, and thus about profits. The real question is whether a decade-long re-evaluation of profits is complete. If it is, the outlook for the comi decade could be pleasant indeed. ,,' Dow-Jones Ind. 780.76 Dow-Jones Rails 170.20 AW.Tamb ANTHONY W. TABELL WALSTON & CO. INC. A VERY MERRY CHRISTMAS TO ALL, Thl; mnrket kttcr IS pubhshcd for )our l.on\emence and mformatlOn and 1'1 not iln ofT'l to jell 01 ,\ soliCitation to l,uv .my 'CI'UllttC& dl'CU'lsl'd The in- formatIOn W.I'! obt,I1nt'rI from sru1r('l v.e I'hcve to I.e rt'h,lblt, hut we do nut. gu.lrnnt!.(' Its \\',11..1011. & Co.. InL ,mrl Ill'. officels, dhl'Ctors OJ employec'! rna. have an mterest m or PUI chase and sl'll thc SCI UIIlw I efer! i'tl lo hell'1Il WNsot